2023 Outlook: A Deep Dive into CNR’s Economic and Investment Outlook

For most of 2022, City National Rochdale had predicted that economic volatility would remain higher for longer periods of time. While maintaining our "higher for longer" thesis during our December market update, there was also a note of optimism for 2023.

However, D'Alessandro also anticipates that 2023 will be a “tale of two years," with the first half likely to see a mild recession and continued market volatility, and the second half seeing return to positive territory for both equity and fixed income investments.

Looking Back at the 2022 Economic Picture

Reviewing 2022, D'Alessandro explained that this was one of the most challenging markets experienced in years, with the traditional 60/40 balanced portfolio seeing its worst returns in half a century.

The CNR team was able to predict several important trends in 2022, such as anticipating the equity correction, and we de-risked portfolios by selling non-U.S. equities and focusing on quality U.S. stocks.

In addition, CNR avoided investing in speculative tech and cryptocurrency but included other alternative investments. We didn't anticipate the pace of inflation and interest rate increases, but neither did other analysts across the financial industry.

Also unexpected were the aggressive actions taken by Russian President Vladimir Putin and the magnitude of negative fixed income returns.

CNR Speedometers®, our forward-looking indicators for the next six to nine months, are all yellow or red this month. However, our team provided reassurance that these outlooks aren't as negative as they first appear.

He also pointed to an encouraging note: The Speedometers inflation dial has moved from red to yellow, reflecting CNR's belief that inflation has peaked. While still elevated, the inflationary trend over the next year will likely be lower, he said, making it less of a headwind to economic growth. 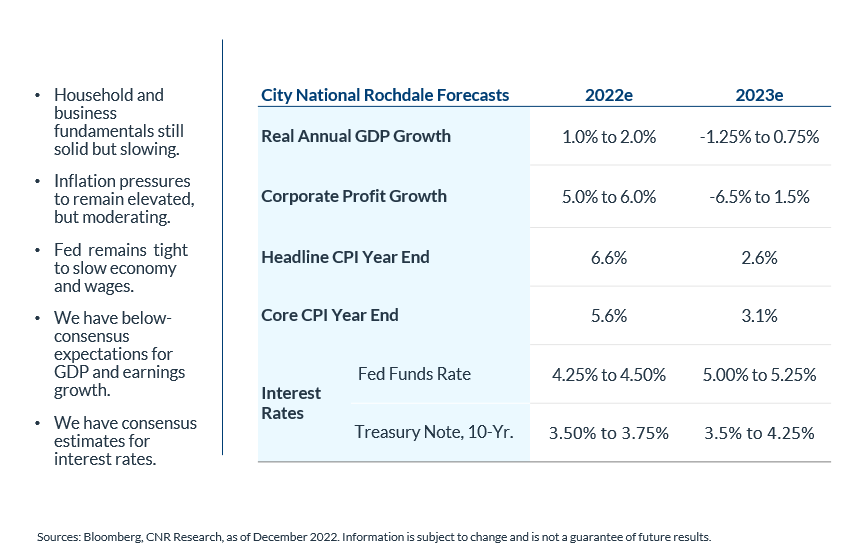 The CNR team anticipates GDP to pivot around zero for 2023 but believes the strong fundamentals in household and business balance sheets will help the economy weather what they anticipate to be a 60% chance of a mild recession.

The U.S. currently has the strongest economy in the world, which is one reason CNR has pulled all allocations from Europe. CNR's concern is that Europe will continue to experience high inflation, high unemployment and high energy costs. China's increasing state control, property bubble and difficulties with COVID-19 policies contribute to the concern about investing there.

The Fed's Battle With Inflation Continues

While inflation has shown signs of cooling recently, a prime contributor that has concerned the U.S. Federal Reserve is wage growth.

“The Fed has been very transparent that they want wages to come down to a range that's consistent with their inflation target of 2%," said Paul Single, CNR managing director, senior economist and senior portfolio manager. “If the labor market doesn't soften, the Fed will keep rates higher for longer." 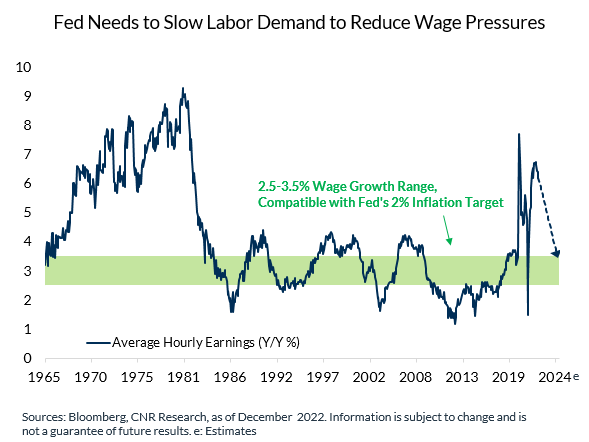 Inflation pressures are expected to moderate in 2023, especially with food inflation coming down. Higher prices and higher financing costs are likely to slow consumer spending, too.

“Our view is that inflation is heading in the right direction, but it will take time to come down enough," said Single. 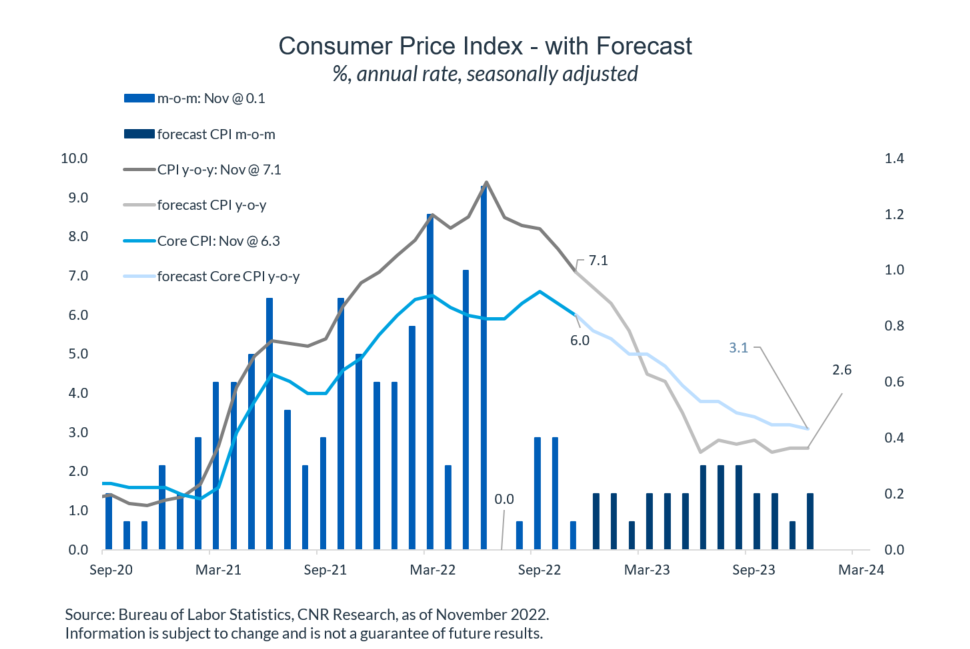 Investors have found some opportunities over the past year that should extend into 2023. Yields have been substantially higher on some fixed income assets. Investors can take advantage of higher short-term rates on investment grade bonds that have been close to 5% for a year and provide income with less risk, said Charles Luke, managing director and co-director of fixed income for City National Rochdale.

Owning high yield bonds is still beneficial over time, too, Luke said. CNR's team has also found success investing in alternative assets for more yield, such as direct lending, rail car leasing and reinsurance contracts, all of which are typically more stable than some other investments.

“What we're illustrating here is that opportunities for investors in bond markets have significantly improved through the year," said Luke. “With these elevated returns, we do expect bond returns to increase over the next three to five years." 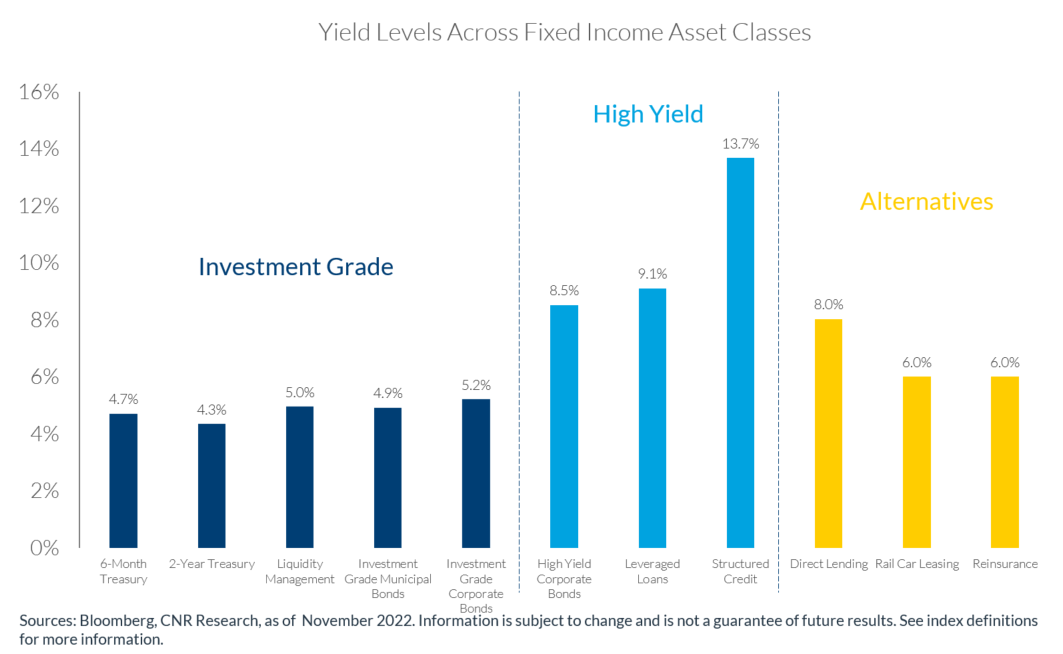 Specific asset allocation decisions will depend on whether the U.S. economy is in a slow growth period or a mild recession. But over the long term, high-yield bonds are more appealing, Luke said. In a mild recession, short-term bonds and two-year Treasury notes are options to consider. 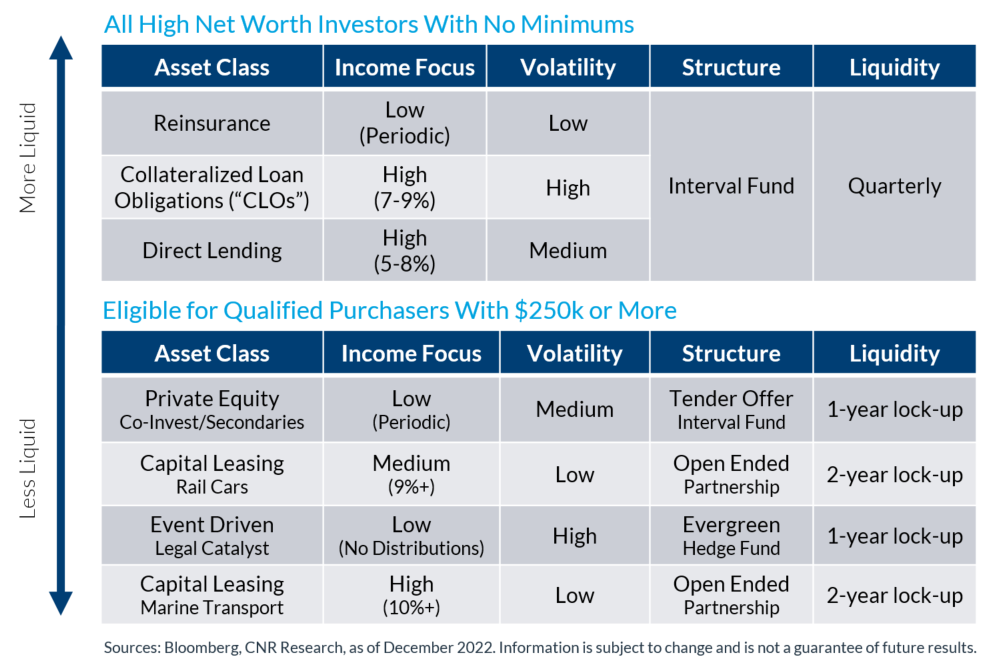 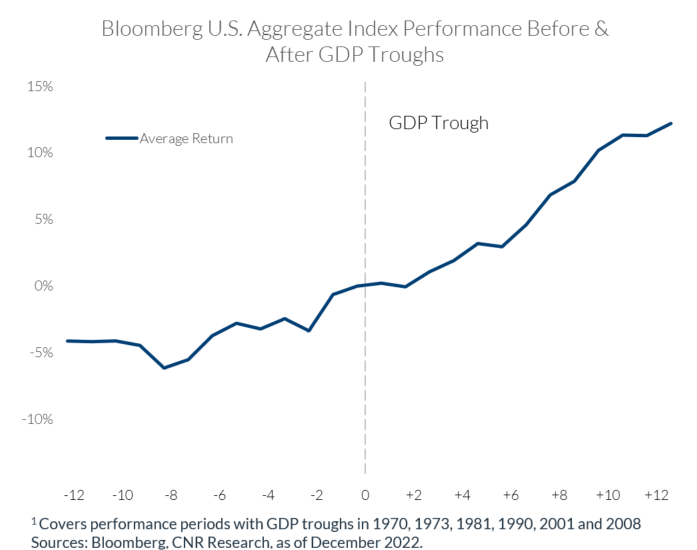 While equity valuations have adjusted, consensus earnings estimates still are not reflecting a more challenging economic outlook and negative revisions to forecasts could be a source of further downside in the near term.

Among the other critical issues CNR is watching, that could have a negative impact on equity markets in 2023, is the possibility that interest rates go even higher and the potential for further exogenous shocks. 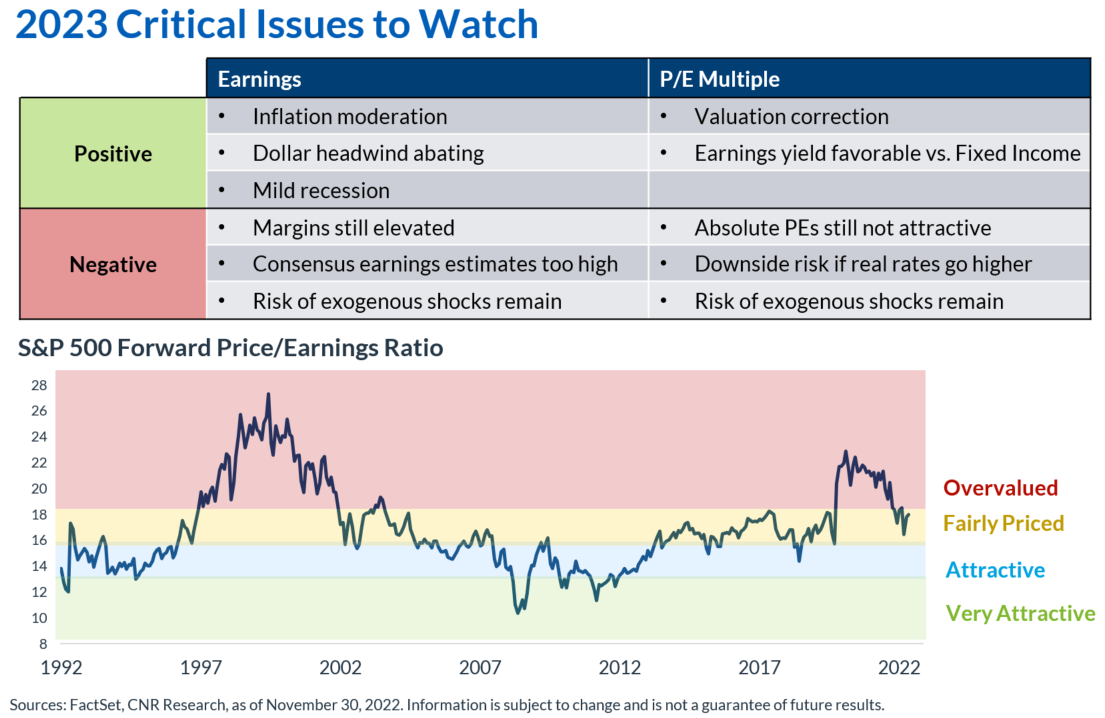 Among three likely 2023 scenarios - slow growth, a mild recession, or a normal recession - CNR believes a mild recession is the most likely. The leadership team is particularly watching labor and wages as an indicator for the economy in 2023, along with geopolitical risks.

“For the Fed to succeed in its battle against inflation, we need to see a sustainable decline in wage growth to about 2.5% to 3.5% wage growth," said Galvin. “If this proves challenging, the tightening process may have to be sustained and go higher."

While history and research provide optimism about future returns, investors should expect volatility and perhaps further downside risk in the near term.

“Rest assured, if a severe recession risk goes up, as fiduciaries with a prudent responsibility to manage your capital, capital preservation is still as important as capital appreciation and we have a plan," said Galvin.

Certain statements contained herein may constitute projections, forecasts and other forward looking statements, which do not reflect actual results and are based primarily upon a hypothetical set of assumptions applied to certain historical financial information.

Certain information has been provided by third-party sources and, although believed to be reliable, it has not been independently verified and its accuracy or completeness cannot be guaranteed.

Any opinions, projections, forecasts, and forward-looking statements presented herein are valid as on the date of this document and are subject to change.

There are inherent risks with equity investing. These risks include, but are not limited to stock market, manager, or investment style. Stock markets tend to move in cycles, with periods of rising prices and periods of falling prices.

As with any investment strategy, there is no guarantee that investment objectives will be met and investors may lose money.

Diversification does not ensure a profit or protect against a loss in a declining market. All investing is subject to risk, including the possible loss of the money you invest.

Returns include the reinvestment of interest and dividends.

Indexes are unmanaged and investors are not able to invest directly into any index.

The mention of a specific security is not a recommendation to buy, or solicitation to sell such security.

S&P 500 Index: The S&P 500 Index, or Standard & Poor’s 500 Index, is a market-capitalization-weighted index of 500 leading publicly traded companies in the U.S. It is not an exact list of the top 500 U.S. companies by market cap because there are other criteria that the index includes.

Muni Bond: A municipal bond is a debt security issued by a state, municipality or county to finance its capital expenditures, including the construction of highways, bridges or schools. These bonds can be thought of as loans that investors make to local governments.

The Bloomberg Aggregate Bond Index: "the Agg" is a broad-based fixed-income index used by bond traders and the managers of mutual funds and exchange-traded funds (ETFs) as a benchmark to measure their relative performance. U.S. Treasury Yield Curve: refers to a line chart that depicts the yields of short-term Treasury bills compared to the yields of long-term Treasury notes and bonds.

Consumer Price Index (CPI): is a measure that examines the weighted average of prices of a basket of consumer goods and services, such as transportation, food, and medical care.

MSCI Emerging Asia PE: The MSCI Emerging Markets Index is a selection of stocks that is designed to track the financial performance of key companies in fast-growing nations. It is one of a number of indexes created by MSCI Inc., formerly Morgan Stanley Capital International.

Global Equity Markets: a global market in which shares of companies are issued and traded, either through exchanges or over-the-counter markets.

6M T-Bills: The 6 Month Treasury Bill Rate is the yield received for investing in a US government issued treasury bill that has a maturity of 6 months.

2-Year Treasury Notes: negotiable debt obligations issued by the U.S. Treasury Department (other than a Stripped Treasury Security) having a remaining maturity of more than one year but not more than two years.

Liquidity Management: The liquidity index calculates the days required to convert a company's trade receivables and inventory into cash.

All investing is subject to risk, including the possible loss of the money you invest. As with any investment strategy, there is no guarantee that investment objectives will be met, and investors may lose money. Diversification may not protect against market risk or loss. Past performance is no guarantee of future performance.

This information is not intended as a recommendation to invest in a particular asset class, strategy or product.

The information presented is for illustrative purposes only and based on various assumptions that may not be realized. No representation or warranty is made as to the reasonableness of the assumptions made or that all assumptions used have been stated or fully considered.

References to indexes and benchmarks in hypothetical illustrations of aggregate returns do not reflect the performance of any actual investment. Investors cannot invest in an index, and such returns do not reflect the deduction of the advisor's fees or other trading expenses. There can be no assurance that current investments will be profitable. Actual realized returns will depend on, among other factors, the value of assets and market conditions at the time of disposition, any related transaction costs and the timing of the purchase. Indexes and benchmarks may not directly correlate or only partially relate to portfolios, as they have different underlying investments and may use different strategies or have different objectives than our strategies or funds.