The investment leaders continue to expect corporate earnings to rebound by 20 percent to 40 percent next year but noted that equity valuations are high.

The team expects Congress to craft a new stimulus agreement, which would include extended unemployment benefits for millions of Americans who have lost jobs amid the coronavirus pandemic, in the coming few weeks.

“The failure to approve a new stimulus package and extend unemployment benefits was disappointing, and we think this failure will slow down the recovery. But we don't think it will cause a return back into recession, said Garrett D'Alessandro, CEO of City National Rochdale, the bank's investment advisory organization, during the team's weekly market update.

“Consumer confidence is being diminished or shaken not just because of the failure to extend the stimulus and the unemployment benefits, but also because of the lack of a cohesive health plan, social unrest and a host of factors," he said. "And it's this lack of confidence more than anything that is impeding the progression of the recovery or the resumption of our modest growth."

The labor picture should continue to recover, albeit at a slower pace, with unemployment likely to hit 9 percent by year end, D'Alessandro said.

More small and medium-sized businesses will fail as a result of the pandemic, he said, adding that a mismatch between lost jobs and the skills needed in high-tech industries will lead to permanent job losses.

Data from multiple sources, including The COVID Tracking Project, show ongoing declines in hospitalizations and a recent plateau in coronavirus fatalities. As of Aug. 15, no states appeared to be in the "red zone" category marked by increasing hospitalizations and high positive test rates, as most of the country progressed toward reaching targets necessary to reopen their economies, D'Alessandro said. 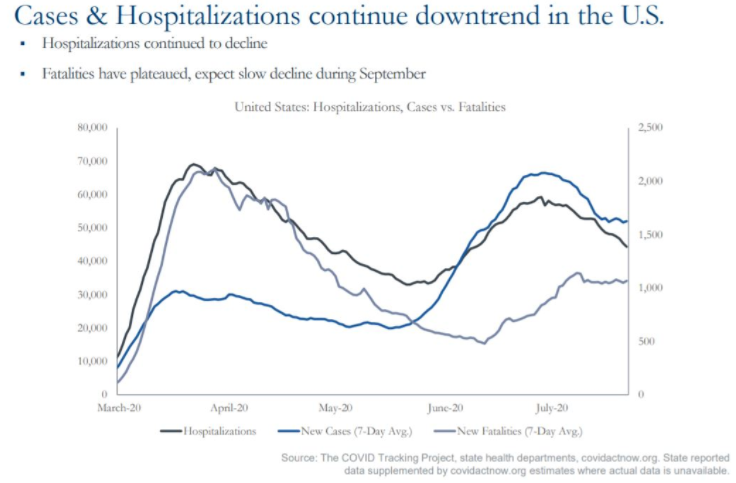 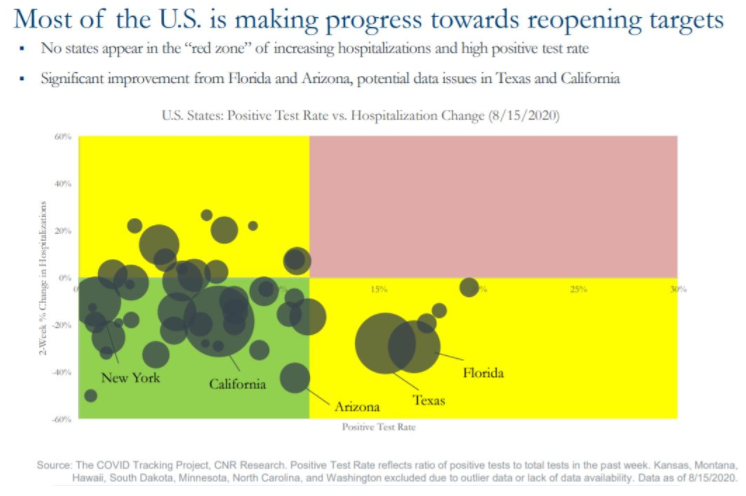 The investment leaders continue to expect corporate earnings to rebound by 20 percent to 40 percent next year but noted that equity valuations are high. A stock market correction "wouldn't surprise us," D'Alessandro said. Rochdale's portfolio managers always focus on managing risk to principal, he added.

“Retail sales have rebounded strongly from the low levels seen in April," City National Rochdale Chief Investment Officer Tom Galvin said, noting that consumers are spending money on goods, particularly those related to nesting and home improvement rather than vacations and travel.

The retail growth rate has slowed recently, however, and if Washington doesn't approve another effective stimulus package soon, "we would expect growth will slow further and impede spending through the end of the year," Galvin said. 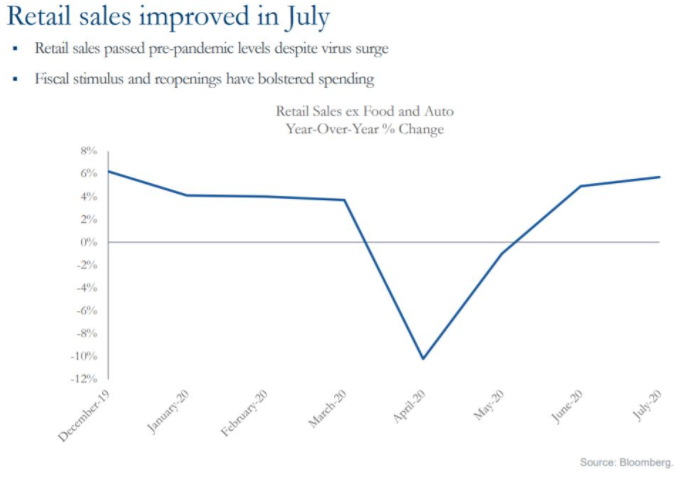 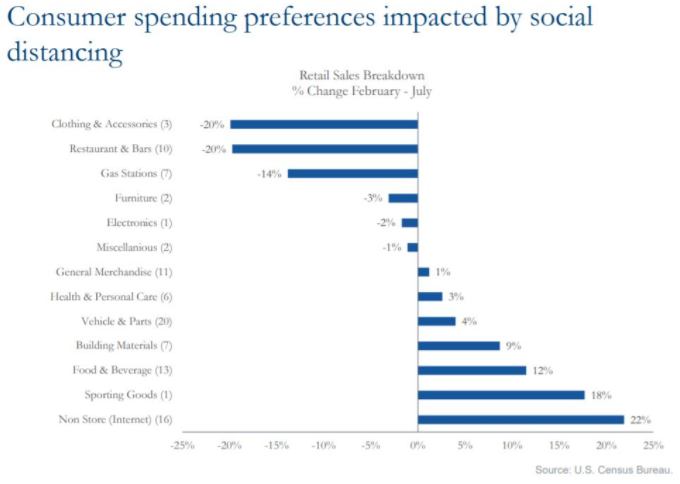 The team expects consumers to remain resilient, D'Alessandro said. Walmart and Target have started to expand store hours, indicating some confidence that consumers are starting to resume a semblance of normal activity and learning to live with the pandemic.

School closures, however, have had a significant effect on the economy, with childcare problems as a top reason for work loss and closed schools presenting a hurdle for the job market, D'Alessandro said, citing a U.S. Census Household Pulse Survey.

Citing multiple sources, he noted that 66 percent of U.S. school districts are starting the new academic year with remote learning only, with 16 percent using hybrid models and another 16 percent offering full, in-person learning for all students. 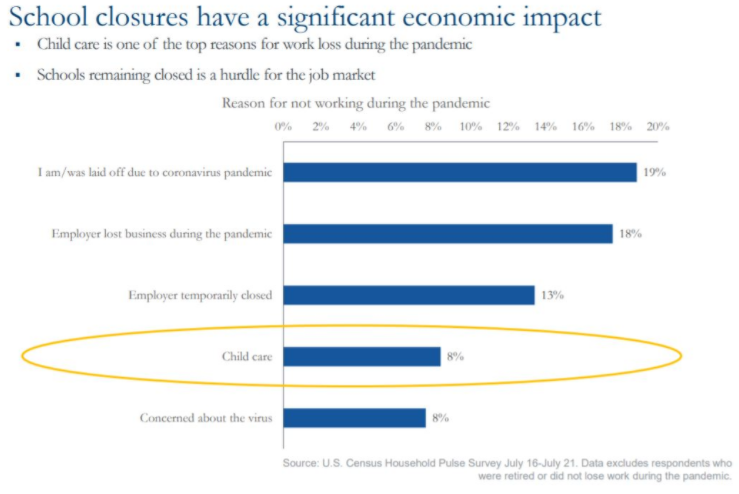 In the positive column, D'Alessandro cited a McKinsey & Co. report that documented a nearly $7 billion global investment in developing 250 coronavirus vaccine candidates, along with new processes that accelerate vaccine creation.

Manufacturers are expanding capacity now, even though U.S. regulators haven't yet approved a vaccine. Because it takes months to ramp up, a new vaccine is unlikely to become widely available before 2021, he said. 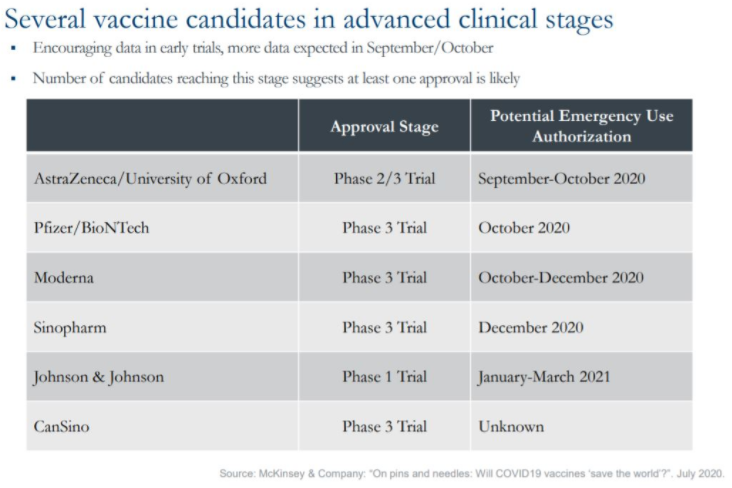 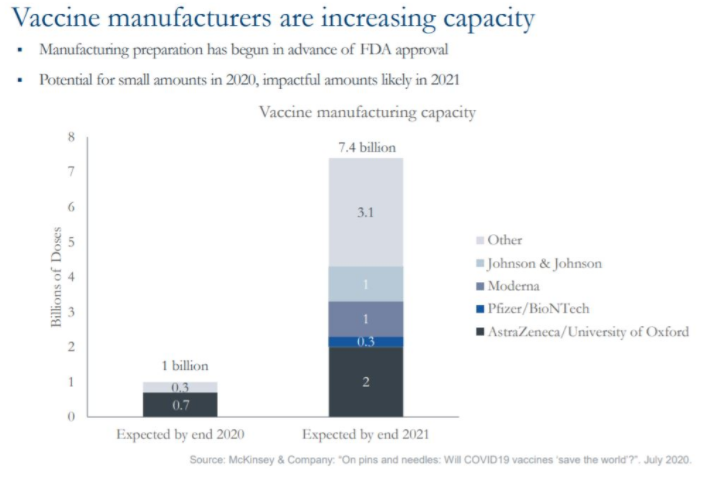 The market tends to perform better in election years when the incumbent party wins but does slightly better the following year when a challenger wins, Galvin noted, citing Ned Davis Research and S&P Dow Jones Indices. 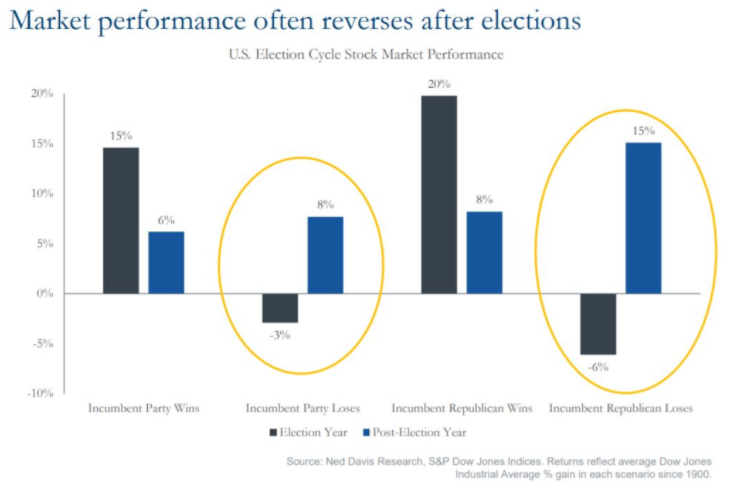 Based on Biden's proposals. his victory could result in higher personal income tax rates, increased Social Security and Medicare taxes for high earners and higher corporate income taxes, among other changes.

Biden's proposed 28 percent corporate income tax — up from the current 21 percent — could cause an 8 percent to 11 percent hit to S&P 500 earnings and limit plans for company hiring and investments, Galvin said, noting that this possibility probably isn't fully reflected in current equity prices. 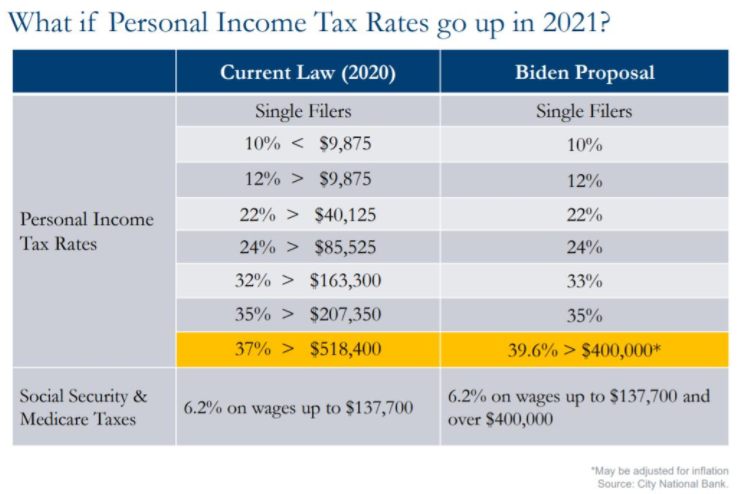 "If there is a Democratic win, taxes could significantly increase next year," said Jeffay Chang, a City National Bank trust advisor. He recommended that investors talk with their tax and portfolio advisors about possible strategies to limit the impact on their finances.

Clients might consider deferring compensation in 2021 and beyond to limit their tax burden should rates increase, and small business owners might consider exploring cash benefit defined compensation plans that would allow them to make higher contributions to employee accounts and, at the same time, take bigger deductions, Chang said.

Investors could also consider deferring capital losses to 2021 to reduce next year's tax bill, accelerating bonuses or other income this year while the tax rate is lower or exercising certain company stock options this year, he said.

Rochdale advisors also are talking to clients about converting traditional investment retirement accounts to Roth IRAs this year to reduce exposure to higher income tax rates. Under the right circumstances — a 20-year retirement time horizon and using money from outside the IRA to pay conversion-related taxes — investors could realize significantly more at retirement with this strategy, Chang said. 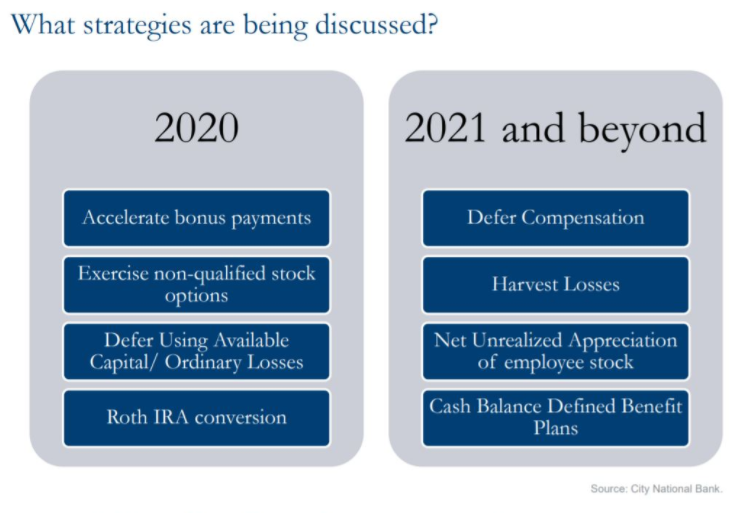 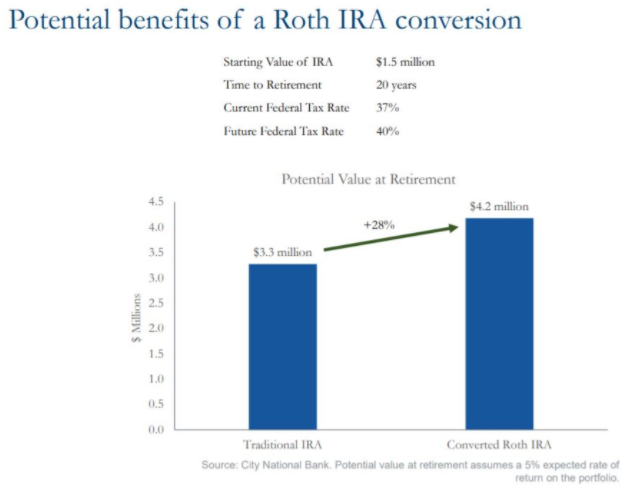 Portfolio manager Rachael Crane noted that with highly liquid assets such as Treasury bonds at historically low yields, investors might consider allocating part of their holdings to illiquid strategies that can boost income. While these alternative assets may prove more volatile short-term, they can provide long-term benefits, she said, citing multiple data sources. 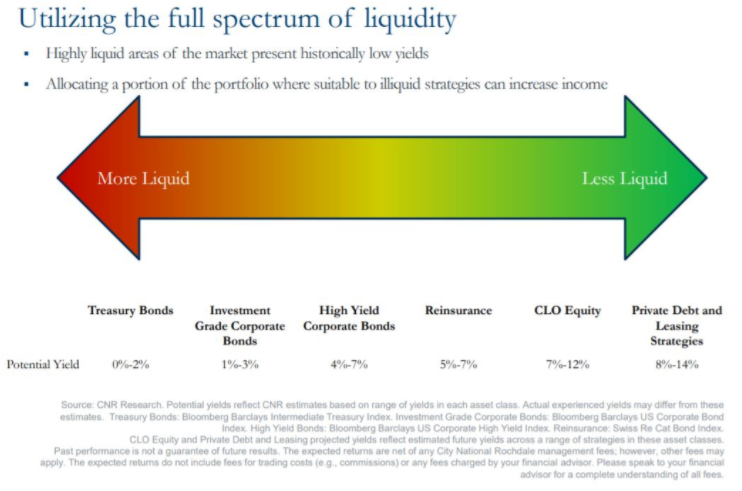 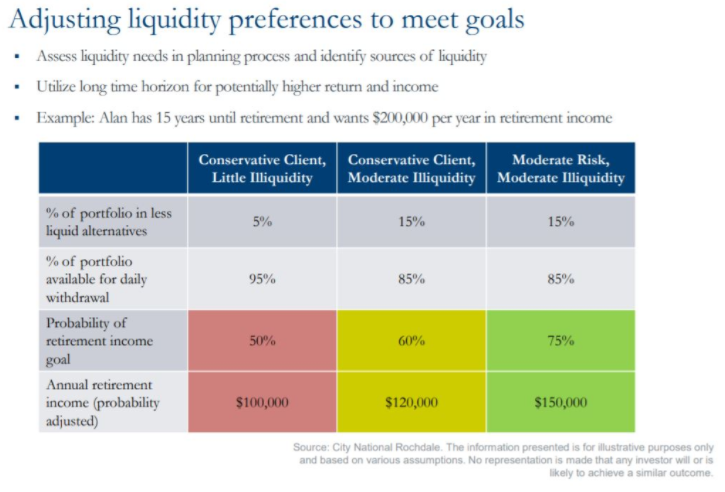 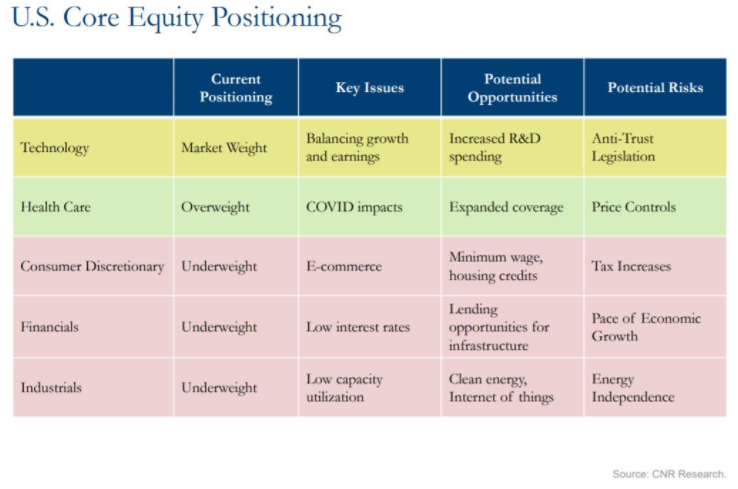 Biden's proposed tax and policy changes, including potential anti-trust policies, could make a significant impact on tech firms, although the industry's strong non-cyclical nature should cushion the hit, Galvin said.

“The momentum for either taking antitrust actions against the tech titans or rewriting laws that have fostered the growth of the internet and e-commerce would probably take a couple of years to unfold but could hurt stock prices," he said.

While there's been a rush to high-quality tech firms during the pandemic and a correction is possible, the bigger titans' valuations "aren't all that bad" given strong company fundamentals, Galvin said.

The healthcare industry, meanwhile, could benefit from higher demand if a Medicare-type plan for all citizens materializes under a potential Biden administration, he said. 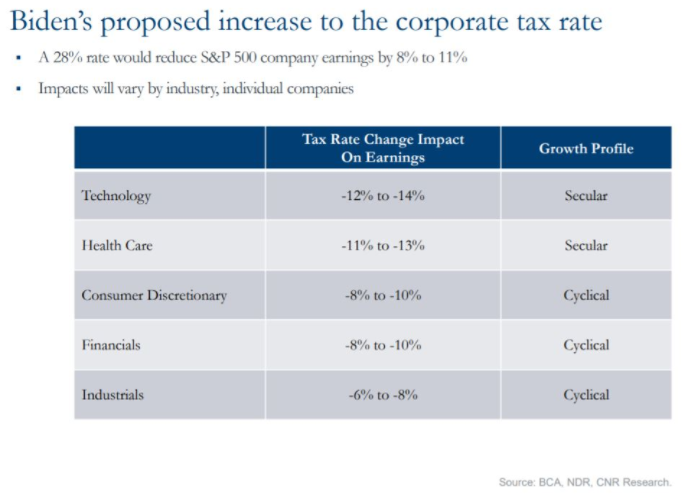 The investment leaders continue to expect corporate earnings to rebound by 20 percent to 40 percent next year but noted that equity valuations are high.

The Swiss Re Cat Bond Index tracks the return for all outstanding USD denominated cat bonds. The index is based on Swiss Re pricing indications only.

The Bloomberg Barclays US Treasury Intermediate Index measures US dollar-denominated, fixed-rate, nominal debt issued by the U.S. Treasury with maturities of 1 to 9.9999 years to maturity.

City National (and its clients or associated persons) may, at times, engage in transactions in a manner inconsistent with this article and, with respect to particular securities and financial instruments discussed, may buy from or sell to clients or others on a principal basis. Past performance is not necessarily an indication of future results. This article may not be reproduced, distributed or further published by any person without the written consent of City National. Please cite source when quoting.
You may also like...
On the Radar | Sep. 14, 2020

Where are we in the economic reopening?

What was the important statement that Fed Chair Powell made at the Jackson Hole Symposium?