The investment leaders remain cautious about financial markets, however, and consider stocks to be overvalued, given uncertain economic fundamentals.

Major pandemic-related developments in the past week included moves by companies and state governments to draw up their initial reopening plans.

Insufficient testing for the coronavirus presents a major obstacle to restarting the U.S. economy, according to City National Bank's investment team, which expects states to start gradually lifting pandemic restrictions next month if they can put appropriate testing and isolation protocols in place.

Broadly, the bank's investment leaders continue to expect the U.S. economy, battered by social distancing measures and business shutdowns designed to slow the pandemic, to fully recover in about two years. They're reassured by the federal government's powerful policy moves to support businesses, workers and consumers, and by signs that virus hospitalizations and fatalities may have reached a plateau.

The investment leaders remain cautious about financial markets, however, and consider stocks to be overvalued, given uncertain economic fundamentals. They're raising cash in client portfolios both as a buffer and to take advantage of market opportunities.

“Testing is the hurdle and the U.S. lacks the infrastructure, the supply chain, the manufacturing, the organization for mass testing," Garrett D'Alessandro, CEO of City National Rochdale, the bank's investment advisory organization, said during his team's weekly market update Monday. “This is a big hindrance for us to see clarity on when and how the states reopen."

In the near term, to get businesses operating again, government officials must ensure adequate diagnostic testing, find a way to trace people who test positive for the virus and maintain strict practices for quarantining them, he said. 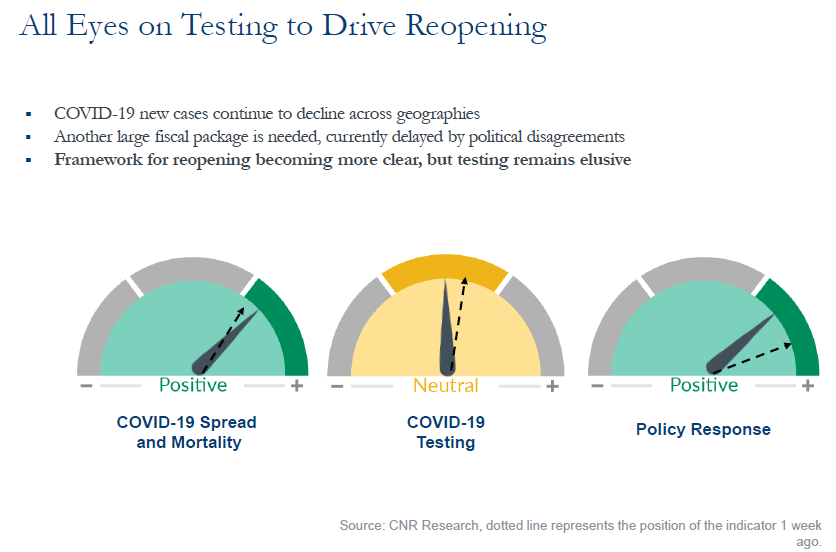 Under optimistic forecasts, a coronavirus vaccine isn't likely to become available until late 2021, so it's not a solution for resurrecting the economy this year, D'Alessandro said. He predicted that a near-term treatment is unlikely, as it's far too soon to expect a cure based on the medications that are currently being explored.

Diagnostic testing needs to be “in much better shape" so states can feel confident about sending people back to work in the meantime, D'Alessandro said. But instead, testing volumes have been backsliding, he added, citing data from The Covid Tracking Project indicating that U.S. testing has leveled off in recent weeks.

The country needs to see improvements in the testing supply chain and coordination with labs, as well as widespread testing in stores and fast-food chains, he said. Apps that can track those who've tested positive and act as a “passport" for healthy employees are also important. 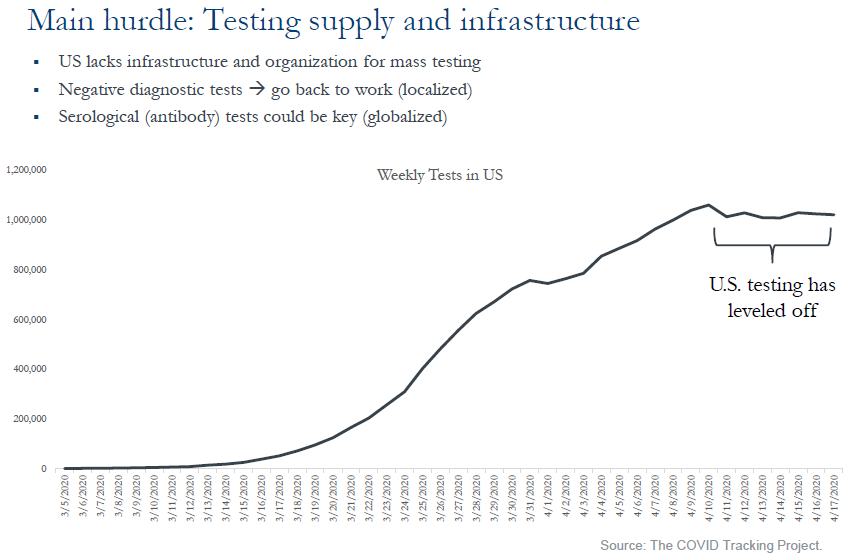 Major pandemic-related developments in the past week included moves by companies and state governments to draw up their initial reopening plans, and distribution of low-interest loans to small businesses nationwide under a massive federal stimulus program designed to support the economy during the shutdown. 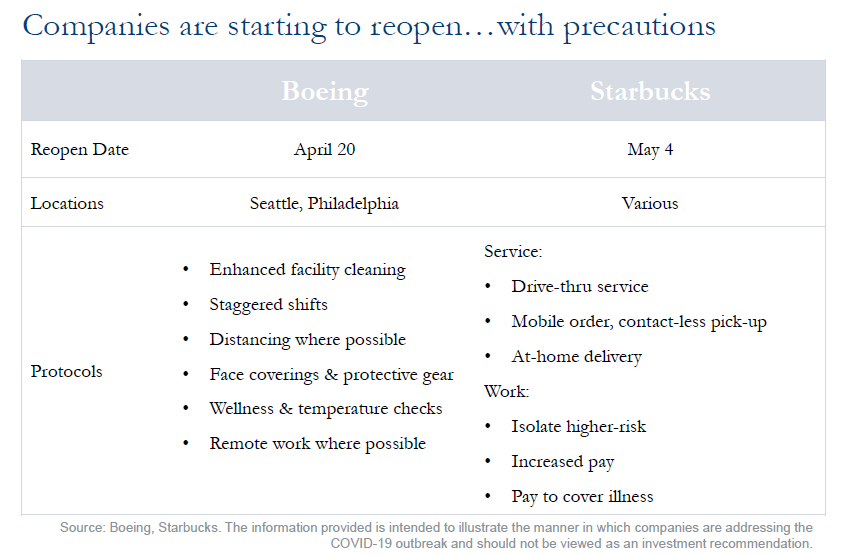 While the White House has issued general guidelines for states to reopen in phases, state governments will likely set their own rules and make the decisions, D'Alessandro noted. Under the guidelines, states will need two weeks with downward trends in cases, plus adequate testing and hospital capacity, before starting to lift restrictions.

If states see a second coronavirus flare-up occur subsequently, they'd need to return to tighter restrictions; if there's no second wave, a state could proceed to phase two, which would include schools reopening, D'Alessandro explained.

“You could have different results in different states," he said.

Phase three, which would feature unrestricted business activity, fewer limits on large venues and people going out but avoiding large crowds, is probably “months away," he said. 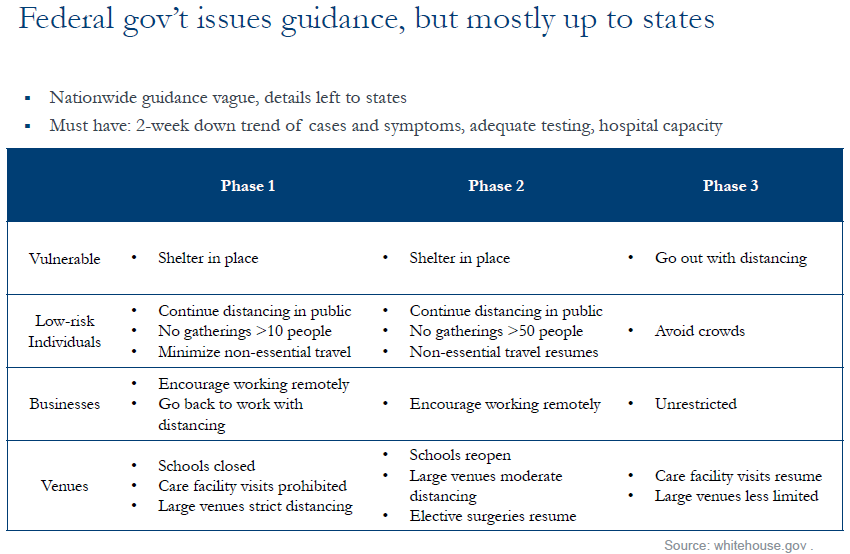 The dramatic drop in oil prices poses a severe negative for U.S. economic activity and will continue to bring financial pain to the oil patch in the form of lost jobs, defaults and lower investment, he said on a day when crude oil prices experienced an historic collapse. 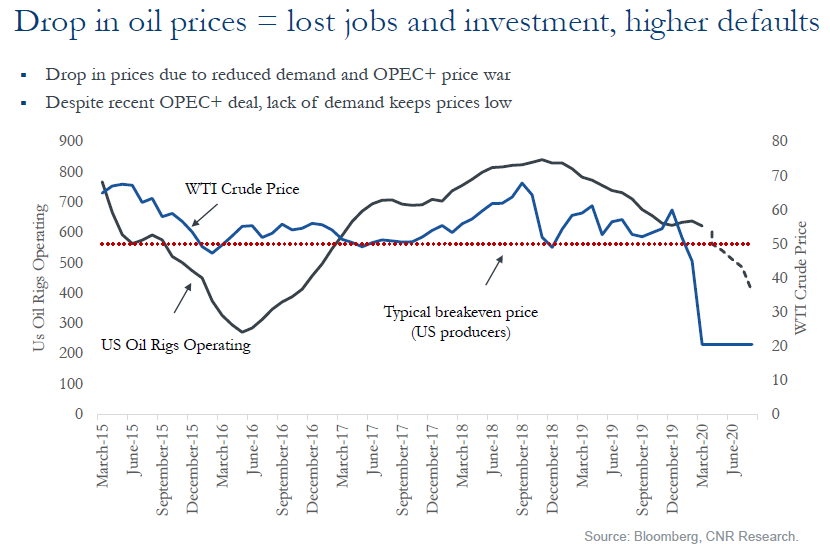 All this volatility leads City National's portfolio managers to take a cautious approach.

So far, 2020 has brought quick bull and bear markets, and “we believe there's going to be another pullback," Galvin said, noting an “unprecedented decline" so far in first-quarter earnings year-over-year. “We think stocks are far ahead of the fundamentals in what is likely to be a multi-month bottoming process." 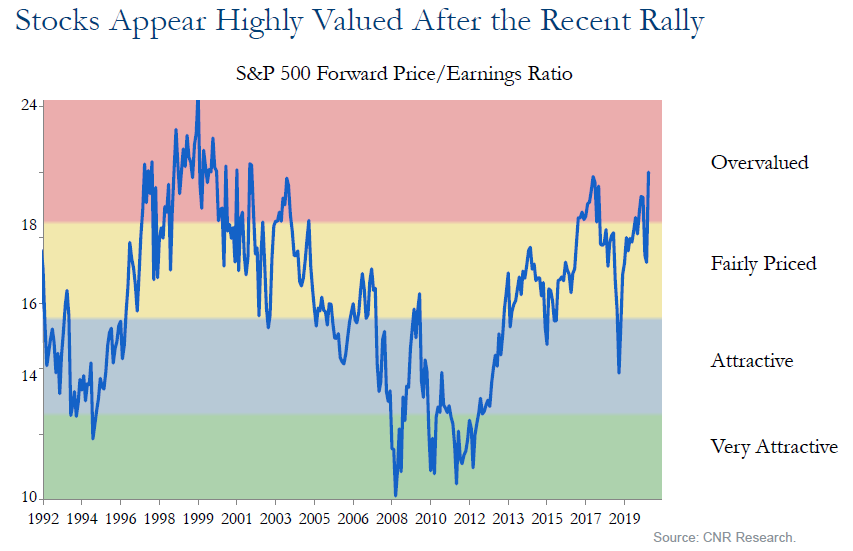 The investment team believes Wall Street consensus estimates for earnings this year remain too high even after coming down in recent days; City National Rochdale forecasts earnings per share could drop by 27 percent in 2020, versus a 12 percent average decline estimated by analysts, he said. 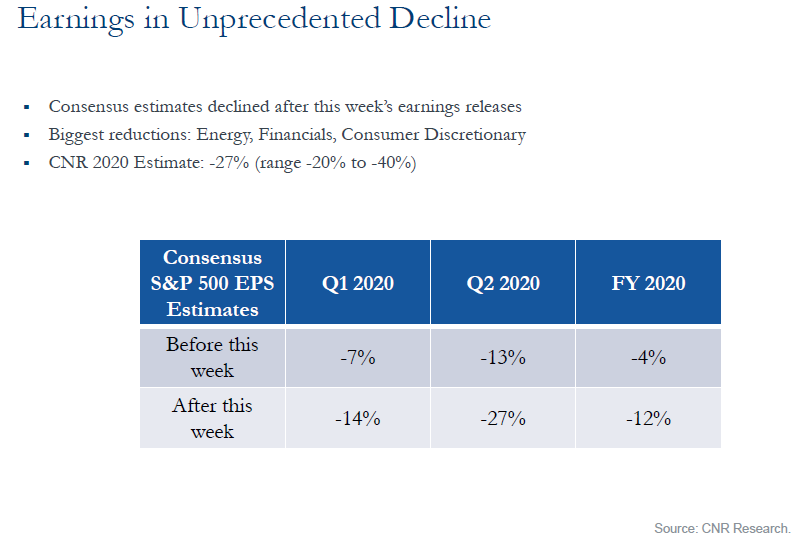 Gross domestic product forecasts, stable before the outbreak, remain unclear and will continue to fluctuate, Galvin said. “What we're witnessing is really unprecedented, uncertainty is really high," he said.

City National Rochdale most recently forecast a 3.9 percent to 6.2 percent reduction in GDP in 2020, with a rebound starting in the third quarter if states do start reopening in May; they project 2.5 percent to 4.5 percent GDP growth in 2021. 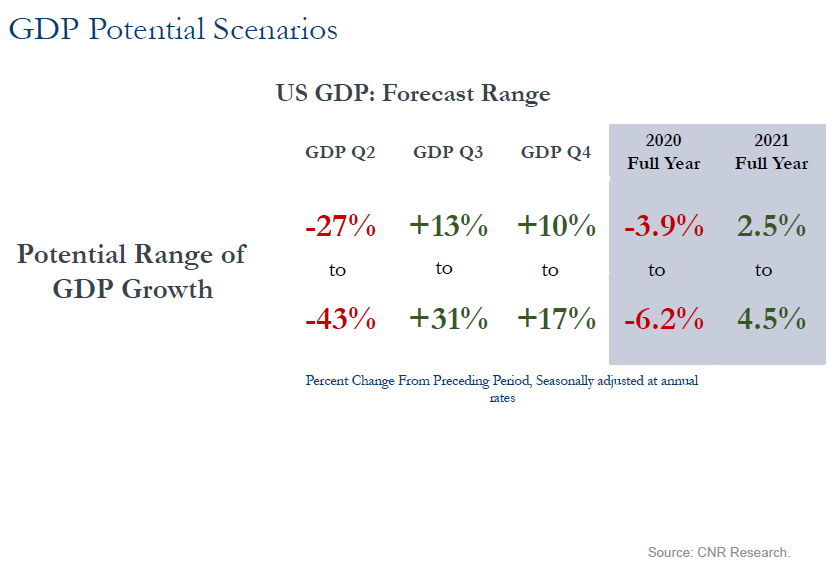 The portfolio managers are raising cash as an insurance policy against a possible market pullback and to take advantage of investment opportunities that may arise, Galvin told clients. "We believe capital preservation is as important as capital appreciation," he said.

The U.S. government has taken the lead globally on enacting programs to support the economy during the pandemic, Galvin said. While the next several months are likely to bring ongoing volatility, he predicted, once the country gains greater visibility on a vaccine and treatment, those programs are “likely to lay the foundation for good economic growth in the coming two, three, five years."

The investment leaders remain cautious about financial markets, however, and consider stocks to be overvalued, given uncertain economic fundamentals.

Major pandemic-related developments in the past week included moves by companies and state governments to draw up their initial reopening plans.

How significant will the economic impact be from Hurricane Ida?