The Long Road to Recovery

Europe, which is a bit farther along in the reopening process than the United States, hasn't experienced an unmanageable second wave.

As consumers try to balance their ongoing fears over the coronavirus pandemic with the desire to resume normal activities, the U.S. economy faces a long, steady road to recovery, City National Bank's investment leaders said during a weekly market update.

A second COVID-19 wave is likely as states reopen for business, although evidence of a significant resurgence hasn't appeared in those places that have lifted restrictions in recent weeks, they noted.

Rather, his team expects the economy to hit a trough in June or July before gradually regaining strength over the next several quarters.

OPTIMISM ABOUT MARKET EARNINGS IS QUESTIONABLE

"We cannot have the shutdown that we have for many more months because then I will change the way we are talking about a depression," he said.

Although select investment opportunities remain, large-cap U.S. stocks in the Standard & Poor's 500 Index have become overvalued as Wall Street shows too much optimism about earnings and the timeline for coronavirus vaccine development, D'Alessandro said.

"The fundamentals are gradually getting better but the market's a little ahead of that," he said. 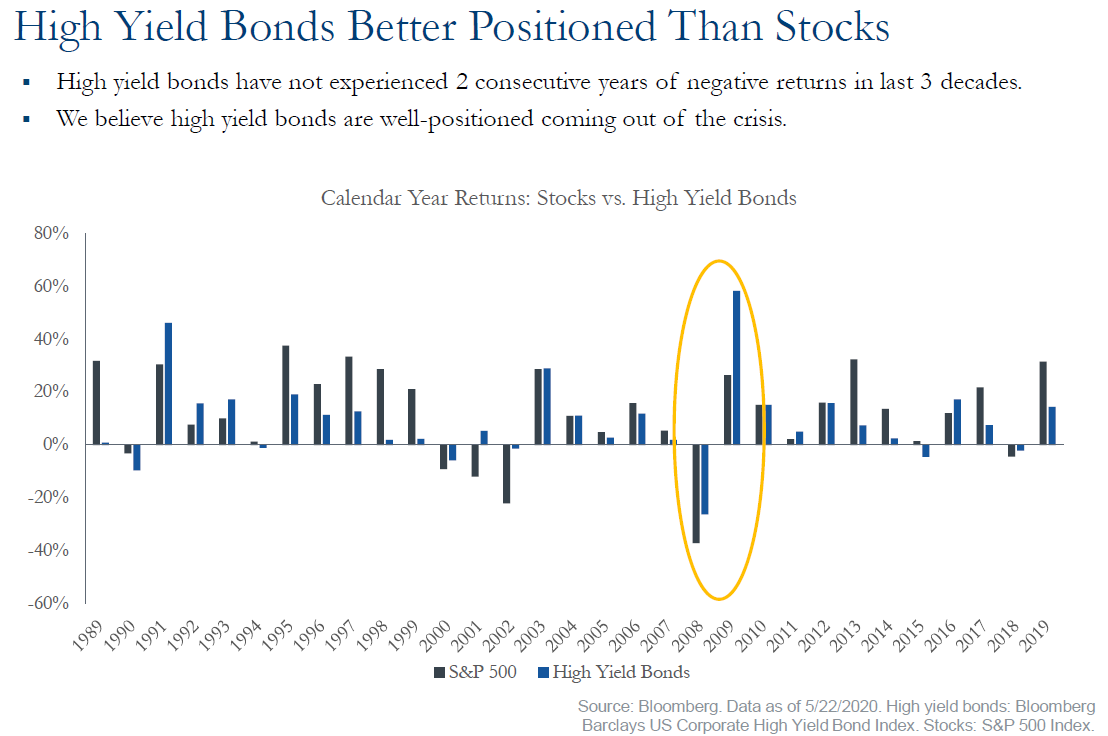 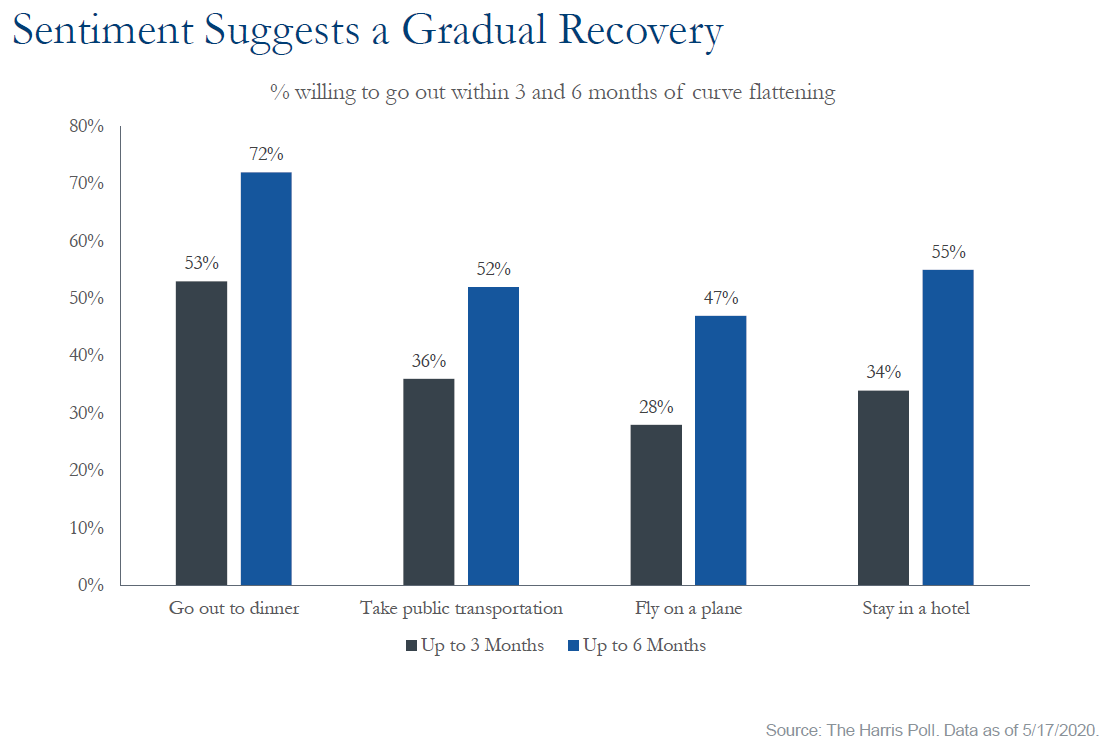 They favor high-yield bonds and noted that investment-grade bonds' yields are likely to remain low for a while.

"We like high-yield bonds. They offer more attractive risk-reward potential than the S&P 500 Index does today" and are well-positioned for a good recovery after the crisis recedes, City National Rochdale Chief Investment Officer Tom Galvin said, citing Bloomberg data.

"We are confident that this asset class will rebound over time."

Stocks generally are likely to produce lower returns in the next five years based on their current values, so City National Rochdale remains comfortable with its underweight position in equities, he said.

Consumers' attitude is key, as they account for two-thirds of economic activity, Galvin said, citing a tug-of-war between individuals' desire to reengage in the world and their concerns over the coronavirus.

Consumers are starting to return to normal behavioral patterns, with apparel and automotive sales picking up, Galvin noted, but consumer sentiment expressed in a May 17 Harris Poll supports the notion of a gradual recovery.

Just over half of consumers said they would be willing to go out to dinner within three months of the COVID-19 curve flattening, and only a minority is willing to take public transportation, fly on a plane or stay in a hotel during that period, he said.

The same poll, though, indicated that consumers are more worried about the pandemic's financial impacts than about the infection itself, D'Alessandro said.

AS CONSUMERS PICK AND CHOOSE

A second wave, while likely manageable, will highlight tensions between those comfortable with some infection and fatality risks and those who don't consider any risk acceptable, D'Alessandro said.

In the past month, consumers have started to venture out and drive more in key cities but appear to be avoiding public transportation if they can, Galvin said, citing data from Apple.

Restaurant bookings, which went off the cliff when the pandemic hit, have gradually started climbing in reopened states, he said.

However, they are likely to take many months to fully recover, added Galvin, citing Bloomberg and Open Table data. 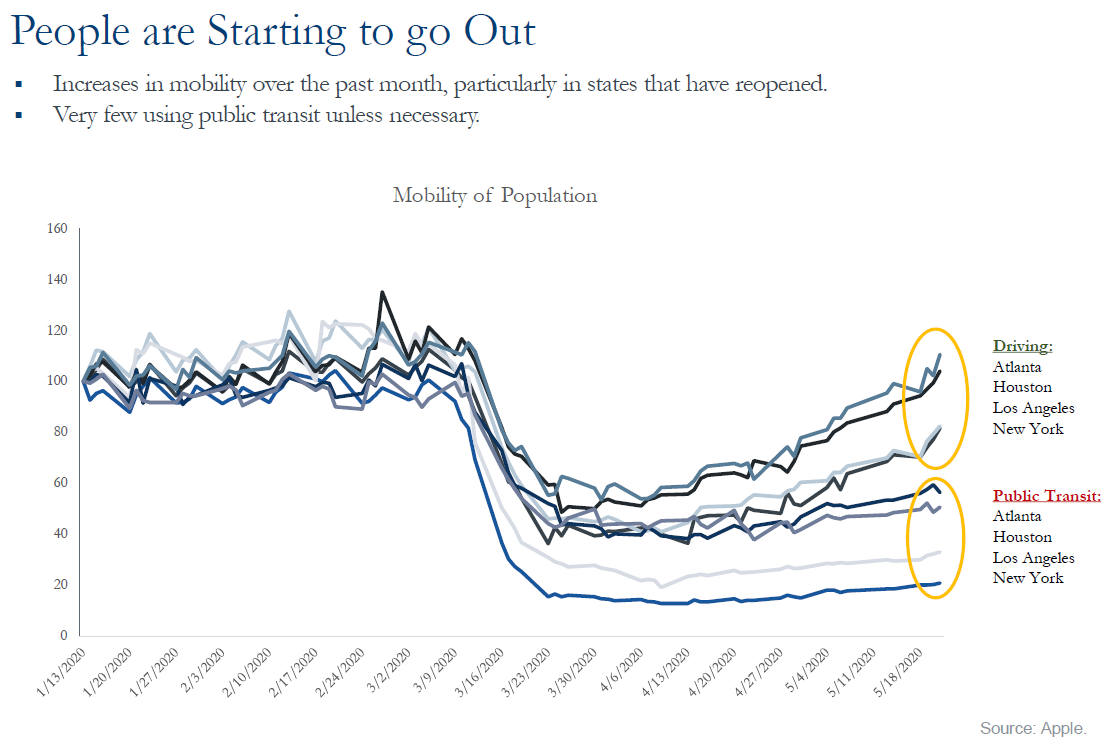 The team cited several other developments that factor into consumer outlook, including:

Trends in infection spread will indicate whether the reopening process is successful, D'Alessandro said. The picture looks good so far, he said.

Testing, tracing and isolating are key to controlling the second wave, and states need to take strong action in those areas, such as tracing cases and forcing those who test positive to stay home, get out of circulation and stay off airplanes, he said. 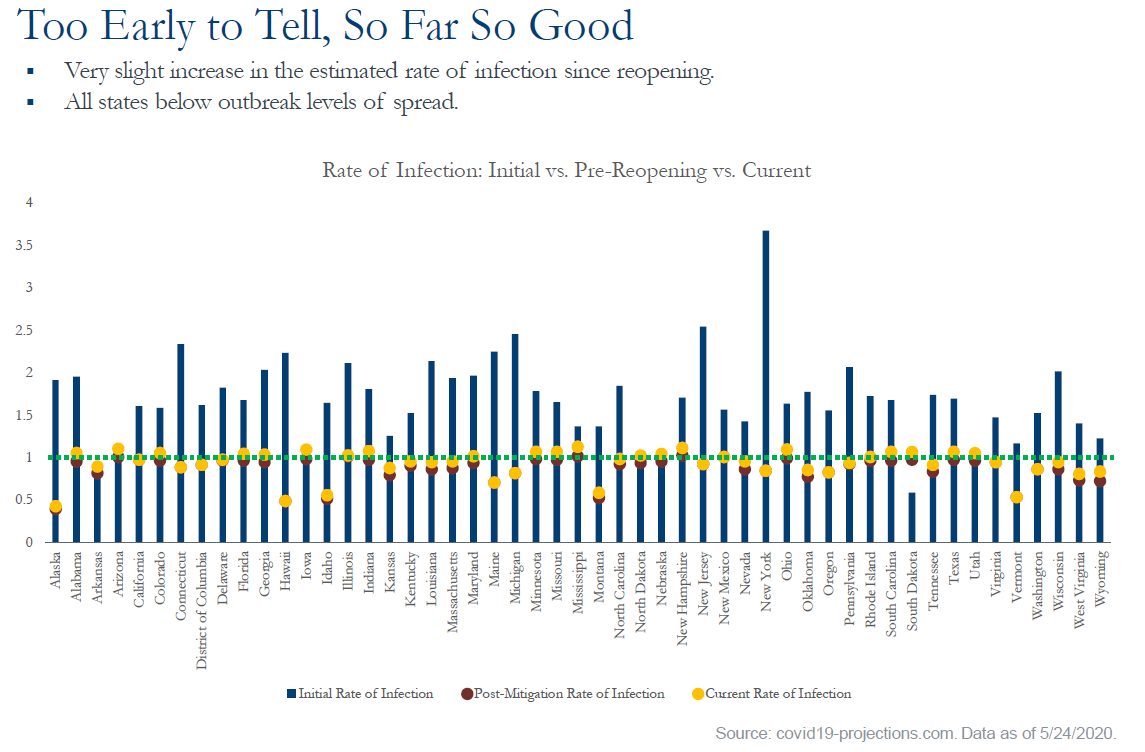 Europe, which is a bit farther along in the reopening process than the United States, hasn't experienced an unmanageable second wave, he noted. 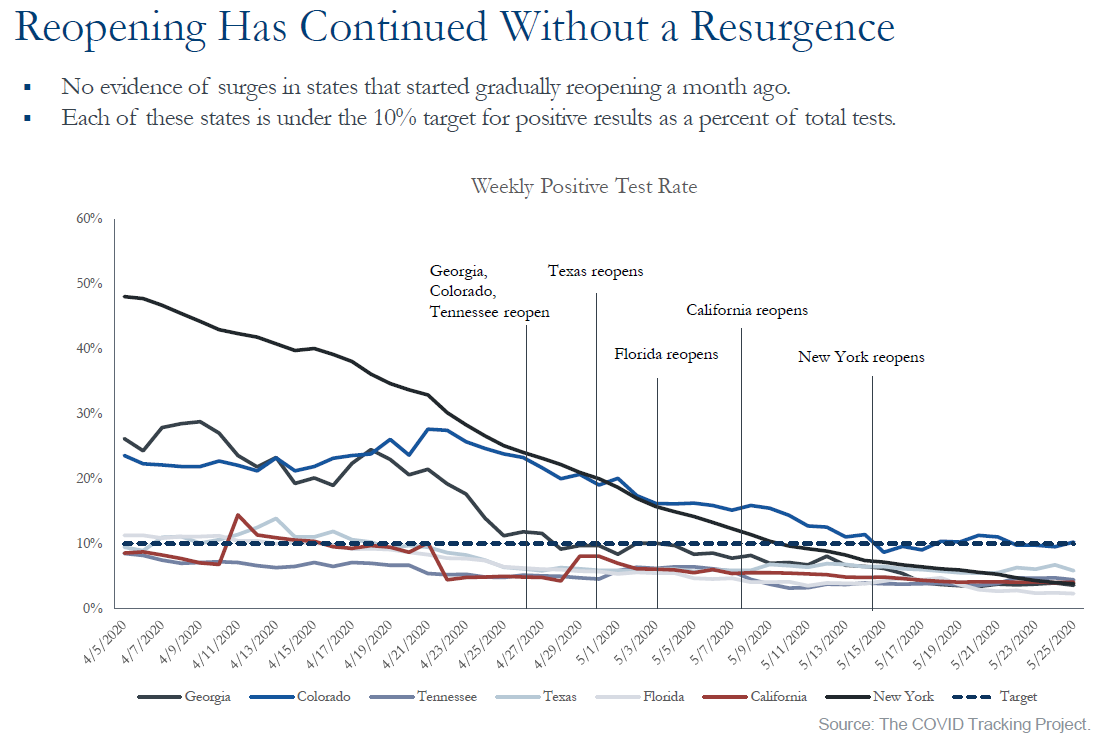 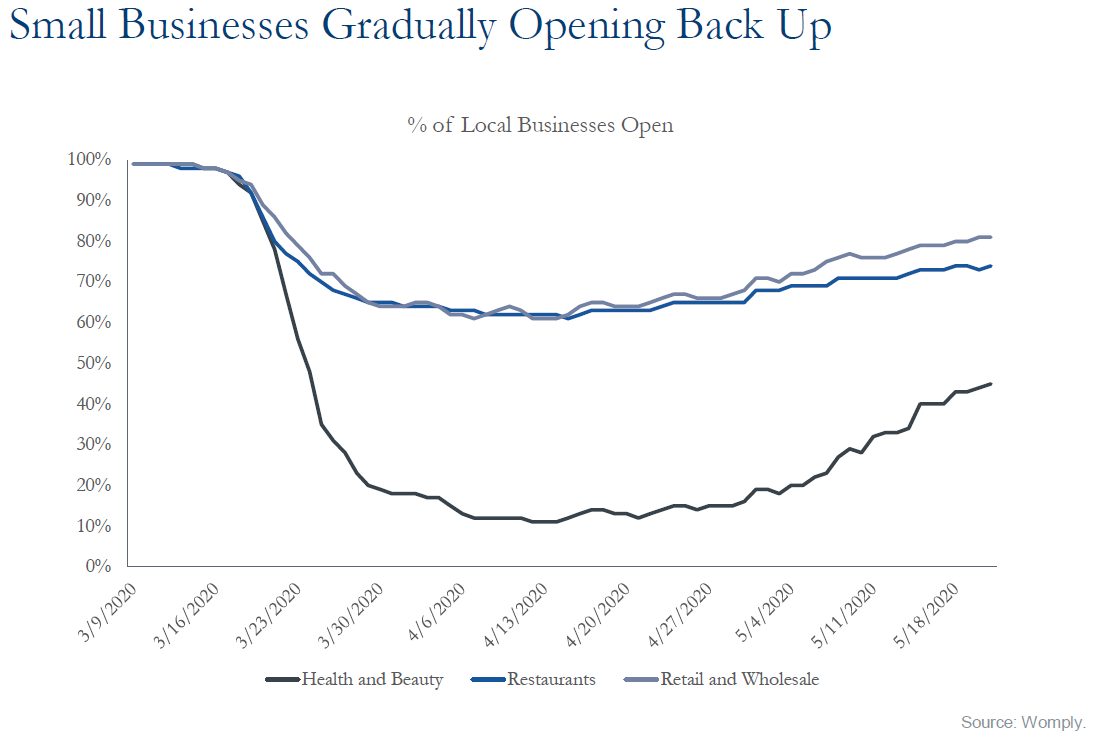 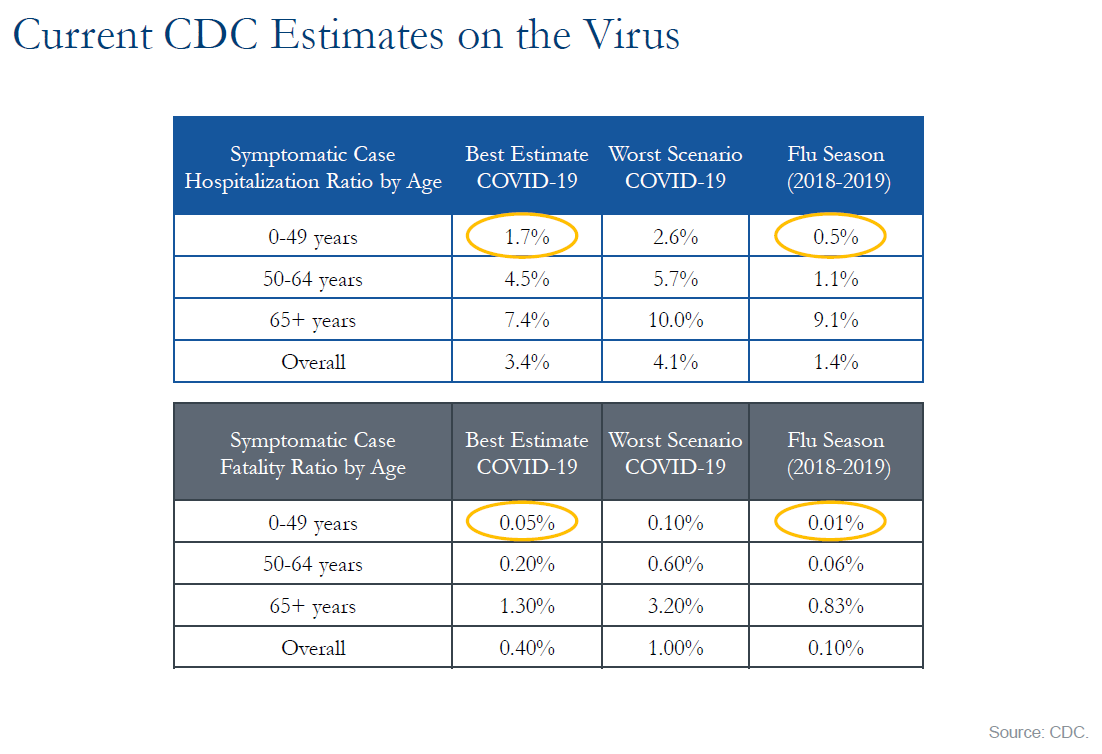 Federal stimulus programs have helped bolster the economy as unemployment reaches unprecedented levels. Given ongoing unemployment and the expectation that jobless claims will peak in June or July, the team anticipates the government will provide another round of stimulus funding, possibly more than $1 trillion, over the summer.

The Fed is following through on "the right prescription" for supporting the economy and avoiding a depression, D'Alessandro said.

Europe, which is a bit farther along in the reopening process than the United States, hasn't experienced an unmanageable second wave.

Standard & Poor’s 500 Index is a widely recognized unmanaged index including a representative sample of 500 leading companies in leading sectors of the U.S. economy and is not available for purchase. Although the Standard & Poor’s 500 Index focuses on the large-cap segment of the market, with approximately 80% coverage of U.S. equities, it is also considered a proxy for the total market.

City National (and its clients or associated persons) may, at times, engage in transactions in a manner inconsistent with this article and, with respect to particular securities and financial instruments discussed, may buy from or sell to clients or others on a principal basis. Past performance is not necessarily an indication of future results. This article may not be reproduced, distributed or further published by any person without the written consent of City National. Please cite source when quoting.
You may also like...
Economic & Market Perspectives | Nov. 2019