Thinking About Getting Back to Work

The bank's investment team continues to see “a very negative situation in unemployment," with a bottom likely in June or July followed by a modest, long-term recovery.

Nevertheless, the bank's investment leaders expect the U.S. economy to hit bottom in June or July, followed by a gradual recovery that could take up to two years.

“We think it's prudent to continue to maintain the conservative posture that we have taken," Galvin said.

REOPENING THE ECONOMY, STATE BY STATE

Data from states that were the first to lift restrictions indicate “no meaningful second wave" of the lethal virus so far.

Meanwhile, no other country has experienced an unmanageable virus resurgence either, he said.

The pace of testing has more than doubled across the country over the past month, with big cities making testing more widely available.

Positive result rates have fallen to 6 percent nationally in the last week, according to D'Alessandro, who cited data from The COVID Tracking Project. 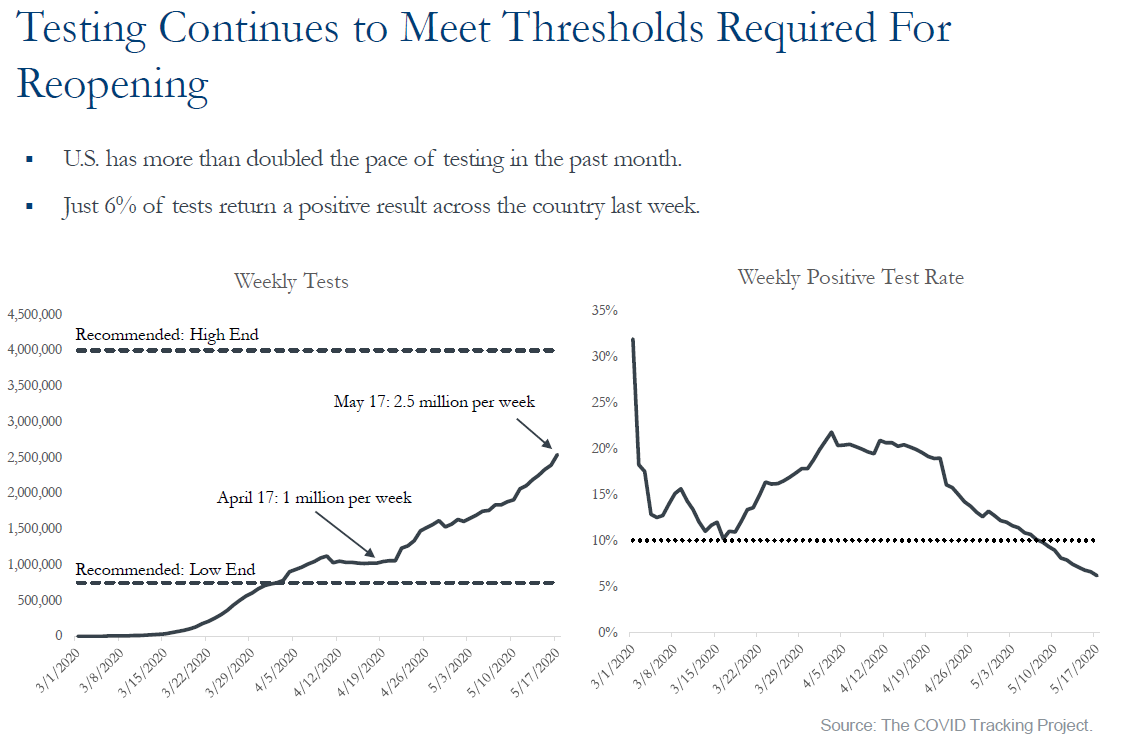 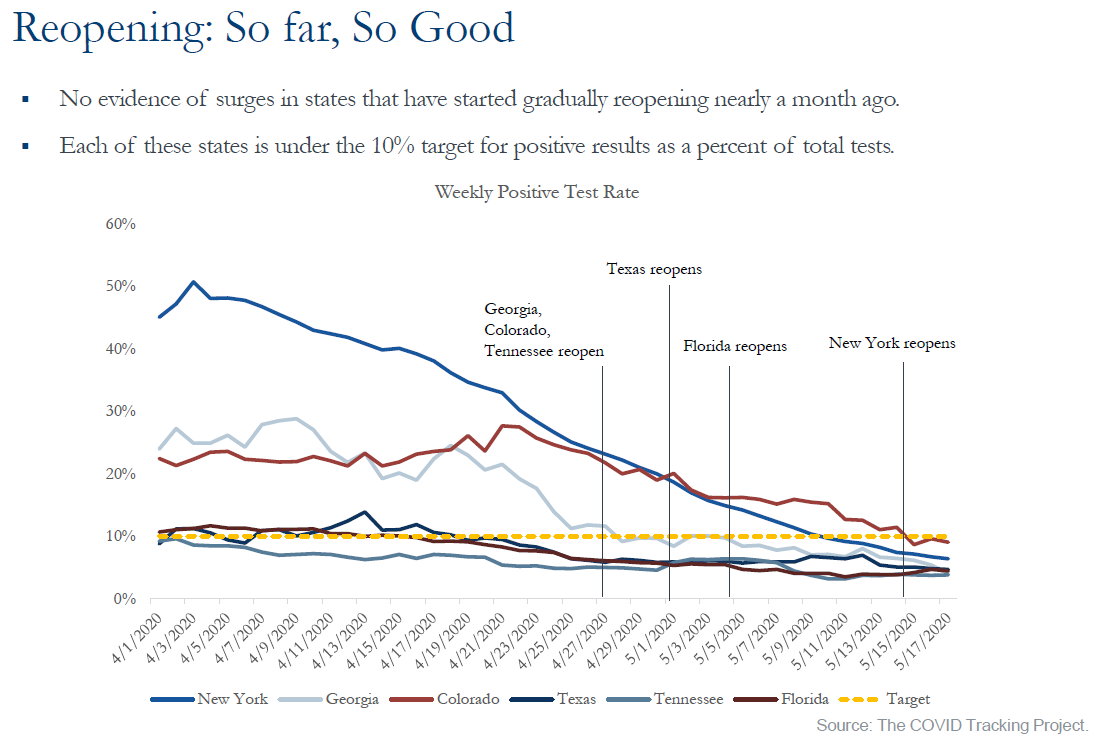 In addition, new infections have declined in every state, according to D'Alessandro, who cited recent data from covid19-projections.com.

“Everyone should be pleased with the progression over the last two or three weeks," he said, noting data from the Institute for Health Metrics and Evaluation (IHME), which shows numerous states with adequate hospital capacity. 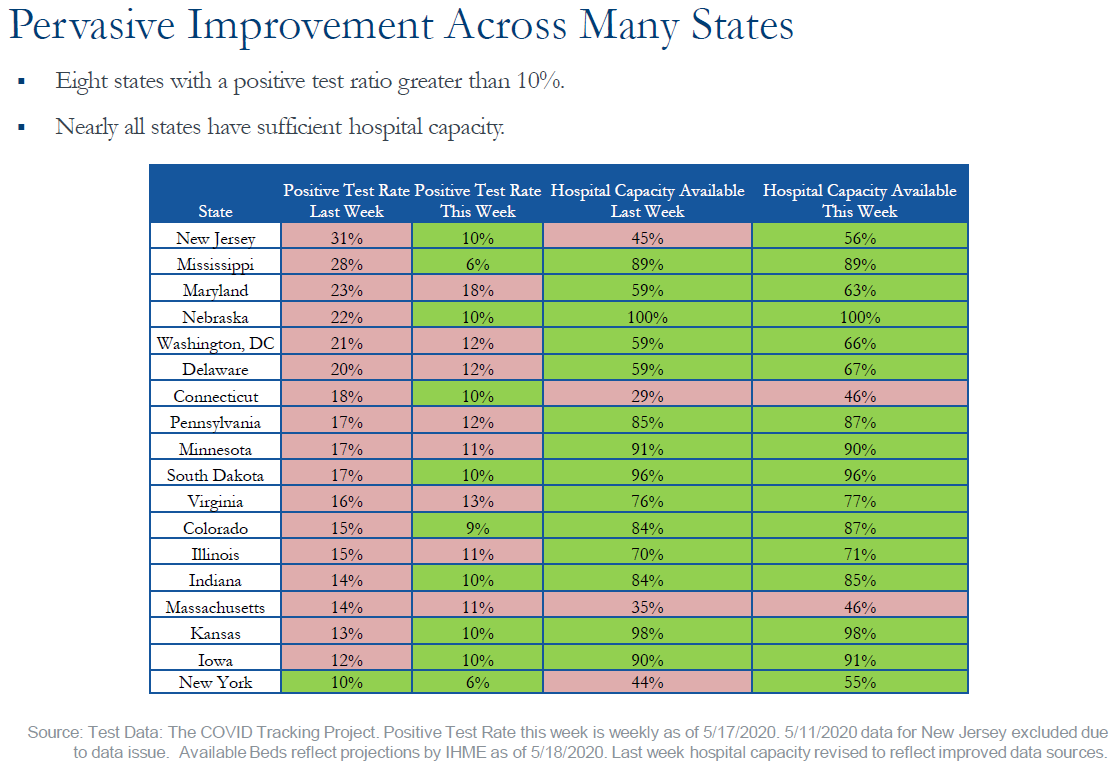 The City National team believes overconfidence is driving expectations that a coronavirus vaccine will appear this year.

D'Alessandro said he anticipates a vaccine is more likely to materialize in 2021, despite recent news indicating some progress.

As for the economy, the bank's investment team continues to see “a very negative situation in unemployment," with a bottom likely in June or July followed by a modest, long-term recovery, D'Alessandro said.

“It won't be a resurgence of 20 million jobs within a couple of months," he added.

Lower-skilled, low-wage workers who can't work remotely are bearing the brunt of the economic hit from the pandemic, D'Alessandro said, noting that 39 percent of U.S. workers with household income under $40,000 lost their jobs in March.

Unemployment benefits under the CARES Act, the new federal law passed to support individuals and businesses during the pandemic, can replace most or all lost income for many unemployed Americans at least through July, he said, citing Bureau of Labor Statistics and data from the Center on Budget and Policy Priorities. 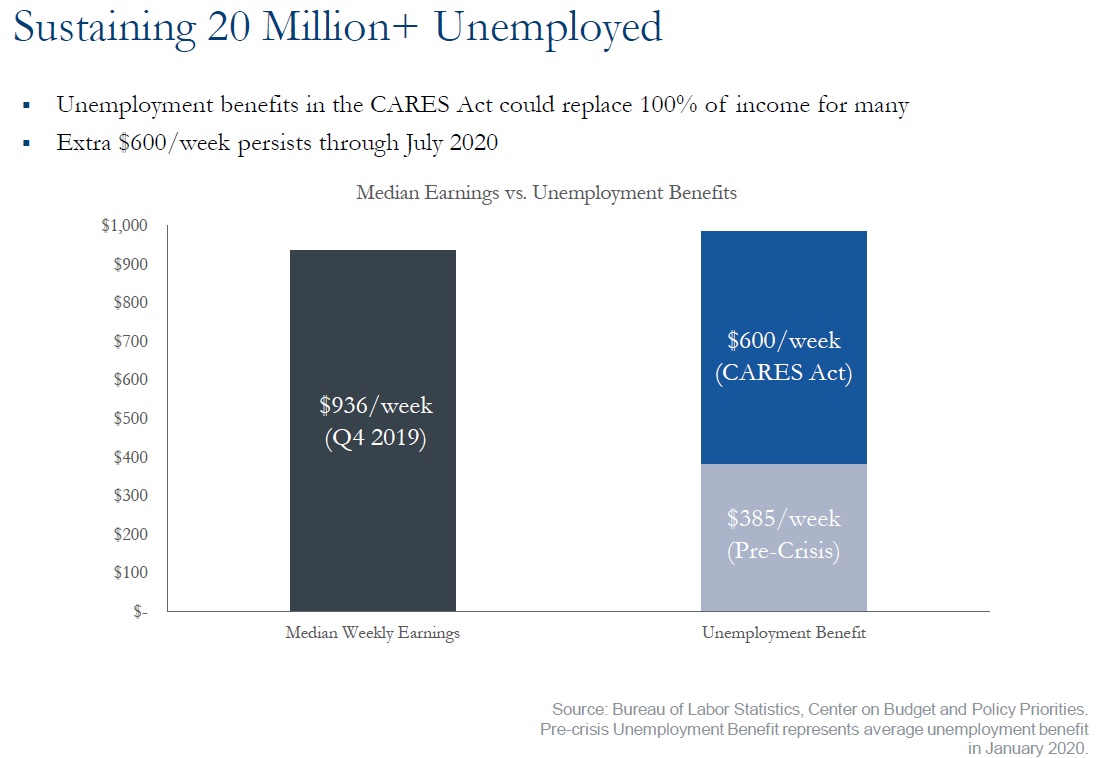 Despite the significant financial support, more than half of the unemployment payments did not arrive to recipients on time.

States struggled to process high claim volumes and expanded benefits in April, D'Alessandro said, citing Brookings Institution information. This backlog, along with sudden layoffs in April, created an immediate cash crunch for many.

In fact, 36 percent of unemployed and underemployed households were unable to pay all of their bills, D'Alessandro said, citing Fed data. Still, most renters managed to pay their April and May rent, he said, citing the National Multifamily Housing Council.

Additional government aid or a faster economic reopening will be needed after July, when enhanced unemployment benefits provided through the CARES Act will expire, D'Alessandro added.

Many of those laid off could go back to their jobs, leading to a faster recovery.

However, states must continue the reopening process for this to happen, he said, citing evidence that workers are gradually returning to jobs as states lift restrictions.

The team expects the U.S. government to again bolster individuals and businesses by approving another $1 trillion to $2 trillion soon.

Even with a recovery, City National's investment leaders estimate that unemployment, which could peak at 20 percent or higher this year, will remain significant next year, perhaps falling to six percent or seven percent by year-end 2021.

“This is going to be a long steady progression down in the unemployment rate," D'Alessandro said.

City National Rochdale continues to focus on high-quality U.S. growth stocks and high-yield bonds while setting aside cash to take advantage of market opportunities. They like healthcare stocks and tech companies that support remote work and commerce.

The team expects another stock market pullback during the pandemic, and they project that investment-grade bond yields will stay low for at least two years. 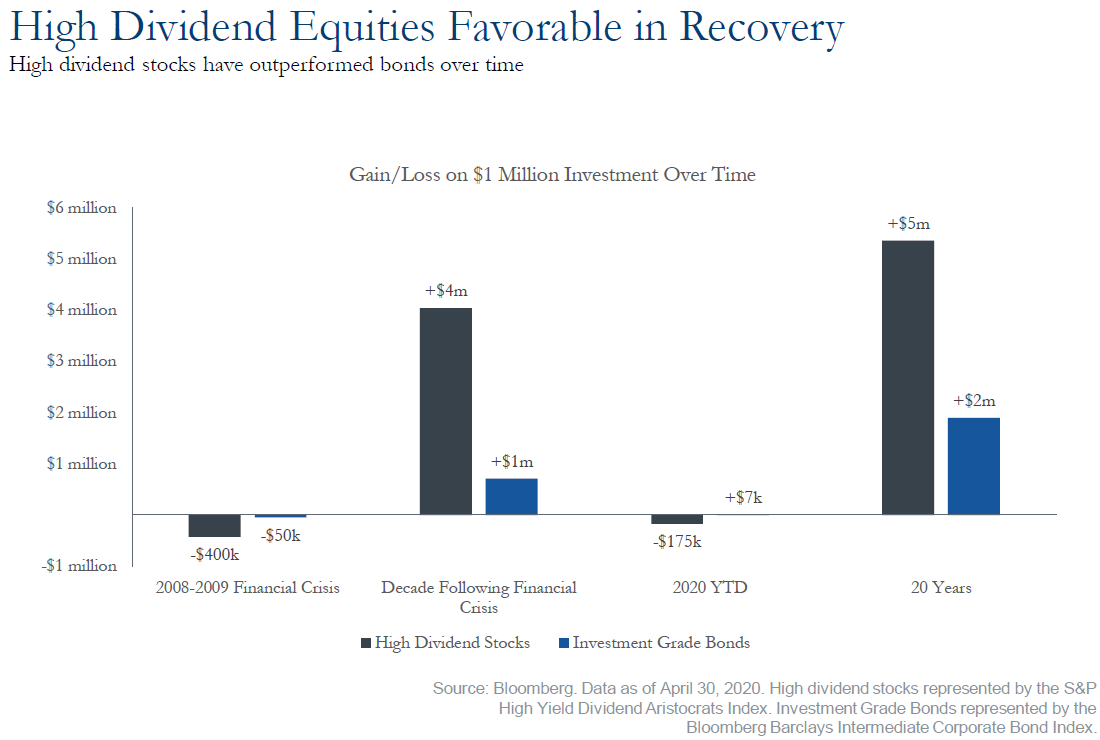 D'Alessandro said the stock market, which the team considers overvalued, appears to be treating the pandemic as a natural disaster, placing it in a capsule and not putting much weight on it. 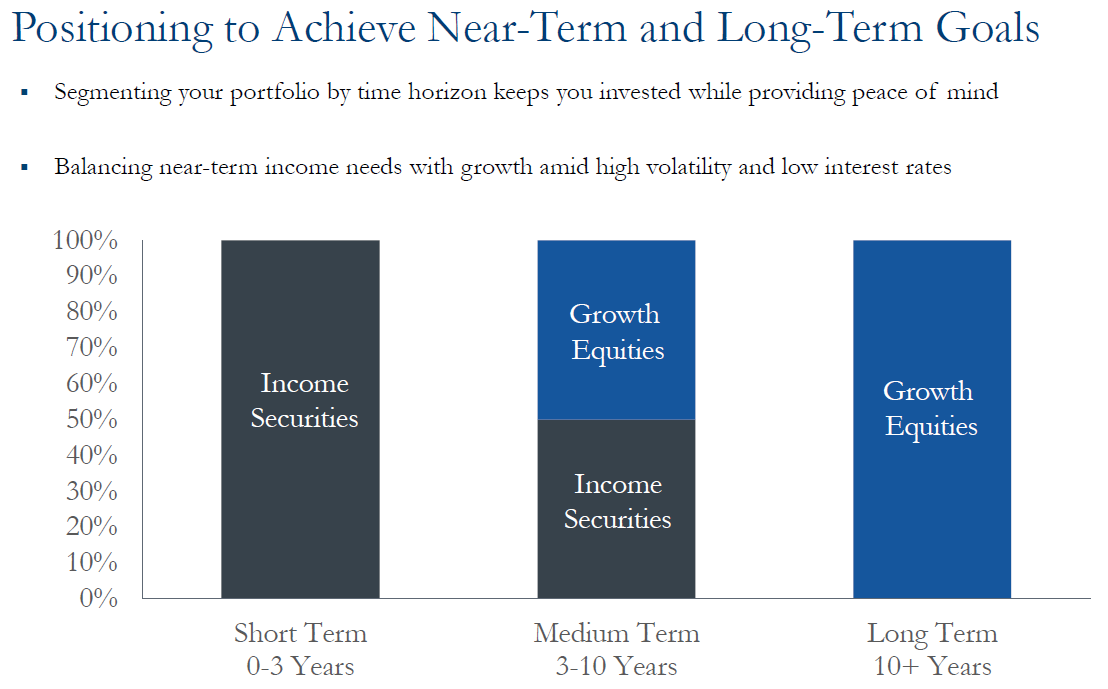 The bank's investment team continues to see “a very negative situation in unemployment," with a bottom likely in June or July followed by a modest, long-term recovery.

Standard & Poor's 500 Index is a widely recognized unmanaged index including a representative sample of 500 leading companies in leading sectors of the U.S. economy and is not available for purchase. Although the Standard & Poor's 500 Index focuses on the large-cap segment of the market, with approximately 80% coverage of U.S. equities, it is also considered a proxy for the total market.

The S&P High Yield Dividend Aristocrats Index is designed to measure the performance of the 50 highest dividend yielding S&P Composite 1500 constituents which have followed a managed dividends policy of consistently increasing dividends every year for at least 20 years.

City National (and its clients or associated persons) may, at times, engage in transactions in a manner inconsistent with this article and, with respect to particular securities and financial instruments discussed, may buy from or sell to clients or others on a principal basis. Past performance is not necessarily an indication of future results. This article may not be reproduced, distributed or further published by any person without the written consent of City National. Please cite source when quoting.
You may also like...
Economic & Market Perspectives | Nov. 2019