Optimism over U.S.-China trade negotiations, modestly better-than-expected economic and corporate earnings results, and the Fed’s recent rate cut have helped ease recession fears and pushed many major equity indices into record territory. Yet the durability of the rally underway around the world in stock prices remains in question, as recent strength seems more driven by decreasing uncertainty in the near-term outlook, rather than improving confidence in longer-term fundamentals.

The rally in global equities this year has led many to draw comparisons to 2017, when a strong synchronized upturn in the world economy provided the fuel for outsized returns in non-U.S. Developed Markets stocks and record low volatility. However, it’s been hard to square more recent gains with the fact that this time they have arrived while the global economic outlook has grown progressively dimmer.

Despite some recent signs of stabilization and stepped-up support from global central banks, growth prospects for most advanced economies continue to be weak. For the fourth time in the last year, the IMF has cut its forecast for 2020 global GDP, warning that trade tensions and declining business confidence were weighing on nearly all countries around the world, particularly developed economies in Europe already struggling against secular headwinds to growth. 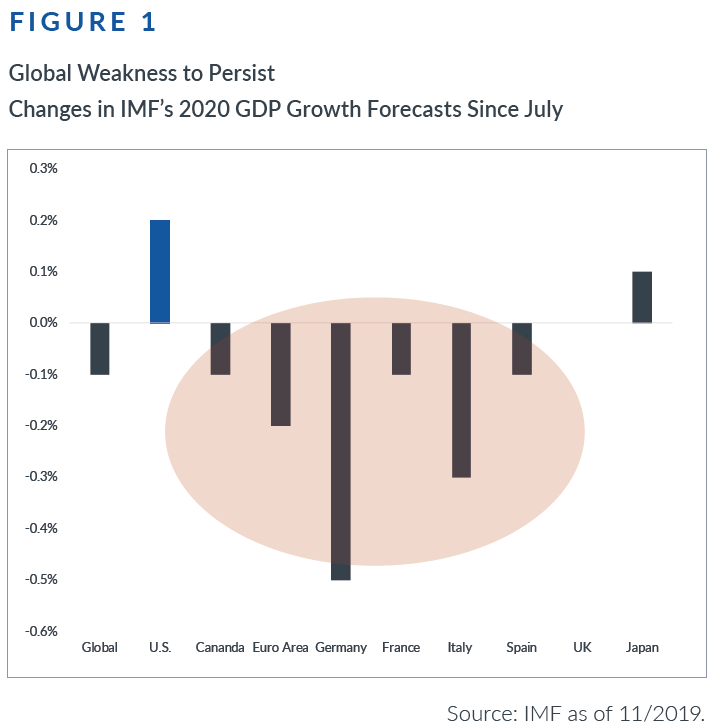 All of this has led to the curious development where global equities are up 20% YTD despite continued investor outflows. Corporate buybacks in particular have largely been driving the U.S. market up this year, while nervous investors have socked $3.4 trillion away in money-market funds, pushing total assets to their highest level in around a decade. This huge cash pile can be seen as an indication that markets have room to go higher, but also a sign of continued wariness over the health of the 10-year economic expansion and an aging bull market.

Though signs of a de-escalation in trade tensions have helped drive the relief rally in stocks, we caution against reading too much into the recent optimism. While a limited deal seems more likely than not to be struck in the near term, developments between the U.S. and China continue to be capricious, highlighting the delicate nature of negotiations. As long as core issues remain unaddressed, a re-escalation in the trade war remains a distinct possibility. Uncertainty around that, as well as other concerns such as Brexit and potential auto tariffs, will likely continue to weigh on the outlook in 2020.

Among developed economies, the U.S. continues to be a relative bright spot, showing signs of slowing but sustainable growth. Still, the domestic economy hasn’t been immune from the toll taken by trade tensions and global weakness. While consumer sentiment and spending have remained healthy amid a strong job market, business confidence and investment have dropped along with sharp weakness in the manufacturing space.

This bifurcation is showing up in corporate earnings results. Defensive sectors that are less sensitive to the economic cycle, like health care and utilities, are seeing growth, while cyclical sectors like energy, materials, and consumer discretionary are lagging. Additionally, companies with greater dependence on international revenue are experiencing weaker earnings than those with less international revenue. 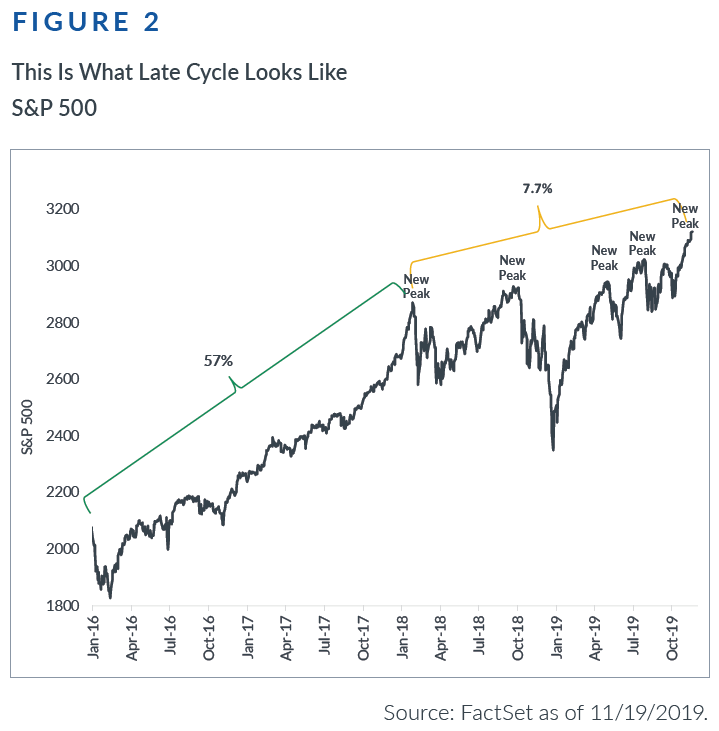 While Q3 earnings reports were better than feared, consensus growth expectations for 2020 have fallen largely due to the potential for subdued economic growth, particularly outside the US. We think earnings estimates will continue to decline in the months ahead as more management teams update their forecasts to the weaker outlook.

For the moment, investors appear to have largely shrugged off various headwinds and embraced riskier areas of the market. Yet, the reversal hasn’t yet masked the two-year defensive trend, and while market gains this year have certainly been impressive, some perspective is warranted. They come on the heels of last December’s 20% correction, when investors overreacted to fears about rising rates, trade tensions, and the extent of the global slowdown. Stepping back our perspective, we see stocks today aren’t much higher than where they were when they hit a new high in September of 2018.

Now that the pendulum of investor sentiment appears to have swung back to a more balanced position, we don’t anticipate that the current trajectory or reduction in volatility seen in markets lately is likely to continue — particularly the strength we’ve seen in developed markets. Although the ebbing of near-term recession concerns argues for staying invested in stocks, slowing economic and corporate profit growth means returns should be more modest. Meanwhile, ongoing policy uncertainty in the context of an aging expansion will remain a headwind, particularly as we move into 2020 and election season heats up, keeping market advances volatile.

Given this, we continue to think a more balanced assessment of risk is appropriate. Our late-cycle playbook has served us well through the many highs and lows over the past two years, and we continue to believe the best course of action as the economic cycle matures is building a resilient portfolio of high-quality durable assets. By focusing on high-quality U.S. stocks, select credit areas, and alternatives, we believe we have positioned our portfolios to help withstand late-cycle volatility and minimize risk, yet continue to participate in ongoing gains. 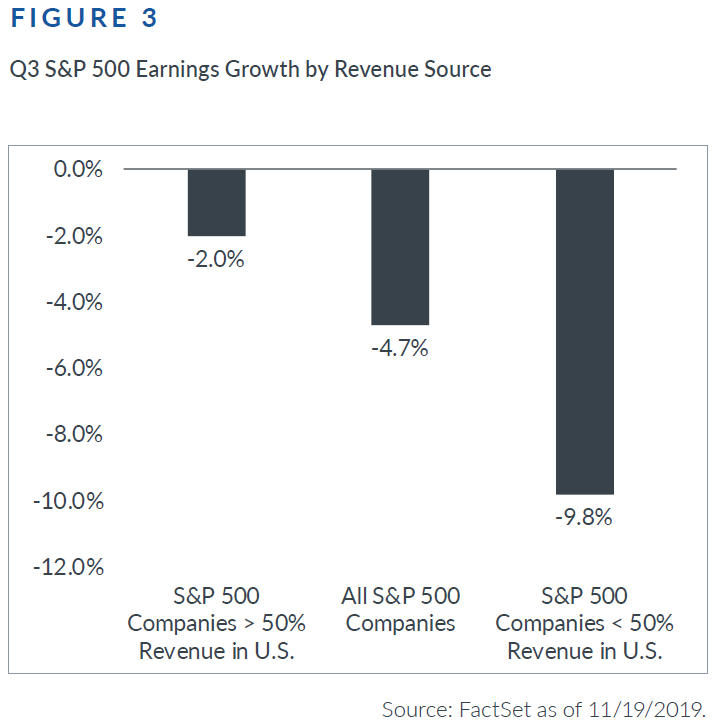 It looks like “third time’s the charm” for the Federal Reserve. In late October, at the policymakers meeting, the Fed enacted its third consecutive decrease in the federal funds rate for an aggregate decline of 75 bps. The Fed has signaled that it has no immediate plans to ease again in the near future. Since the first easing in this cycle back in July, the Fed has been clear that this is not a prolonged easing move. Instead, it is a “mid-cycle easing” move.

Back in the 1990s, the Fed entered into two “mid-cycle easings” (see Figure 4), each of them 75 bps. Then, like now, it is demonstrating the Fed’s willingness to act when needed. This move should help extend the life of the expansion.

This is happening at a time when the economic expansion is at record length, the unemployment rate is hovering at historic lows, and the personal consumption remains strong. However, the Fed has uncertainty around global growth and the persistently low inflation — hence the need to drop the overnight lending rate. 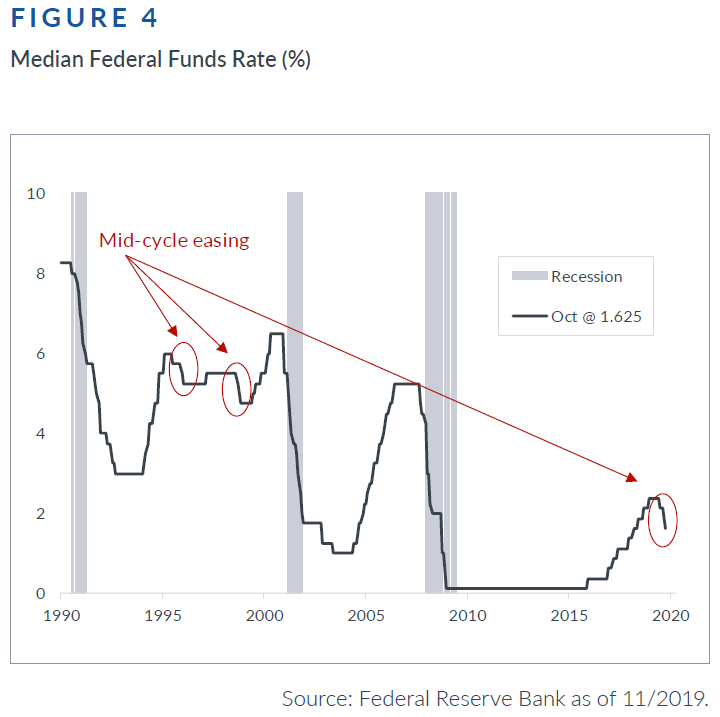 The October labor report was much stronger than expected and included positive revisions to the previous two months, when 46,000 GM workers were on strike. The nonfarm payroll report can be volatile on a monthly basis, so economists often look at the three-month moving average. This report lifted the three-month moving average to 154,000 from last month’s pre-revision number, 119,000. Clearly, this report was unambiguously positive for the domestic economic outlook and dealt a crushing blow to the mid-summer belief of an economic slowdown. (Several articles paraphrased Mark Twain’s famous quotation: “Reports of the Death of Payroll Growth Have Been Greatly Exaggerated.”)

The unemployment rate jumped — up to 3.6% — for a “good” reason: The labor force increased by 325,000, which offset the household job growth of 241,000. The unemployment rate has been at or below 4.0% for more than a year (see Figure 5). This low level of unemployment provides income to households, which should extend the healthy pace of consumption, the major driving force of this economic expansion. 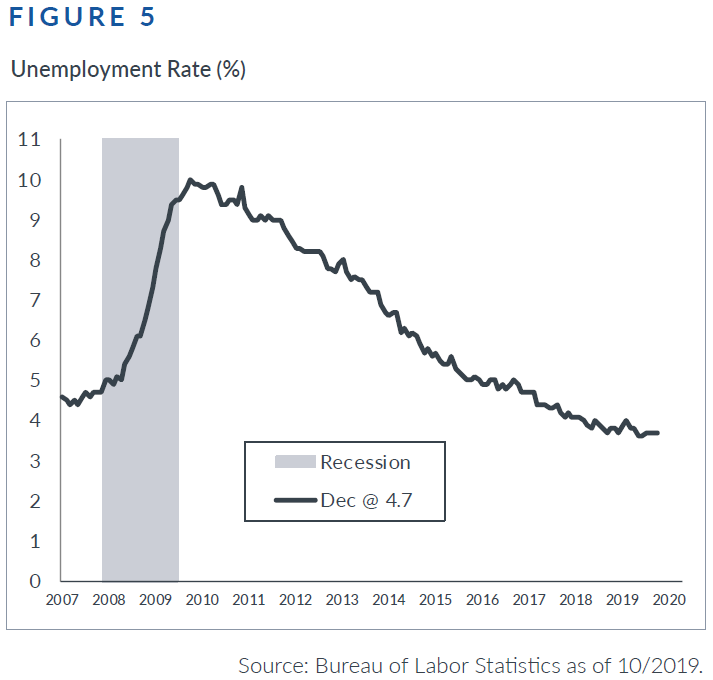 The October release showed the Consumer Price Index (CPI) jumping 0.4%, making this the largest one-month gain in eight months and placing the yearly change at 1.8%. A 3.7% increase in gasoline prices helped boost prices. Without the volatile food and energy prices (Core CPI), the yearly change stands at 2.3%. The differential between the two readings can be heavily attributed to a 7.4% decrease in gasoline prices over the past year. Food and beverage prices have increased 2.0% in the past year, which is in line with overall inflation.

Although there was volatility in the October data among various components of CPI, over the past year, price pressures have  remained fairly muted. The stability of inflation around these levels is a bit of an irritation for the Fed, which recently cut the federal funds rate three times, for an aggregate decline of 75 bps. The Fed is hoping this move will lead to a mild boost in inflation and bring it in line with its target. CPI data runs about 0.3 percentage points higher than the personal consumption price deflator, which is the Fed’s preferred inflation metric. 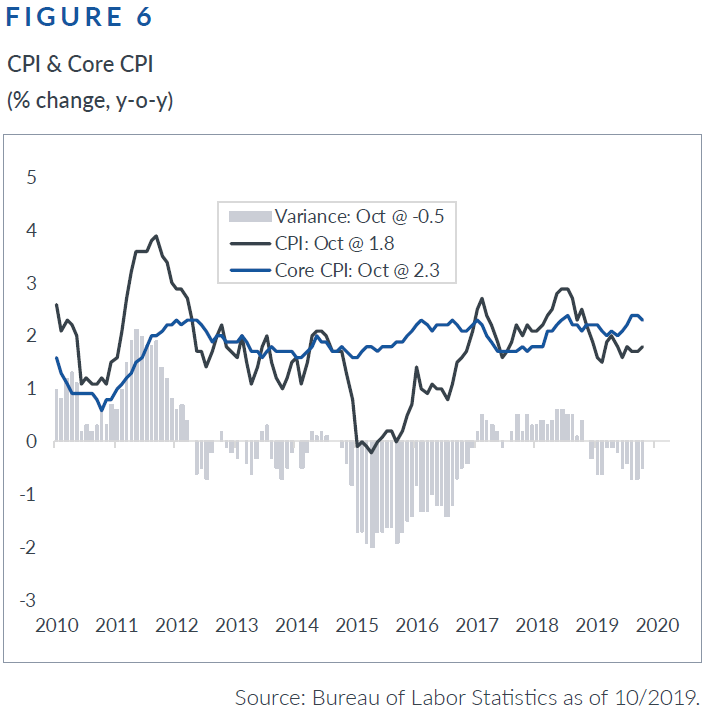 In the November release, the University of Michigan’s Consumer Sentiment Index came in at 95.7, which marks the third consecutive increase since August’s low of 89.4 and aligns this metric with the year-to-date average of 95.6 (see Figure 7). The August reading, the lowest since late 2016, was brought down by escalation of the trade war with China and the resultant new tariffs, which were followed by declines in the stock market and early stages in the impeachment process.

In the past few months, there have been some changes, including a calming in the trade spat, with the U.S. and China agreeing in principle to a “Phase One” trade deal, the Fed’s monetary easing (three times for a total of 75 bps), and improvement in many economic reports. Most notably, the consumer has been resilient.

Interestingly, looking back in history, the impeachment process does not appear to impact consumer sentiment. In 1998, when President Clinton was impeached, consumer sentiment was near all-time highs, with data that goes back to the 1940s. This was due to the strength in the labor market and the economy (we were in the midst of a 10-year expansion). That period contrasts to when Nixon resigned his presidency. The oil embargo was happening around the same time. Confidence fell sharply as consumers feared higher unemployment, inflation, and a slowing economy. 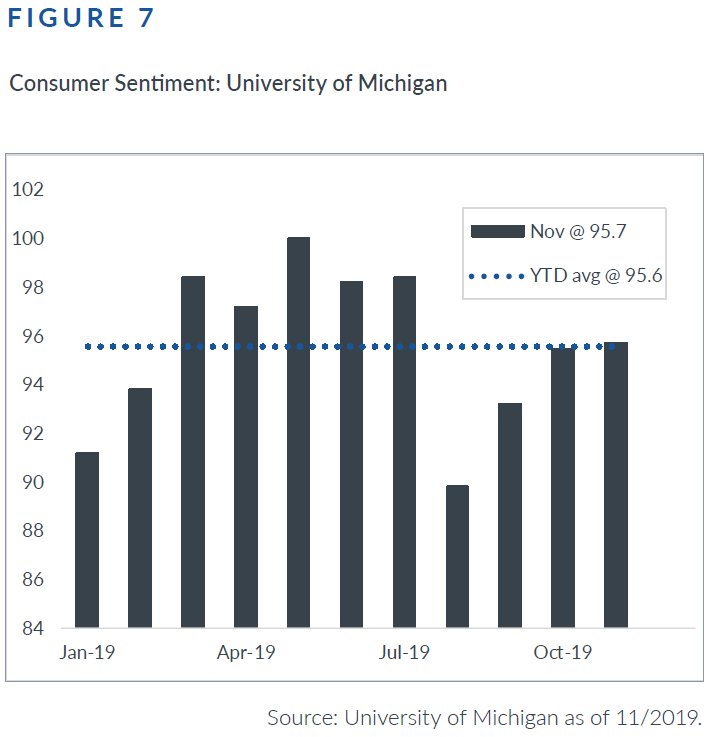 All investing is subject to risk, including the possible loss of the money you invest. As with any investment strategy, there is no guarantee that investment objectives will be met, and investors may lose money. Diversification does not ensure a profit or protect against a loss in a declining market. Past performance is no guarantee of future performance.

The Michigan Consumer Sentiment Index (MCSI) is a monthly survey of U.S. consumer confidence levels conducted by the University of Michigan. It is based on telephone surveys that gather information on consumer expectations regarding the overall economy.

The Consumer Price Index (CPI) is a measure that examines the weighted average of prices of a basket of consumer goods and services, such as transportation, food, and medical care. It is calculated by taking price changes for each item in the predetermined basket of goods and averaging them. Core CPI excludes energy and food prices, which can be very volatile and may bias the measure of inflation.

Indices are unmanaged, and one cannot invest directly in an index. Index returns do not reflect a deduction for fees or expenses.
You may also like...
On the Radar | Sep. 14, 2020

Where are we in the economic reopening?

What was the important statement that Fed Chair Powell made at the Jackson Hole Symposium?