Is the Pickup in U.S. Economic Growth Sustainable?

The Fed plans to continue with its gradualist approach to raising interest rates to bring them back to a “normal range.”

June’s yearly change in the consumer price index (CPI) jumped to 2.9%, the highest rate in more than six years.

The housing sector’s slow-motion recovery is due to many issues that arose from the Great Recession.

The U.S. economy grew 4.1% during the second quarter, the fastest pace of growth in four years. The critical question though is: How sustainable is this improvement? After all, the economy has experienced several short-term growth spurts the last few years before falling back to a more tepid trend line.

It’s not surprising to see that growth has accelerated recently. Massive government stimulus will do that. Households appear to have begun dipping into their accumulated savings from tax cuts. Meanwhile the increase in federal spending from the recently signed budget agreement is now hitting the economy. However, demand side, deficit-based stimulus isn’t a basis for sustained growth.

Fundamentally, there is some evidence that a modest rebound in the economy’s potential growth rate is underway. Based on Friday’s GDP report, productivity in the second quarter likely increased to 1.5%. The slow but steady gains in productivity since 2015 are probably not getting the attention they deserve. When added to labor force growth of 0.8%, this suggests that potential GDP growth may have risen back above 2%.

However, it will take a much more sustained acceleration to materially lift potential GDP. The economic rationale behind the tax bill, and what economists generally agree is the most pro-growth reform in the legislation, was the reduction in the corporate rate and the increased speed with which businesses can write off their investment costs. Both have the potential to stimulate further investment, which over time should make for stronger productivity.

It is still unclear how far the president is willing to go in raising tariffs on our trading partners. His recent agreement with European Union President Juncker has helped ease some fears that tensions were progressing in a one-way fashion toward a global trade war. But it’s too soon for trade watchers to breathe easy.

The agreement reached was limited in scope, short on details, and, most significantly, only applied to non-auto industrial goods, leaving out the important automobiles and agriculture sectors which have been the center of contention. What’s more, the ceasefire with the EU gives the U.S. more scope to focus its efforts on China, which could ramp up trade tensions.

Even without fiscal stimulus, the economy remains on solid footing and able to withstand some drag from escalating trade actions. Most leading models suggest that the macroeconomic effects of even the full array of potential U.S. tariffs, together with foreign retaliation, would be relatively manageable in terms of the direct economic impact. But these models are notoriously bad at capturing second-order effects and uncertainty.

In fact, tariffs have already acted to distort economic activity. For one quarter, at least, trade tensions have actually led to faster growth, as foreign buyers rushed to stock up on American goods before tariffs took effect. The resulting surge in exports alone added a full percentage point to GDP. This boost, however, is surely temporary, and net trade will likely turn into a drag on economic growth in the third and fourth quarters.

What is more troubling is that trade policy uncertainty is beginning to dent what has been a very strong increase in business confidence, possibly leading companies to delay further investment. Investment growth in Q2, while still strong at 7.3%, was weaker than the 11.5% first quarter gain, and survey measures are now reporting at least a modest pullback in capital spending plans, with trade uncertainty cited as the major reason.

It’s far too early to fully assess whether recent tax policy changes will be effective in lifting economic activity to a sustainably higher rate. For now, economic fundamentals remain strong, and growth is expected to continue near a 3.0% pace in the second half of the year before the short term boost from fiscal stimulus begins to fade. But if an escalation in trade tensions begins to shake business confidence and the recent resurgence in capital investment begins to decline, the president runs the risk of short-circuiting what was to be the biggest long-term benefit of his tax bill. 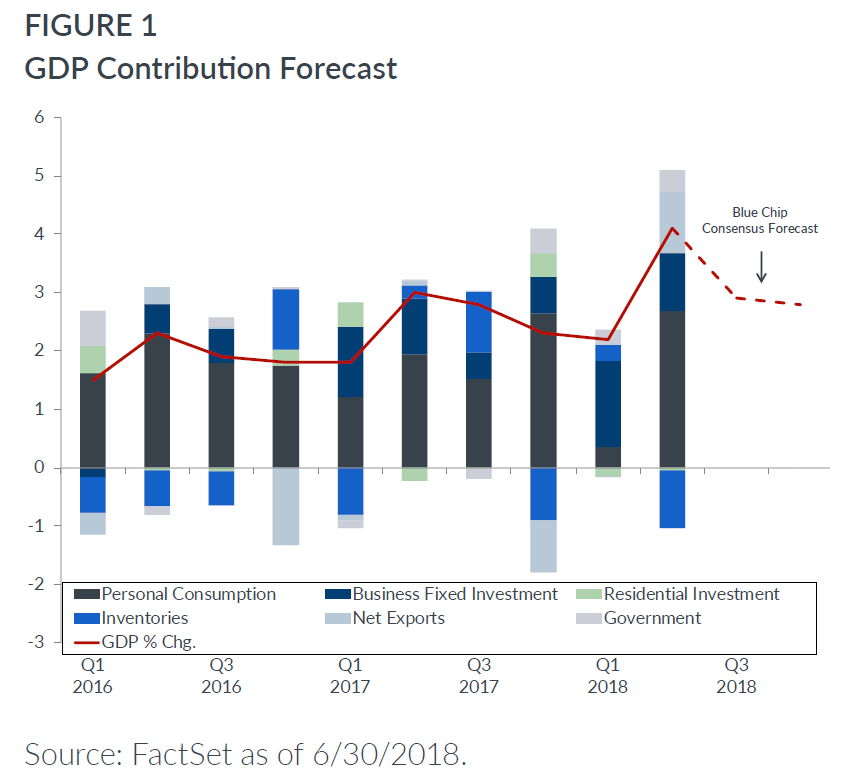 Federal Reserve Chairman Jerome Powell gave an upbeat assessment of the domestic economy at his semi-annual address to Congress. His plainspoken and straightforward comments echoed the FOMC’s recent statement from just a couple weeks back. Economic activity was described as “solid” and the labor market as “robust.” He also believes that inflation will remain close to the Fed’s target level of 2.0%. Powell implied that any downside risks from trade policy could be offset by continued upside risks to activity from the recent fiscal stimulus.

Our outlook is that the Fed will raise interest rates at its September and December meetings, which is consistent with its projection. At that point, the median federal funds rate will be at 2.375%. This will be near the natural interest rate (the theoretical level of real interest rates that does not cause economic expansion or contraction). That rate is currently 0.56%. It gets compared the real (inflation adjusted) federal funds rate which is -0.03% (federal funds rate of 1.875% minus the inflation, core PCE, rate of 1.9%) (see Figure 2). Assuming no change in yield to the 10-year treasury, the slope of the yield curve will be close to flat. While neither of those events will prevent the Fed from raising interest rates further, especially if it believes future increases are warranted, it may take pause, as future interest rate hikes will likely have a greater impact on the economy than past hikes.

Overall, the Fed plans to continue with its gradualist approach to raising interest rates to bring them back to a “normal range.” It has no plans to raise them to a level that would be restrictive to further economic growth. 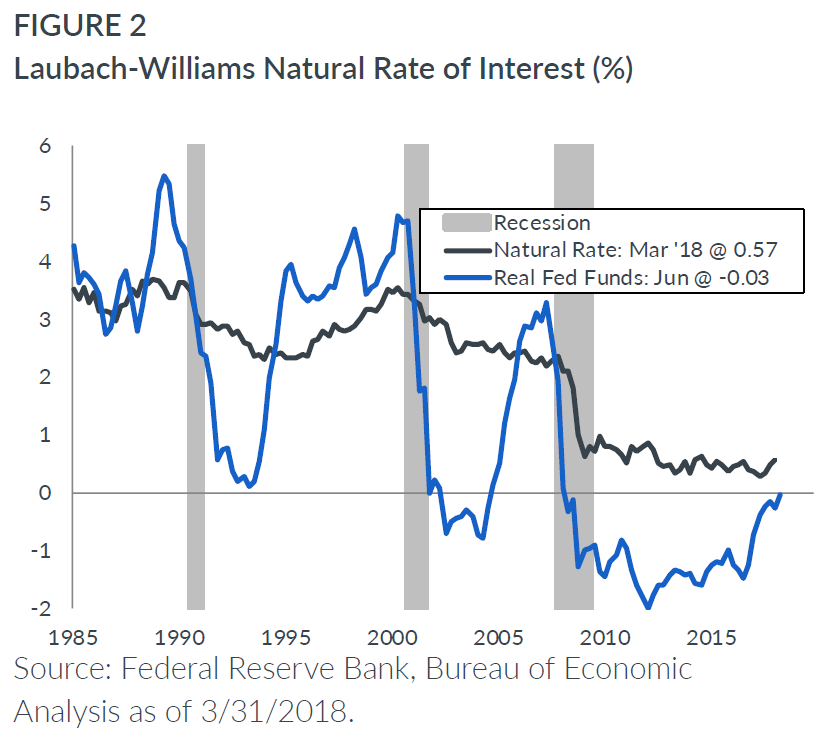 Economists are running out of adjectives to describe the strength of the labor markets. The labor force now totals 155.6 million workers, which is 11.5 million more than the previous peak and 17.6 million more than during the worst periods of the financial crisis.

Nonfarm payrolls increased 213,000 in June. The year-to-date average monthly gain is at 215,000, which is slightly ahead of the 184,000 pace of last year. In a separate survey, the unemployment rate ticked up to 4.0%, from May’s 3.8%, but that was due to over 600,000 workers joining the labor force. Despite this increase, business surveys continue to report concerns that employers are having a hard time finding qualified workers.

Many of the supplementary employment reports are also showing significant improvements. The number of workers who are working part time because of their inability to find a full-time position has fallen to cycle low levels, and so has the number of those too discouraged to bother searching for work.

Most impressive is the diffusion index, which measures the sectors that have job gains versus those with job losses; any number above 50 marks more job sector gains than losses. This metric is currently 65.5, signaling that hiring is very broad based among the major sectors (see Figure 3). 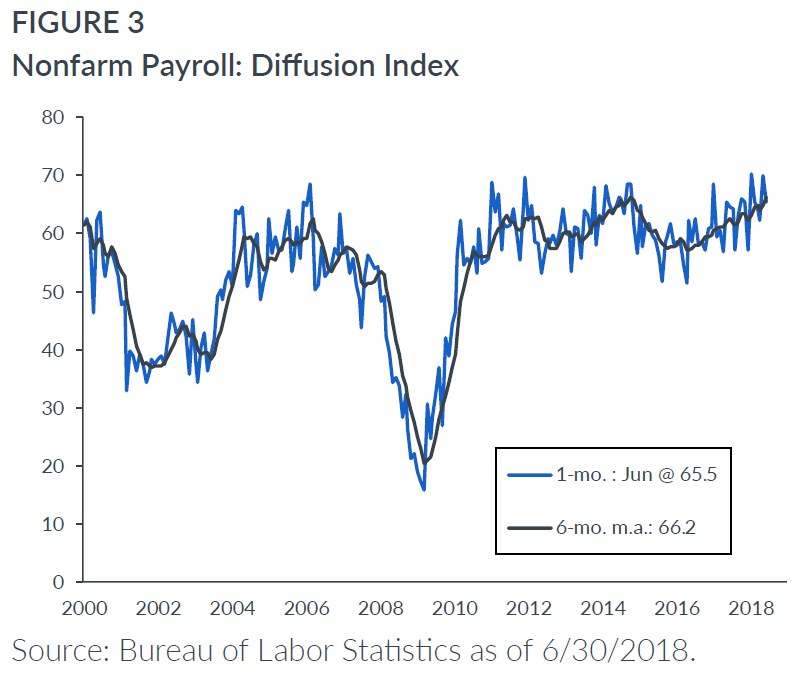 June’s yearly change in the consumer price index (CPI) jumped to 2.9%, the highest rate in more than six years. This may sound alarming, but it is below the cycle high reading of 3.9% in June 2011. In fact, inflation has been comparatively low throughout this expansion, averaging just 1.6%. Over the past year, inflation has firmed, with price pressures coming mostly from gasoline (24.3% y-o-y), rent (3.6% y-o-y), and medical care (2.5% y-o-y). These higher levels of inflation have not yet concerned the Fed, nor will they cause the Fed to modify in any way its planned interest rate increases. This is because the Fed’s favorite inflation metric is Core PCE Price Deflator, which as of June is at 1.9%. The Fed relies on this inflation metric mostly because it has a far smaller weighting to housing compared to CPI and does not include food or energy prices. Using this metric as a baseline from which to evaluate the current situation, the Fed does not expect inflation to move much from the current levels.

Although the yearly change is up, the more recent trend of the past three months is down from levels earlier in the year. The three-month annual rate of change for Core PCE is just 1.2%, compared with 2.3% for the three-month change ending in February (see Figure 4). 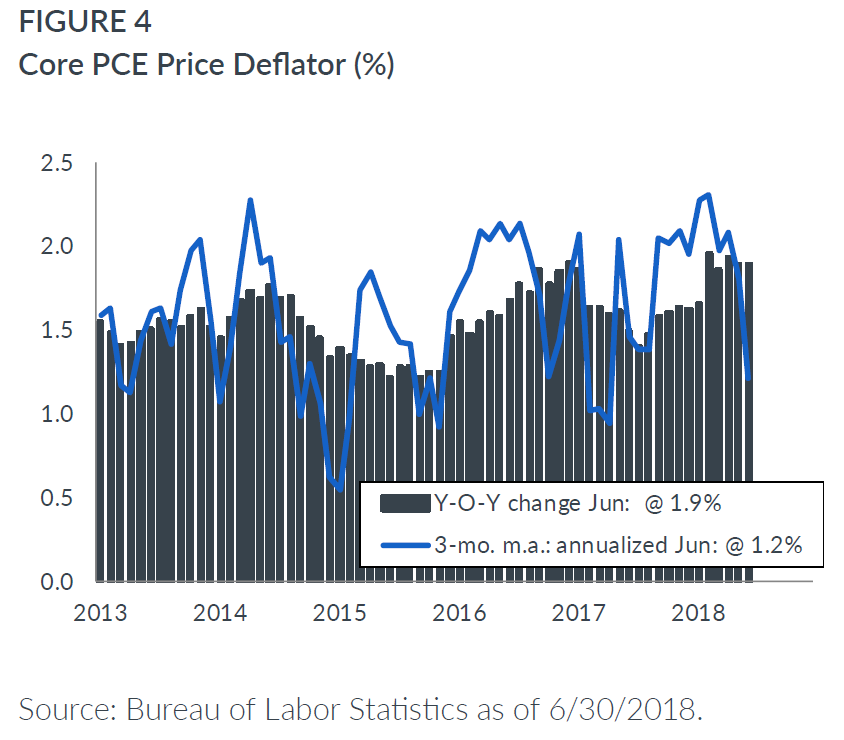 Throughout this entire expansion, the housing sector of the economy has not achieved the importance it had compared to past expansions, especially when compared to the 2001-2007 expansion. Then, “residential investment” peaked around 6% of all economic output. In this expansion, it has averaged only about half that level at 2.9% and currently stands at 3.4% (see Figure 4).

This slow-motion recovery is due to the many issues that arose from the Great Recession. The Dodd-Frank Act forced lending institutions to have stricter credit standards for mortgage lending, and the massive amount of Quantitative Easing by the Fed forced interest rates lower, allowing homeowners to refinance at record low interest rates. In addition, the recovery, now in its tenth year, has helped to push up home prices, which in turn has helped to grow household equity. These homeowners have been less willing to sell their homes, reducing supply in the market. The flip side of this lack of supply has been a steady appreciation of home prices.

There are some technical reasons for the slow growth rate this year. The housing sector surged in Q4 2017 in a post hurricane burst of building. Without that demand this year, the first half of this year has been relatively flat. The expectation is for a pickup in the second half of the year. Although prices and mortgage rates are higher, demand for homes is still strong. 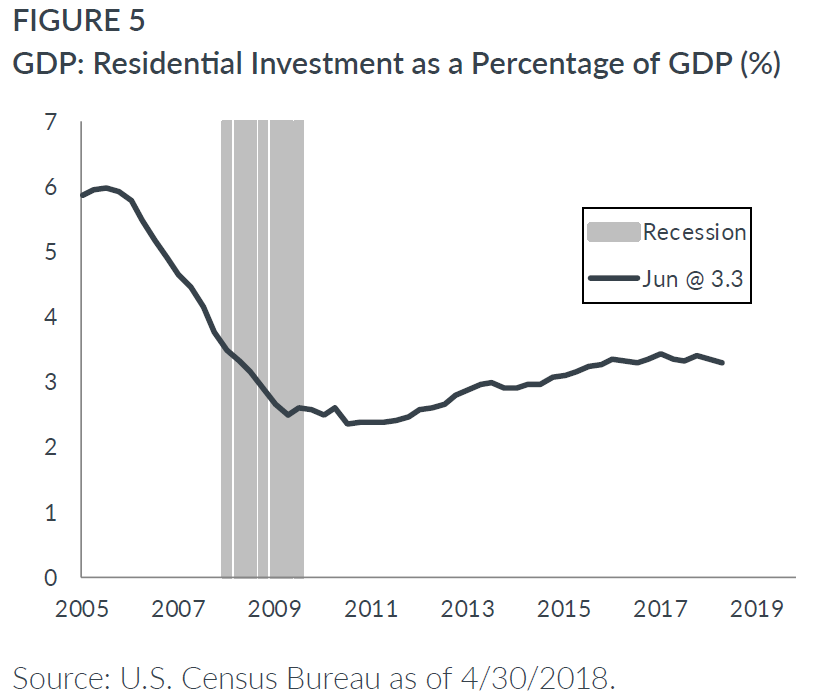 The Fed plans to continue with its gradualist approach to raising interest rates to bring them back to a “normal range.”

June’s yearly change in the consumer price index (CPI) jumped to 2.9%, the highest rate in more than six years.

The housing sector’s slow-motion recovery is due to many issues that arose from the Great Recession.