When the books finally close on 2018, the global economy will have likely posted its best annual back-to-back stretch since the end of the financial crisis. But the high-water mark on growth is probably behind us. The synchronized global expansion that began roughly two years ago has peaked, and signs are emerging of slower, more divergent growth among world economies.

Indeed, there is mounting evidence that the global economy has entered the later stage of the business cycle, where growth slows, inflation picks up, interest rates rise, and asset returns become more volatile. Still, late-cycle environments can last a long time if major policy mistakes are avoided.

Potential policy mistakes on trade and interest rates remain the key risks to the outlook. Despite progress this year in some areas on the trade front, such as the renegotiated NAFTA agreement, tensions between China and the U.S. are unlikely to be resolved anytime soon. Uncertainty surrounding the issue has already begun to weigh on overall economic activity and in particular business investment, reducing some of the key expected benefits of corporate tax reform.

Nevertheless, the impact of current trade disputes by themselves on the U.S. economy and corporate profits should be manageable. Far more important is the interest rate backdrop. Rising rates are a sign of economic strength, and rates continue to be low by historical standards, but the effect of higher borrowing costs is already showing in rate-sensitive sectors of the economy, such as housing and autos.

Importantly, inflation pressures remain subdued, and productivity has shown some recent signs of improvement. This should give the Fed flexibility to respond to any future hiccups in growth. Federal Reserve Chairman Jerome Powell’s recent comments also provide some reassurance that policymakers are focused on the risk of overtightening policy and ending the cycle prematurely.

For now, neither overheating risks nor private-sector imbalances—the classic causes of U.S. recessions—appear concerning. Overleverage in some areas of the non-financial sector bears watching, but overall corporate fundamentals remain healthy. Likewise, households are well positioned to withstand higher rates. With debt servicing costs still low and delinquency rates stable, households’ debt burdens are unlikely to emerge as a source of trouble, even as rising interest rates cause economic growth to slow further.

What a difference a year makes. Just 12 months ago, equity markets around the world were riding high with global economic momentum building and prospects of significant U.S. tax cuts in the pipeline. This year, the atmosphere is much less bubbly. However, recent negative sentiment has not been about the direction of economic and corporate profit growth, but on the magnitude. For investors, “good or bad” is not what is often reacted to. Rather, it’s “better or worse” that initially moves markets. It may take some time, but we expect investors will readjust expectations for still healthy, albeit slower, fundamentals over coming months, allowing the long-running bull market to continue. 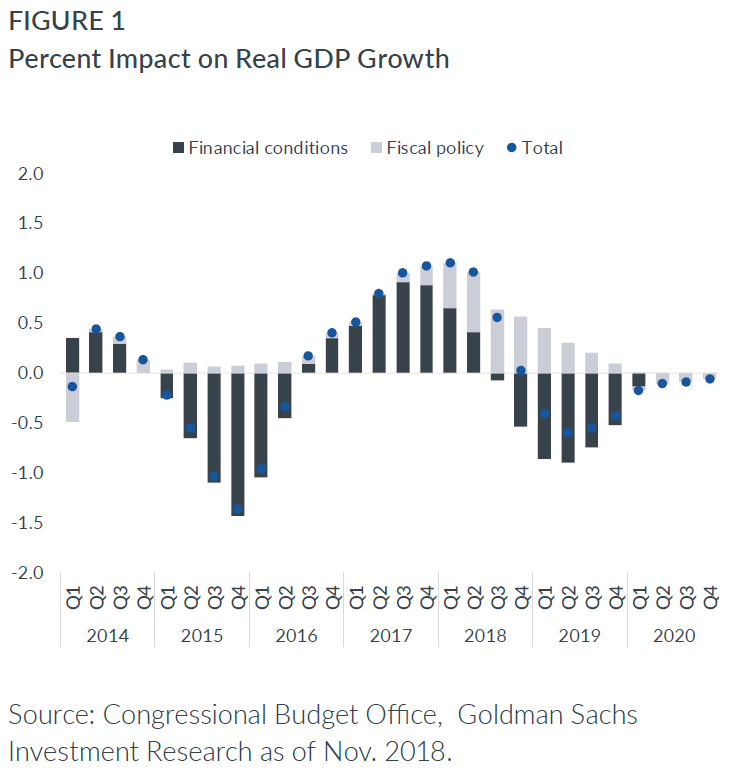 The past two months have been a bit of a rollercoaster ride for Fed watchers. On October 3, Powell made an unscripted statement that the federal funds rate was a “long way” from the neutral level, indicating that the Fed would keep raising rates for a while. This, along with other events around the globe (such as the rapid drop in oil prices, Germany and Japan reporting negative Q3 GDP, trade tensions, etc.) led to increased volatility in several asset classes, most notably the U.S. stock market.

But on November 28, in a speech to the Economic Club of New York, Powell gave a statement that was perceived as more dovish. Despite 14 pages of prepared remarks, the market focused on one statement: That the federal funds rate is “just below” the broad estimates of neutral (see Figure 2). The neutral rate is the interest rate that neither stimulates nor constricts economic activity. When interest rates are neutral, the economy is on a sustainable path. It has been below the neutral rate since 2008.

The Fed is expected to continue with their gradualist approach to raising interest rates (one more time in December and several times in 2019 and 2020). But the markets are no longer fearful that rates will be brought up to levels that are significantly above the neutral rate. In other words, the Fed is trying to walk a razor’s edge between raising interest rates enough to stave off an asset bubble without raising them too much, which could cause a severe economic slowdown. 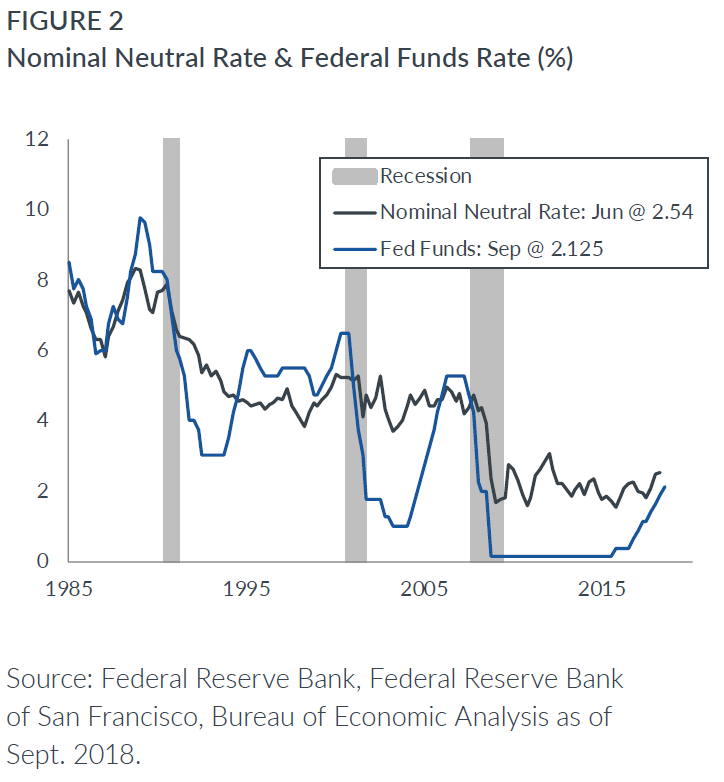 The fundamentals of the labor market continue to shine bright. Last month marked the 97th consecutive month of job growth, extending an already record-making streak. Even more impressively, the growth rate is strengthening. So far this year, the monthly gains in payrolls have averaged 213,000, up significantly from 182,000 in 2017 (see Figure 3). Economists are running out of superlatives to describe this strength.

Despite the impressive news, this upward trajectory is not expected to be sustained. While many companies have benefited this year from major tax cuts, using those savings to hire additional workers to help expand their businesses, it is important to remember that they will not be getting tax cuts again next year.

The unemployment rate, at a 49-year low of 3.7%, is putting pressure on wages. Average hourly earnings have grown 3.1% in the past year. This higher level of wages is pulling Americans back into the workforce. The share of Americans in their prime working years (25-54) who are working, or looking for work, is at 82.3%, the highest level since 2010. 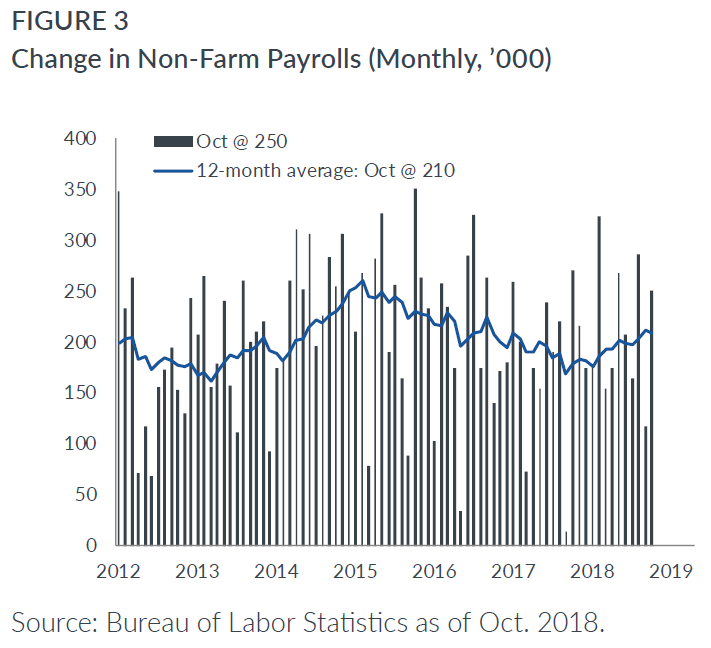 Price pressures appear to be under control. The Consumer Price Index, which hit a recent peak of 2.7% in July and has been drifting downward since, currently stands at 2.5%. Part of that decline is associated with commodity prices, which have been falling for some time and currently stand at a 17-month low. Most notably of late is the sharp decline in energy prices. Oil prices, which have been falling due to concerns of excess supply, are down 33.3% from the recent high in early October of $76.41. Interestingly, natural gas, which is a much smaller component within the energy sector, has seen prices balloon. They are up 64.6% in the past year, and 39.3% in the past month. As we head into winter, it is the opposite as inventory levels are at the lowest level in more than a decade.

The drop in oil prices is changing the market’s view of the future long-term direction of inflation. The “TIPs Breakeven” measures the market’s expectation of inflation over a period of time by calculating the difference in yield of a nominal fixed-rate bond and the real yield on an inflation-linked bond of a similar maturity (such as a Treasury inflation-protected security, or TIPs). Based upon this calculation, the average inflation rate for the next 10 years is now below 2.0%; this is the first time it has been below that threshold since December 2017 (see Figure 4). 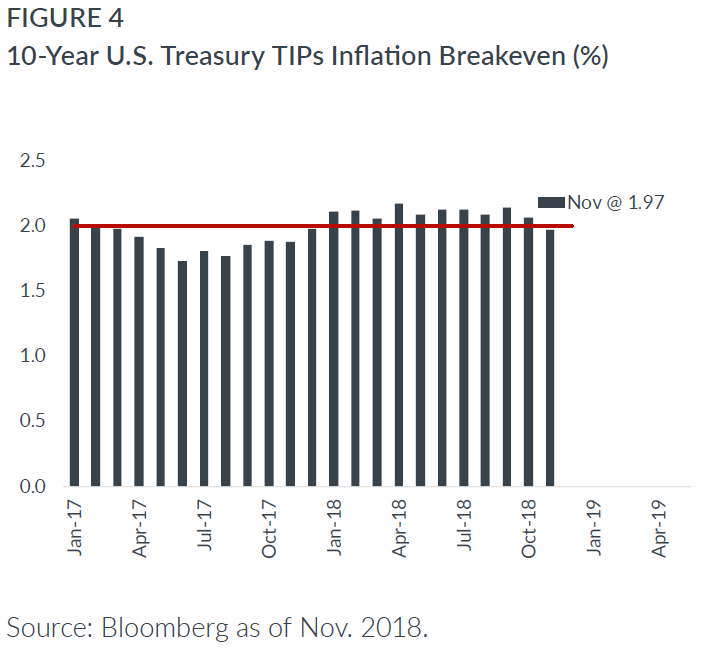 Back in November 2016, OPEC and Russia decided to reduce their crude oil production to limit the amount of excess supply in the market that had been driving prices lower. The plan worked. Back then, oil was at $48 a barrel, and it has since rallied all the way up to a cycle high of $76 per barrel in early October 2018. At that time, we were reading articles warning the markets of $100 per barrel of oil. Since then, prices have plummeted. Oil prices have fallen to just $50.93/barrel, down 33.3% from that October 3 high. The driving force has been the excess supply of oil. For example, in the United States, oil storage is at a one-year high.

For consumers, this will be a boon just in time for the holiday shopping season and is expected to extend the growth rate of consumption for a third consecutive quarter. However, there is a flip side to that coin. With the advent of fracking, the United States is now a major producer of crude oil. The lower oil prices reduce the incentive for businesses to invest in oil exploration and extraction, and that will be a drag on GDP. To this point, there are many comparisons to 2015, when oil prices fell and economic growth slowed significantly, in part due to the severe reduction in business investment (see Figure 5). But this time is different. This time the drop in oil prices is not nearly as severe (back then, they fell from $100 to $30/barrel); frackers are more efficient at extracting oil at a lower price point; and the overall economy is benefitting from strong employment growth and the enormous fiscal stimulus. 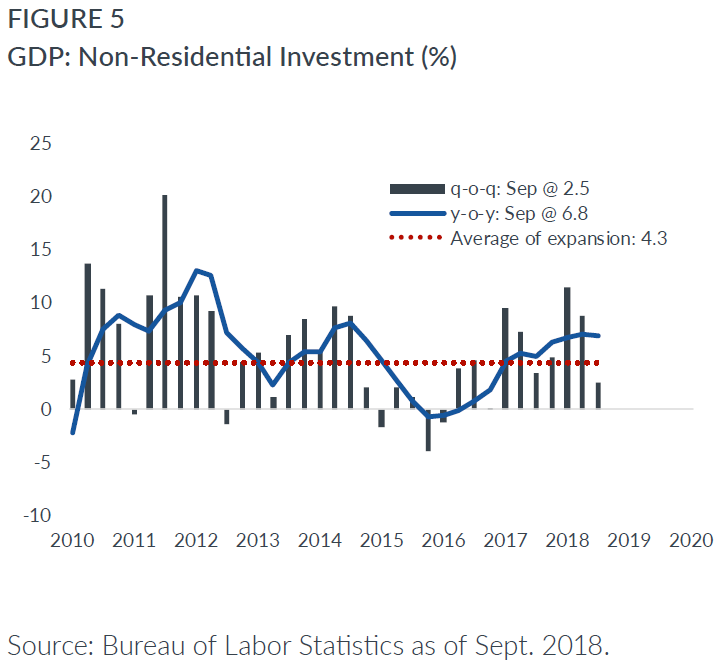 Indices are unmanaged, and one cannot invest directly in an index. Index returns do not reflect a deduction for fees or expenses.
You may also like...
| December 2022