Core inflation has been below the Fed’s target rate of 2.0% since early 2012

This past quarter had retail sales growing at an annual rate of 7.8%

After exceeding expectations in 2017, the synchronized global upturn shows no signs of slowing down. Measures of investment, manufacturing, domestic demand, and trade are all continuing to experience a resurgence. Indeed, strong growth and low inflation conditions have worked to create a sweet spot for the global economy. But the best may be still to come as economic momentum appears to be building around the world.

In the U.S., recently passed tax cuts are boosting growth expectations for an economy that already has considerable momentum going into 2018. Confidence is booming, and business surveys are indicating some of the best economic conditions for the eight-year expansion thus far. Admittedly, fourth-quarter GDP was slightly slower than anticipated, but underlying demand rose at a very strong 4.3%, the strongest pace in three years. In addition, the fact that household consumption rose by 3.8% and fixed investment at more than twice that pace bodes well for growth in the quarters ahead.

Meanwhile, growth in other economies has also strengthened. The Eurozone, late in joining the expansion, has begun to make up in speed what it had lost in time. Japan has similarly shaken off its lethargy and moved ahead with above trend growth. In the developing world, China continues to defy fears of a hard landing as authorities manage the difficult transition to a more advanced economy. Even Brazil and Russia, whose economies had been mired in commodity-driven recessions for some time, are growing again.

Although sustained self-reinforcing growth has been a regular feature of global expansions since the 1960s, it is new to this expansion. The bounce back from the global financial crisis in 2010 was cut short by a rapid turn away from fiscal stimulus and the European sovereign crisis, while the rebound that began to take hold in mid-2013 was aborted by a sharp credit and trade related slowdown in emerging market economies. More generally, though, post-traumatic stress held back business spending and dampened households’ response to improving labor markets and financial conditions.

The lifting of the long shadow cast by the global financial crisis did not happen by accident. Rather, it took a combination of time, balance sheet healing, and extraordinary monetary policy accommodation to help resolve the excessive credit growth and macroeconomic imbalances of the previous decade. Now, these developments are promoting a more traditional business cycle dynamic, where a positive feedback loop linking growth and demand to supportive financial conditions and rising sentiment delivers a synchronized global upturn.

Experience shows that this loop can be sustained for some time, but as we get later in the cycle, stronger growth comes at a price. In a little reported development, the World Bank recently announced that the global output gap, which measures the amount of spare capacity in the international economy, has finally closed (see Figure 1). After eight years of aggressive monetary accommodation throughout most of the world, central bankers are now in various stages of reversing course. With the shift from excess supply to excess demand, the risk is that inflation surprises more significantly and forces central bankers to raise interest rates more quickly than anyone is expecting.

This is what has ended many past economic and market cycles. There are several reasons why this hasn’t happened so far, including low productivity growth, the recent rise in labor force participation, and diminished bargaining power. But the risks of a cyclical inflation overshoot are rising given the globally synchronized nature of the expansion, additional fiscal stimulus, recent rises in commodity prices, and very easy financial conditions.

Still, all signs point to this process moving gradually and the long expansion shows few signs of financial market stress or serious imbalances. Demand is rising, liquidity is plentiful, and credit is readily available at low cost. Eventually, the sweet spot will most likely turn sour. But for now, it’s hard to be pessimistic about the outlook for 2018. 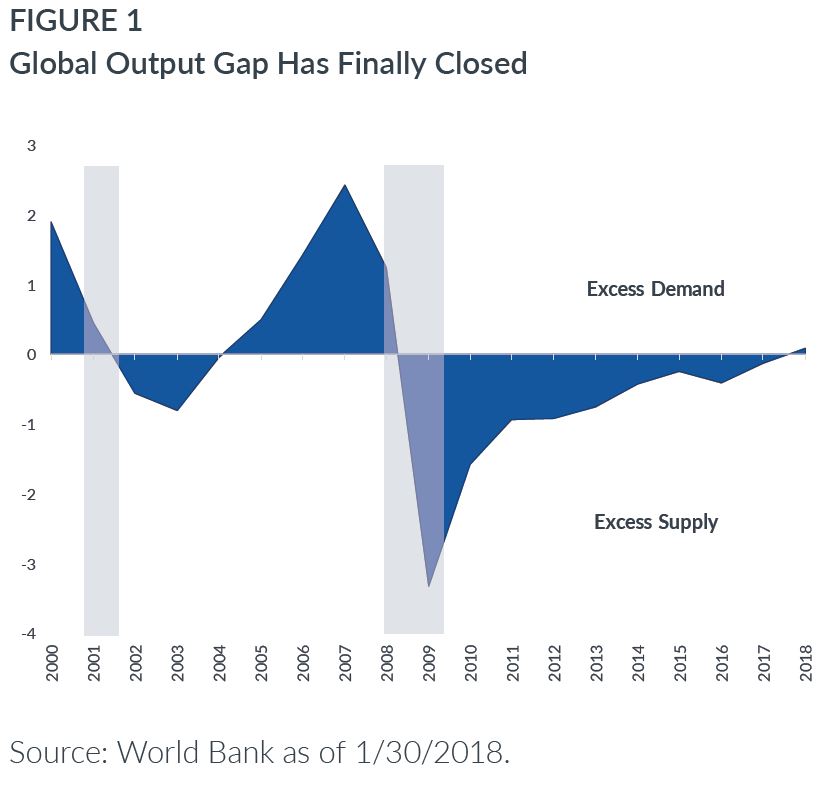 At their meeting in December, the Fed significantly increased the projection for economic growth in 2018, moving it from 2.1% to 2.5%. This in part reflects the benefits of the new tax cuts, which include a hefty increase in deficit spending.

All of this bullish news signals to the Fed that it can continue on its path of “interest rate normalization.” With the median federal funds level currently at 1.375%, following five rate increases in this expansion, the Fed is projecting three rate increases this year, ending the year at 2.125%. It plans to make two more hikes in 2019 and one hike in 2020. That would bring terminal federal funds rate to 2.875%. 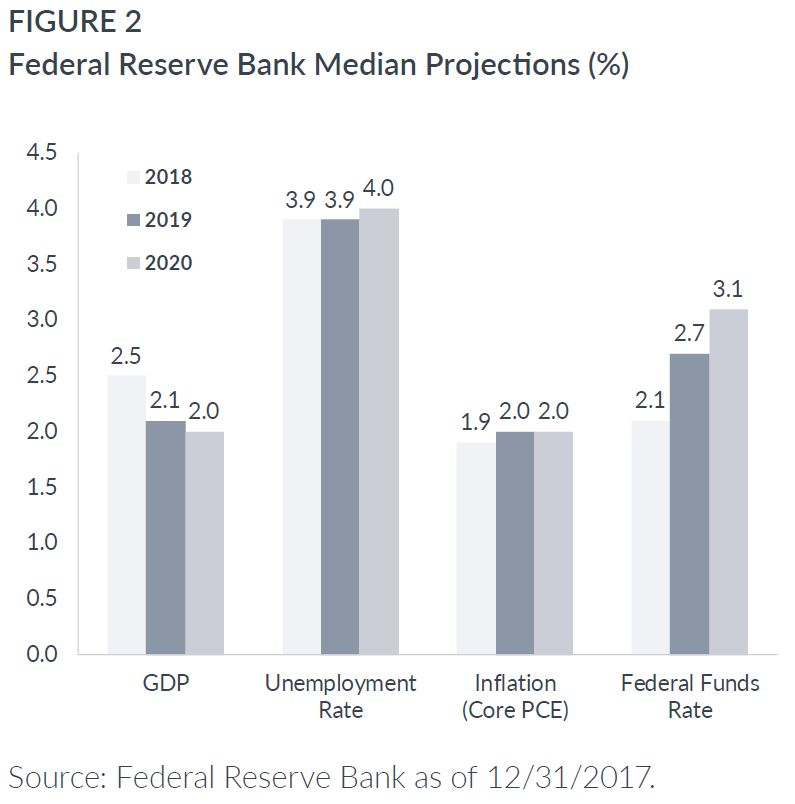 The unemployment rate remained at 4.1% for the third consecutive month. It stands at a level not seen since the early 2000s. Non-farm payrolls grew 148,000, marking the 87th month of job gains, an unparalleled stretch of growth. Although the annual rate of job growth has been slowing it recent years (see Figure 3), it is outpacing the increase in the working-age population, thus continuing to put downward pressure on the unemployment rate.

One reason for this slowing trend is that firms are finding it more difficult to find qualified candidates. More workers are sorely needed as the economy continues to expand. With the unemployment rate below the natural rate (4.9%), firms have had to increase their offers to attract workers from other firms; there is some anecdotal evidence of this at the professional level.

Baby boomers are heading into retirement, offsetting the growth from younger generations entering the workforce. This has kept the participation rate relatively unchanged since 2015. Continuing their expansion will require businesses to pull workers from the sidelines into the labor market. 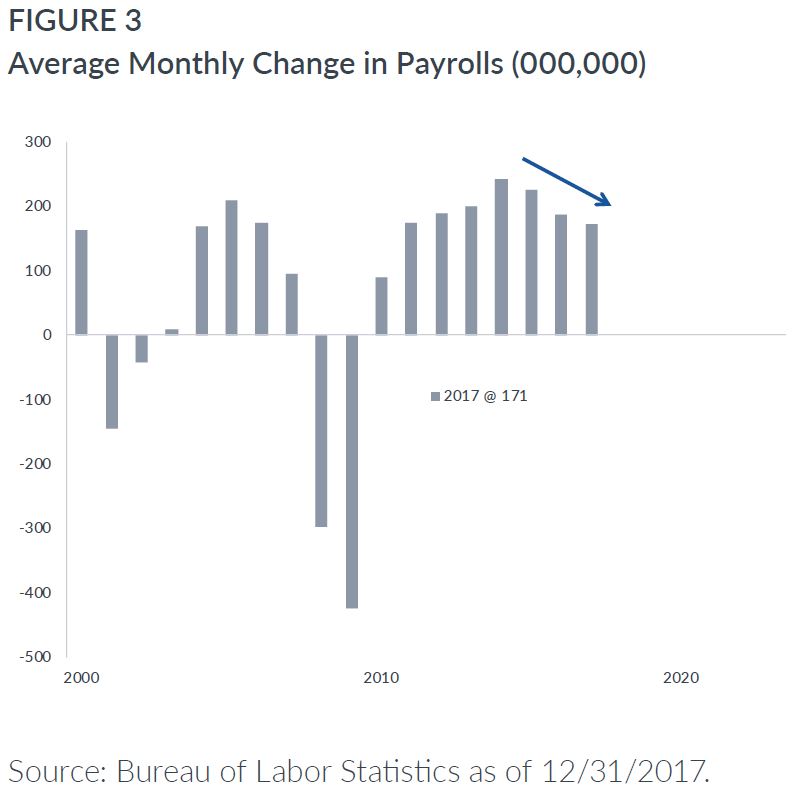 Core inflation, which removes food and energy prices, is the preferred way in which the Fed looks at inflation, which has been below the Fed’s target rate of 2.0% since early 2012. It has spent most of this past year in a narrow range and well below the trend of the previous few years (see Figure 4). This was due to the sudden drop in prices in a few categories (used cars, mobile phone plans, medical care, etc.). Those price drops are coming up on their one-year anniversary and will soon drop out of the yearly calculation, thus putting upward pressure on the core-inflation rate.

Away from core inflation, oil prices have been on a steady upward march; it has almost doubled in price in the past two years. This has been brought on by increased demand, the synchronized global expansion, reduced supply from the OPEC and Russia, and heightened geopolitical risk. This is not expected to increase significantly from these levels as new supply from the U.S. will come online as a result of the higher prices. 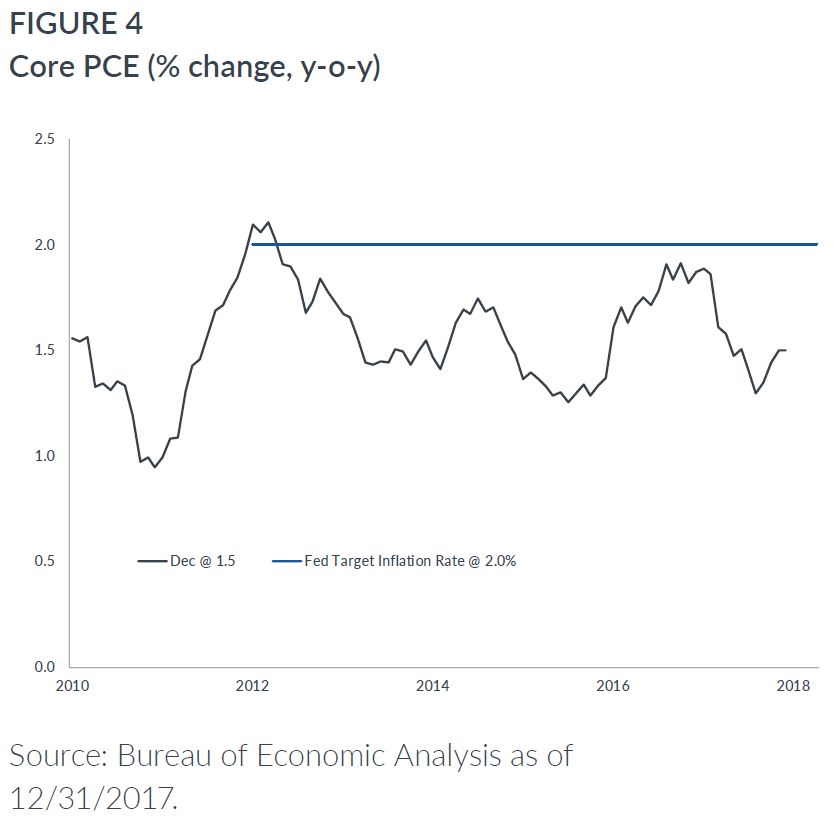 With consumption making up about two-thirds of GDP, there is an acute focus on the monthly retail sales report to get an idea of the growth rate of the GDP, which will be released in the first month of the following quarter. This past quarter had retail sales growing at an annual rate of 7.8% (see Figure 5), helping to give a boost to fourth-quarter GDP expectations. A major part of the surge was a result of the disruptions caused by the hurricanes in Texas, Florida, and Puerto Rico. It has been reported that more than 300,000 cars were destroyed, and most have been replaced.

Retail sales started the year on a weak note, growing at just a 1.7% annual rate in the first quarter, but it has been rallying since then. This has helped lift the annual growth rate, which has been on an upward trend since June. This growth is a result of strong economic fundamentals as noted by improving labor market, robust consumer confidence, and rallying stock market. All of this brought on the best holiday shopping since 2005. 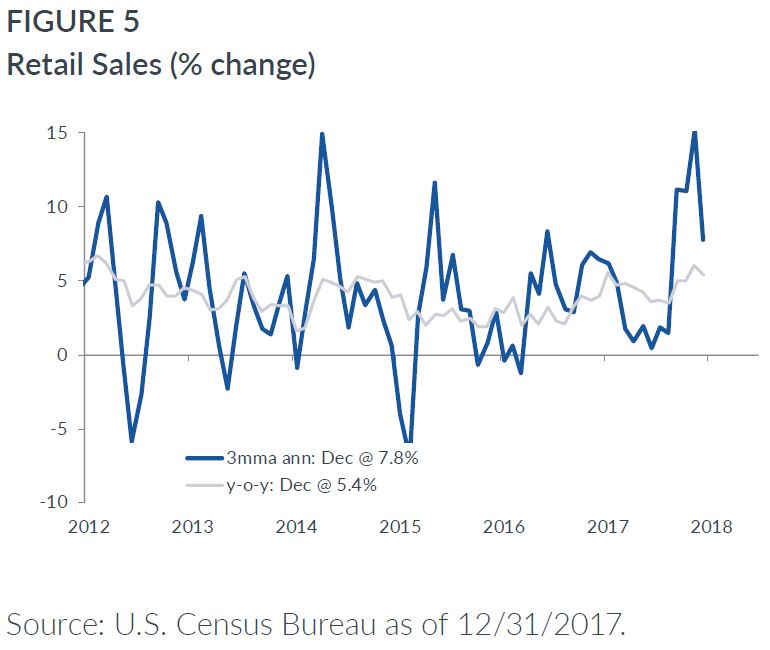 Core inflation has been below the Fed’s target rate of 2.0% since early 2012

This past quarter had retail sales growing at an annual rate of 7.8%

Indices are unmanaged, and one cannot invest directly in an index. Index returns do not reflect a deduction for fees or expenses.
You may also like...
Market Perspectives | Jun. 21, 2018

How tight is the job market?