Overall, the Fed plans to continue with their gradualist approach to raising interest rates to bring them back to a “normal range”

The Fed is not concerned with inflation getting out of control

The unemployment rate fell in May to 3.8%, the lowest level since December 2000

The U.S. economy has come a long way since the Great Recession ended nine years ago this June, and all things considered, we think the expansion is looking pretty good for its age. At a point where all but one prior post-war expansion had already succumbed to a recessionary downturn (Figure 1), economic fundamentals remain encouragingly solid. More Americans are working today than ever before, consumer balance sheets are healthy, housing continues to steadily improve, and despite the recent pullback, many asset prices have appreciated to record highs. Indeed, businesses and households are more optimistic about the future than they have been for years.

Not only do most indicators suggest economic fundamentals remain strong, but expectations are that U.S. GDP growth will pick up in coming months as tax savings start to add up for households and as higher government spending begins to filter through the economy. Of course, no expansion lasts forever, and our sense is that we are now in the later stages of this one. Still, it is important to remember that expansions don't die of old age. Rather, they are usually ended by a combination of rising imbalances and significant central bank tightening.

Much of the expansion's durability can be explained by its relative weakness historically, particularly given the extent of the prior downturn. Instead of robust growth, aggressive borrowing, and rising inflation, we have had almost the opposite conditions: modest growth, a restrained pace of borrowing, and low inflation.

For the most part, the private sector has not overindulged and given rise to the overheating pressures that have historically prompted an aggressive and ultimately recession-inducing tightening by the Fed. Even today, though wages are finally beginning to improve, classic factors such as comparatively low energy costs and commodity prices have combined with changing demographics, global competition, and newer, technology-driven developments to keep inflation under wraps. Meanwhile, investment, both housing and capex, is increasing, but remains low historically relative to GDP.

As a result, interest rates are not being pushed higher as they were in past cycles. In fact, the Fed would prefer higher inflation, and it's likely policymakers will be inclined to let the economy run a little hotter than necessary, rather than risk tightening financial conditions too fast and ending the expansion prematurely.

Recessions most often tend to unfold when the cost of doing business and managing debt becomes punitive. No question, rates are now rising, and at some point, increases will undermine production and consumption. But for now, credit generally remains widely available, and interest expense is not a restraint on spending or investment.

In recent months, economists have been scanning the horizon for potential areas where vulnerabilities may be building another crisis, identifying everything from subprime auto loans to rising corporate debt as potential risks. Though risks have increased in sub-sectors of household and corporate credit, so far they remain relatively small and insulated from the broader economy.

Indeed, after years of deleveraging and firming income prospects, the household sector appears well equipped for higher interest rates. And while corporate overall debt may have returned to Great Recession levels, excessive debt has not. S&P estimates that 27% of U.S. corporate debt is from "highly leveraged" companies, compared with 42% in 2007.

It also helps that Corporate America is minting money right now, aided by strong U.S. and global demand as well as the recent tax overhaul that has created a huge windfall for many companies. Strengthening earnings growth should help minimize any modest uptick in borrowing costs, while tax savings, as well as repatriated foreign profits, can help to pay down debt.

With continued dysfunction in Washington, heightened trade tensions, and negative developments in Europe, the recent nervousness among investors is understandable. Further policy uncertainties are likely to prevail over the near term and may remain a weight on market sentiment. But bear markets outside recessions are rare, and there continues to be little reason to doubt the ongoing modest U.S. expansion. Despite nine years of uninterrupted growth, few serious cracks in the economic foundation have developed, and given the general lack of excess in the economy, we would not be surprised to see it continue for some time longer. 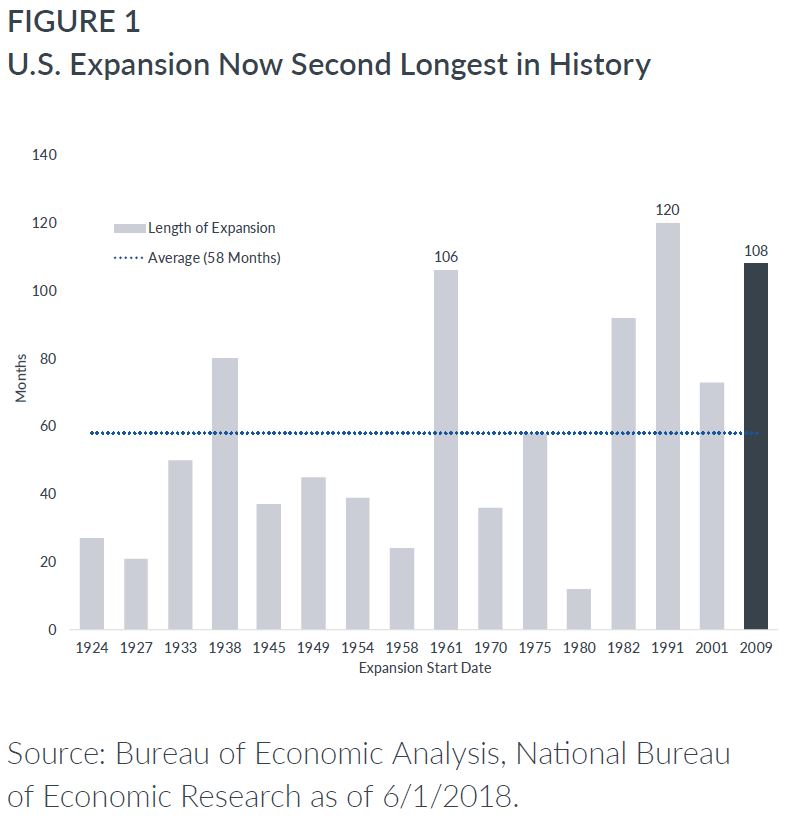 In the minutes from the recent meeting of the FOMC, the group within the Fed that determines monetary policy, the FOMC signaled its intentions to raise the federal funds rate at the June 13 meeting. This increase would mark the second of three planned hikes for this year. Assuming a 25 bps hike, which has been the trend in this tightening cycle, the median funds rate would increase to 1.875%.

Most of the policymakers believe that the recent boost in fiscal policy will push the economy up in the near term. Following this, they expect the economy to move back down toward a trend growth rate range of 2.0% to 2.4% (Figure 2). They also commented that a trade war is a threat to growth prospects. Some policymakers mentioned concerns from regional business contacts about the possible adverse effects from tariffs and trade restrictions.

Overall, the Fed plans to continue with its gradualist approach to raising interest rates to bring them back to a “normal range.” It has no plans to raise them to a level that would be restrictive. 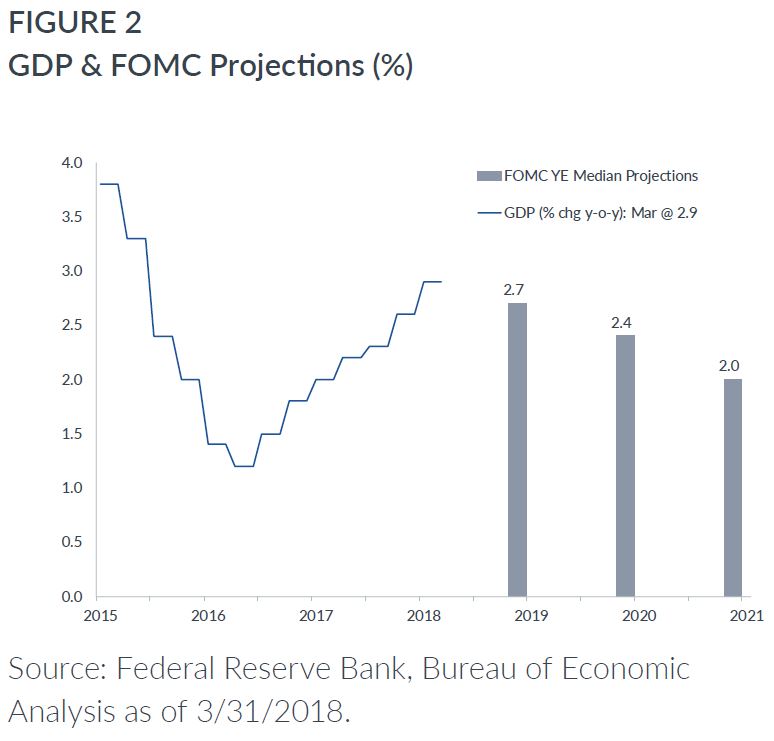 With such a low unemployment rate, there are fewer applicants for each job opening. In February, the most recent data collected indicates that there were 1.1 unemployed persons for every job opening. That is down from 6.7 back in July 2009, a month after the end of the Great Recession. This move gives the advantage to job hunters searching for a job, allowing for a stronger bargaining position for workers, especially in regard to pay. It also increases the opportunities for those on the margin (less educated, disabled, and ex-offenders). 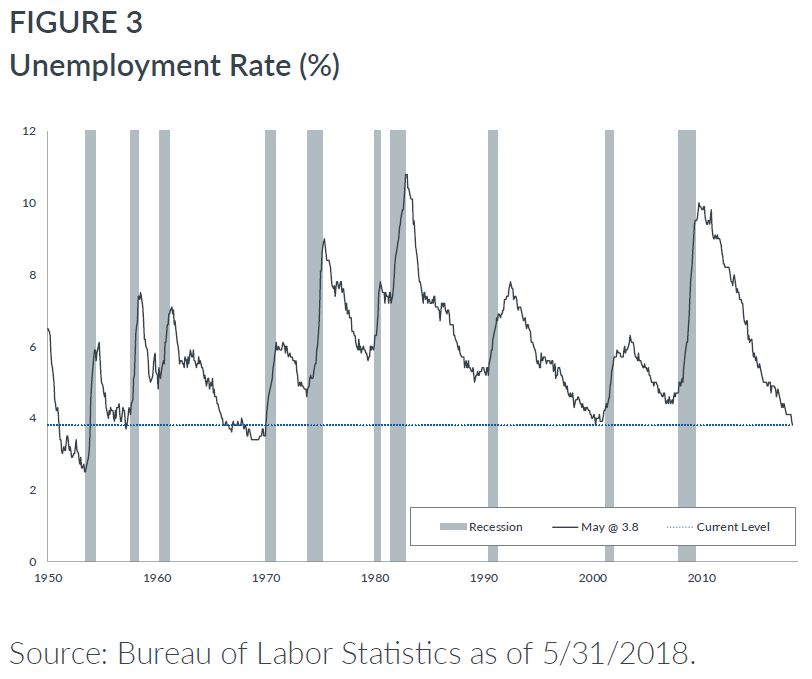 Following a rapid increase in inflation in Q1, during which the three-month annualized rate of growth peaked at 3.1% in February – the highest rate in about 12 years – core CPI has started to taper (Figure 4). It has been brought down primarily by vehicle prices, as demand has fallen following the post-hurricane surge of Q4 of last year. Despite these facts, the yearly change in core CPI continues on an upward trajectory as the low prices of last year in some sectors (e.g., mobile phone plans, some medical expenses) are rolling off the yearly calculations, lifting the overall rate.

Most members of the FOMC, the monetary policy arm of the Federal Reserve, expect inflation to surpass the Fed’s 2.0% target for a short period of time, driven by the increase in oil prices. Once they stabilize, some of the policy members believe inflation will settle back around 2.0%, while others believe it will fall back below the 2.0% level. The important issue here is that the Fed is not concerned with inflation getting out of control. 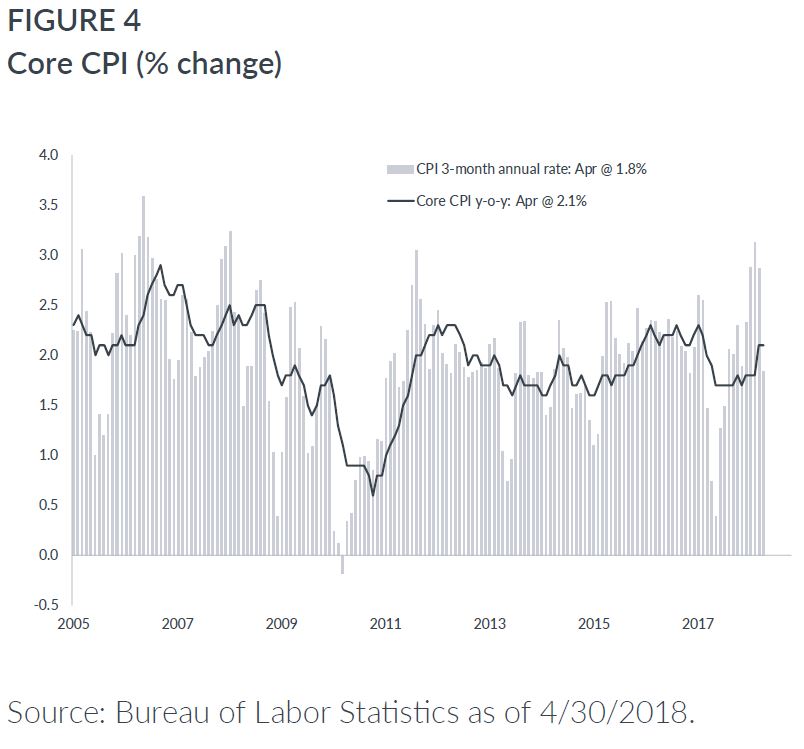 Households have ramped up their spending this spring following a winter of severe weather that kept many shoppers at home (Figure 5). Most important, higher gasoline prices don’t appear to be affecting consumer spending. This is welcoming news, especially since consumer spending rose only a tepid 1.1% in Q1, the smallest quarterly increase since June 2013.

This rebound plays a big role in economic forecasters' projections of Q2 GDP growth. Since consumption makes up more than two-thirds of GDP, the higher growth rate this quarter is expected to help propel Q2 GDP growth above 3.0%; it was just 2.2% in Q1.

The underlying economic fundamentals continue to point toward continued growth in consumption. Employment gains are continuing at a stronger pace than the previous two years, wages are gradually firming, inflation continues to remain modest, and confidence continues on its upward trajectory. 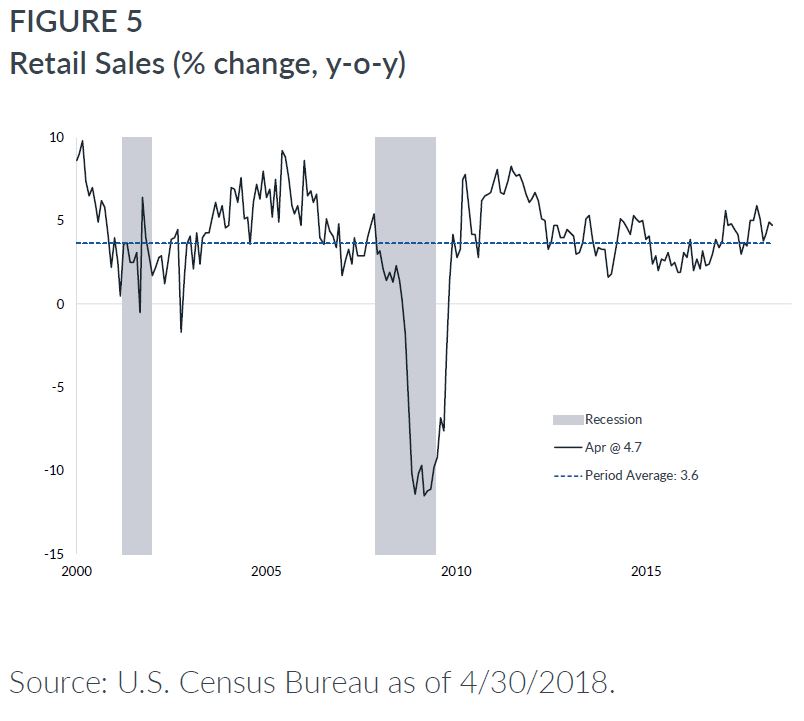 Overall, the Fed plans to continue with their gradualist approach to raising interest rates to bring them back to a “normal range”

The Fed is not concerned with inflation getting out of control

The unemployment rate fell in May to 3.8%, the lowest level since December 2000