The first half of 2018 found the market struggling for direction

Recently, the market appears to have regained some footing, but it’s too early to call the coast clear

The first half of 2018 found the market struggling for direction. January’s impressive start to the year capped off a remarkable 15 straight months of steady gains, reflecting an environment in which investor sentiment was perhaps too complacent. On the other hand, the sharp pullback in February and the sizable daily market swings that followed exposed a more pessimistic attitude among investors than was justified by the fundamentals.

Since then, the market has experienced a Battle Royale between countervailing forces, rallying on strong economic and corporate news only to pull back amid worries over trade tensions and higher interest rates. Sideways trading and volatility are common in this type of environment, and before regaining momentum, it will likely take investors a few more quarters to figure out where the pinch point in rates might be and whether the recent strength in earnings can be sustained.

Coming into the year, our outlook was optimistic but tempered. Strong earnings, full but fair valuations, and low recession risk made a pretty compelling argument to remain overweight equities. Still, we urged clients to brace themselves for greater volatility and harder-fought gains as markets begin to adjust to a more typical late-stage environment of higher inflation and interest rates. Not much in our outlook has changed since then.

pressures that have historically prompted an aggressive tightening by the Fed. Interest rates are rising, but inflation-targeting policy makers appear inclined to let the economy run a little hotter than necessary rather than risk tightening financial conditions too fast and ending the expansion prematurely. Meanwhile, trade tensions and geopolitical risk, though larger than we would like, appear limited for now in terms of their direct impact on overall economic growth or the bottom lines of most businesses.

Most encouragingly though from an investment perspective, has been the extraordinary jump we are seeing in corporate profits following December’s tax cut (see Figure 1). In fact, earnings continue to exceed already lofty expectations, and we are now estimating S&P 500 EPS growth of 15-18% in 2018. That’s up from our 13-15% estimate last quarter, and 12-14% entering the year. But this is not just a tax story. Stock buybacks are on the rise, and revenue growth has been bolstered by improved global demand. 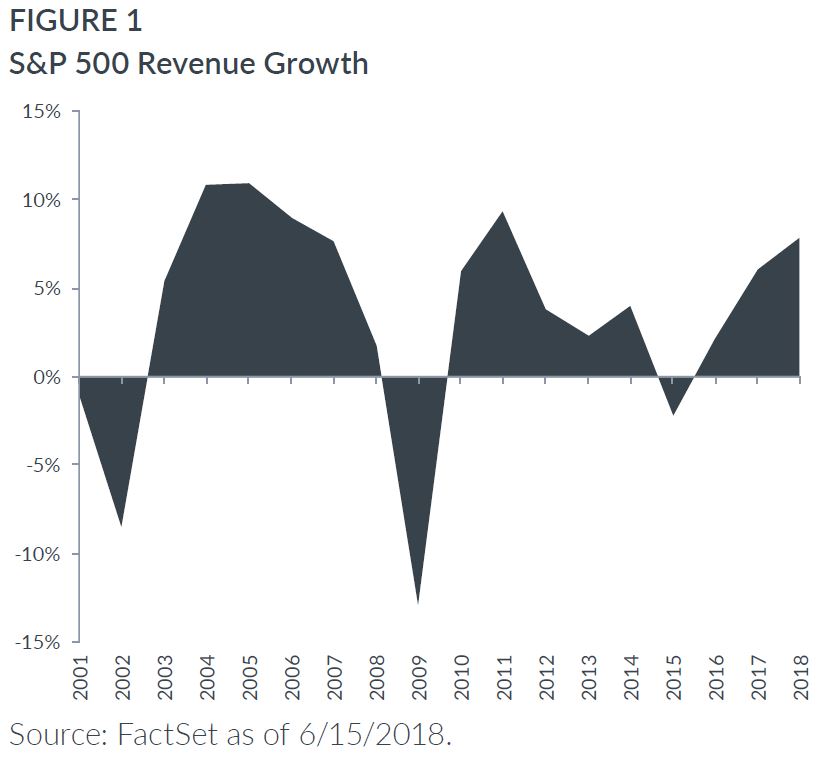 Indeed, most of the success behind this remarkable bull market can be explained by strong profitability and fundamentals rather than unwarranted investor enthusiasm. From the trough of the cycle, earnings growth has accounted for over 46% of S&P 500 returns and dividends another 21%, with just the remaining third due to multiple expansion.

There’s an old saying that bull markets are born on pessimism, grow on skepticism, mature on optimism, and die on euphoria. If true, this would certainly be an unusual equity market top. A look at overall fund flow data shows that despite a 32% increase in the S&P 500 since the end of 2015, investors haven’t exactly been piling unrestrained into equities—particularly compared with past stock-market peaks. According to Morningstar, cumulative flows into U.S. equity mutual funds and ETFs have grown a mere $34 billion over the past two and a half years, compared to a $707 billion increase for bonds (see Figure 2). 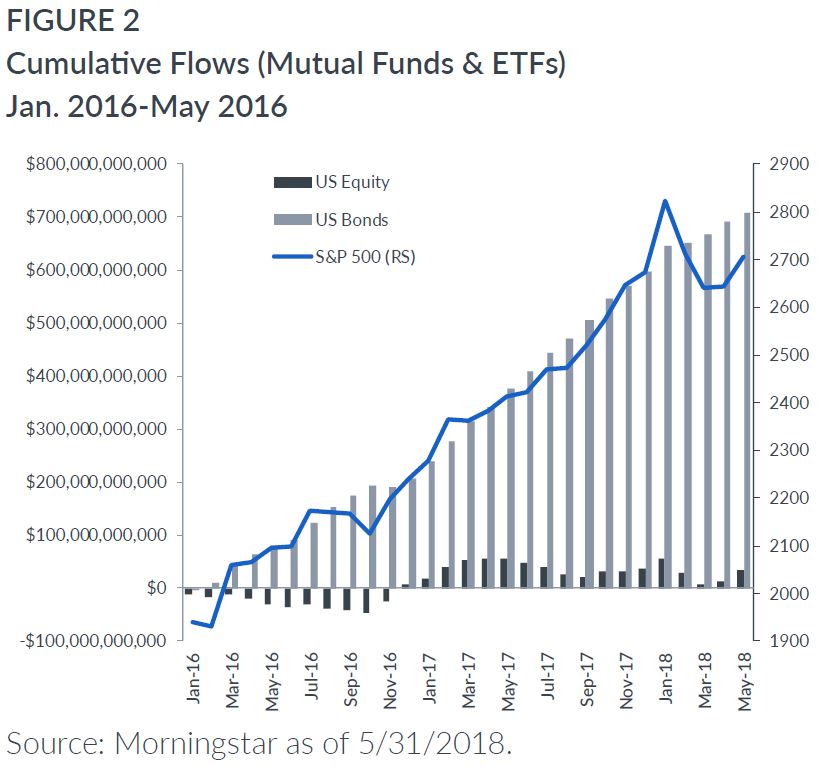 Putting all this into perspective gives us confidence that there is still a lot of momentum left in this business cycle. We recognize the risks yet see enough support from rising profits and reasonable valuations to stay invested in stocks—and note that interest rates and inflation are still moderate by historical standards.

Recently, the market appears to have regained some footing, but it’s too early to call the coast clear. The list of risks for investors to worry about is unlikely to grow smaller as we progress through the later stages of this business cycle, and we expect the Battle Royale over the market’s direction to continue in the months ahead as equities grind out advances amid periodic blows of volatility and potential pullbacks. Patience and discipline will be more important than ever. Still, history has shown that in the long run markets follow earnings, and in our minds this means that the path of least resistance for stock prices remains higher.

The first half of 2018 found the market struggling for direction

Recently, the market appears to have regained some footing, but it’s too early to call the coast clear