Bitcoin: What is all the excitement about?

Bitcoin is a cryptocurrency, a type of virtual currency that is like an online version of cash.

The price of Bitcoin is only as good as what the next person is willing to pay.

Bitcoin has emerged as a product that has quickly captured the excitement and enthusiasm of many investors. A few years ago, it was viewed as an obscure vehicle associated with nefarious individuals making payments for illicit activities, escaping government oversight. Now, Visa, Mastercard, and PayPal accept it for payment. Tesla will take it for payment for the purchase of one of their cars. Several corporations have purchased Bitcoin as an alternative to cash. Due to the increased popularity, there is a whole ecosystem that has been created centered around Bitcoin. There is a futures market for Bitcoin on the Chicago Mercantile Exchange so buyers and sellers can hedge their position, and there are ETFs. It appears that Bitcoin and cryptocurrencies are going mainstream.

The price rally in Bitcoin has attracted a great deal of attention. 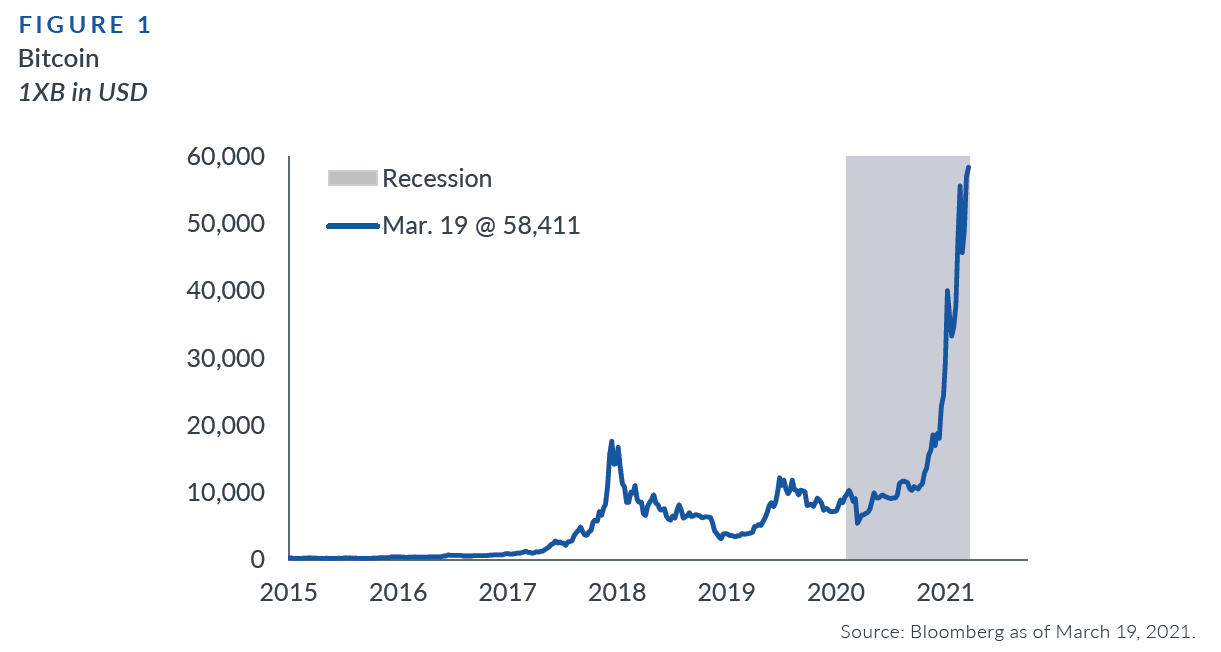 Bitcoin is a cryptocurrency, a type of virtual currency that is like an online version of cash. It uses digital files to keep track of all transactions, like a ledger. Bitcoin is stored in a digital wallet that allows users to receive or send Bitcoin (they, of course, are not FDIC insured). All of the transactions are recorded in a log, which is public. The person’s name is not there, only the wallet ID, keeping transactions confidential.

The transactions with Bitcoin are secure because digital files allow other people to confirm the transactions are real. There is decentralized control, so no government, central authority, or person can influence the ledger.

The investment world has had several iconic bubbles, but the rally in Bitcoin has been much stronger. What exactly is it? A currency? An asset? A commodity? A hedging vehicle?

Bitcoin is unlike any other investment vehicle that we have seen before. It doesn’t qualify for traditional standard asset classes. That is probably part of the excitement of wanting to own it.

Is it a currency?

It is not a very efficient substitute for a traditional cash or credit card transactions for a couple of reasons. The average Bitcoin transaction cost has fluctuated between $24 and $311, and during busier times, it gets more expensive. The average time for a transaction is about ten minutes, but that can vary widely depending on usage2. The energy consumption per transaction is significant. And then there are tax implications; the IRS has ruled that cryptocurrencies are treated as a capital asset (like a stock or bond), not like a currency. Each time it is used for a transaction, a capital gain or loss will be realized resulting in tax implications. And finally, there is also the inconsistent value of Bitcoin, which has brought on an iconic Bitcoin urban legend of someone paying for a pizza with Bitcoin. What was equivalent to $30 then has a market value today of over $1 million. Furthermore, transactions are not nearly as easy as using a credit card.

It is also a potentially valuable investment for those living in a handful of undeveloped countries. In many of these countries, there is a chance of bank closures, seizing of wealth, and high levels of corruption. Bitcoin offers an alternative, especially if there is severe currency devaluation.

Is it a new asset class?

It is not really an asset in the traditional sense since there is no intrinsic value. The price of Bitcoin is only as good as what the next person is willing to pay. That is far different from, say, a bond; bonds usually have two coupon payments each year plus the return on principal upon maturity; the bond price is equivalent to the present value of cash flows. The same thing is true about a share of stock; there is the dividend payment plus assumptions of future dividends. Even commodities have intrinsic value based upon the need.

Is it a new investment vehicle?

In the low-yield environment, many investors are in search of an alternative asset class. They are drawn to Bitcoin since it is the bellwether of cryptocurrencies. Some view it as an inflation hedge, much like other traditional currencies. Some speculative investors view it as a trading vehicle for momentum trades. This has been seen with the well-publicized news about the speculative trading of GameStop (GME).

Is it viable in the banking system?

That is the 64,000-dollar question. The two most essential concerns center around regulation and expense.

Banking is a highly regulated business. The government likes to follow the flow of large money transfers. Under current law, a bank transfer of $10,000 or more gets reported to the IRS. Bitcoin does not report any movement to any agency of the government.

The energy use/cost is high. One Bitcoin transaction is equivalent to over 700,000 Visa transactions (or 55,000 hours of watching YouTube).

But those concerns don’t stop banks from wanting to engage in some of the ancillary businesses. For example, the Bank of New York Mellon will start financing Bitcoin transactions.

The high level of speculation by investors is helping to drive the rally in Bitcoin. 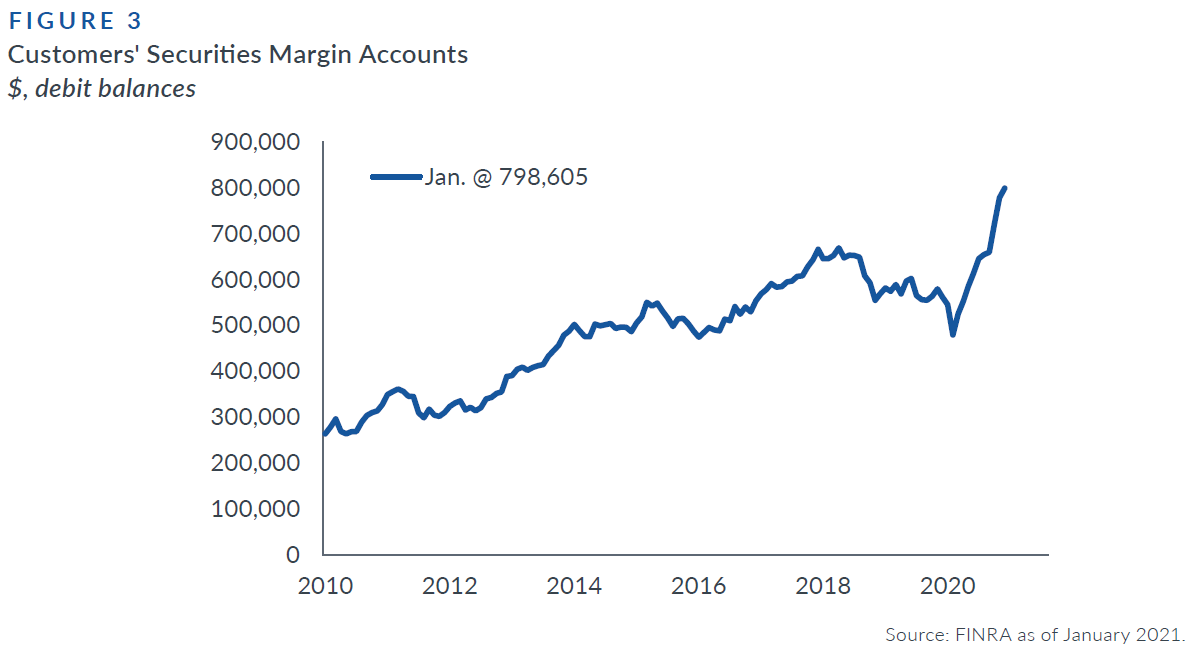 There are additional risks:

CNR does not believe it’s a viable investment vehicle or asset class as there is no intrinsic value and is subject to wild fluctuations and speculation.

Bitcoin is a cryptocurrency, a type of virtual currency that is like an online version of cash.

The price of Bitcoin is only as good as what the next person is willing to pay.

The Bangkok SET Index is a capitalization-weighted index of stocks traded on the Stock Exchange of Thailand.

The S&P Homebuilders Select Industry Indices are designed to measure the performance of narrow GICS® sub-industries. The index comprises stocks in the S&P Total Market Index that are classified in the GICS homebuilding sub-industry.

The NASDAQ Biotechnology Index contains securities of NASDAQ-listed companies classified according to the Industry Classification Benchmark as either Biotechnology or Pharmaceuticals which also meet other eligibility criteria.

As with any investment strategy, there is no guarantee that investment objectives will be met and investors may lose money. Alternative investments are speculative, may entail substantial risks, offer limited or no liquidity and may not be suitable for all investors.