The U.S. economy and the stock market should fare well under a politically divided federal government, particularly once the 2020 election outcome is settled.

Rochdale's investment leaders, anticipating that interest rates will remain low through 2021, continue to favor U.S. and emerging-market Asia equities for capital appreciation, and high-dividend stocks and high-yield bonds for income.

The U.S. economy and the stock market should fare well under a politically divided federal government, particularly once the 2020 election outcome is settled, City National Bank's investment leaders said Thursday.

The investment managers, relying on data from multiple sources, said they were working under the presumption that Democrat Joe Biden will become the next president in January, while the Republican and Democratic parties maintain control, respectively, of the Senate and House.

"Having split government is not such a bad thing. Gridlock can be good," Galvin said during the team's market update two days after the election and while the final results still hung in the balance.

Rochdale managers already had positioned client portfolios for a split-government outcome, and even a Donald Trump win would result in continued divided government, he noted.

"Divided government is good for the economy," added Paul Single, Rochdale managing director and senior portfolio manager, noting that U.S. elections have produced divided government 70 percent of the time over the past half century. He cited U.S. Federal Reserve data showing that GDP grew an average of 2.8 percent annually when Democrats and Republicans shared control.

"We think the outlook is quite good for the U.S. economy," Single said. 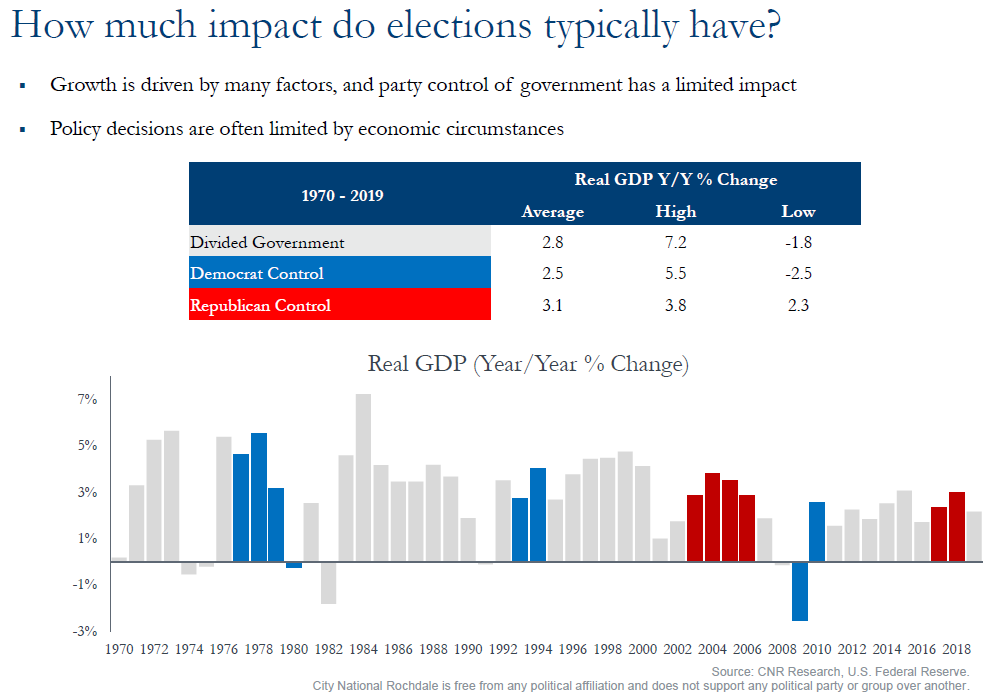 Similarly, the S&P 500 has produced its highest average annual returns — 10.4 percent — when Congress is divided, compared with returns when government is unified or Congress operates under one party and the White House under the other, Galvin said, citing FactSet data.

"The market got what it wanted in the split-Congress outlook," Galvin said.

Rochdale forecasts 30 percent S&P 500 earnings growth for 2021 under Biden as president and a Republican-controlled Senate, driven by GDP growth and strong margins and revenue. 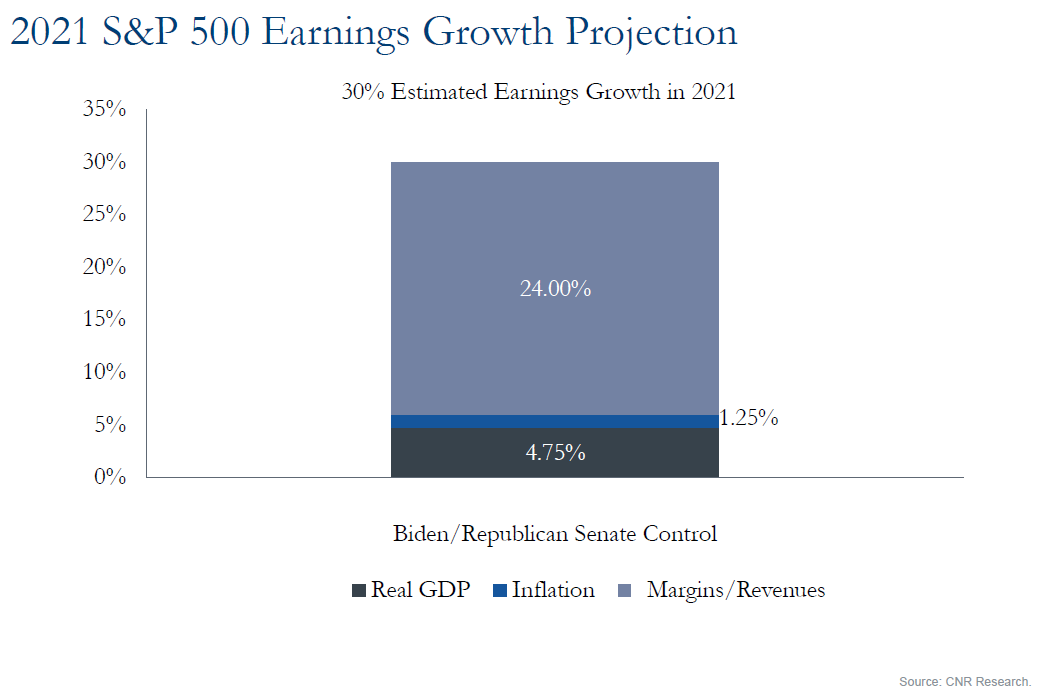 A Biden administration is viewed as likely to be more tactical in its policy decisions, and the stock market wouldn't be surprised by sudden tweets, Single said. At the same time, a Republican-led Senate can block programs that worry Wall Street, such as tax reform, costly health policies and tech industry regulation, he added. 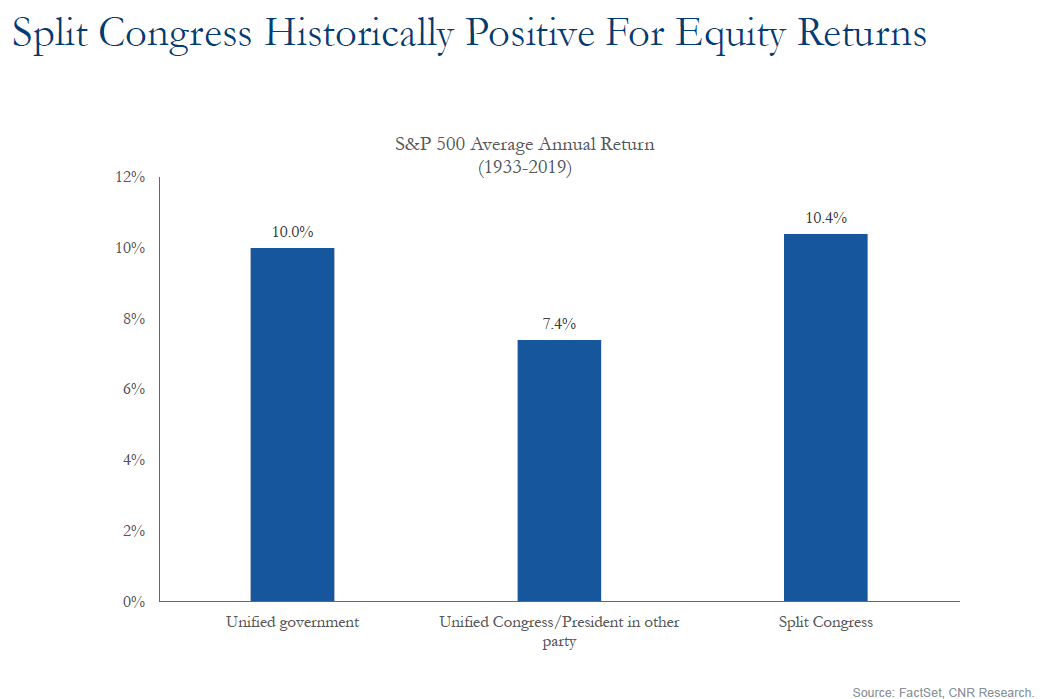 Rochdale's investment leaders, anticipating that interest rates will remain low through 2021, continue to favor U.S. and emerging-market Asia equities for capital appreciation, and high-dividend stocks and high-yield bonds for income. And they expect moderate returns across asset classes, Galvin said.

"We will be ready to go if we see opportunities," he said.

They expect lawmakers to approve a relatively modest pandemic-relief stimulus package soon, which should lift the economy and confidence, Galvin said.

The team hopes the stimulus package will benefit consumers, corporations and state and local governments, provide further unemployment benefits, support coronavirus testing and tracing, and address important issues such as evictions, loan forbearance and corporate liability, according to Galvin and Single.

Rochdale is maintaining its GDP forecasts, which include a 3.5 percent to 5.5 percent growth projection for 2021 following a 2020 economy rocked by the pandemic.

Regardless of which party controls the White House and Congress, the U.S. Federal Reserve continues to provide strong economic stimulus, preventing the economy from unraveling from the crisis, Galvin said.

That's why more stimulus from Congress is so important, Galvin added. 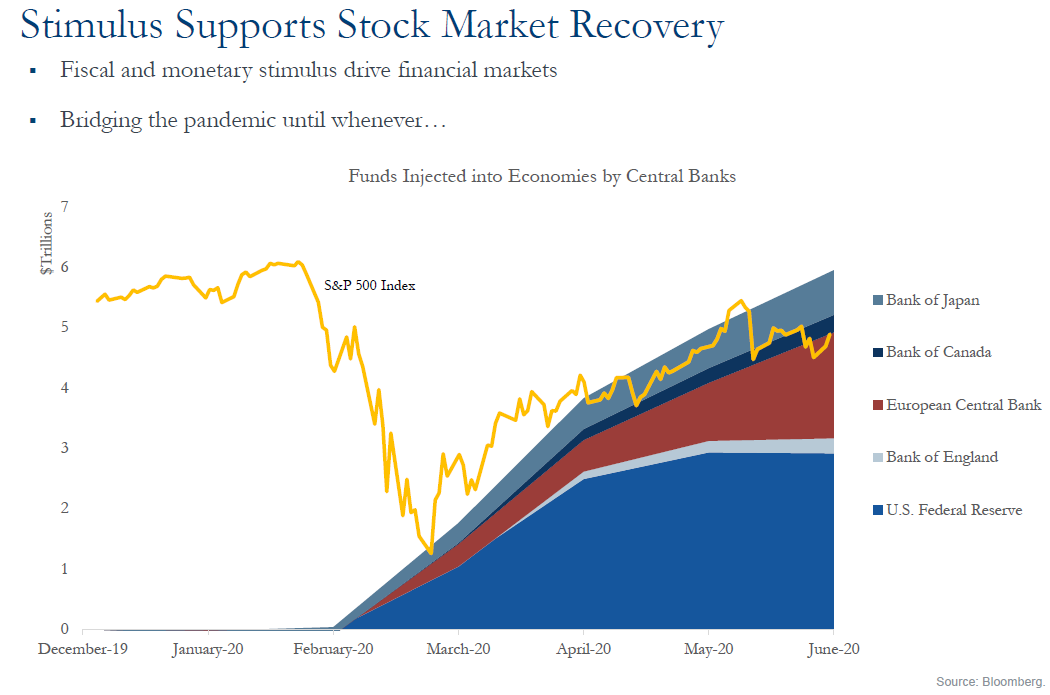 "The COVID crisis completely changed the dynamics of the elections this cycle," Galvin said, noting the new emphasis on early and mail-in ballots. These changed dynamics, combined with tight races, increase the odds of recounts and lawsuits on both sides of the aisle, he said.

Most election issues should be clarified by mid-December, when the Electoral College casts its votes, but the political environment likely will remain contentious in the meantime, he said.

The team is confident there will be a definitive outcome and an orderly transition, Galvin said. 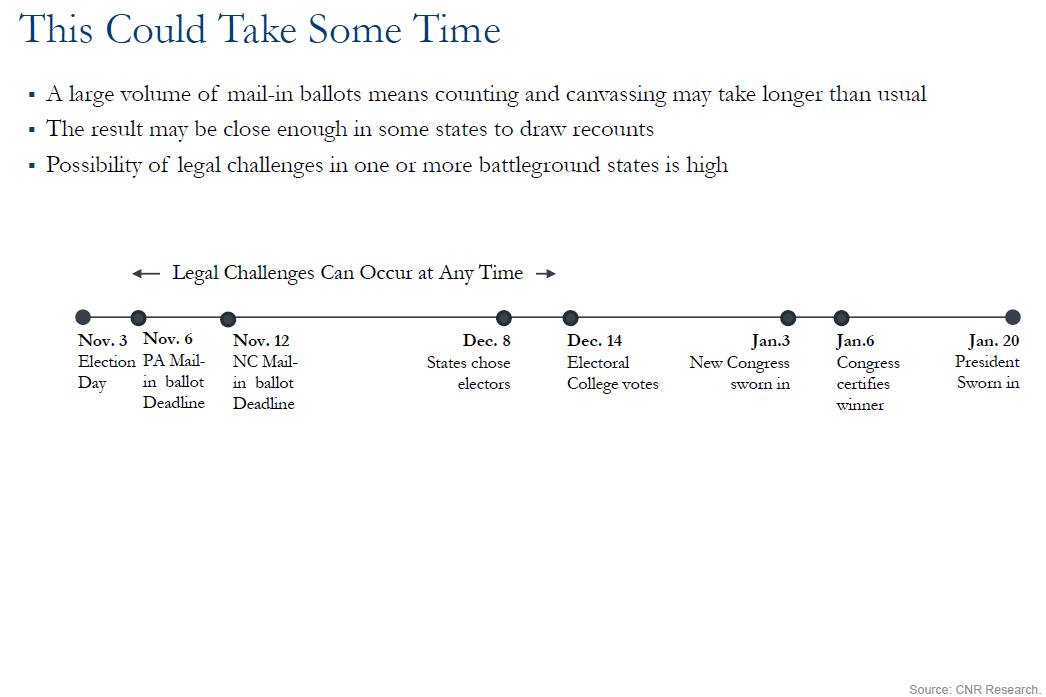 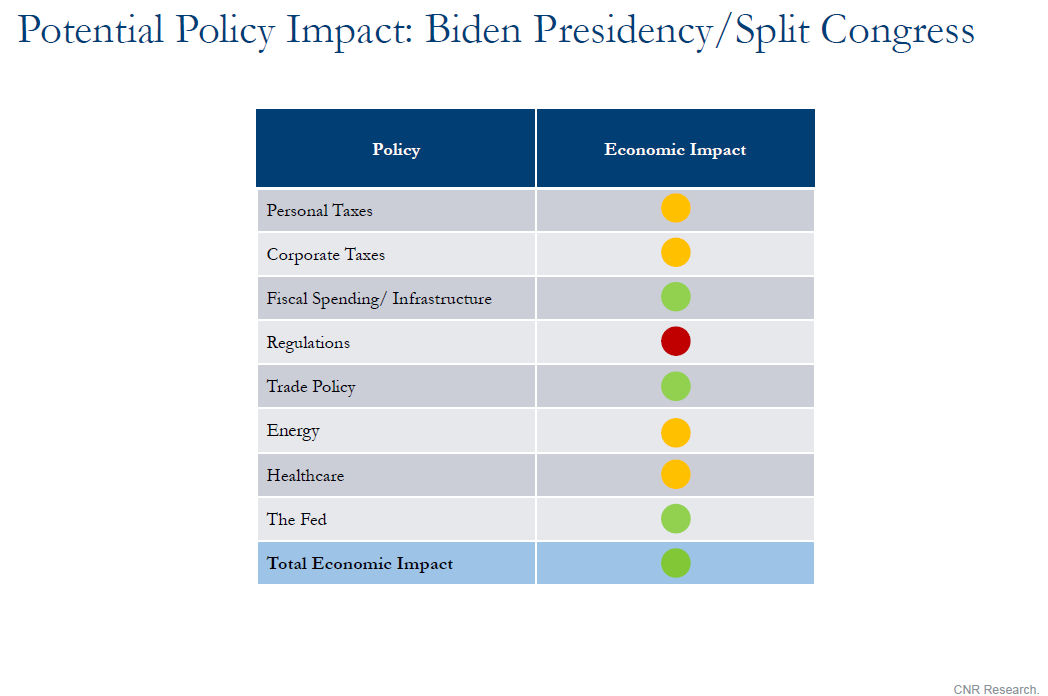 The tech sector should benefit from the divided government in several ways, Galvin said, noting that it would be difficult to achieve meaningful regulatory or tax changes affecting major players or to break up the tech giants, according to Galvin. He said a different trade approach to China also should help.

The healthcare, utilities and real estate sectors also should fare well, even with possible new health industry regulations, while the potential for increased regulation may hurt the financial and energy sectors, he said.

Rochdale remains underweight in banking and energy stocks. Housing, utilities and durable goods, such as cars and appliances, should be boosted by low interest rates, Galvin said. 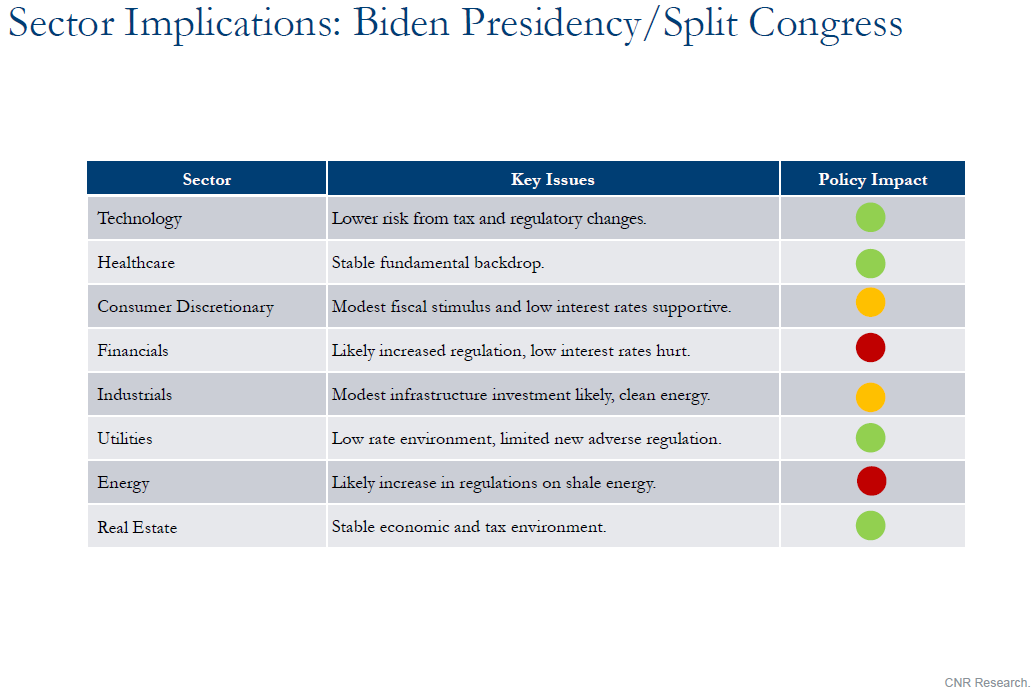 You are encouraged to keep up-to-date with the latest economic perspectives and shifting global markets during the pandemic by signing up for City National Bank's newsletters here. Delivered biweekly, straight to your inbox.

The U.S. economy and the stock market should fare well under a politically divided federal government, particularly once the 2020 election outcome is settled.

Rochdale's investment leaders, anticipating that interest rates will remain low through 2021, continue to favor U.S. and emerging-market Asia equities for capital appreciation, and high-dividend stocks and high-yield bonds for income.

The S&P 500 Growth Index is a market capitalization weighted index. All the stocks in the underlying parent index are allocated into value or growth. Stocks that do not have pure value or pure growth characteristics have their market caps distributed between the value & growth indices. Prior to 12/19/2005 this index represented the S&P 500/Barra Growth Index.

City National (and its clients or associated persons) may, at times, engage in transactions in a manner inconsistent with this article and, with respect to particular securities and financial instruments discussed, may buy from or sell to clients or others on a principal basis. Past performance is not necessarily an indication of future results. This article may not be reproduced, distributed or further published by any person without the written consent of City National. Please cite source when quoting.
You may also like...
Market Perspectives | Feb. 2021