Despite prospects for litigation, recounts related to the battle for the White House and runoff elections to finalize voting in the Senate, we believe the 2020 election is largely behind us. Our view is that when a new government is in place at the end of January, we will have a continuation of divided government consisting of a new Biden presidency, a Republican Senate and a Democrat-controlled House of Representatives. While it appears there will be some changes in governmental control, we continue to be optimistic regarding the outlook for the economy and financial markets, especially when considering very encouraging signs from recent vaccine development efforts. Our analysis is intended to be non-partisan and focused on potential implications for investors.

Major drivers of near-term growth: Over the long-term, history shows the economy can do well regardless of the particular political alignment of government. While policy changes can have an impact on growth, in the near term we expect the path of the economic recovery will continue to be driven largely by the combined effects of the COVID-19 pandemic and the level of monetary and fiscal policy response.

No major legislative initiatives in the first two years: Republican control of the Senate is expected to limit the ability of the Biden administration to implement a variety of policy changes proposed during the campaign, including higher taxes. Even if we are wrong on the Senate outcome, and Democrats win a narrow majority, they will likely be forced to contend with divisions within their own party on some of the biggest policy items, reducing the chances of any significant legislation without wide bipartisan support.

More fiscal stimulus still likely, but less so: One issue, though, where we do expect to see a degree of bipartisan cooperation is on additional fiscal spending relief related to the pandemic. Although the size of any such bill will likely be smaller (approximately $1 trillion) under a divided government, there are significant areas of agreement between both parties, including further aid to help consumers, state and local government, and corporations, as well as the need to address risks to the economic recovery in areas like corporate liability, evictions of consumers and small businesses, and loan forbearance.

Regulations, trade provide offsetting impacts: The Biden administration is expected to increase regulation, particularly in the financial services and energy industries, while also potentially taking action on various issues, such as antitrust and privacy, in the technology sectors. While this less friendly regulatory environment is likely a negative for growth, we also expect a Biden administration to pursue more multilateralism in trade policy, a positive for growth.

Net effect is positive: Though new policies will certainly have differing impacts across industries and sectors, overall we expect somewhat higher federal spending in areas like infrastructure under a Biden administration, as well as the continuation of current tax levels, to be supportive for the economic outlook. 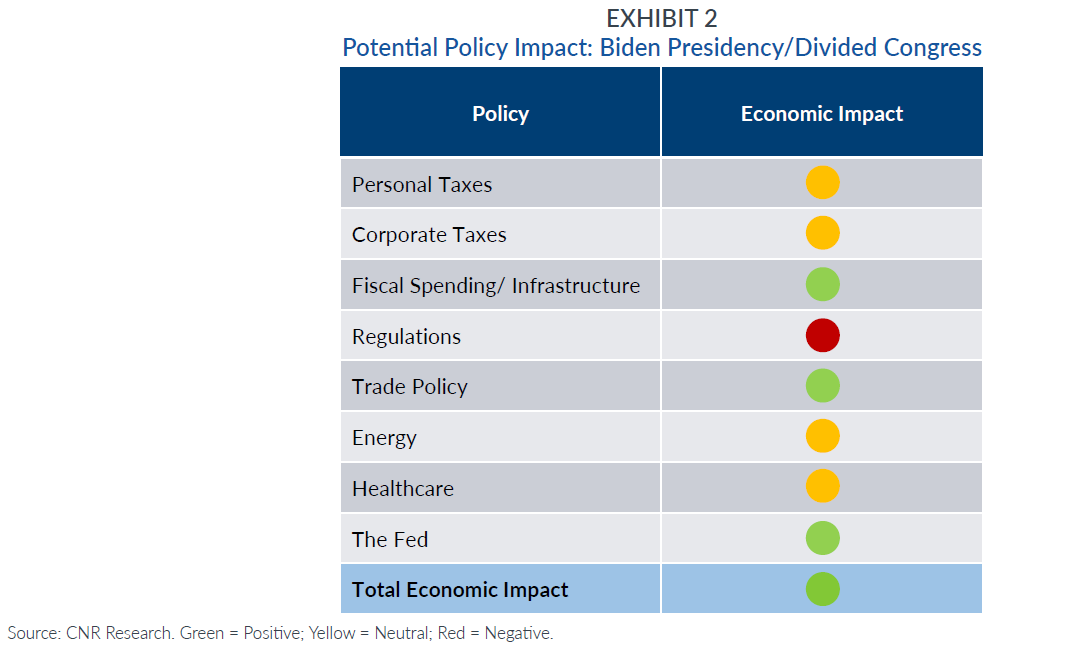 Markets and corporate earnings have done well under all combinations of political control, and we suspect that will continue. History shows that over time, market performance is driven principally by fundamentals, not elections. Trends in economic conditions, profit growth and interest rates have been the more powerful and lasting guide for investment values. Early indications are that investors have welcomed prospects of a divided Congress all but eliminating the likelihood of significant tax increases and sweeping regulatory reform. Importantly, regardless of the election results, we expect fiscal and monetary policy to remain exceptionally supportive, and the economic recovery from the pandemic, along with improving prospects for an effective vaccine, to be the main driving force for markets over the coming year. 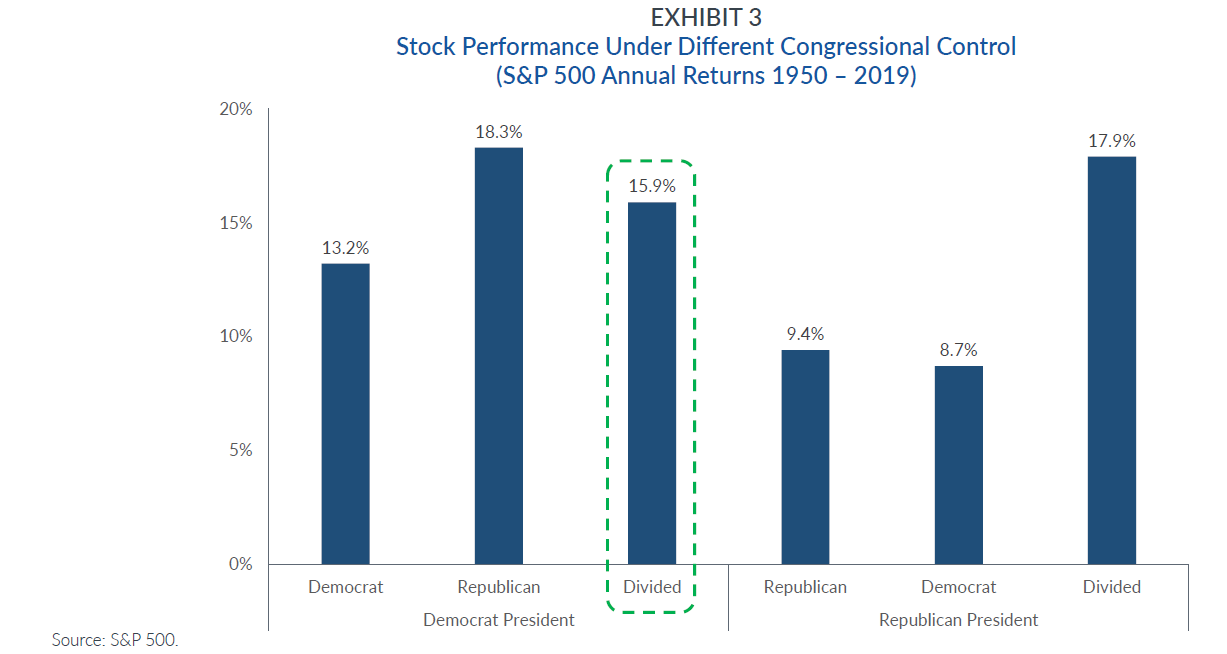 Moderate returns expected, regardless of election outcome: With relatively high equity valuations and moderating long-term economic growth, we continue to believe that investors should expect moderate returns going forward. History has shown that after an initial adjustment period in stock prices, the market does well regardless of the composition of U.S. government, as there are other critical differentiators that are impactful in corporate earnings growth and stock returns.

No major policy changes expected, limited impact: A divided Congress will greatly inhibit the ability of a Biden administration to accomplish many of its goals. As a result, we do not expect the continuation of divided government to produce significant policy shifts that would have a material impact on the equity markets relative to the current trajectory. The reduced likelihood of significant tax increases, for example, is expected to offset investor’s hope for higher federal spending under full Democrat control.

Modest sector-specific effects: One area where President Biden will be able to advance some parts of his agenda is executive action and regulation. Policy changes here would impact companies and industries differently, and there are likely to be both positive and negative effects. For certain industries, such as those affected by trade, executive actions could provide opportunities for growth. Conversely, greater regulation could pose as headwinds for sectors like Financials and Energy. Increased rigorous analysis of each company’s business model will be required to fully assess the net impact of policy change, highlighting the importance of active management for investors.

Continued low interest rates: Monetary policy is expected to keep short-term interest rates low for years to come, while relatively smaller increases to fiscal spending will likely have a moderating impact on inflation and growth expectations, keeping long-term interest rates relatively low as well. Prospects of relatively smaller fiscal spending will also keep the Federal Reserve active with its balance sheet and its support for financial market stability. We expect the shock from COVID-19 to create a high hurdle for monetary policy to downshift from its heavily supportive position.

Less support for the municipal bond market: While we continue to recommend tax-exempt bonds for clients in need of higher income, the likely inability of a Biden administration to increase taxes does reduce their relative attractiveness somewhat. A Republican Senate is also less likely to approve a high level of federal support for state and local governments, which is negative for municipal credit.

Environment favors opportunistic fixed income: Continued economic growth is positive for the outlook of corporate credit broadly. Given the high probability of an additional fiscal package amid very low interest rates, the search for yield will continue to provide foundational support for opportunistic fixed income segments, especially in the U.S.

S&P 500 Index (S&P500) is a stock market index that tracks the 500 most widely held stocks on the New York Stock Exchange or NASDAQ. It seeks to represent the entire stock market by reflecting the risk and return of all large-cap companies.

CNR is free from any political affiliation and does not support any political party or group over another.
You may also like...
Market Perspectives | Feb. 2021