No Trade War, but No Trade Peace Either

Risk of a full-blown trade war with China remains low, but has risen

Proposed actions by Trump administration likely a negotiating tactic, and there remains plenty of time for de-escalation

Economic impact minimal at this point, but should negotiations fail, the impact to the economy and financial markets could be material

In the meantime, uncertainty driven by headlines will likely weigh on investors, and markets could be subject to periodic bouts of volatility

Economists are famous for disagreeing with one another, but if there’s one area of shared wisdom among them, it’s that there are no winners in a trade war. The last trade war among major countries occurred nearly a century ago, during the early stages of the Great Depression when countries sought to protect their own industries and workers from the economic downturn. Instead, the opposite happened. Sales plunged, countless companies went bankrupt, and millions of workers lost their jobs. The situation is dramatically different today, with the global economy more interconnected than ever before and nearly every country a beneficiary in one form or another.

In this respect, rattled investors can be forgiven if recent headlines have felt a little like the beginning chapters of a scary economics history book. But there is nothing inevitable about a trade war. Trade disagreements between nations take place all the time, and tariff actions, though rarer, have been used often in the past without setting off a major economic dislocation. Still, the shift underway in U.S. trade policy is symbolically important and raises the real risk of much more to come, with broad negative consequences for economic growth and corporate profits.

The administration’s recent actions on trade should not come as a complete surprise. Since the campaign, the president has been quite vocal about his displeasure with the size of the U.S. trade deficit, of which China, at $375.2 billion in 2017, is the biggest culprit. And while still well below the peak of 5.7% of GDP reached in late 2005, the fact that a surge in Chinese imports has recently driven the trade deficit to a 9-year high has only served to embolden his protectionist inclination.

There is no question that U.S. tariffs are low in comparison to other countries—aided by past administrations that accepted this discount in order to promote global stability. However, any country’s trade balance is a function of many factors, including the value of its currency, amount of government spending, and strength of the economy. The U.S., for example, has a very low savings rate relative to most countries, especially our primary trading partners. This will inevitably lead to a flow of goods in our direction.

Moreover, the U.S.’s relationship with its trade balance is relatively unique because of its position in the global economy. The U.S. dollar is the world’s reserve currency, and the U.S. capital markets draw more foreign investors than any other nation. Indeed, trade deficits by themselves are not necessarily bad when they reflect the relative attractiveness of a nation for investment, and there is no simple, straightforward link between a large trade deficit and a lower level of economic activity. Over the past three decades, larger trade deficits have occurred when the economy has been growing more rapidly, and smaller trade deficits when the economy was performing poorly (see Figure 1). 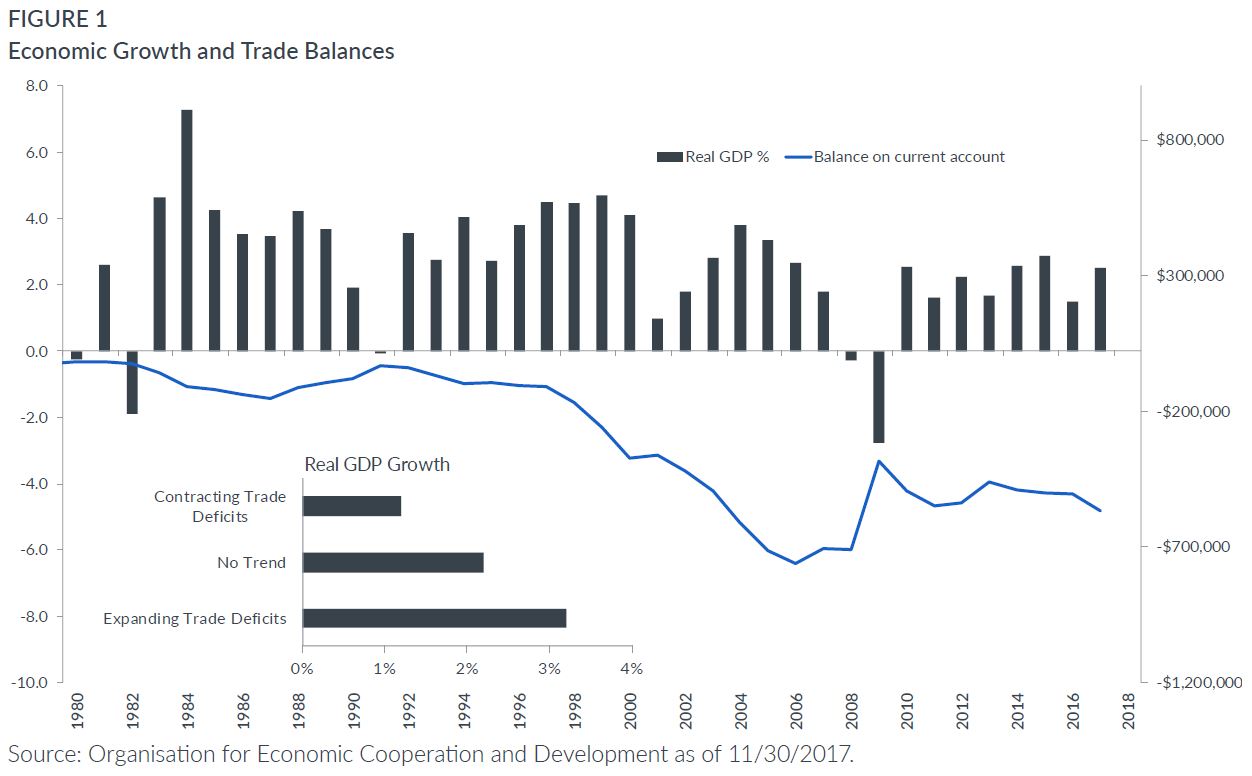 Of course, when cheaper imports compete with domestically produced goods, domestic jobs may be lost to those abroad. The goal of U.S. trade policy should be to level the playing field so domestic producers can compete fairly in global markets. Few would dispute that trade problems with China in general have been building for many years. Beijing subsidizes production, blocks imports, and floods the global economy with a glut of products at below cost while violating the intellectual property rights of U.S. firms that do operate in China.

Still, the preference is for advancement on these issues to be made at the negotiating table. Tariffs are essentially taxes collected at the border, paid by American consumers for the benefit of a few select industries. And as foreign governments target U.S. exporters for retaliation, the costs to the broader economy are only compounded. Lost market share abroad means smaller revenues for U.S. companies at home and less incentive to invest, expand, and hire.

For instance, the administration’s decision to place tariffs on steel and aluminum will likely come at a not insignificant price for the overall U.S. economy in terms of higher costs and lost jobs while doing little to turn around the trade deficit or help the industries the president seeks to protect. According to the Bureau of Economic Analysis, the steel and aluminum industry employs about 300,000 workers and accounts for just 0.3% percent of GDP, whereas industries that consume steel as an input to their production account for 5.8% of GDP and employ 6.5 million people. 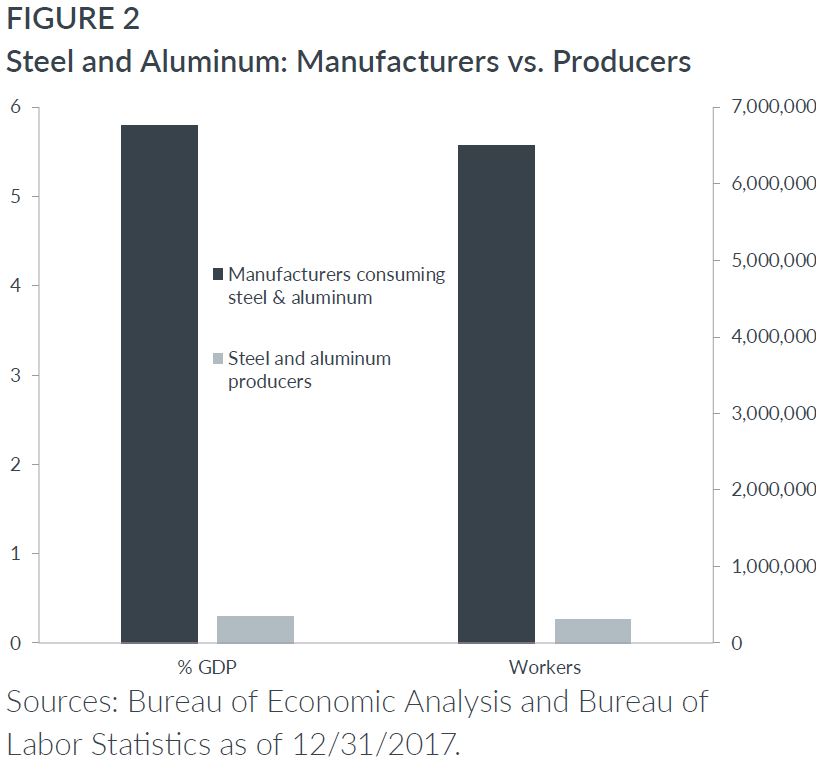 One only has to look back as far as the Bush administration’s 2002 steel tariffs to see the risk of unintended outcomes from trying to protect domestic industries from global competition. Although U.S. steel output did initially rise after the tariffs went into effect, production soon contracted again, and employment continued to trend lower. Facing retaliation from the EU and others, the tariffs were removed within 18 months, but not without a cost. Prices for steel rose 3%, steel-consuming firms experienced a 30% rise in production delays, and subsequent studies found that for every one steel-producing job saved as a result of the tariffs, somewhere between 30 and 50 jobs in other manufacturing sectors were lost.

China’s reply to recent trade actions has been swift, dramatic, and predictable. Fortunately, the economic impact so far has been minimal, but as each side digs in, the tit-for-tat responses between both countries contain the real risk of spiraling out of control. Already, the president has proposed an additional $100bn of tariffs in reaction to Beijing’s latest threatened retaliation. That would take the running total of potential tariffs to $150bn, equivalent to 28% of total U.S. imports from China. A similar-sized reprisal by Beijing would cover more than three quarters of U.S. exports to China. If they ever see the light of day, tariffs of that magnitude would affect the equivalent of roughly 1.7% of U.S. GDP, and may actually start to have a noticeable impact on the economy.

The good news is that not much yet has been set in stone and there is plenty of time. U.S. companies have until May 22 to weigh in on the most recent proposed list of tariffs, and while there is broad consensus among U.S. business that China should be reprimanded for unfair trade practices, there is little enthusiasm for the path chosen to address the problem. As a result, the administration will likely receive considerable pushback before a period of reflection of at least another 180 days starts, in which the U.S. government must decide whether it ultimately wants to move forward. China, in the meantime, will likely adopt a wait-and-see approach before formally implementing its own tariffs in response.

Our belief is that the president’s actions are most likely being used as a negotiating approach. We have learned that Trump’s opening gambit isn’t necessarily the final word to the story, and investors should refrain from overreacting to any single announcement. The administration has already carved out temporary exemptions on the steel and aluminum tariffs for Canada, Mexico, the EU, and other countries. Moreover, the apparent desire and willingness of Chinese authorities and the U.S. administration to continue with dialogue are positive signs that more dire escalation can be averted. If, in the end, recent actions lead to progress on Chinese trade violations, the advancement of NAFTA negotiations, and better dialogue with other nations, the strategy might yet prove to be a success.

So, do developments over the past month mark the opening shots in a trade war, or are they merely saber rattling? It seems likely that the president is only putting trade partners on notice in an effort to pursue further grievances at the bargaining table. But if more severe and provocative protectionism is forthcoming, it would be a serious concern for global economic performance and financial markets. The outlook for the global economy and corporate profits in 2018 remains strong, but the head-spinning moves in equities over the past month are a reminder that no one knows for certain how the administration’s trade agenda will play out. The challenge for investors is that while much of the optimism is already priced in, elevated uncertainty could eventually weigh on the many positive forces in play.

Still, we believe the risks of a full-blown trade war with China, though higher than we’d like, appear quite low for now. Concerns over policy missteps may grow the longer negotiations draw out, and investors should be watchful as trade issues develop in the coming months. Nevertheless, a trade war is in neither party’s interest. No two economies enjoy quite as complex financial ties as do China and the United States; a relationship that despite its flaws, has produced many benefits for both sides. This, we think more than anything, is good reason to believe calmer heads will ultimately prevail. 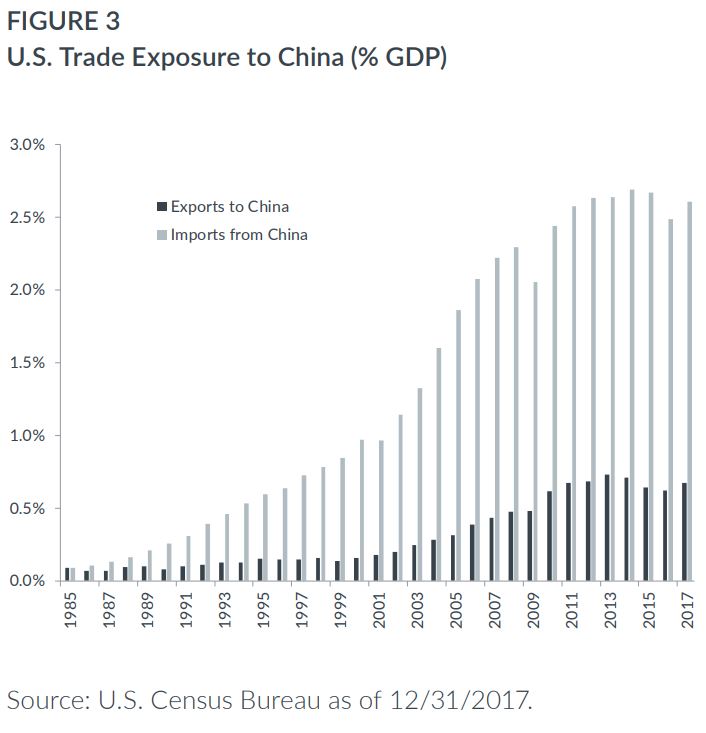 Risk of a full-blown trade war with China remains low, but has risen

Proposed actions by Trump administration likely a negotiating tactic, and there remains plenty of time for de-escalation

Economic impact minimal at this point, but should negotiations fail, the impact to the economy and financial markets could be material

In the meantime, uncertainty driven by headlines will likely weigh on investors, and markets could be subject to periodic bouts of volatility

Investment management services provided by City National Bank through its wholly owned subsidiary City National Rochdale, LLC, a registered investment advisor.
You may also like...
On the Radar | Apr. 12, 2021