With excess supply and limited storage options, the prices of oil are being influenced broadly.

The collapse in oil prices relates to the fear that storage facilities across the world may be approaching capacity.

With the massive oversupply in the market currently and demand being down significantly, WTI crude is expected to remain under pressure at least until May. By that time, one needs to see significant production reduction.

What happened to oil price in the last few days?

Global oil demand, which had already been in decline, has experienced a rapid imbalance between excess supply and demand. With the sudden shutdown of the global economy due to COVID-19, global oil demand has fallen to around 75MM barrels per day. The inability of Saudi Arabia and Russia to align on a coordinated production cut in early March, exasperated this imbalance. While recently a 9.7MM barrels-per-day cut has been decided upon by the OPEC, it still leaves a significant surplus with the existing daily supply (that has gone down slowly) and demand (that has gone down drastically and is slow to gradually move back up). 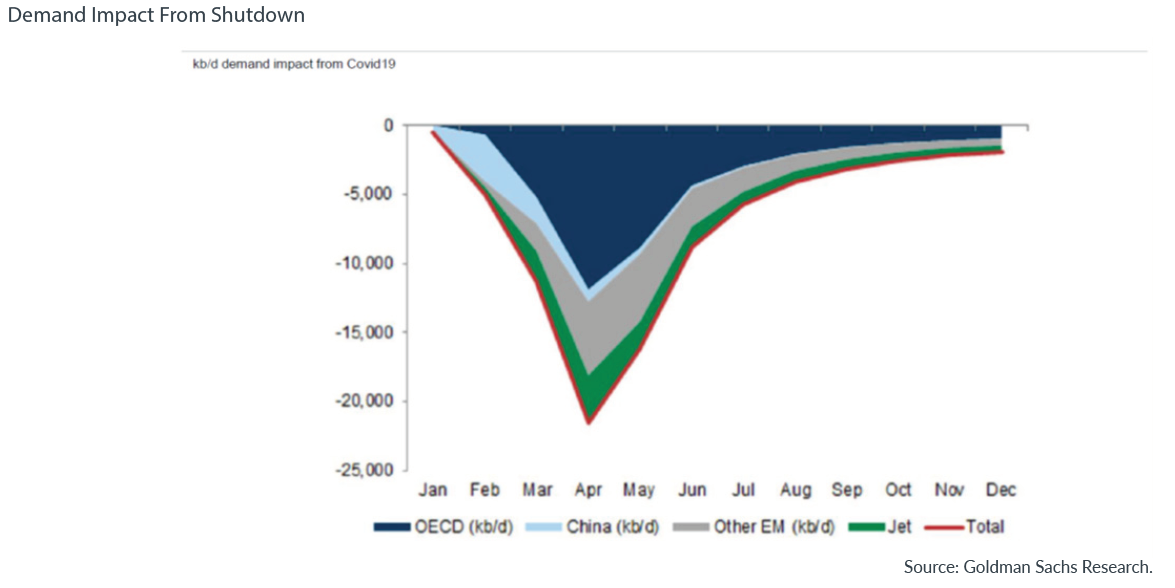 With excess supply and limited storage options, the prices of oil are being influenced broadly. For example, Brent crude oil that is priced along coastal areas and is easier to move to various global demand centers, has not experienced dramatic price moves. On the other hand, landlocked crude, such as WTI priced in Cushing, Oklahoma, or Canadian sands crude, has been trading at significant discounts compared with Brent over the last several days, as the cost of transporting these crudes to the coast is an additional burden at a time when coasts are already oversupplied. At the same time, U.S. oil production is down only slightly from its peak a few weeks ago, exacerbating the growing inventories inland. 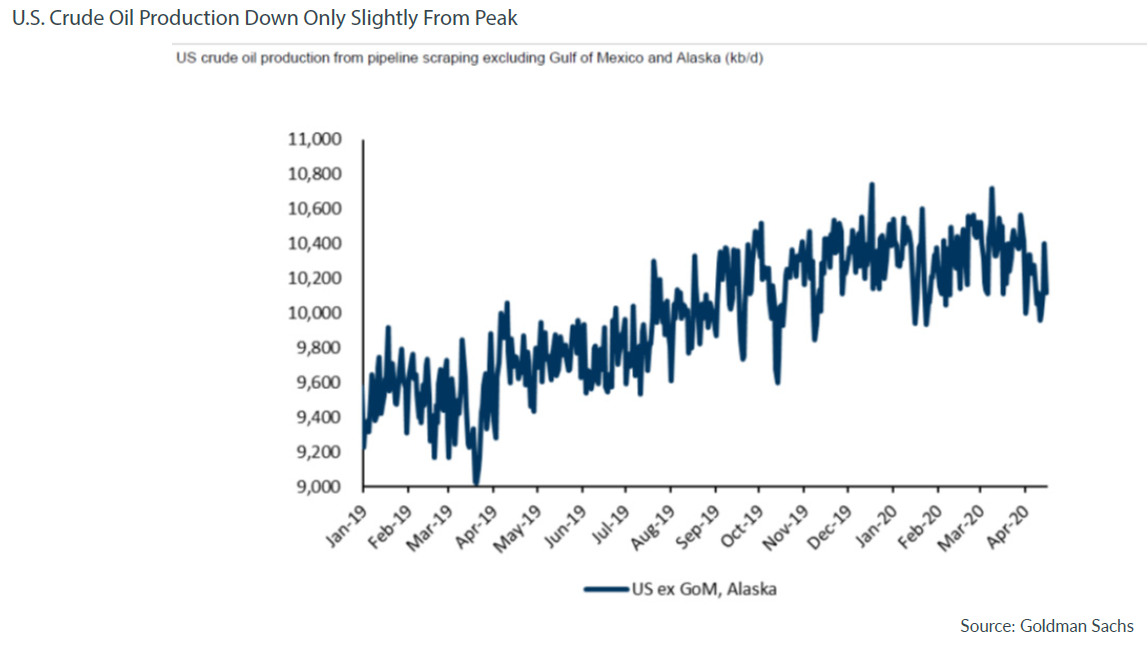 More recently, the collapse in oil prices relates to the fear that storage facilities across the world may be approaching capacity. Even with the announced production cuts, storage is expected to continue to fill until May 2020. At that time, global oil inventories will be around 90 days of production vs. approximately 45 days of production in 2019. 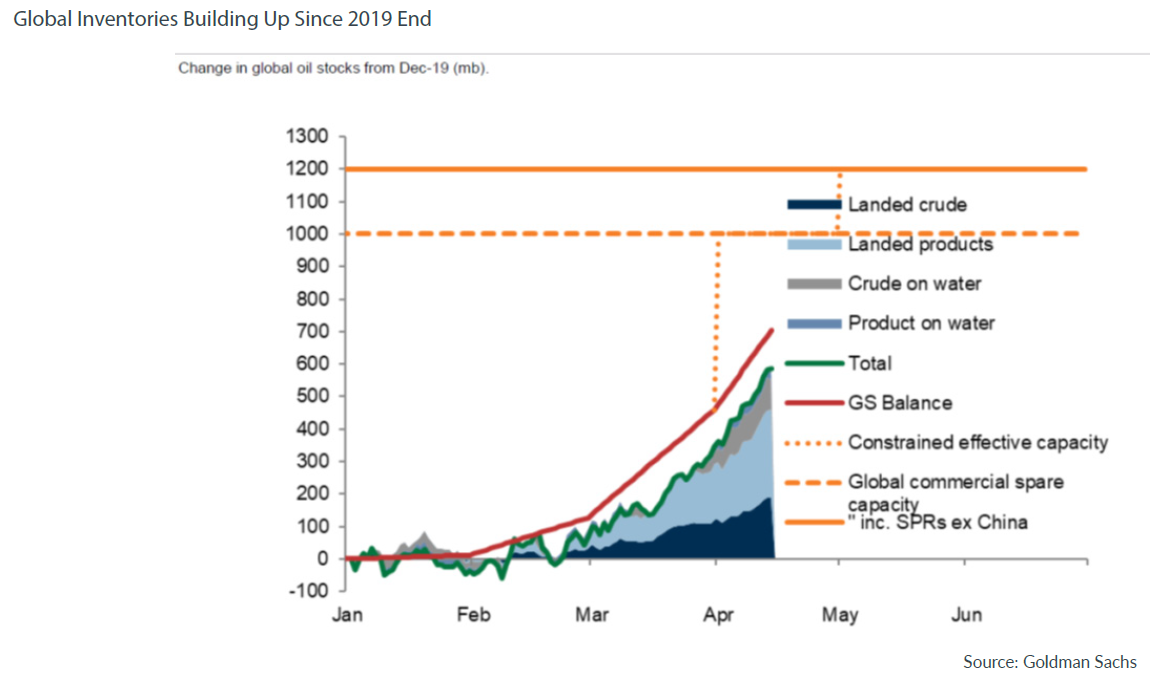 What happened to the oil price contract on April 20?

Across most financial websites, the WTI price is shown at a point in time for the next month’s expiring futures contract. In other words, if one looks up the WTI price between March 22 and April 21, the WTI price shown on various websites will be of the April 21 expiring financial/futures contract traded on exchanges that calls for May delivery of crude. If one is long on this WTI futures contract at the end of April 21 (expiration date), then one has to take delivery of physical oil at Cushing, Oklahoma sometime in the next month (May in this example). So on April 20, the May WTI contract closed at -$38 per barrel, or down $55 per barrel versus the previous day. This contract was expiring on April 21 — so the negative $38 per barrel implies that producers (or investors/speculators long on the contract) were not willing to take the crude but willing to pay someone to take it away sometime in May (when there is fear that storage in Cushing or inland in the U.S. could actually run out). By early April, Cushing storage was over 75% full, and estimates are that by early May, it might be 100% full. This phenomenon of negative crude has already been happening for the last few days in some landlocked places in Canada and Texas — it only affected the financial futures market April 20. Currently, the June WTI contract is over $20 per barrel, but once the May WTI contract expires on April 21, oversupplied markets may start to push pressure on the June WTI contract too. All this implies that in the near term, production in the U.S. needs to fall much more sharply, as producers won’t have a place to ship or store crude come May.

What is the outlook for crude in the next few months/years?

With the massive oversupply in the market currently and demand being down significantly, WTI crude is expected to remain under pressure at least until May. By that time, one needs to see significant production reduction. As such, the June WTI contract could also be pressured in the near term. Once the demand supply is in balance (this could happen sometime in May or June), then WTI might start to stabilize but still trade well below $25-$30 per barrel or so.

Many strategists on the street now forecast WTI to be between $30 and $40 per barrel for the next few years.

Why should investors stay away from ETF’s like USO to gain oil exposure?

USO is not a good way to gain exposure to oil prices, especially if oil price futures are in contango (or in other words, future oil prices are higher than spot prices, or the futures curve has an upward slope). USO is a product that tracks the most relevant oil futures contract to replicate near-term/spot oil prices — i.e., USO tracks next month’s futures oil price contract (until the contract is within two weeks of expiration). When expiration is near, USO sells all of the nearer-dated contracts and then buys the same quantity of next month’s contracts. When oil prices are in contango, USO is selling this month’s contracts at lower prices and rolling over to buy next month’s contracts at higher prices. This is anti-classical to sell the current at a lower price and buy the next at a higher price. So during contango, USO continues to generate losses by this strategy. On top of that, there is an expense ratio of over 0.80%.

There is a reasonable argument that the April 20 price drop in May WTI futures might have been caused by USO rolling over its contracts, as it is not set up to take physical delivery of crude. Additionally, USO has more than 25% of the June WTI contracts, making it a big player in the oil futures market.]

Bottom line, when futures oil prices are in contango (like they are currently), or in other words, when the futures price curve of oil is upward sloping (like in the figure above), we believe one should definitely stay away from USO.

What is the impact on energy equities from the recent oil move?

Over the last 10 years or so, while U.S. production has more than doubled, the ROCE (or return on capital employed) of major Exploration & Production Companies (E&P) and Vertically Integrated Companies (Integrateds) combined is in the low single digits, or in other words, the sector has destroyed significant value in this time — this was at a time when oil averaged significantly above $50 during the first half of the decade. There have been numerous cases of bankruptcies, repackaging, coming back to the publicly listed equity markets and bankruptcies again.

In U.S. shales, on average, a well-run energy company could generate 10% ROCE at $55 per barrel of oil. Full-cycle development costs (including land acquisition, exploration, etc.) are around $40-$50 per barrel to break even. At $30 per barrel or below, none of the U.S. oil companies make money — it doesn’t even cover cash costs in many instances. Given the current price levels, the sector faces significant stress.

With this recent dip in oil prices much below $30 per barrel, U.S. activity needs to drop much more precipitously in the near term. To date, U.S. rigs are down approximately 25% from the top, and U.S. production is roughly down high single digits from the top. In the next few days, as concerns about storage being at maximum capacity in May come to the forefront, one can expect rapid shut-ins of wells and significant rig reductions.

Most E&Ps and Integrateds have announced capital expenditure plan reductions of 20%-30% for 2020, but that could be even higher for the U.S. shales players in the near term.

The majority of the balance sheets in energy are stretched. Banks will continue to tighten standards over the next several months. Many companies face near- and medium-term liquidity concerns too. The majority of company dividend yields are either in high single digits or double digits. In what may be a sign of what’s to come, SLB announced a 75% cut to dividends.

With excess supply and limited storage options, the prices of oil are being influenced broadly.

The collapse in oil prices relates to the fear that storage facilities across the world may be approaching capacity.

With the massive oversupply in the market currently and demand being down significantly, WTI crude is expected to remain under pressure at least until May. By that time, one needs to see significant production reduction.

The mention of a specific security is for informational purposes only and not a recommendation to buy, or solicitation to sell such security. One or more of the securities mentioned in this piece may be owned by the separately managed accounts advised by CNR.