Half Full or Half Empty?

We will continue to follow our late-cycle playbook of gradual risk reduction as valuations and risks of recession move higher.

As anticipated, the Federal Reserve Bank voted to cut interest rates by 0.25% to the median level of 1.875%.

There was some robust data in the labor report: stronger wage growth, rising labor force participation and a rebound in average workweek.

Inflation momentum has been growing across a broad set of subcomponents.

Much of the extreme gloom of August has evaporated, and the market is once again seeing a “half-full” world. The saw-tooth pattern we’ve seen this year is typical of a late-cycle environment where uncertainty surrounding policy and mixed messages about the expansion’s sustainability cause market sentiment to swing strongly between pessimism and optimism.

As we have always counseled, it’s best not to react to specific data points or headlines. Instead, we recommend developing an investment strategy based on how one expects the economy and market to play out over the next 6-18 months, adjusting course only if the preponderance of the data indicates that it is necessary. While volatility is inevitable, the market should ultimately reconnect to the broader positive fundamentals over time.

Indeed, recent developments have had a more supportive tone to them, helping to return the S&P 500 to within 1% of all-time highs set in late July. Economic data, including the latest readings on jobs and consumer spending, have reduced fears of a looming recession. At the same time, trade tensions have come off a boil. Interest rates have also rebounded, calming concerns that the inverted yield curve was signaling imminent economic distress.

Still, the root causes of recent market concerns and volatility remain. So far, the U.S. economy has held up well in the face of global headwinds. Growth has slowed, but domestic demand continues to have strong foundational support, given low levels of unemployment, solid income gains and healthy overall household and corporate balance sheets. 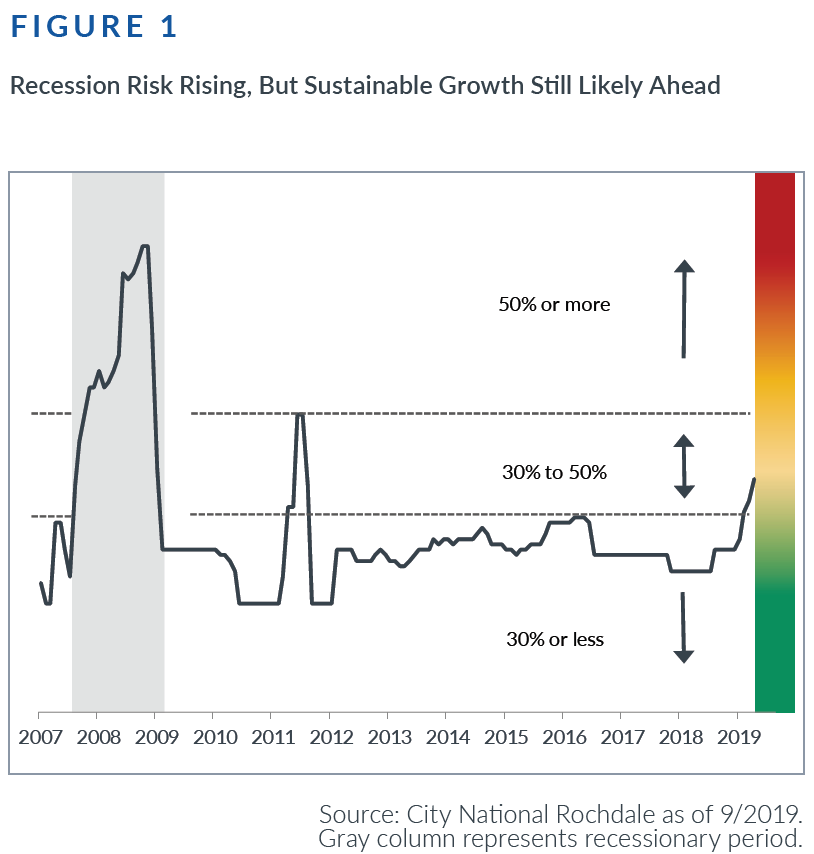 However, the long-running economic expansion and equity bull market are not bulletproof. An aging business cycle is more vulnerable to policy missteps and other shocks. While the economy has shown great resilience to challenges from overseas, recent deterioration in business confidence and depressed investment is worrisome, and we remain on the lookout for broadening signs that this cautious behavior is spilling into hiring decisions and other domestic economic sectors. Should this occur, it would risk kicking the legs out from under the expansion.

The Fed will also be a leading actor in the story ahead, with officials standing ready to provide further cuts as insurance against downside risks. For the most part, we believe the central bank’s shift to a more accommodative stance can help extend the economic expansion. Recessions are often brought on by overly tight monetary policy, a concern we won’t face in the near term, and, importantly for investors, bear markets outside of recessions are rare. 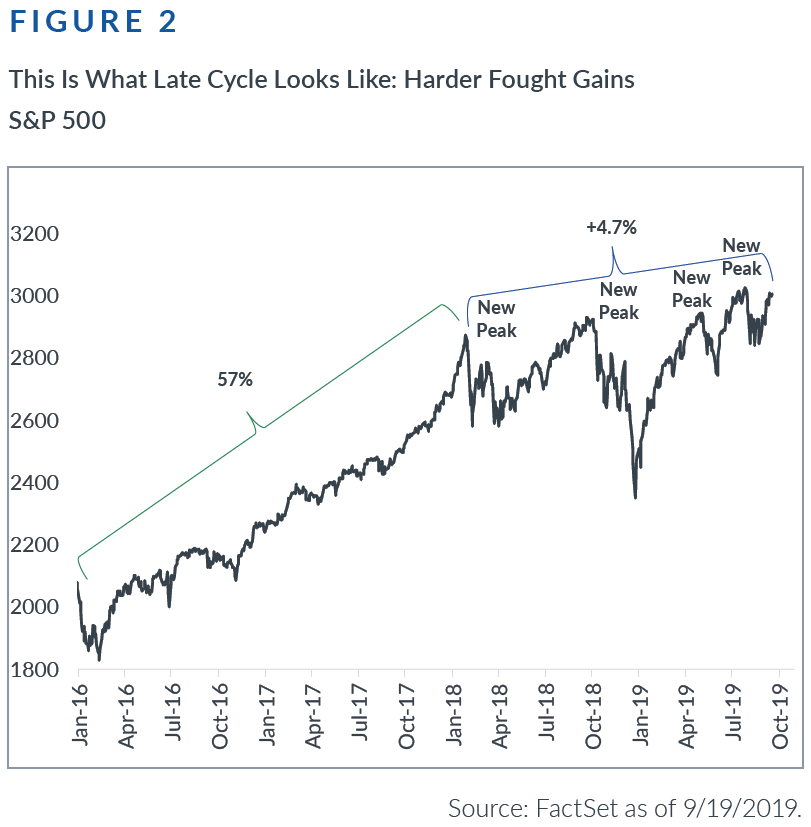 Given this, we’re not surprised by the recent market rebound, and we expect stock prices to hold on to reasonable gains for 2019. A slowing but expanding economy, modest corporate profit growth and low interest rates still provide a good environment for equity investing.

This won’t, however, spare the market from more bouts of overreaction in the months ahead. It’s likely trade uncertainties and the ongoing manufacturing downturn will continue to stoke concerns of an impending recession from time to time. Add to that the potential for future Fed policy moves to diverge from investor expectations, and more episodic swings in market sentiment shouldn’t be unexpected.

So is the glass half full or half empty? We think the economic reality lies somewhere between recent extreme perspectives, and we will continue to follow our late-cycle playbook of gradual risk reduction as valuations and risks of recession move higher. We still believe maintaining a portfolio of high-quality durable assets will beat a bond or cash portfolio in the months ahead, so we want to stay highly invested to earn our yield and growth. But as the cycle matures and risks rise, we will continue to take steps to protect our clients’ capital. 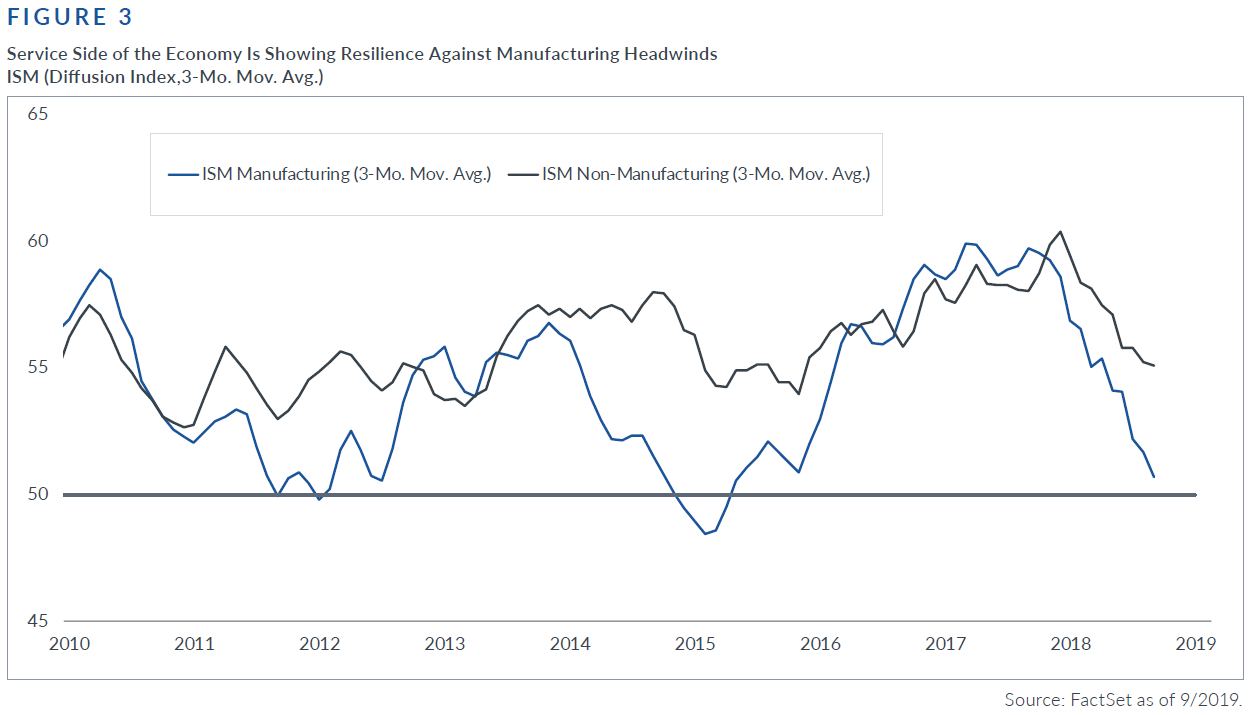 As anticipated, the Federal Reserve Bank voted to cut interest rates by 0.25% to the median level of 1.875%. This move will help cushion the economy against the global economic slowdown brought on by rising trade policy uncertainty. This is the second reduction in the past two months, following a string of nine interest rate increases that began in 2015.

The Fed is trying to sustain the expansion. This is part of what it calls its “mid-cycle” policy adjustment, which is being interpreted as more than one cut but not an extended easing cycle. The question for the markets is: How much more easing is in store? The Fed does not plan on any more interest rate cuts this year or next year. But that is the median of a range of forecasts from the 17 policymakers; underlying that median is a wide range of forecasts. The federal funds futures market expects one more cut this year. If the Fed does cut rates one more time, it would match the 75 bps in cuts that occurred in the previous “mid-cycle” easing periods that occurred in 1995 and 1998 (see Figure 4). Both of those were attributed to prolonging the expansion of the 1990s.

The Fed mentioned that the domestic economy continues to grow at a moderate pace, although the picture is mixed. Consumer spending has had solid growth, but the manufacturing sector has been weakening. 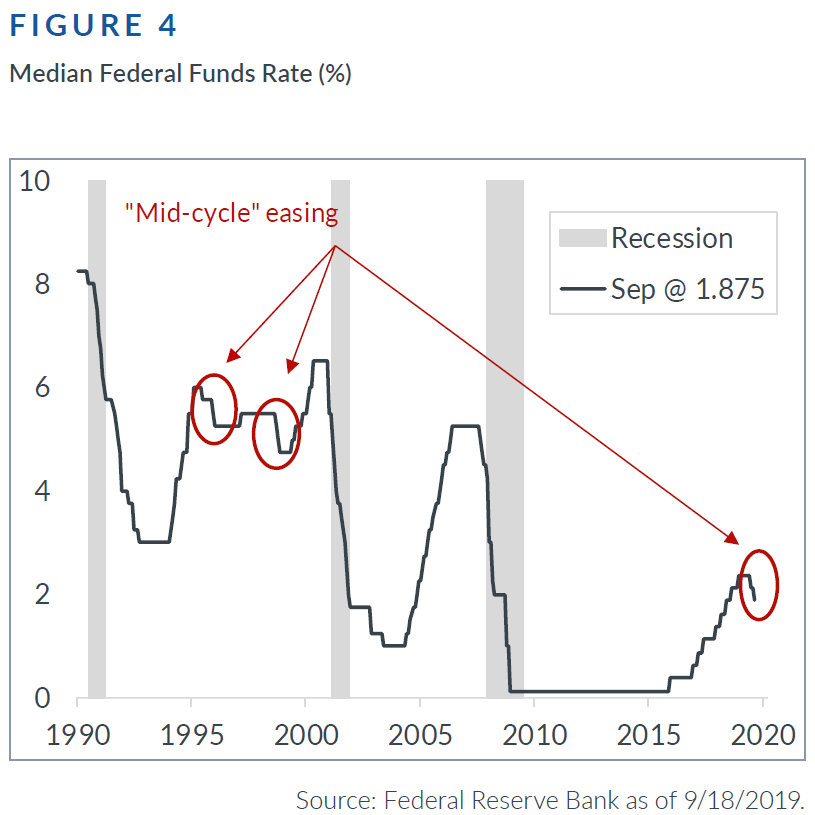 Payroll growth continues its upward trend, albeit at a slower pace than last year. However, it is hard to draw conclusions from such comparisons. About a month ago, the Bureau of Labor Statistics announced that it plans to revise down past data. 2018 will drop by about 40,000 jobs per month. It appears that while hiring has slowed, the pace has not dropped as abruptly as current published figures indicate (see Figure 5). The revised data will be released next year. The unemployment rate is unchanged at 3.7% and is just above the 50-year low of 3.6%.

There was some robust data in the report: stronger wage growth, rising labor force participation and a rebound in average workweek. Wages have risen solidly; the annualized rate is up 4.2% in the past three months – the fastest growth since 2007 (compared to a 3.2% year-over-year rate). The accelerating wage growth suggests that the pool of idle qualified labor has shrunk. The labor force participation rate is at 63.2%, matching the highest level in the past five years. 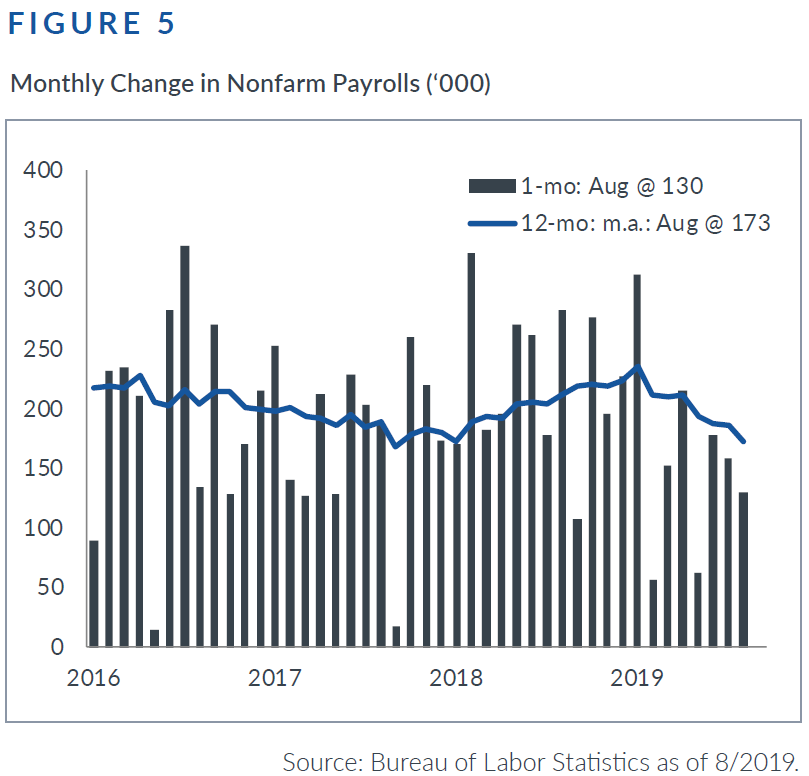 The hot streak in inflation is continuing. The yearly change in the Core Consumer Price Index (which leaves out the volatile food and energy components of inflation) is at 2.4%, above the Fed’s target level of 2.0%. Back in May, it was at just 2.0%. In the past three months, Core CPI has been up at a 3.4% annualized rate (see Figure 6).

Inflation momentum has been growing across a broad set of subcomponents. The recent increases have been attributed to a few volatile components. For instance, used car prices have been up 1.0% for each of the past three months. Part of that may be due to a new methodology that is being used to calculate pric-es. In addition, apparel prices are higher, probably due to tariffs, as we import most of our clothing. And air-fares have surged of late, which is being attributed to the shortage of aircraft following the grounding of the Boeing 737 MAX. 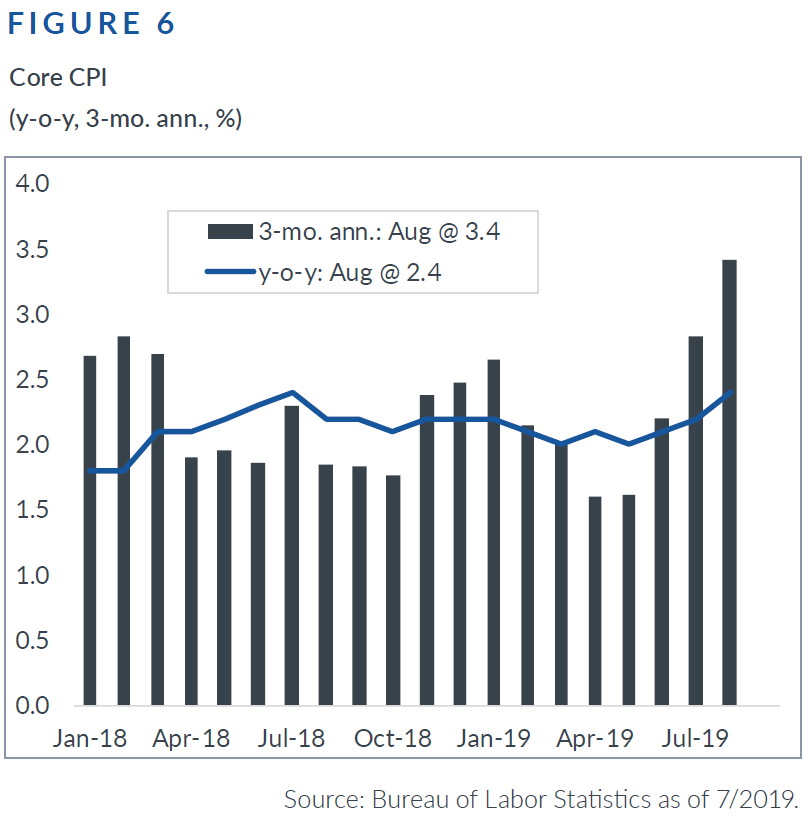 The European Central Bank is trying to avoid a downturn. Recently, the ECB met and took unexpectedly aggressive dovish steps, cutting its overnight rate further into the negative territory — from -0.4% to -0.5%. It will restart its quantitative easing program in November with monthly purchases of €20 billion, just nine months after it ended its previous bond buying program.

What surprised the markets the most was the aggressiveness of the ECB’s actions when it made its commitment to keep interest rates low for an open-ended period. It will not raise interest rates until inflation, which currently stands at 1.0% and has been drifting down for the past year, is near its target of around 2.0%.

This dovish shift should help economic growth, which has been trending downward since the end of 2017 (see Figure 7). 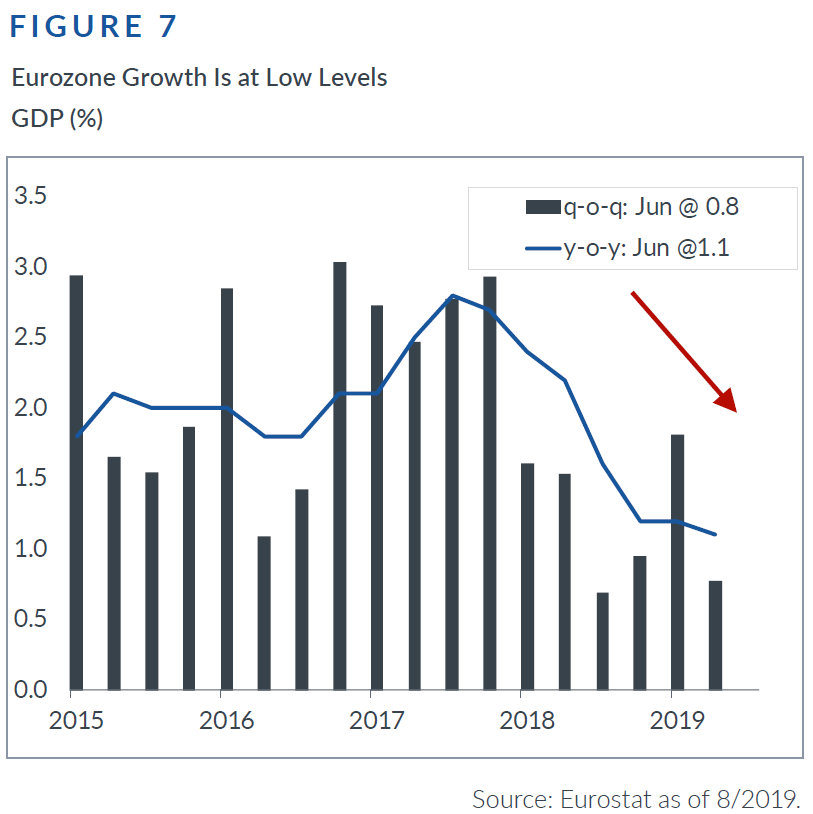 We will continue to follow our late-cycle playbook of gradual risk reduction as valuations and risks of recession move higher.

As anticipated, the Federal Reserve Bank voted to cut interest rates by 0.25% to the median level of 1.875%.

There was some robust data in the labor report: stronger wage growth, rising labor force participation and a rebound in average workweek.

Inflation momentum has been growing across a broad set of subcomponents.

The Consumer Price Index (CPI) is a measure that examines the weighted average of prices of a basket of consumer goods and services, such as transportation, food, and medical care. It is calculated by taking price changes for each item in the predetermined basket of goods and averaging them.

Indices are unmanaged, and one cannot invest directly in an index. Index returns do not reflect a deduction for fees or expenses.
You may also like...
Economic & Market Perspectives | Nov. 2019