A significant uptick in wage growth has taken a long time to arrive, which has perplexed many economists

There is a heightened increase in inflationary expectations

The U.S. economy’s vital signs are stronger than they have been in a very long time. Nearly nine years into the expansion, unemployment is close to all-time lows, and confidence is soaring. In fact, over recent quarters, GDP growth has accelerated to more than a half percent higher than the roughly 2% trend that official forecasters think is sustainable given productivity growth and labor market trends.

However, by doubling down on deficit-financed fiscal stimulus at a time of economic strength, Washington is embarking on a grand experiment with little precedent for a peacetime U.S. economy, and it brings considerable risks. In many respects, the stimulus is coming at an odd time. Most major increases in deficit spending have come in times of war or major economic challenges, not economic strength. From an historical perspective, the only other times the U.S. has deployed such large stimulus at this stage of the business cycle were during the Korean and Vietnam wars.

Over the near term, this heavy dose of fiscal stimulus should help raise demand and boost growth by giving American businesses and consumers more money to spend on equipment, homes, and other goods. Moreover, economists generally agree that tax reform is pro-growth if it broadens the base (such as by eliminating deductions) and reduces complexities while increasing productivity through incentives to work and invest. In the long run, this can boost the economy’s potential to grow.

But there’s a reason economists are fond of saying there is no free lunch. According to the Committee for a Responsible Federal Budget, the budget plan will add roughly $320 billion to the federal deficit over 10 years. Combined with recently passed tax cuts, the deficit will likely reach $1 trillion by the next fiscal year, almost double what the Congressional Budget Office had projected less than a year ago. And even more alarming, if the spending deal and tax cuts are extended, deficits are on track to top $2 trillion by 2027 (see Figure 1).

All this is coming at a time when debt is already rising relative to the size of the economy. Intensifying aging population pressures will escalate entitlement payments and challenge the government’s tax base. U.S. debt is now on track to reach $30 trillion over the next decade. That’s over 100% of projected GDP and well into the danger zone where research shows an economy’s ability to grow becomes materially constrained. Few developed countries are currently in that neighborhood; Greece and Italy are among them.

Just as taxes can be a drag on growth, so can higher deficits. Government debt attracts capital that would otherwise be invested in the private sector and puts upward pressure on interest rates, something our policymakers have spent the better part of the last decade taking extraordinary measures to keep down.

With the output gap almost eliminated and the unemployment rate below most estimates of the long-run equilibrium level, there is limited scope today for the economy to continue growing above potential without increasing inflationary pressures. In that case, the most likely outcome of a fiscal stimulus would be to cause the Fed to accelerate its plans for monetary tightening. It wouldn’t be long before higher interest rates cause economic activity to slow once more.

It’s possible to be so focused on the present that you shortchange the future. Ultimately, fiscal discipline will need to return, and this will weigh on economic growth. The greatest danger, though, is that the next economic downturn will likely occur alongside more hamstrung government finances. This could limit the extent to which Washington politicians can respond with stimulus measures when they will be needed most. 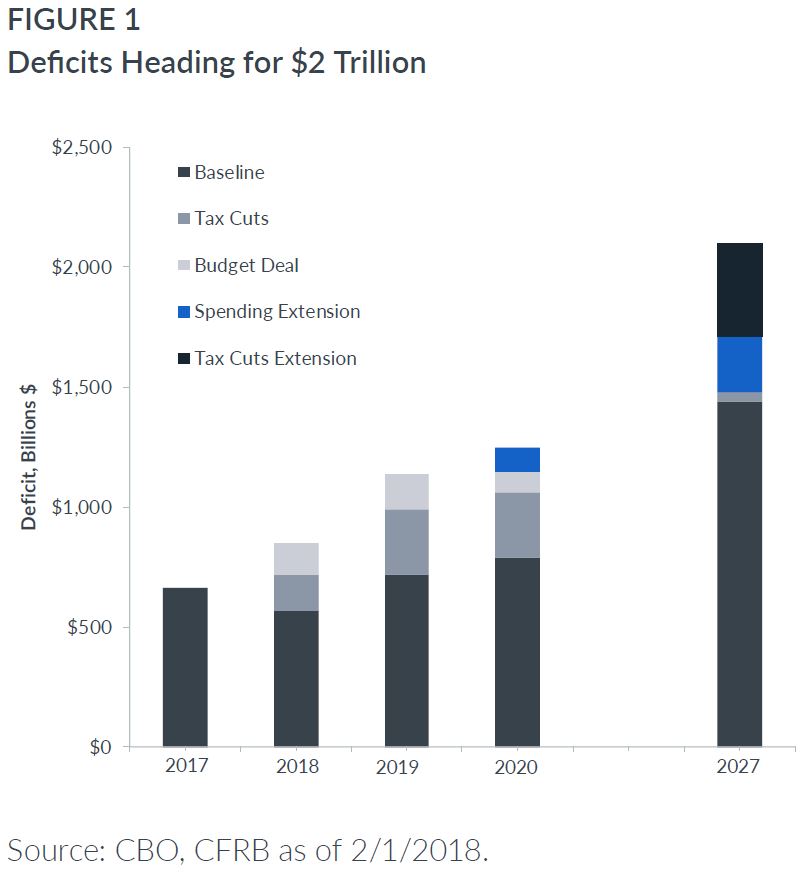 The minutes from the January Federal Open Market Committee meeting were released, which gave the public more insight into the Fed’s thinking on monetary policy. Some of its members raised their growth outlooks of economic conditions since the last time they met back in December. This increased optimism was due in part to the new tax plan, which will add $1.5 trillion in stimulus to the economy. The news helped lift the rate of the December contract of the federal funds rate, which currently stands at 2.11 (see Figure 2).

Federal Reserve Chairman Jerome Powell delivered an upbeat view of the economy during his inaugural briefing to Congress. Based upon the path it is on, he expects the next two years to be good for the economy. This is based on the strong fundamental issues of continued strength in the labor market, inflation moving up toward the target of 2.0%, continued economic strength around the globe, and domestic fiscal policy that has become highly stimulative. This buoyant view has increased the chances of the Fed raising the funds rate four times this year instead of the three increases it projected back in December. 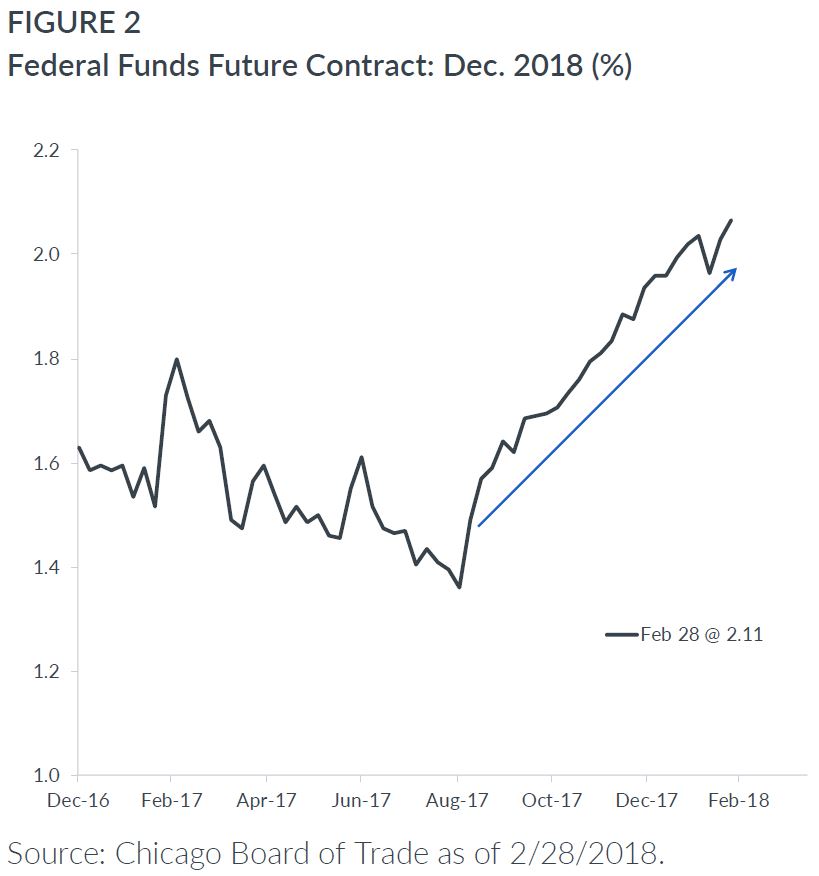 The most important news from the January labor report was the 2.9% increase in earnings for private sector workers for the past year. This is the largest increase since mid-2009, when the recession ended. A significant uptick in wage growth has taken a long time to arrive, which has perplexed many economists. The expansion is eight-and-one-half years old, the unemployment rate has fallen from 10.0% to 4.1%, and yet the average hourly earnings have averaged just 2.2% during that period of time, far less than in past expansions.

Although this report can be volatile on a monthly basis and the January report got a onetime boost from 18 states that increased their minimum wages, there are growing expectations that this upward trend will continue. Underlying this growth are the continued gains in employment (up 200,000 in January), which are greater than the number of workers entering the workforce. It is becoming more and more difficult to find qualified workers. With the economy strengthening, the number of job openings has shot up to record levels of around 6 million (see Figure 3). This is forcing employers to pay up for new workers. 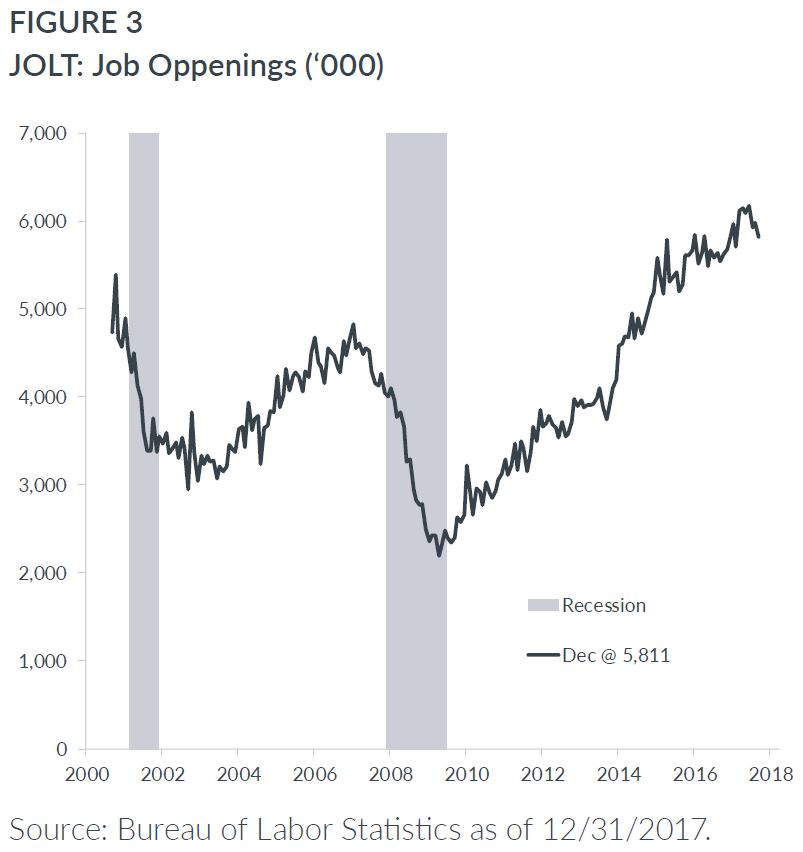 There is a heightened increase in inflationary expectations. Although the annual rate is at 2.1%, the same level it has averaged for the past five months, there has been growing pressure in the recent data. For the past three months, the Consumer Price Index (CPI) has increased at a 4.4% annualized rate. Much of that was driven by higher energy prices, which are up 26.6% in the past three months (annualized rate).

This by itself is not a significant concern because energy and food prices can be volatile. But combined with other ongoing fundamental factors, it has some worrying that inflation may pick up, and that the Fed will be forced to raise short-term interest rates at a faster clip. Some of these factors are the recent rise in average hourly earnings (which jumped to a 2.9% annual rate, the highest level since mid-2009—see Figure 4), stronger domestic and global economic growth, a late-economic-stage fiscal stimulus, slow gains in productivity, and fear that central banks may not reduce the stimulus quickly enough.

But the Fed’s preferred inflation gauge, core PCE, has not budged for several months, hovering around 1.5%. If it continues to stay low, as it did during the record-long expansion of the 1990s, the Fed might not need to be so aggressive with its rate hikes. Time will tell. 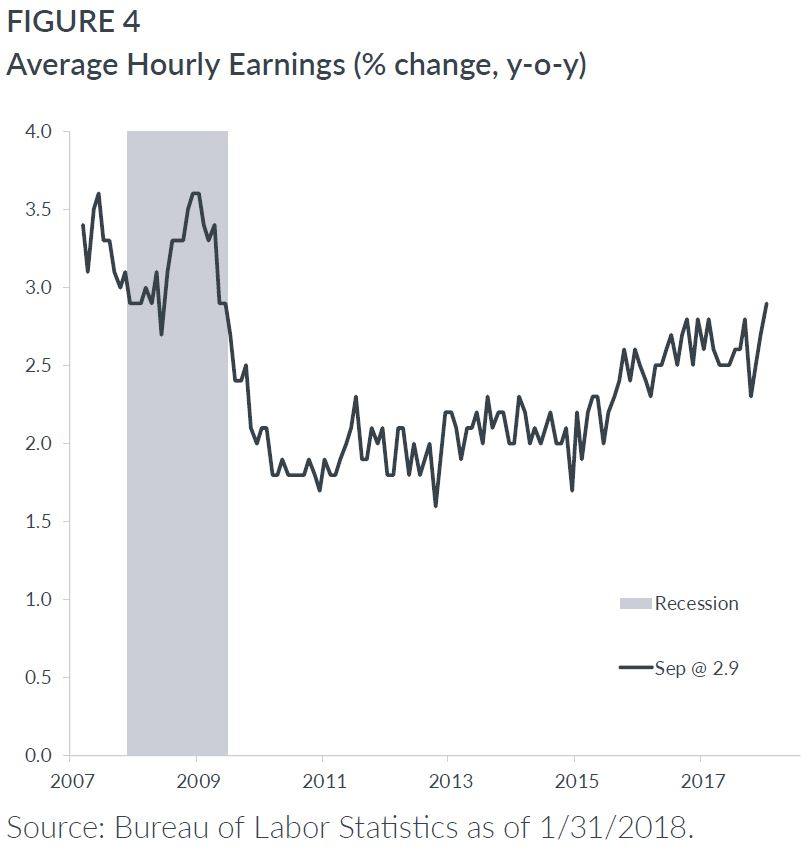 Views of the consuming public have been on an upswing since 2011. The February reading was at 99.9, near the highs of this economic expansion (see Figure 5). The increases in the past few years have been driven by the “present conditions” component of the index, which is currently at 115.1. In 2017, it averaged 112.7, which was the highest annual level since 2000. Consumers have been responding to the strength in the labor market (with unemployment down to 4.1%) and stronger household finances, which are due to a buoyant stock market that has boosted asset prices.

The recent increases seem to have been driven by tax reform. Many households are excited about the lower tax rates and the higher standard deduction. Furthermore, when these tax cuts start showing up in workers’ paychecks this month, sentiment may get another boost. As for the recent volatility in the equity and bond markets and increases in gasoline prices, those seem to have been brushed off by consumers. 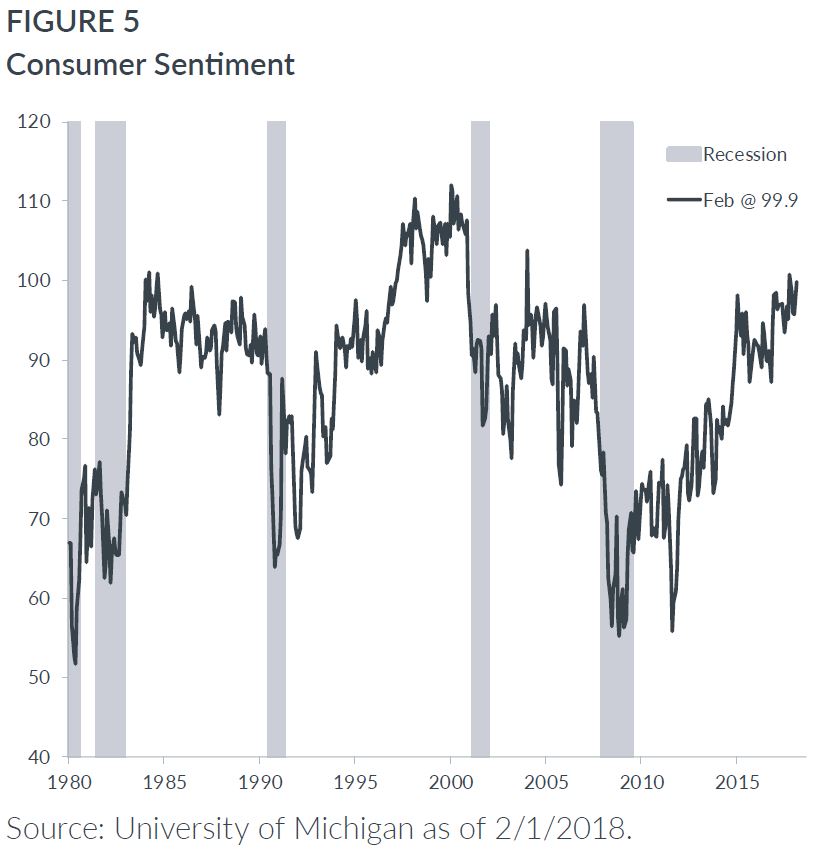 A significant uptick in wage growth has taken a long time to arrive, which has perplexed many economists

There is a heightened increase in inflationary expectations

Indices are unmanaged, and one cannot invest directly in an index. Index returns do not reflect a deduction for fees or expenses.
You may also like...
Market Perspectives | Jun. 21, 2018

How tight is the job market?