Firming price pressures have pushed the yearly change in the Consumer Price Index (CPI) to 2.4%

Economic growth advanced at a 2.3% rate in the first quarter of 2018

Although the yield curve has been flattening for several years now, its recent narrowing to the lowest level since 2007 is raising alarm bells in markets. The yield curve, which tracks the difference between longer- and shorter-term bond yields, typically flattens on the way to inversions, which tend to precede recessions. For now, we believe investors should consider this potentially bearish signal as just one data point within a bigger picture in which many positive signs remain.

An inverting yield curve has been a good leading indicator of recessions in the past, but there is almost no broader relationship between the relative flatness of the yield curve and economic growth. For example, the gap between 10- and 2-year Treasury yields was close to zero for most of the second half of the 1990s, but the economy remained unusually strong for most of that time, and stock markets soared. More recently, the yield curve was unusually steep between 2010 and 2015, yet GDP growth averaged only slightly more than 2%.

Even after the yield curve inverts, there has historically remained a reasonably long runway ahead before the next recession. Of course, equity bear markets tend to begin in advance of recessions, which is perhaps why investors are getting nervous about the curve’s flattening. Indeed, previous attempts to look past the yield curve’s predictive abilities have generally ended poorly. Still, there is good reason to believe this time may well be different, at least for now.

The yield curve inversions that preceded past recessions were driven by a sharp flattening in expectations for short rates, which are influenced by the Fed. In contrast, the curve’s recent flattening is largely due to a lower term premium (or compensation that lenders and investors demand for making longer-term loans) on long-dated bonds. This could reflect a number of factors, including the continuing net expansion of major central banks’ balance sheets, low and stable inflation, or a rebound in global savings.

If that’s the true signal of whether a recession is on the way, there is little cause for concern just yet. Nor will it stop the Fed from raising interest rates further. Not only do most indicators suggest economic fundamentals remain strong, but expectations are that U.S. GDP growth will pick up in coming months as tax savings start to add up and higher government spending begins to filter through the economy.

Despite the Federal Reserve’s five rate hikes in the last two years, the real federal funds rate has not yet turned positive (see Figure 1). From a historical perspective, no recession has occurred until the real rate rises to at least 2%. While it is not unusual for real rates to be negative for some periods, such as when the Fed is facing a recession, we have lived through and remain in an exceptionally lengthy period of negative real federal funds rates.

A key argument behind the Fed’s decision to keep rates at historically very low levels has been a lower estimate of the economy’s real neutral rate of interest—the theoretical rate that neither lifts growth nor holds it back. Long viewed as one of the great economic constants, the central bank’s projection of the neutral rate fell dramatically after the Great Recession, in part due to temporary headwinds left over from the financial crisis.

That central bankers seem now to be coming around to the idea that a number of those headwinds are turning to tailwinds is another way of saying they believe neutral interest rates are once again rising. If true, the Fed must hike rates in order to keep the degree of monetary accommodation steady. If policymakers actually wanted to tighten policy, they would have to increase rates even faster than planned. With the Fed looking set to hike rates another three times this year, there is a good chance we could see the yield curve flatten further in quarters ahead. However, there is a big difference between a Fed that is hiking to chase neutral rates higher and one that is hiking to slow the economy.

We would not be dismissive of a flatter yield curve altogether—it is an important input to our forecasts—and if the curve were to actually invert at some point, we would be more concerned. Still, a flattening yield curve is a natural byproduct of a maturing of the business cycle. The outlook for the economy, corporate profits, inflation, and level of interest rates are more important for determining the direction of the stock market than the shape of the yield curve, especially after a period of substantial manipulation by central banks. 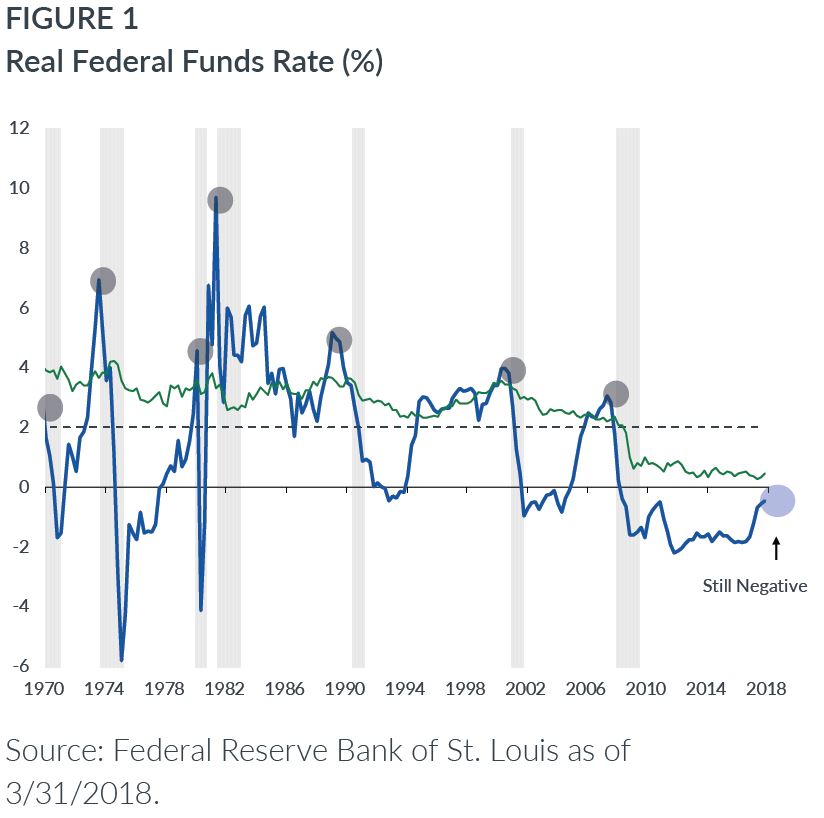 President Trump has nominated Richard Clarida to be the new Vice Chairman of the Federal Reserve. Clarida would replace Stanley Fischer, who resigned this past autumn. If confirmed, he will be part of the Fed’s leadership troika along with Chairman Jay Powell and incoming New York Fed President John Williams. These three will be the main drivers of monetary policy on the Federal Open Market Committee.

Clarida is a Professor of Economics and International Affairs at Columbia University and a Global Strategic Advisor for PIMCO. He has an established history of writing on economic and financial market matters. At PIMCO, he was one of the intellectual fathers of the “new normal,” a period of slow growth and low interest rates (specifically the neutral rate). Like many economists, he attributes this to low levels of productivity growth.

The longest continuous job expansion just hit a new milestone: 90 consecutive months of gains in non-farm payrolls. During this period of time, 17.6 million workers have been added to payrolls. This pace is greater than the number of new entrants into the labor force, thus bringing down the unemployment rate from the cycle high of 10.0%. 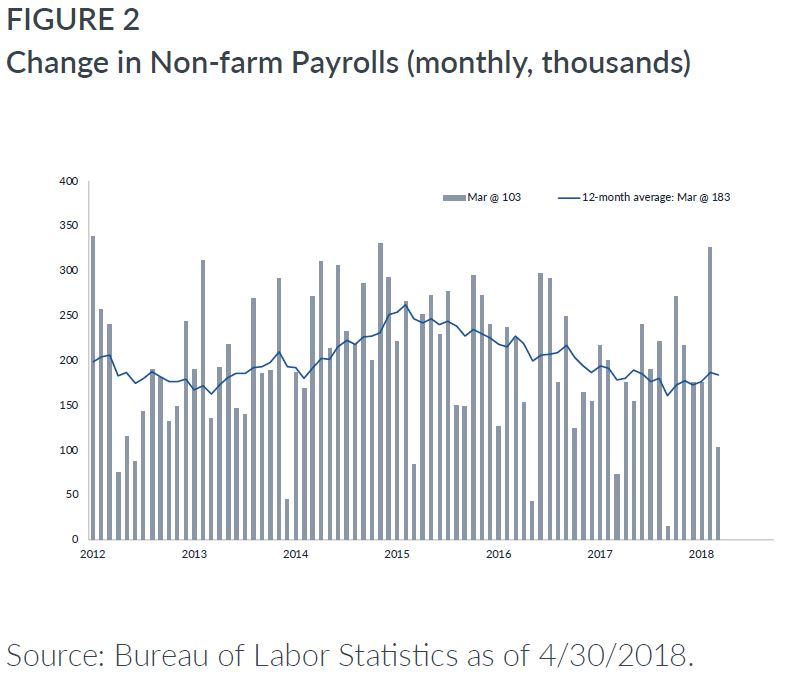 Payrolls in March rose just 103,000, but that follows an outsized increase of 326,000 in February. This series can be volatile on a monthly basis, so to follow long-term trends, we look at the data on a 12-month basis (see Figure 2). The data clearly show the rate of hiring has slowed since February 2015. This is not due to slowing demand for workers, but to employers having difficulty hiring new qualified employees. The number of job openings recently hit a record level of 6.3 million (see Figure 3).

For the sixth straight month, the unemployment rate held steady at 4.1%, the lowest level since December 2000. Average hourly earnings increased 2.7% in the past year. While this rate is higher than what was seen earlier in this expansion, it remains below long-run averages. 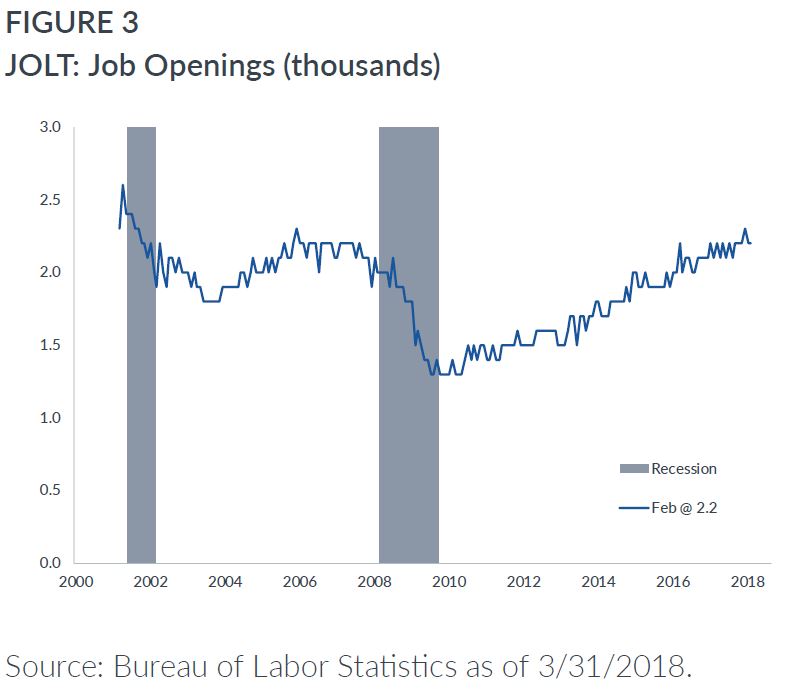 For several months, price pressures have been firming. This has pushed the yearly change in the Consumer Price Index (CPI) to 2.4%—well above the five-year average of 1.4%. Housing and medical costs have been the primary drivers of inflation during this expansion. Recently, there has been a firming in energy prices (oil, at $68.89 per barrel, is up $18.27 from last year). This has pushed the motor fuel component of CPI (3.3% of index) up 11.2% in the past year.

In the past year and a half, oil prices have been on an upward trajectory. Previously, OPEC and Russia had agreed to cut back oil production by 2.0% in an effort to lift prices. The strategy seemed to work (see Figure 4). The cutback reduced the excess supply of oil in the market (brought on, in part, to the increased production in the U.S. from fracking). In addition, stronger economic growth has fueled increased global demand. Oil prices are expected to remain firm for the near future. 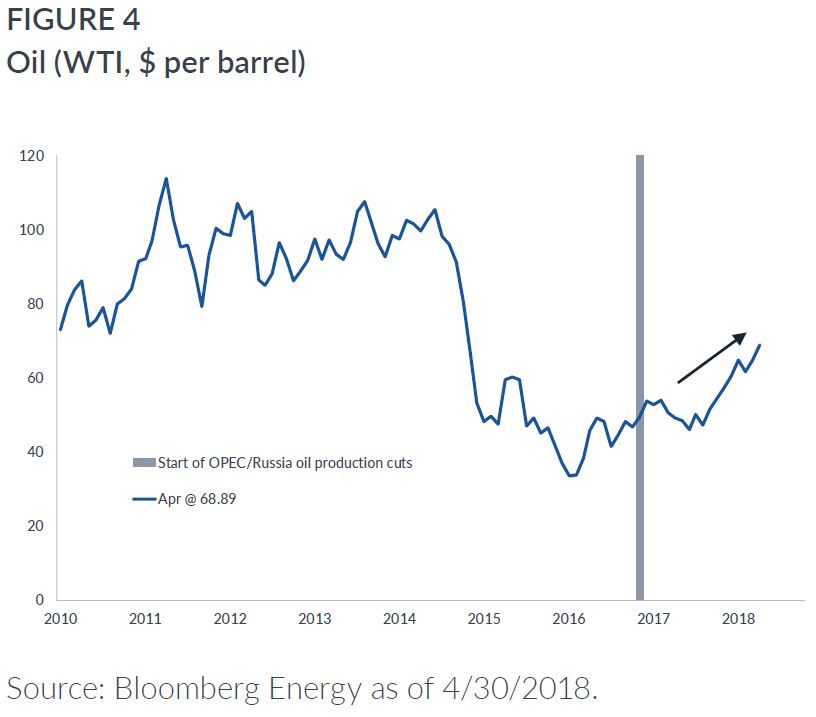 Economic growth advanced at a 2.3% rate in the first quarter of 2018, which helped push the annual rate to 2.9%, the fastest pace since June 2015. All four major categories of GDP contributed positively to this report (see Figure 5). First-quarter growth was the slowest pace of the past four quarters, reflecting a cooling of consumer spending, which edged up just 1.1% due to harsh winter weather and delayed tax refunds. This is a significant drop from the 4.0% growth in the fourth quarter of last year, which was above trend due to spending on vehicles that were damaged in hurricanes.

Business investment was solid, growing 6.1%. It was aided by a 12.3% surge in the structure component, responding to the higher oil prices that pushed investment in oil and gas drilling. This growth marks the fourth quarterly increase of more than 6.0% in the past five quarters, as many companies have grown more confident about the economy.

Also, many firms are replacing aging equipment and installing labor-saving technology. Other sectors that added to growth were real exports and strong federal government outlays as defense spending had another strong quarter. 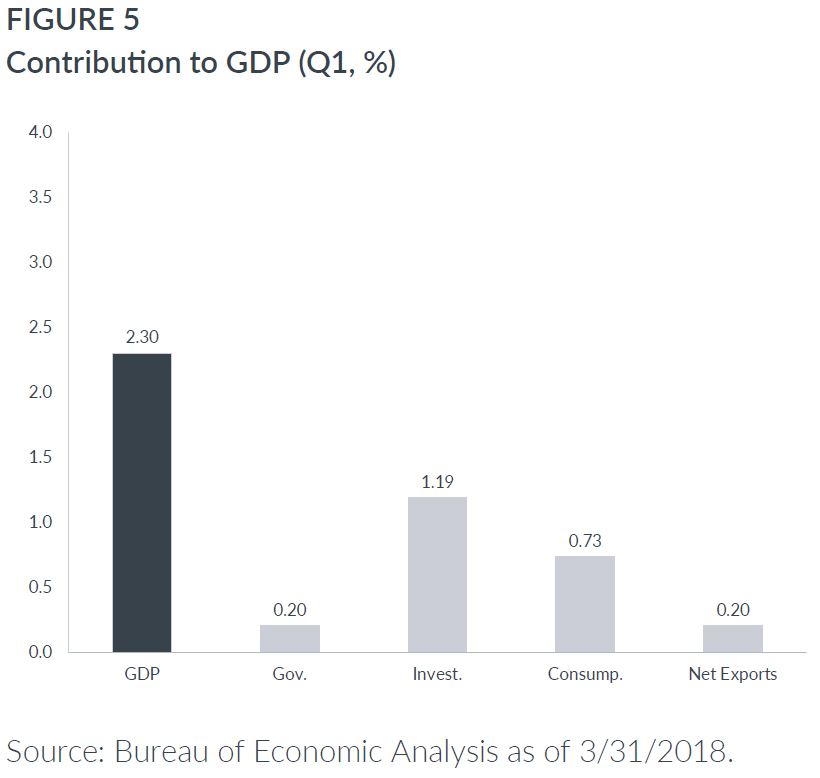 Firming price pressures have pushed the yearly change in the Consumer Price Index (CPI) to 2.4%

Economic growth advanced at a 2.3% rate in the first quarter of 2018

The Michigan Consumer Sentiment Index (MCSI) is a survey of consumer confidence conducted by the University of Michigan that uses telephone surveys to gather information on consumer expectations regarding the overall economy.