Although people have constantly underestimated the strength of this historic bull market, solid fundamentals are primarily responsible for driving it higher

We are not ready to call the end of the cycle

The U.S. equity bull market, now the longest running in history, continues to defy skeptics. Since March 2009, the S&P 500 index has nearly quadrupled in value, adding trillions of dollars to household wealth. Few would have predicted such a long, rewarding run as the market struggled to find its footing in the aftermath of the financial crisis. Yet rarely has a bull market been so unloved.

Generally, this far into a bull market, a sort of mania kicks in. In 1929, brokers were swapping stock tips with shoeshine boys. In 1999, factory workers were quitting their jobs to trade tech stocks from their living rooms. In 2007, taxi drivers were flipping houses. This time around, it seems each successive stock market record causes more hand-wringing than cheerleading.

There’s anxiety about overhyped shares, about central banks withdrawing support, about valuations possibly being too high, about the expansion aging. Equity flows into mutual funds and ETFs have actually been negative over the past 15 months, and everywhere you look, there seems to be another article warning about a supposed bubble in one asset class or another. It’s enough to make one wonder if there’s a bubble in declaring bubbles.

Still, such skepticism can be a healthy for stocks. Market peaks have often been characterized by a sense of euphoria where risks are ignored in favor of surging gains. The opposite is happening today. Instead of piling into stocks, investors are acting with a measure of hesitation, helping prevent some of the excesses that preceded previous bear markets.

Coming into the year, our outlook was optimistic but tempered. Strong earnings, full but fair valuations, and low recession risk made a pretty compelling argument to remain overweight U.S. equities. Still, we urged clients to brace themselves for greater volatility and harder-fought gains as markets began to adjust to a more typical late-stage environment of higher inflation and interest rates.

Not much in our outlook has changed since then. U.S. equities are again quietly putting together a solid year, outperforming international stocks by a wide margin. But the path to higher gains hasn’t been a smooth one. For most of 2018, the stock market has been in a tug-of-war between policy risks and strengthening fundamentals. From trade wars to a flattening yield curve to a global economic slowdown, financial headlines have continued to cast doubt on the bull market’s sustainability, despite improving economic growth and corporate profits.

Indeed, although people have constantly underestimated the strength of this historic bull market, solid fundamentals are primarily responsible for driving it higher. Between March 2009 and June of this year, reported earnings for the S&P 500 have soared an astonishing 1,688%. Compare that to earnings gains of 162% during the 2003-2007 bull market and the 134% increase in the 1990s. 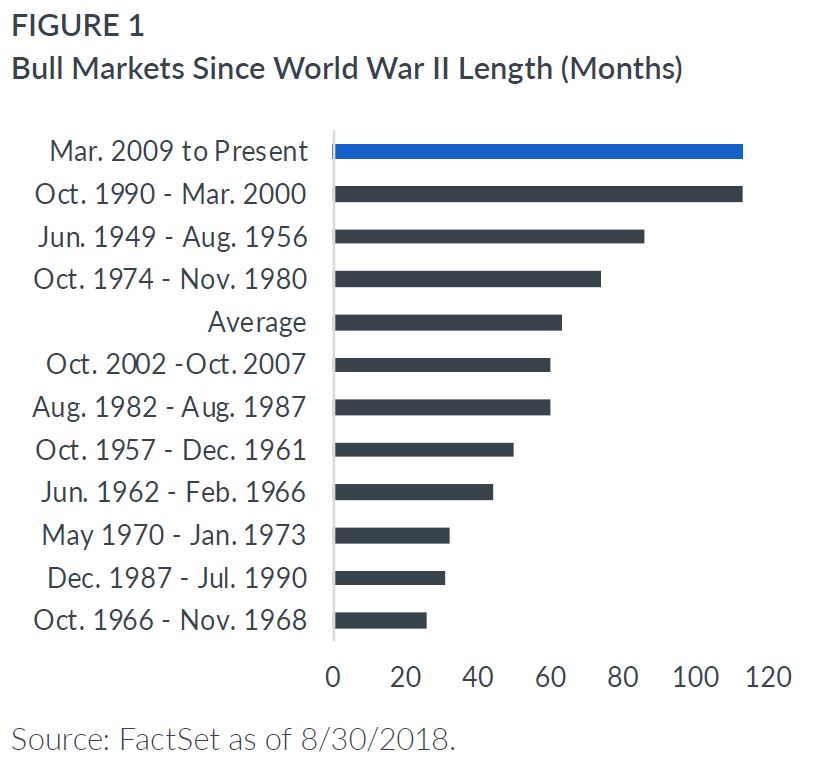 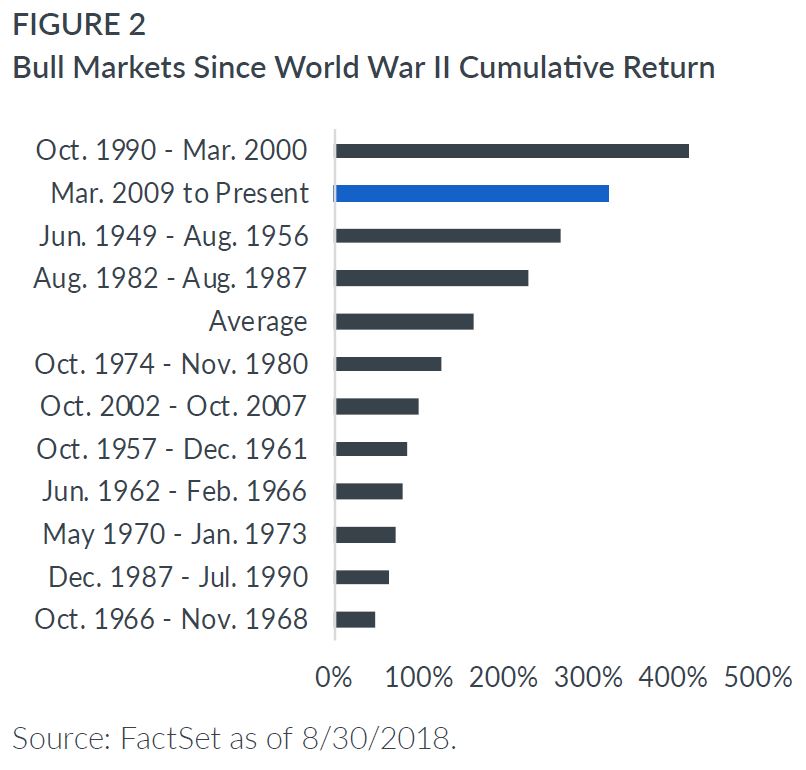 We have long argued that stocks eventually follow earnings, and lately earnings growth has been particularly robust. The S&P has just experienced two consecutive quarters of nearly 25% earnings growth, while sales growth, an even better barometer of companies’ underlying strength, may top 11%—the strongest rate since the third quarter of 2011. This is signaling that the earnings story is not just about tax cuts and that the economic foundation is supporting rising demand, allowing companies to grow profits beyond just cost-cutting measures.

All this leads us to conclude that we are not ready to call the end of the cycle. Negative headlines are likely to continue affecting markets in the near term and weigh on sentiment, but unless the aforementioned issues start to actually impact earnings expectations, we think stock prices will continue to gradually grind higher—though likely not in a straight line up. At the same time, interest rates, though rising, remain historically low, keeping stocks attractive versus other investment options like bonds.

No one can predict precisely when a bull market will end, but investors eyeing each turning page of the calendar for an expiration date are making a mistake. Bull markets don’t die of old age; they are scared to death. And generally what they’re afraid of most is recession, which would harm corporate probability. In our analysis, the economy remains on sound footing and, nine years into the expansion, there are still few signs of the normal excesses that might sow the seeds of the next economic downturn. As long as valuations remain reasonable, this should provide support for corporate profits ahead and help lengthen the bull market further. And maybe finally provide a little love, too. 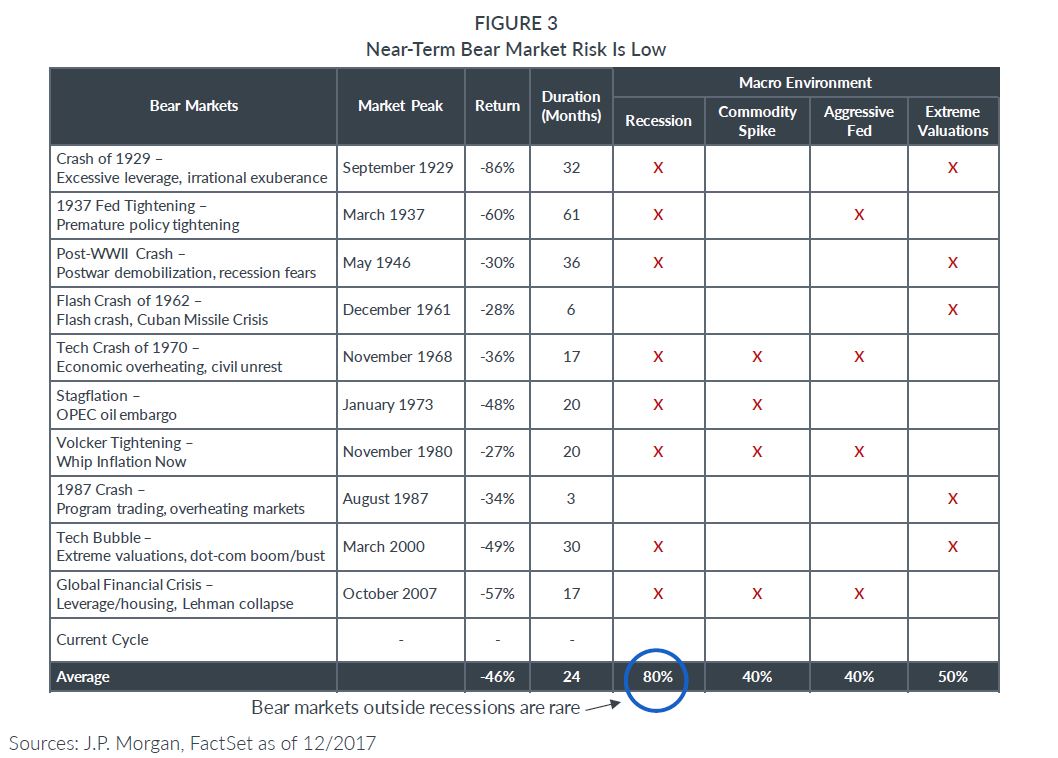 Although people have constantly underestimated the strength of this historic bull market, solid fundamentals are primarily responsible for driving it higher

We are not ready to call the end of the cycle