Confidence of consumers, companies is important

Fifty years ago, America found itself on the brink of a major international crisis. The problem wasn’t nuclear missiles in Cuba or a big wall in Berlin. No, the problem was frozen chicken. This strange, forgotten piece of history had its start back in 1962, when, following the introduction of factory farming, the U.S. began producing chickens on a massive scale and sending them overseas, where chicken was far rarer and more expensive. After tense negotiations failed, European countries began instituting huge tariffs in an effort to protect local farmers from being edged out of the market, and the Johnson administration quickly retaliated with the so-called “Chicken Tax,” a 25% tariff on light trucks and other products.

Fortunately, the great poultry war of the 1960s was short-lived, and most of the tariffs were soon lifted. However, the one on imported light trucks remains in place to this day, causing lasting distortions in the marketplace. By insulating U.S. automakers from foreign competition, the tariff has reduced pressure on them to innovate and match competing international models with increased fuel economy. It has also caused both foreign and domestic automakers to go to great, almost comical, lengths to circumvent the tariff. Ford, for example, imported the Transit Connect as a passenger vehicle from its plant in Turkey, then stripped the vans of their rear seats and windows once they were in this country. Although the move cost the company thousands of dollars, it saved thousands more in taxes. For American truck buyers, however, the Chicken Tax has only meant higher prices and fewer options.

Financial markets seem to be of two minds about the impact of mounting trade tensions between the U.S. and its global trading partners. Despite the escalating tit-for-tat between countries, tariffs enacted so far affect only a relatively small part of overall GDP. The consensus is that these measures should not have a significant and lasting impact on the U.S. economy, or on U.S. stocks, and may even help bring about fairer trade in the long run. Still, each escalation increases the risk of slipping, either deliberately or inadvertently, into a full-blown trade war that would significantly damage corporate earnings and overall economic growth, thereby hurting equities, especially non-U.S. equities.

Given the fluid nature and complexity of the situation, confidently predicting an eventual resolution is difficult. The $34 billion in tariffs currently in place on Chinese goods amounts to a drop in the bucket of a nearly $20 trillion U.S. economy. But the Trump administration appears to be playing an escalating game of chicken with the global trade community, and no major economic region or trading partner has been spared from threatening rhetoric. Already the president has signaled his willingness to put tariffs on all Chinese goods imported to the U.S., which would amount to more than $500 billion. Meanwhile, his team is investigating whether to place tariffs on the roughly $360 billion worth of auto, truck, and car parts that were imported from European and other foreign nations last year. In addition, there are the ongoing NAFTA negotiations, which affect more than $1 trillion worth of annual trilateral trade. 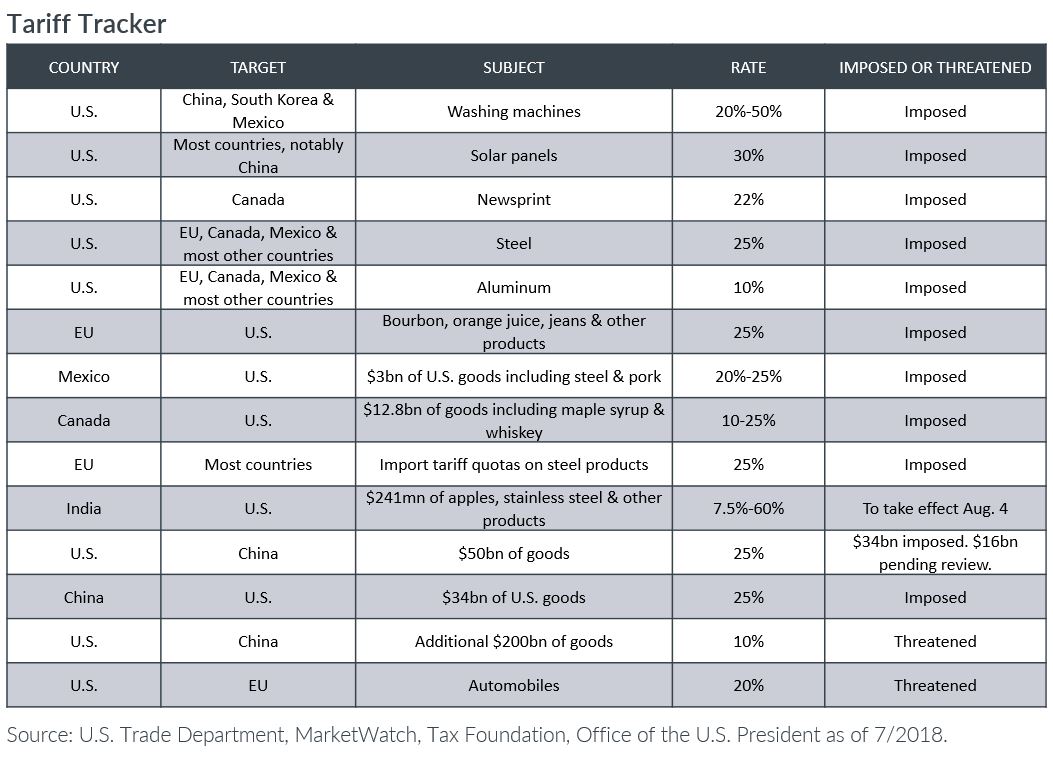 It’s not hard to see how quickly trade actions could begin to add up and have a noticeable impact on economic growth. For example, RBC Capital Markets estimates that if the U.S. and China were to levy 25% tariffs on all imports from each country, and China were to include additional non-tariff barriers so as to match the total U.S. tariffs, this would subtract a little more than one-half of a percentage point from annual U.S. GDP growth. According to the Tax Foundation, if the Trump administration also enacts additional auto tariffs, GDP would fall by an additional 0.36%, resulting in 0.26% lower wages and 277,825 fewer full-time equivalent jobs.

Quantifying just how much damage a broad trade battle could wreak upon the economy is a tricky task, and one made more challenging by the difficulty in estimating the effects of private sector uncertainty, which can exacerbate the shock from tariffs themselves. For now, the U.S. economy appears in good shape and able to withstand some trade-related headwinds. There is an ongoing tailwind from tax reform, job growth remains strong, and optimism over future economic conditions is high. But there are potential “second order” effects that we believe could be more serious. If the confidence of consumers or businesses is shaken, spending and capital investment might level off or decline, which could lead to a short-circuiting of the economic expansion and bull market.

While international equity markets have been weighed down by escalating trade tensions, this caution hasn’t yet shown up in the U.S. stock market in a significant way. In fact, U.S. stocks have largely recovered from their first-quarter declines, buoyed by solid economic data and very strong corporate earnings. Still, we think stock prices would be higher today were it not for trade issues. And this new era of protectionism could hardly have come at a more sensitive time for markets. While the backdrop for growth is indeed strong—particularly in the U.S.—financial assets were already bracing for tighter financial conditions as the world’s major central banks step back from stimulus. 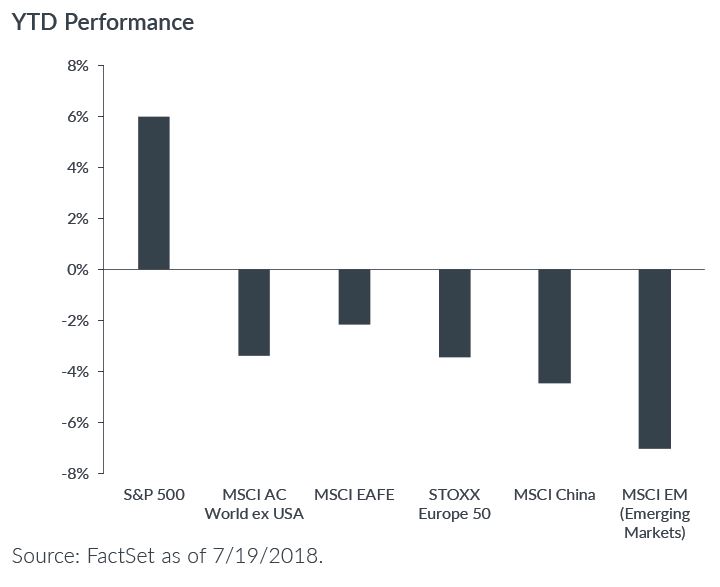 Our asset allocation and investment strategies are positioned to take these uncertainties into account. We are overweight U.S. equity markets and underweight international equity markets, which we believe will continue to be more affected by trade disruptions. Likewise, our domestic equity strategy has little exposure to the sectors we believe will be most likely impacted by an escalation in tensions, such as autos and semiconductors. It is from this relatively strong position that we are watching the markets, looking for signs that conditions may deteriorate but also keeping an eye out for opportunities. For example, we recently added some short-term emerging market credit as spreads widened out to levels we felt incorporated a worst-case outcome.

As portfolio managers, it is our job to get ahead of the curve and work proactively to manage risk in our clients’ portfolios. This requires the ability to respond dynamically to a changing economic outlook and shifting market conditions. All sides of the trade disputes have incentives to resolve their differences, and we think this will occur eventually. But, in the meantime there could be more heated rhetoric and additional tariffs implemented that could keep equity markets off balance. Indeed, as the Chicken Tax shows us, the history of trade actions is rife with unintended consequences. 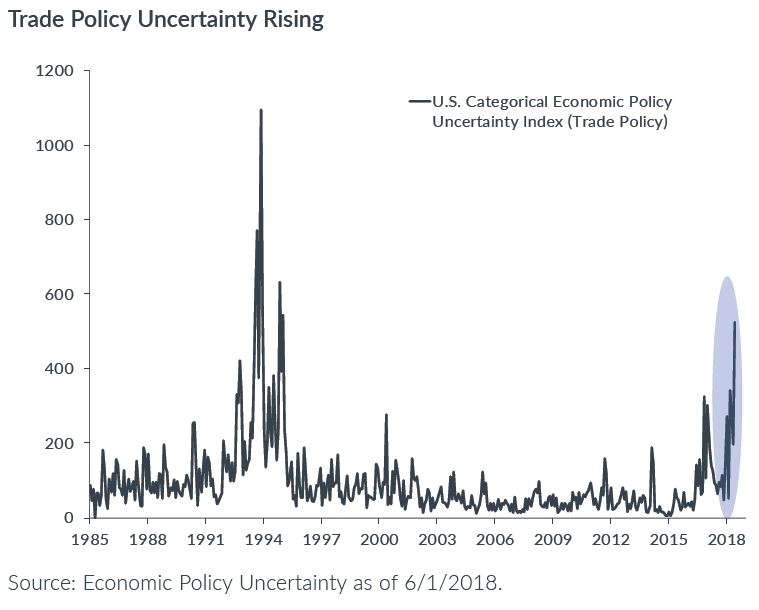 Confidence of consumers, companies is important 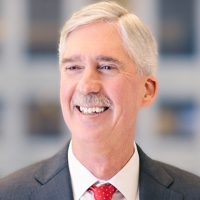 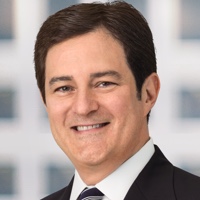 Concentrating assets in the real estate sector or REITs may disproportionately subject a portfolio to the risks of that industry, including the loss of value because of adverse developments affecting the real estate industry and real property values. Investments in REITs may be subject to increased price volatility and liquidity risk; concentration risk is high.

As with any investment strategy, there is no guarantee that investment objectives will be met, and investors may lose money. Returns include the reinvestment of interest and dividends. Investing involves risk, including the loss of principal. Diversification may not protect against market loss or risk. Past performance is no guarantee of future performance.

The MSCI ACWI ex USA Index captures large and mid cap representation across 22 of 23 Developed Markets (DM) countries (excluding the US) and 24 Emerging Markets (EM) countries*. With 2,154 constituents, the index covers approximately 85% of the global equity opportunity set outside the US.