The news seems to focus on the risks of the economy being in a recession or soon to enter a recession. This can be seen in the number of people asking that question to Google, which has skyrocketed (chart one). 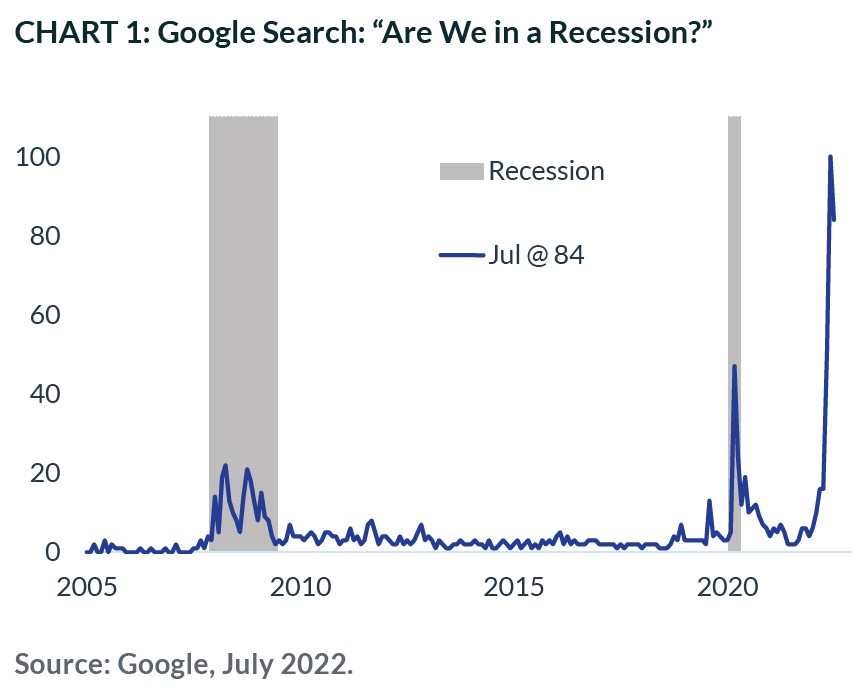 It is not officially known whether the economy is in a recession or not. The National Bureau of Economic Research (NBER) is the self-appointed arbiter of the American business cycle and has been dating recessions for almost a century. They are precise with the start and end dates of a recession, but they are not timely when announcing when they happen. They need to wait for the release of economic reports and revisions before making a decision. They take a deliberate retrospective approach, so they do not have to revise. Since 1980, there has been an average of 7.2 months from the start of a recession to the NBER announcement (chart two). 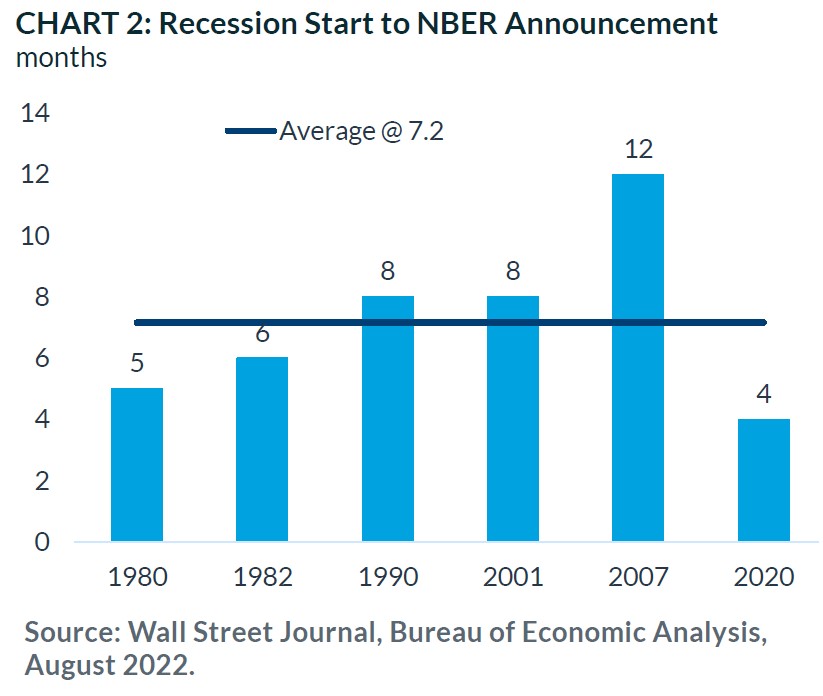 The NBER defines a recession as a significant decline in economic activity spread across the economy, lasting more than a few months. It is usually visible in real GDP, real income, employment, industrial production and wholesale-retail sales. Three of the six indicators they follow are directly related to the labor market. The others deal with income, spending and manufacturing. For the past three months, five of these six indicators have been in positive territory (chart three). 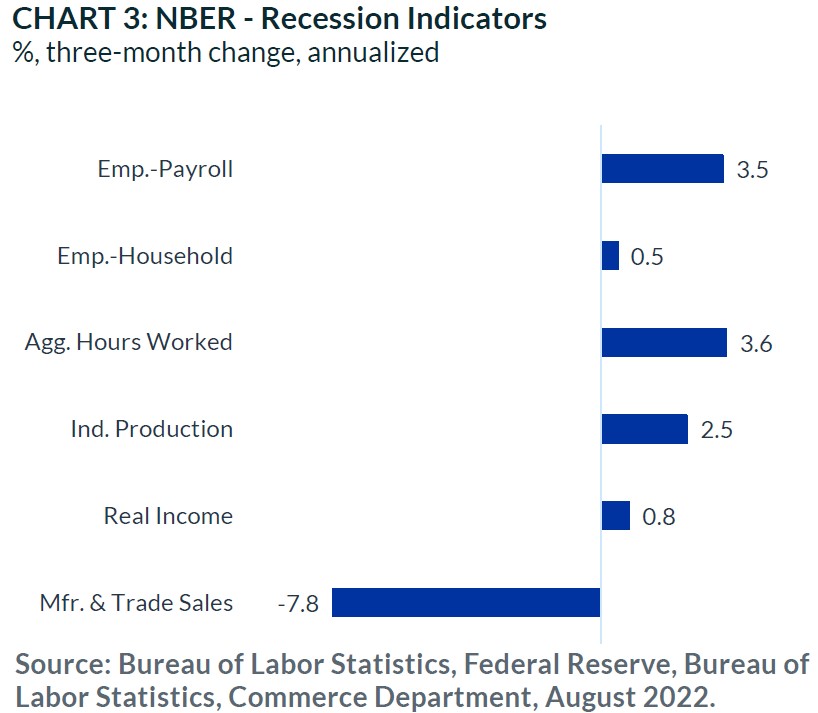 So although many may think the economy is in a recession, it probably is not now. That said, the pace of growth of these indicators has been slowing. But slowing is not contracting. The important question is where the economy is headed. Is it transitioning to a slower, more sustainable pace or to a contraction? Complicating the outlook is the Fed, which is firmly committed to reducing the high pace of inflation by raising interest rates by another 100 basis points (bps) by yearend. This will put the funds rate above the neutral level and well into the restrictive territory (chart four). 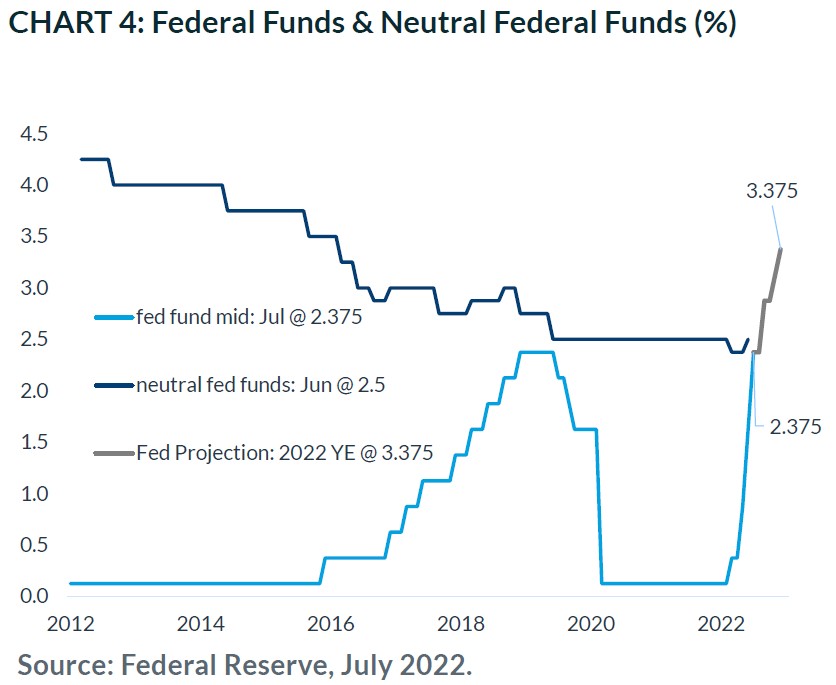 With the Fed actively trying to slow the pace of economic growth, the path to a soft landing is becoming narrower, and the risk of a recession continues to grow.

The risk of a recession depends on how active the Fed will be in reining in inflation. Inflation may have peaked in June, when the consumer price index hit 9.1%. Future reports are expected to show inflation is moving downward in the direction the Fed wants. But will the decline, if it happens, be fast enough for the Fed, or will they have to increase the pace of interest rates, which increases the risk of entering a recession? More data needs to be released to get a better understanding.

US equities have staged a strong rally over the past two months, aided by declining commodity prices, easing inflation expectations and lower bond yields. However, bear market rallies are common historically, and major bottoms tend to see a retest of previous lows. With continued strength in job gains suggesting the Fed will have to stay aggressive in its fight against inflation, recent market momentum might be difficult to sustain, and investors should brace themselves for renewed volatility in the months ahead.

Labor demands are intense, with wage growth increasing 5.2% year over year, twice as fast as the pre-pandemic average.1

The strong wage growth worries the Fed, which views it as a significant risk to reducing inflation.2

The increasing mortgage rates have slowed the pace of existing home sales, which have fallen for five straight months.3

Personal spending rebounded in June following a slowdown in the spring. Summer spending should be more robust due to solid travel activity.4

Inflation has eased off its 40- year high as a significant drop in gasoline prices has helped bring the annual rate down to 8.5%.1