The Bottom Line: Reports of the Death of the US Economy Have Been Greatly Exaggerated

Although data over the past few weeks has shown a loss of economic momentum, a recession is not expected in the near term. Aside from the slowdown in spending, there has been a bifurcation taking place in the data. The survey data (often called “soft data” – such as consumer sentiment) suggests the economy is on the brink of a recession. But the actual activity data (“hard data” like the labor report) continues to show strength in the economy.

There is a great deal of confusion about the correct definition of a recession. In the US, a recession is not defined as two consecutive quarters of negative Gross Domestic Product (GDP); it is determined by a subcommittee of the National Association of Economic Research called the Business Cycle Dating Committee. The committee consists of eight economists, a who’s who of Presidential advisors, textbook writers and experts on business-cycle theory. The subcommittee defines a recession as a significant decline in economic activity spread across the economy that lasts more than a few months. It is normally visible in real GDP, real income, employment, industrial production and wholesale-retail sales (all hard data). Of the four subcomponents, three of them are still trending in the positive territory (see charts). 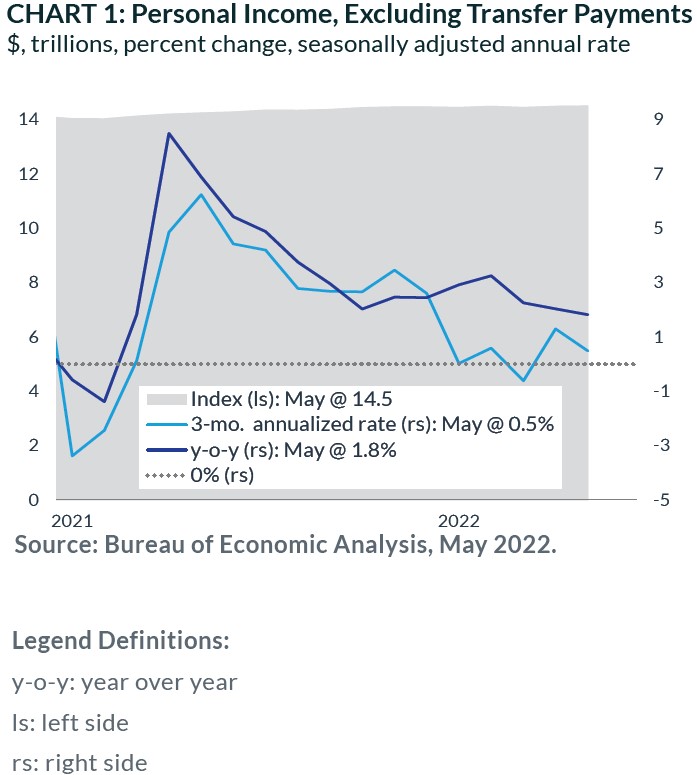 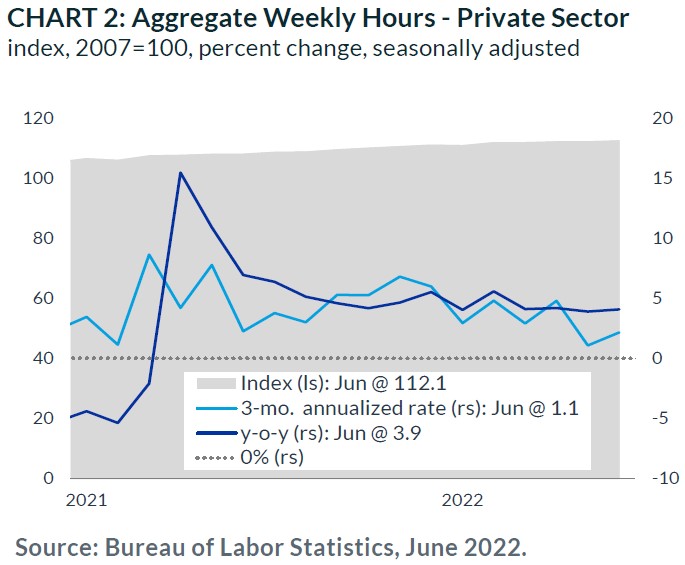 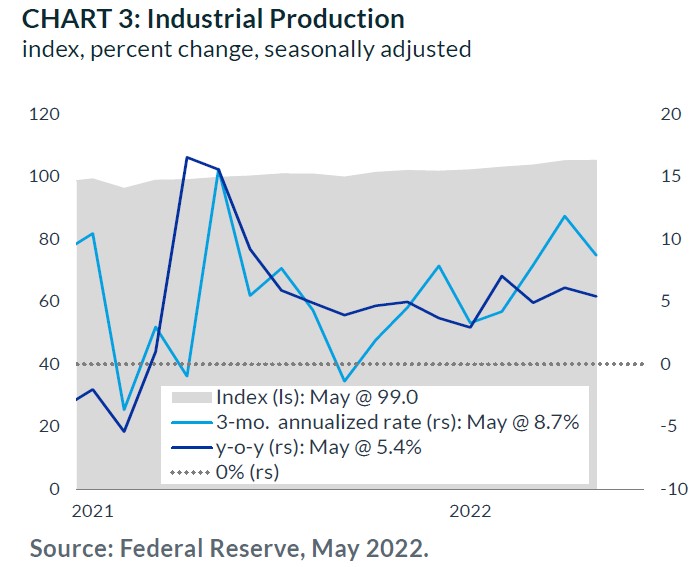 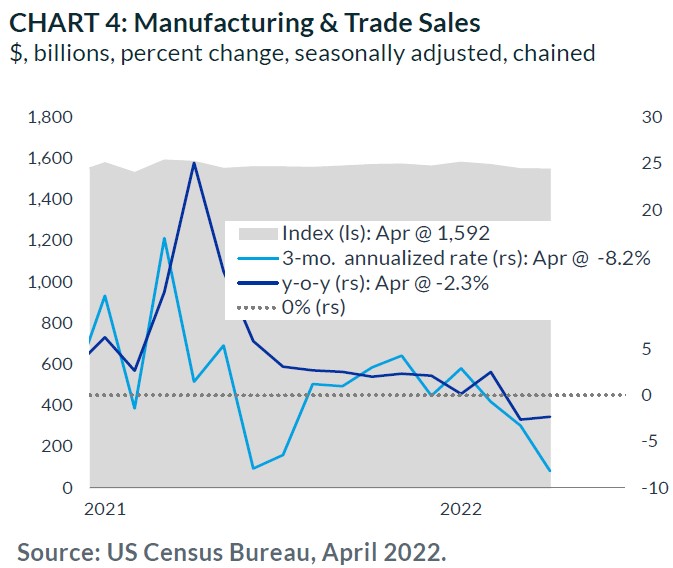 Based on that definition, the economy is not currently in a recession — there has been a slowdown in economic activity, not a decline. Although the first quarter had negative GDP growth (-1.6%), that was brought on by a huge trade deficit that took away 3.2 percentage points of growth – it is actually a sign of economic strength (domestic demand is more robust than domestic production). Furthermore, employment continues to be strong, with the unemployment rate holding steady at near-50-year lows of 3.6% and demand for workers outpacing the number of those looking for a job — again, a sign of strength.

Although the economy is not currently in a recession, there are many headwinds that will continue to restrain the pace of growth in the future. Some of the headwinds are higher inflation and interest rates, a limited amount of qualified workers, persistent supply chain issues, reduced consumer demand, and lower profitability. These will slow the pace of economic growth, which is precisely what The Federal Reserve wants to do to help bring down inflationary pressures.

The $64,000 question is, Will the economy go into a recession? The answer heavily depends on how aggressive the Fed needs to be in its battle against inflation. It is still too early to know the answer to that question. That said, with the headwinds mentioned above, an aggressive Fed and recent spending data being revised downward, we recently increased the probability of a recession occurring in the next year to 50%, an increase from the previous forecast of 30%.

Despite having corrected roughly 20%–30% thus far, equity markets are likely to remain volatile in the coming months, and further declines are possible. Although valuations have adjusted quite a bit, consensus earnings estimates remain too high and have not yet discounted the increasing risk of an economic downturn. Before a durable bottom is reached, we think investors will need better clarity on the path of inflation and Fed tightening as well as the outlook for sustainable economic and earnings growth.

The number of workers in the private sector has now surpassed the pre-pandemic peak.1

The labor market is not slowing fast enough for the Fed. As a result, we expect the Fed to raise the funds rate by at least 75 basis points (bps.) in late July.2

Mortgage rates, which have jumped about 200 bps this year, are helping to cool the red-hot housing market.3

Spending data for this year has been revised downward, showing the consumer is responding to higher inflation and lower confidence.4

The consumer price index (CPI) surged in June to 9.1% year over year, led by a sharp increase in gasoline prices, which have fortunately fallen since the CPI survey was conducted.5

Oil and gasoline prices have been falling since hitting a peak in mid-June over concerns that a possible global recession will reduce demand.6

Market Perspectives: Where are we headed?