The labor market remains red-hot. In the first four months of this year, payrolls have increased 2.1 million, which is considered a good rate of growth for a full year (chart 1). There is evidence supporting a continuation of this strength. 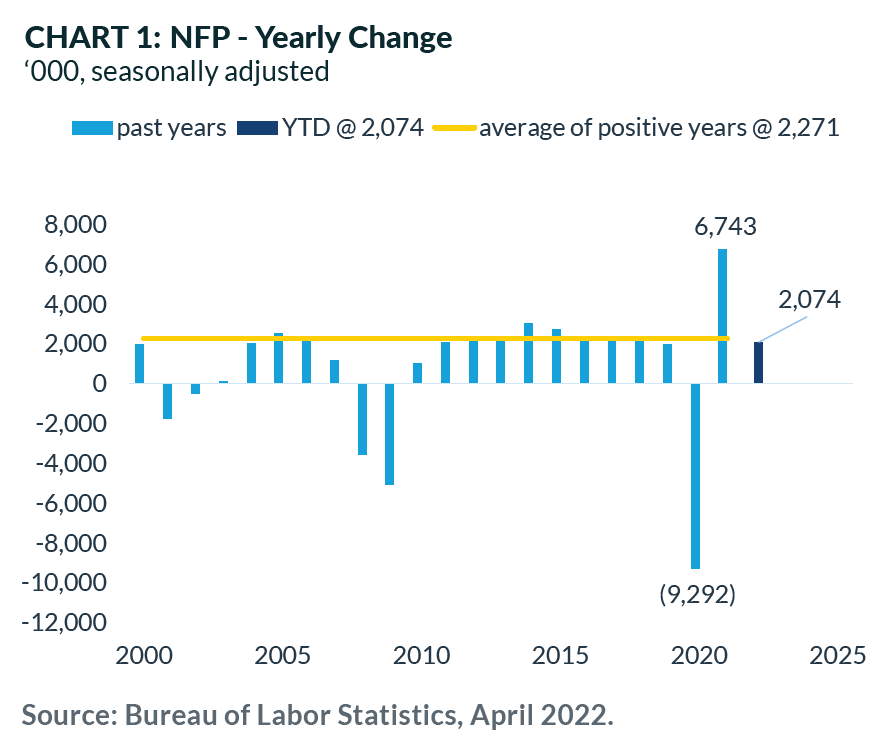 There are now 11.5 million job openings, which is a record. That is about twice as many as the number of people looking for a job, which is 6.0 million (chart 2). 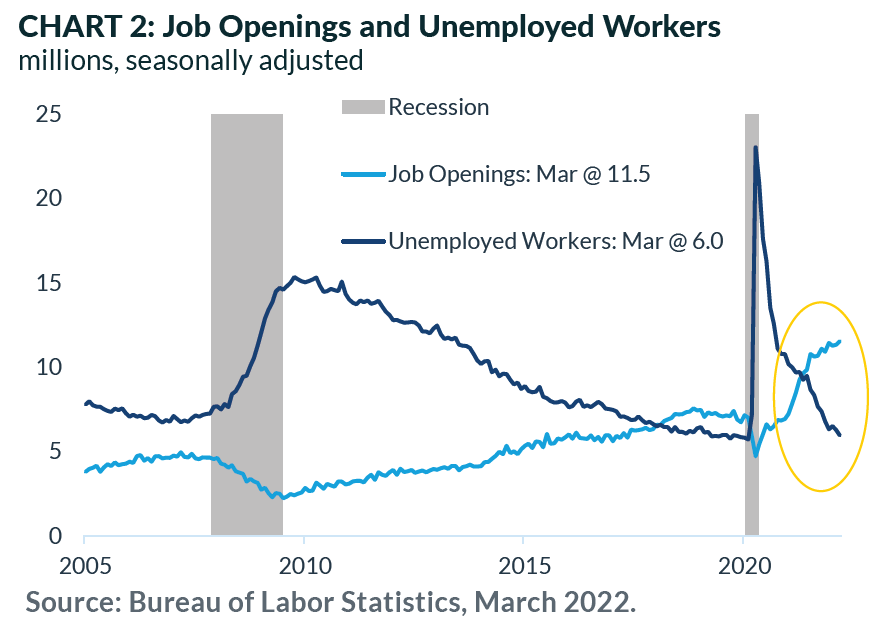 The number of people quitting jobs, presumably for another position that pays more, is also at a record high (chart 3). Layoffs are at low levels as companies do not want to let workers go for fear that they may not find a replacement when demand picks up. And finally, a recent survey by the National Federation of Independent Business finds that firms have never had such a tough time finding workers.

This increased demand for workers is coming at a time when there is a lack of qualified candidates, which is putting upward pressure on wages. This is a concern for the Fed as it is trying to battle the elevated level of inflation. There has been some good news on the inflation front. The yearly change probably peaked last month, and inflationary pressures are changing. At the beginning of the pandemic, there were many price spikes due to shortages that drove up overall inflation. 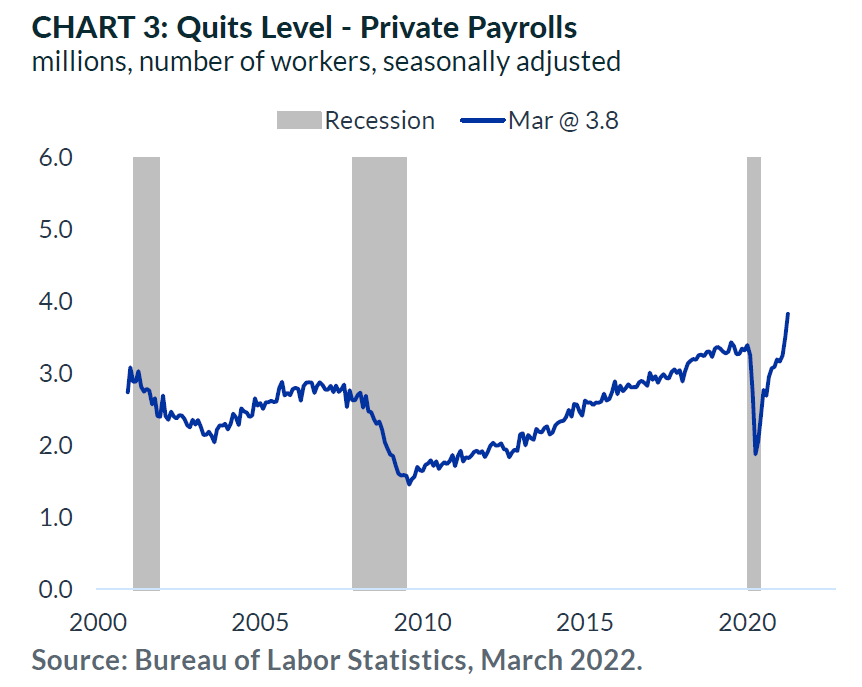 Some of those prices are stabilizing as supply chain problems are slowly resolving themselves, and consumer shopping demand is moving away from durable goods purchases and focusing more on services, like travel and dining out. As a result, inflation for durable goods is beginning to trend downward; the three month rate of change has declined significantly in the past few months (chart 4).

But that is not enough to bring overall inflation down toward the Fed’s goal of 2.0%. The Fed needs to raise interest rates enough to slow the pace of overall demand. The Fed has its work cut out for itself. It needs to bring down inflation by reducing the amount of monetary stimulus to moderate demand, which should slow down the pace of wage gains. Thus, the Fed is taking a double-barreled approach to reducing its stimulus by raising short-term interest rates and quickly reducing the size of its bond portfolio. At its recent meeting, participants raised the funds rate by 50 basis points and are making plans to raise them another 50 bps at the upcoming meetings in June and July. They will also allow bonds to mature out of the portfolio without reinvestment, at a pace about twice as fast as the last time. 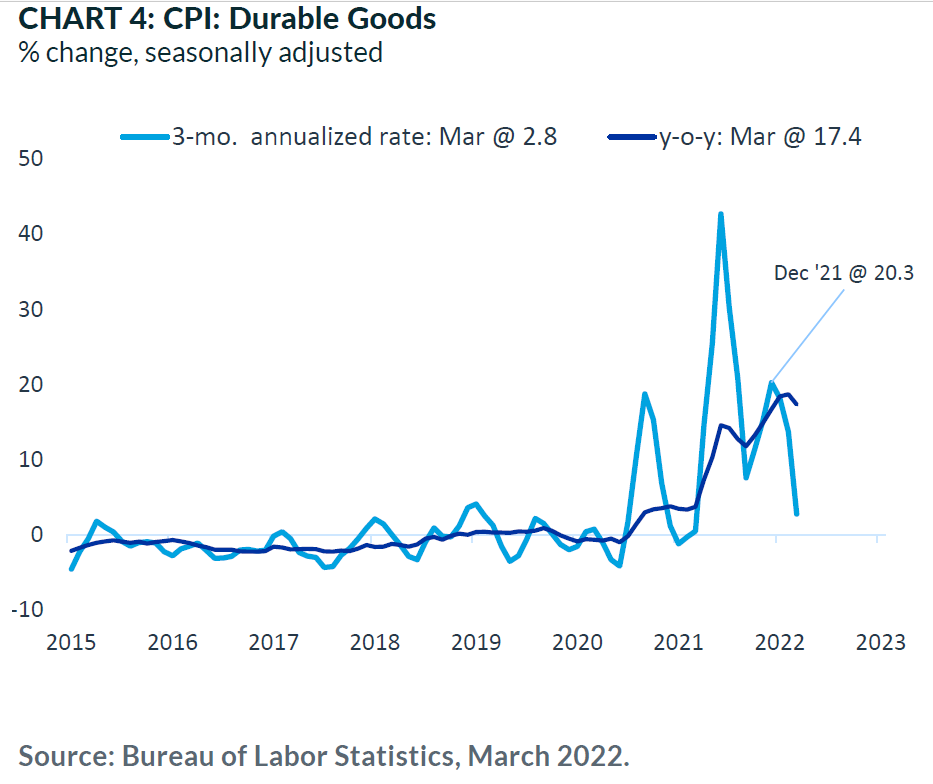 Markets have continued to correct as investors grapple with the potential impacts of Fed tightening and higher inflation on the economy, corporate profits and valuations, in addition to heightened uncertainty around the global outlook. Although we still believe positive fundamentals will provide broader support to US stocks over time, we also think we’re headed for the later stages of the economic cycle, which is historically marked by more modest returns and higher volatility.

Payroll growth remains robust. With higher wages, the number of people looking for jobs is increasing. 1

The Fed has moved more hawkish on inflation, and it is hinting at a 50 bp hike in the federal funds rate at the next two meetings.2

A combination of higher home prices and rising mortgage rates has caused mortgage payments to move up about 40% in the past year.3

The pace of growth in consumer spending remains robust, increasing slightly in Q1 from 2021 Q4’s growth.4

Inflation has peaked. But it will probably be a few years before it gets back to the Fed’s target rate of 2.0%.1

Most job offers are being filled in the service sector as businesses prepare for a post-omicron surge in travel and dining.1