Recent data has shown mounting evidence that the pace of economic growth is continuing to moderate. The final sales numbers from the GDP report, which takes out the volatile components and shows the underlying trend in GDP (it measures the sum of personal consumption and private fixed investment) is slowing (chart 1). 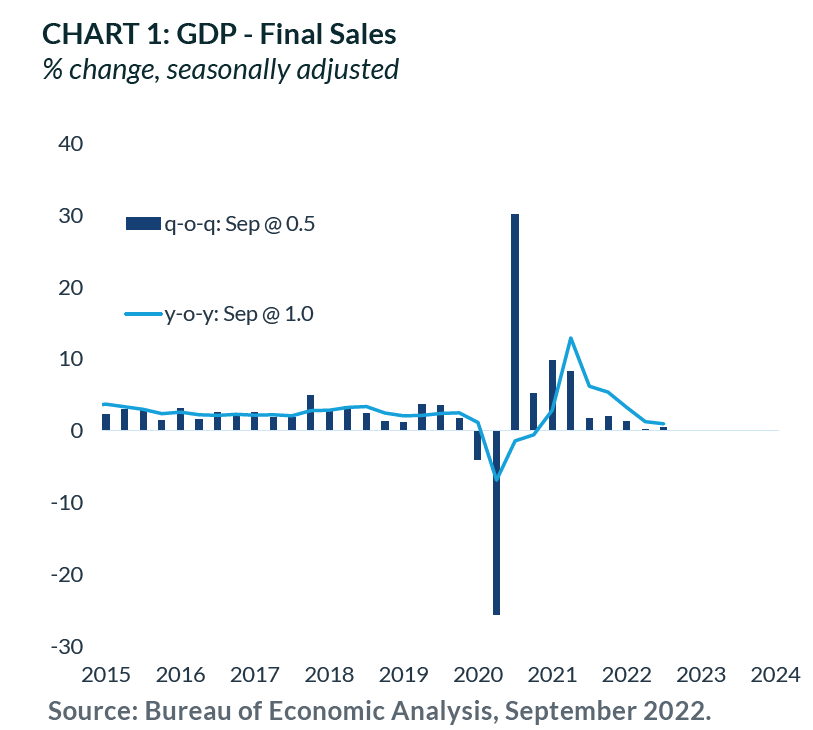 At 0.5% quarter over quarter (q-o-q) and 1.0% year over year (y-o-y), it is well below the 2.6% it averaged for the five years before the pandemic. Also, wage gains are starting to moderate. The most prominent measurement is the quarterly employment cost index, which appears to have turned a corner. This is consistent with other monthly wage data that has been released in this past quarter. Add on to that inflationary pressures, and real disposable income has moved well below the trend it was on prior to the pandemic (chart 2). 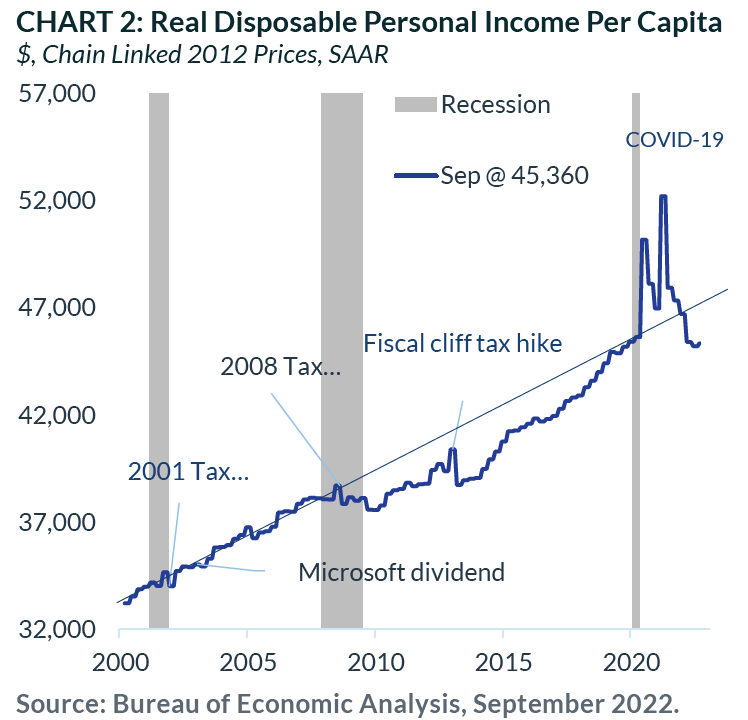 This is the driving force behind the slowdown in consumption. That said, the slower growth in consumption is being partially propped up by a drawing down of the large savings that was accumulated over the past few years and households are running larger credit card balances. Fortunately, with the strength of household balance sheets, household leverage is still below the pre-pandemic rate (chart 3). 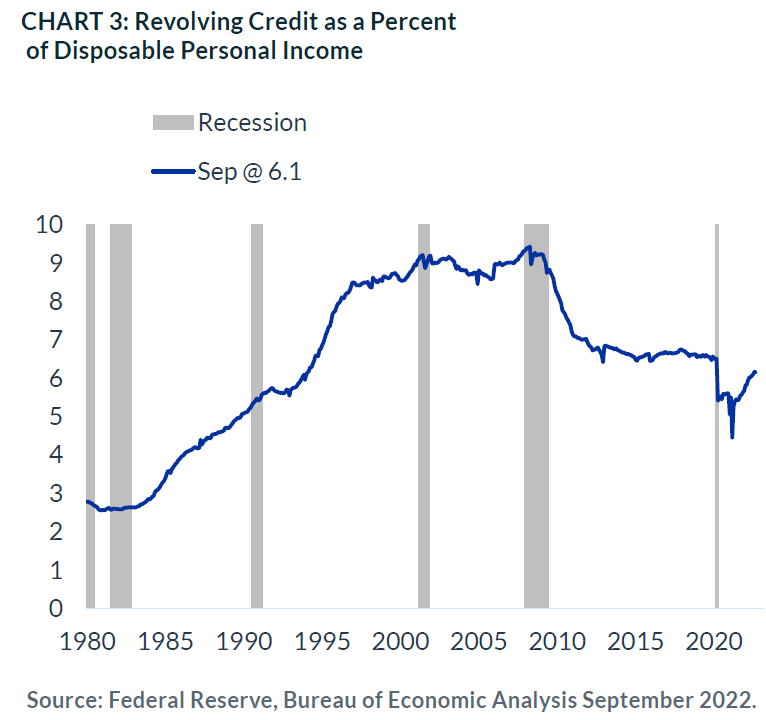 But no matter how you look at it, dipping into savings and increasing debt to maintain spending is not sustainable, especially if wage gains are slowing. So, we can expect the slowdown in consumer spending to continue.

The economic slowdown has the market thinking about when the Fed will stop raising interest rates– recently, the Bank of Canada and the European Central Bank laid the groundwork for stepping down the pace of rate hikes. But the Fed is not on that same path toward a “Dovish Pivot.” Although it plans on smaller interest rate hikes (it did four 75 basis point hikes since June), Powell has stated that the Fed may have to increase the terminal rate higher than it announced back in September (4.6%). This is because inflation is running too hot for the Fed. The Core-PCE price deflator, which is dubbed the “Teacher’s Pet” of inflation releases, since it the one the Fed focuses on, has not shown a significant decline and is well above the Fed’s target inflation level of 2.0% (chart 4). 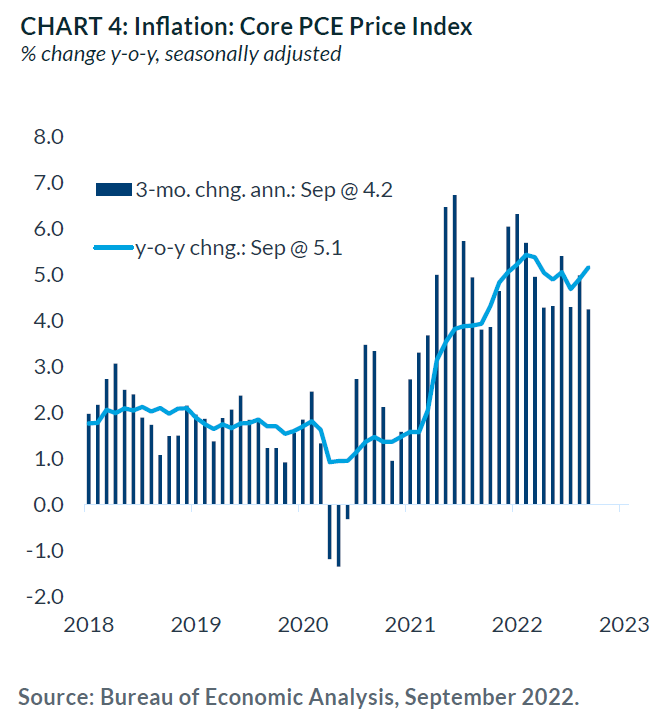 Markets have rebounded strongly to start the 4th quarter but remain volatile as investors continue to grapple with a host of uncertainties, including midterm election results, declining earnings expectations and signs of cooling inflation vs. signals that the Fed will keep interest rates higher for longer. It’s important to remember that rallies and swings in sentiment are a common feature of bear markets. Although October’s better-than-expected CPI report is encouraging, a pattern of lower inflation readings likely still needs to be established for equities to mount a sustainable rebound.

Demand for workers is slowing. The number of workers added to the payroll has been declining since last winter, and wage gains are not as strong.1

The Fed plans to start reducing the size of future interest rate increases, but at the same time, it announced the possible need to raise interest rates higher than previously thought.2

With mortgage rates above 7.0%, many homeowners are choosing to remodel their homes instead of moving, to keep their lower-rate mortgage.3

The USD has rallied almost 20% in the past year due to the high level of interest rates and the U.S. being the premier safe haven.4

A long-term disinflationary trend appears to be underway, with CPI falling to 7.7% from a peak of 9.1% back in June, marking the first time since February that the annual increase is below 8.0%.5

After falling 135 cents this summer, gasoline prices are starting to increase due to fears of a reduced oil supply from OPEC+.6

Is the labor market starting to slow?