The Bottom Line: The Economy Is Growing but So Is the Risk of a Recession

The pace of economic growth has been slowing this year. Policymakers are telling the same hawkish story: The Fed will do what it takes to get inflation down even if it triggers a recession. That is not much of a surprise since 2021 had the fastest yearly pace of growth in about 40 years (chart 1), and many of the tailwinds that supported that growth (federal government stimulus, low-interest rates that allowed for refinancing of debt, etc.) are no longer available. 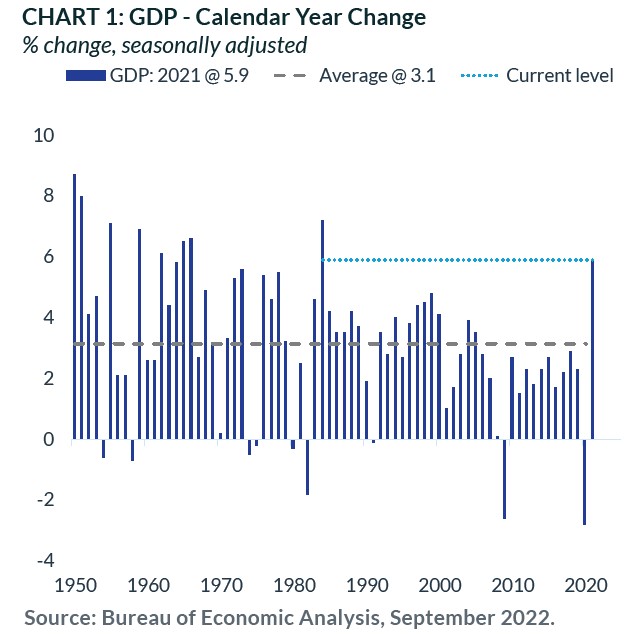 Added to that are the higher levels of inflation that have taken away purchasing power, and the Fed, which has been aggressively raising interest rates to discourage spending to quell inflation. The Fed is front and center of the discussion regarding the future direction of the pace of economic growth. The underlying economy is doing okay once volatility in the data from the pandemic is stripped away. The unemployment rate is falling, wages are increasing and spending continues to grow. The economy is probably growing between 1.0% and 2.0%, slightly below the 2.25% it averaged during the past expansion that lasted ten years. But now entering center stage are Jay Powell and the Federal Reserve Bank. They remain resolved to do what is necessary to bring inflation back to its target rate of 2.0%. In March, they started raising interest rates from the near-zero level. This summer, they pushed the overnight federal funds rate above the neutral level (the hypothetical “Goldilocks rate” that neither stimulates nor constricts economic growth; below it is stimulative, and above it is restrictive). They plan on raising it further into the restrictive territory with rate increases of 75 basis points (bps) in November, 50 bps in December and another 50 bps in 2023 (chart 2). 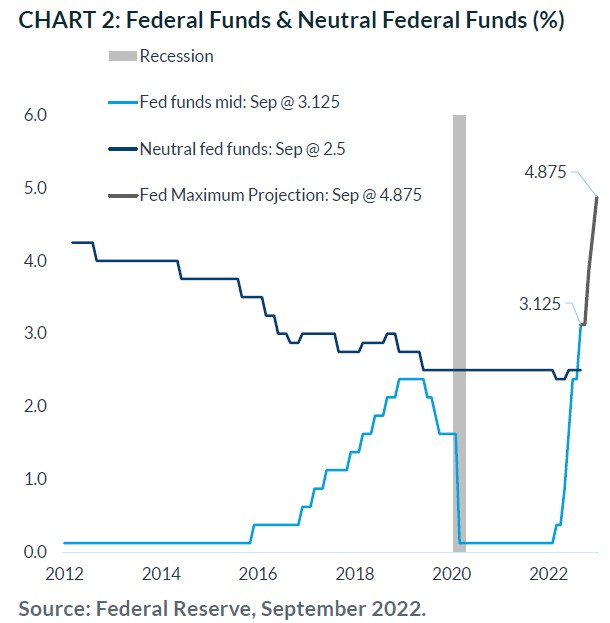 The Fed’s planned pace of tightening is the fastest since 1980 (chart 3), when Paul Volker, then chairman of the Fed, raised interest rates from 10% to 20% to bring down inflation, which peaked at 14.8%. Today’s Fed needs to be aggressive; their actions to date have had minimal impact on inflation. But it is starting to impact behavioral changes, which is the first step in bringing down inflation. 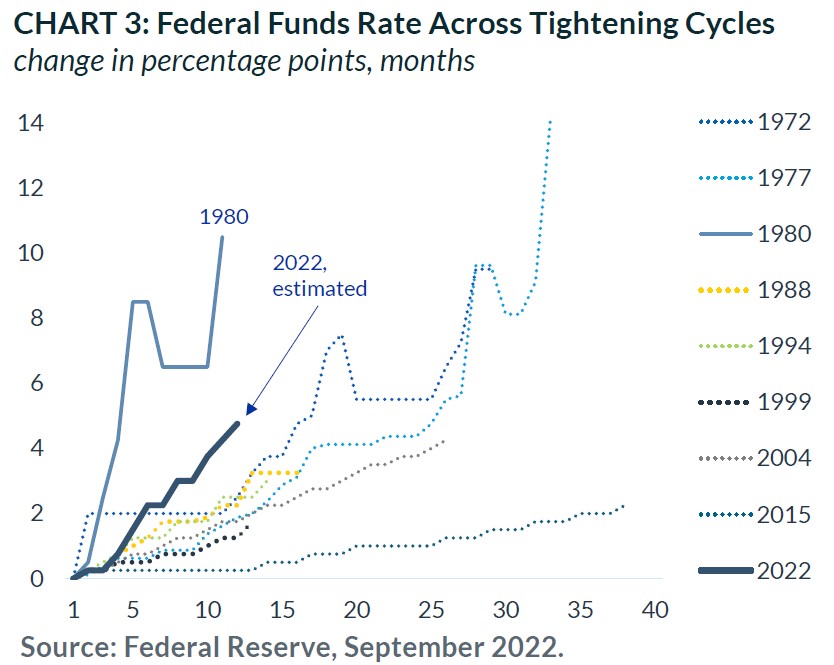 The most interest rate-sensitive sector of the economy is housing. And in time-honored fashion, the housing sector is taking it on the chin, falling victim to the Fed’s actions. Mortgage rates are now above 7%, well above the 3% rate of a year ago. The monthly mortgage cost for a median-priced home has surged to $1,858; two years ago, it was $1,060 (chart 4). The higher interest rates will start moving into other areas of the economy like auto loans (currently at 5.8%, a year ago, they were 3.9%). 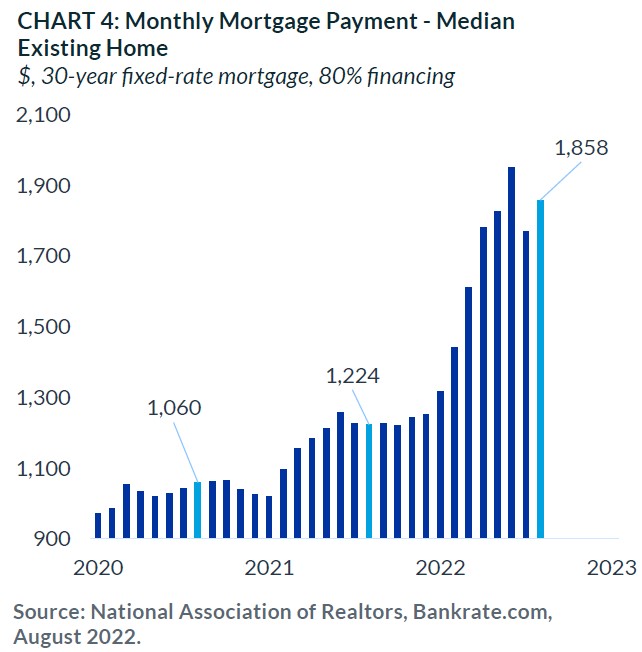 This is the early stage of the Fed’s quest to bring down inflation. How long will it take is the $64,000 question. At some point, households will become fearful of a recession and job cuts. As a result, they will reduce spending and increase savings, slowing the pace of economic growth and reducing the inflation rate. That is what the Fed is hoping for, what they call a soft landing. But if it doesn’t do the trick, the Fed will continue to raise interest rates, which will cause job losses and a recession. How this plays out is still unknown since the trajectories of changes in consumer behavior are nearly impossible to model.

Investors have had little place to hide in 2022, as both equity and fixed income markets simultaneously recorded three consecutive negative quarters for the first time in over four decades. Unfortunately, volatility looks set to continue near term with the persistence and breadth of inflation providing an unwelcomed reminder to markets that rates may stay higher for longer than anticipated. Until a pattern of lower inflation readings is established, equities are likely going to have a hard time mounting a sustainable rebound, and bonds could remain under pressure.

Demand for workers remains strong, but the pace of hiring is slowing. This is what the Fed wants to help reduce the rapid wage growth, which is keeping inflation high.1

Fed policymakers remain diligent in their plans to raise interest rates to help combat high inflation. The Fed expects to hike 125 basis points more before the year is out.2

The red-hot housing market has slowed significantly due to mortgage rates above 7.0%; they were around 3.0% last year.3

Lumber prices have almost returned to their pre-pandemic level. During the recent housing boom, they more than quadrupled in price.4

Pricing pressures remain stubbornly high at 8.2%, which will keep the Fed on track for their planned interest rate increases.5

After falling 135 cents this summer, gasoline prices are starting to increase due to fears of a reduced oil supply from OPEC+.6