Since Federal Reserve Chair Jerome Powell’s speech at Jackson Hole in late August, there has been a full slate of other Fed policymakers telling the same hawkish story: The Fed will do what it takes to get inflation down even if it triggers a recession. The Fed’s tool is to raise short-term interest rates until inflation falls. So the market question is, how much Fed action is needed to slow the economy enough to drop inflationary pressures? More importantly, how steep of a trajectory will the Fed take with interest rate increases, and at what level will they stop? Fortunately for the Fed, there is already a reduction in the pace of economic growth. Consumer spending, which is 70% of gross domestic product (GDP), has slowed to the pre-pandemic pace following the federal stimulus-induced spending binge (chart 1). 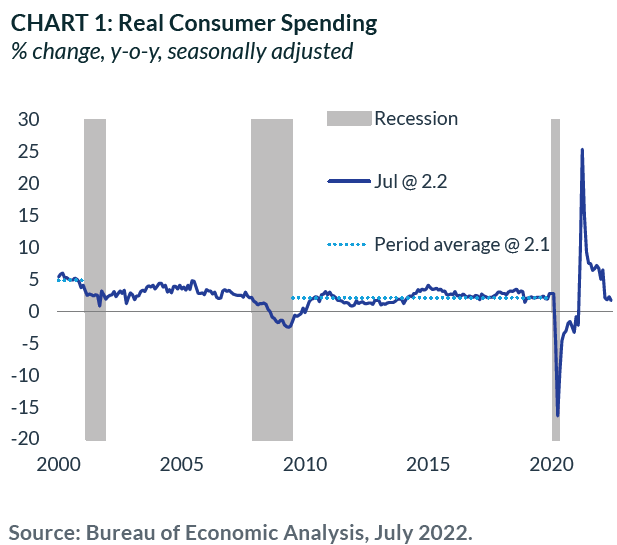 The reduction in spending has been driven by a decline in real disposable income (money a household has to spend or save after paying taxes and adjusting for inflation) and returning to a sustainable trend (chart 2). 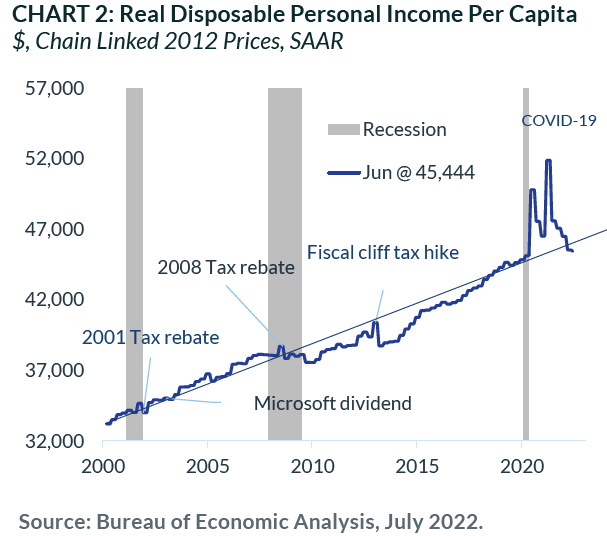 Also, the housing sector is quickly responding to the Fed-induced higher mortgage rates with the rate of growth of home prices and rentals beginning to slow (chart 3). 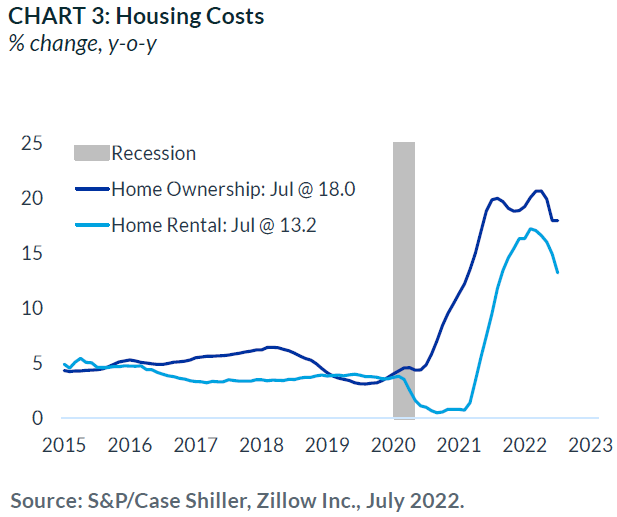 As for inflation, the focus is changing. Throughout most of the recovery, inflationary pressures had come from the purchase of goods, as Americans were stuck at home and bought items to amuse themselves. That surge in demand met with limited supply due to the pandemic, so prices escalated. Now consumers are shifting their spending back toward services, like it was before the pandemic (have you heard anyone boast about their recent purchase of a Peloton?). So, with reduced demand, goods inflation is starting to decline and will probably continue to decline due to price elasticity (chart 4). 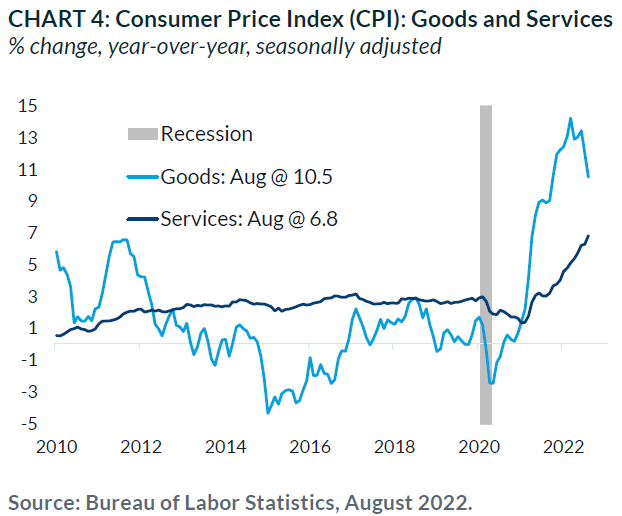 Service inflation is the new concern for the Fed. A significant part of the cost of services is the underlying labor needed to provide the service. With the enormous imbalance between demand for labor and the supply of labor, there are now two jobs available for every person looking for a job. That is the highest the ratio has been, and the long-term average is just six-tenths of a job available for each person looking. This robust demand for labor has caused wages to move up significantly. Economists view wages as price inelastic; they don’t move up and down with demand – they are sticky. That makes it a tough fight for the Fed. They need to raise interest rates high enough to force a slowdown in demand that is severe enough to bring the labor imbalance back into balance. It is still too early to know how high the Fed will push up the federal funds rate to accomplish that goal, but it is safe to assume the will be far more aggressive than its current projections of another 125-150 basis points (bps).

After reversing much of the summer rally, equity markets remain volatile ahead of the Fed’s September 21 policy decision. Bottoming will be a process that could take some time to play out, and continued swings in sentiment are likely while investors gain greater clarity on rate hikes and inflation, and weigh their implications for the economy and corporate profits. We suspect downward earnings revisions in particular could be a catalyst for additional market declines ahead.

Fed policymakers are telling a very hawkish story; the Fed will do what it takes to get inflation down even if it triggers a recession.2

Mortgage rates are about 3.0 percentage points above the rate of a year ago, which has caused demand to decline. Existing home sales have fallen for six straight months.3

After a record deficit of $107 billion in March, it has narrowed sharply to $71 billion, as logistical snags have unraveled and demand for goods has fallen.4

Inflationary pressures are stickier than the Fed and the market previously thought, putting pressure on the Fed to raise interest rates higher.5

After hitting a peak in mid-June, gasoline prices fell 63 cents in July and another 38 cents in August.6