The second P we think is vitally important for successful economic growth is related to the POPULATION dynamics of a country, especially its growth and productivity levels.

The second P we think is vitally important for successful economic growth is related to the POPULATION dynamics of a country, especially its growth and productivity levels. We use six components in this factor. Total population growth is often a leading indicator for growth in the working-age population. This is important because there is a high correlation between growth in individuals in the 20-65 age group and the demand from this cohort for goods and services. With a recent pickup in population growth, the U.S. leads Germany and Europe ex UK. Japan is actually in negative territory in these measures. In looking at growth in the working-age population, the U.S. is the leader, followed by Germany.

The final important aspect in evaluating a country’s population and its impact on the economy is how productive the work force is. Over the last 10 years, productivity in the U.S. has been above that of Europe 73% of the time. In comparisons of the 10-year annualized growth of the working-age population and the 10-year growth in productivity, the U.S. handily beats Germany, many European countries and Japan by a wide margin.

It is also important to assess the savings rate of a country, as that has an influence not only on willingness to spend, which benefits economic activity, but also on the ability to fund overall debt levels from internal sources. In this regard, Europe is a bigger saver than the U.S. Finally, we believe the higher the degree of economic freedom enjoyed by individuals, the greater the propensity for spending and investments, because sentiment and confidence in the future is higher. For this metric, we look at the Economic Freedom Index produced by the Heritage Foundation, which generally reflects better regulations for business and stronger protections of property rights. In this measure, the U.S. is the top-ranked country, Germany second and Europe ex UK fourth.

In our combined rankings of the Population factor, the U.S. is the clear leader of the pack (see table).

See sources at the bottom of the webpage.

A nation’s economic potential is ultimately a product of its labor force’s growth and productivity. The math is simple: more workers plus higher output per worker equals stronger economic growth.

The key here is the slanting lines. In terms of the basic building blocks of economic growth, every advanced economy is heading in the wrong direction, but the U.S. is expected still to enjoy a significant positive growth differential over the next decade. 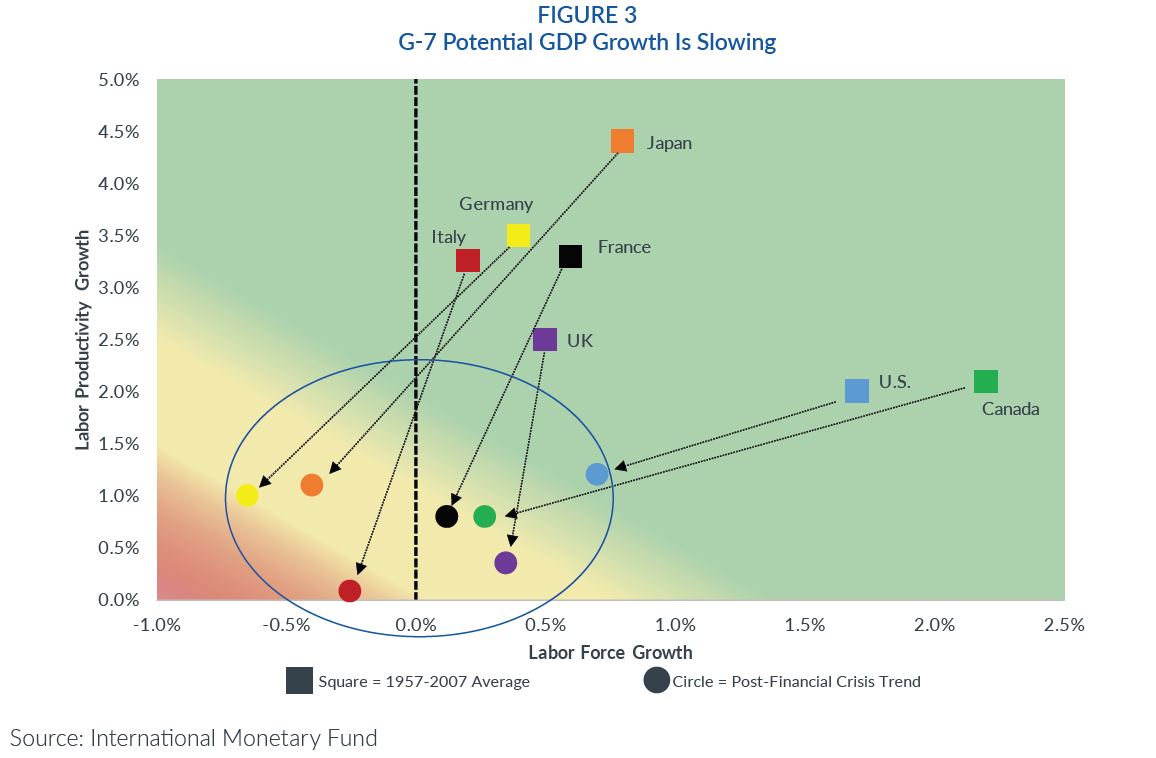 The second P we think is vitally important for successful economic growth is related to the POPULATION dynamics of a country, especially its growth and productivity levels.