Our third P is the POTENTIAL for innovation in industries of high intellectual property. This is important as these industries tend to have higher growth, higher profitability and provide higher wages to their employees.

Our third P is the POTENTIAL for innovation in industries of high intellectual property. This is important because these industries tend to have higher growth, higher profitability and provide higher wages to their employees. To determine this, we look at a number of variables. Cornell University has a Global Innovation Index that includes items such as venture capital deals, online creativity, R&D, patents and knowledge creation. By this measure, the U.S. is first, followed by Germany and Japan. Leadership in spending on R&D as a percentage of GDP varies among countries. Japan and Germany spend more on R&D as a percentage of GDP, but the U.S. has the lead in absolute dollars spent. The U.S. is ahead on patents granted and royalties received by intellectual properties and, when measured by technology sales as a percentage of total worldwide sales, is also the leader(according to Goldman Sachs).

All innovation does not come from government policy and spending. A country’s venture capital community and technology-focused universities, combined with the creative spirit of innovation, are important factors. In venture capital, the U.S. has a 60% market share of the largest 25 firms, and also has more leading universities in technology-related fields. Lastly, we include the Ease of Doing Business Index developed by the World Bank as a measure of determining the ability of great ideas to be translated into business success.

Using all these factors, we believe the U.S. is the undisputed leader, as our combined Potential score illustrates.

In the first three Ps—Policy, Population and Productivity, and Potential for Innovation—the U.S. has a strategic advantage. This is perhaps best illustrated by Figure 4, which shows the strong advantage that the U.S. has on a per capita income basis. This figure shows GDP per capita since 1980, with the U.S. as the baseline level. During early 1990, both Japan and Germany experienced improvements in this metric. The narrowing of the gap proved short-lived, and the U.S. maintains a sizable advantage. 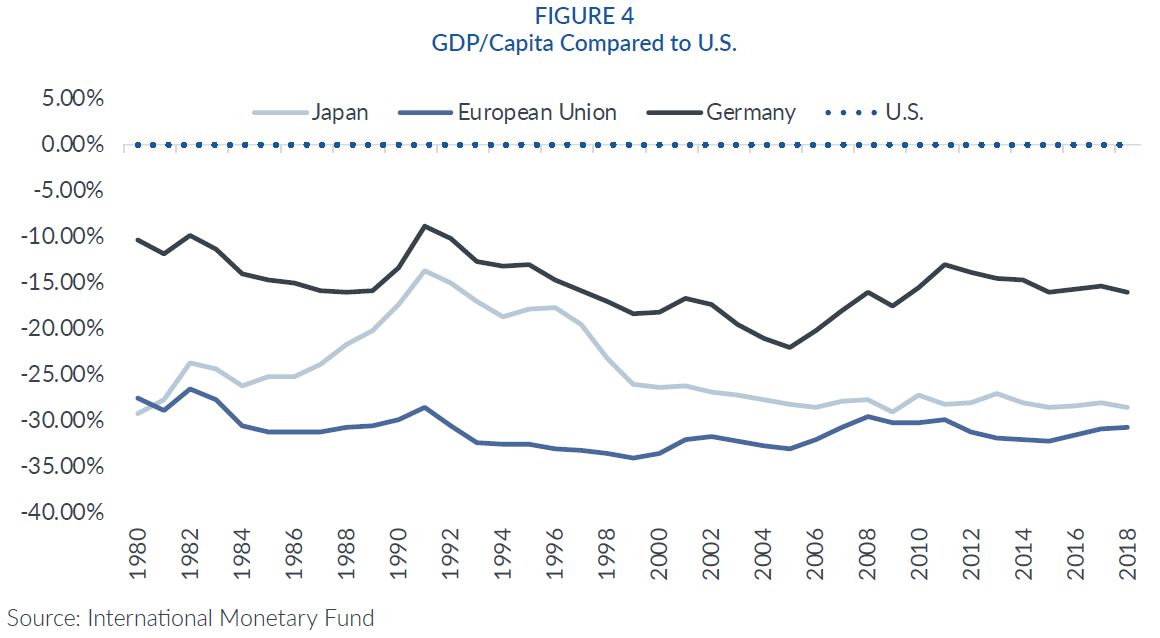 Our third P is the POTENTIAL for innovation in industries of high intellectual property. This is important as these industries tend to have higher growth, higher profitability and provide higher wages to their employees.