October is The Cruelest Month

Historically, most corrections have not become bear markets, which are defined as periods when the market falls by 20% or more.

The market will usually overshoot to the downside, more so than the fundamentals dictate.

Our client portfolios are constructed with volatility in mind and should withstand the correction relatively well due to our high-quality equity allocation and overweight to U.S. large cap stocks.

As Halloween nears, there seems to be a wicked brew roiling the markets. What started as a rate worry turned into a tariff-induced growth worry and has the market thinking that maybe earnings have peaked. We don’t believe this is the case, but we agree that earnings growth will slow to its normal organic rate of about 7%. The tariffs/rate cocktail may cause it to swing below that for some time, but a prolonged earnings recession is not our forecast.

A FEW FACTS REGARDING PULLBACKS

Historically, corrections (declines of between 10 to 20%) are fairly common and relatively short-lived. In fact, between March 2009 (the start of the current bull market) and February 2018, the market has experienced seven such corrections before stocks eventually rallied to new highs.

Bear markets, or more severe declines of 20% or more, are fairly rare in comparison. Just six of the 29 corrections going back the last 50 years have turned into bear markets. 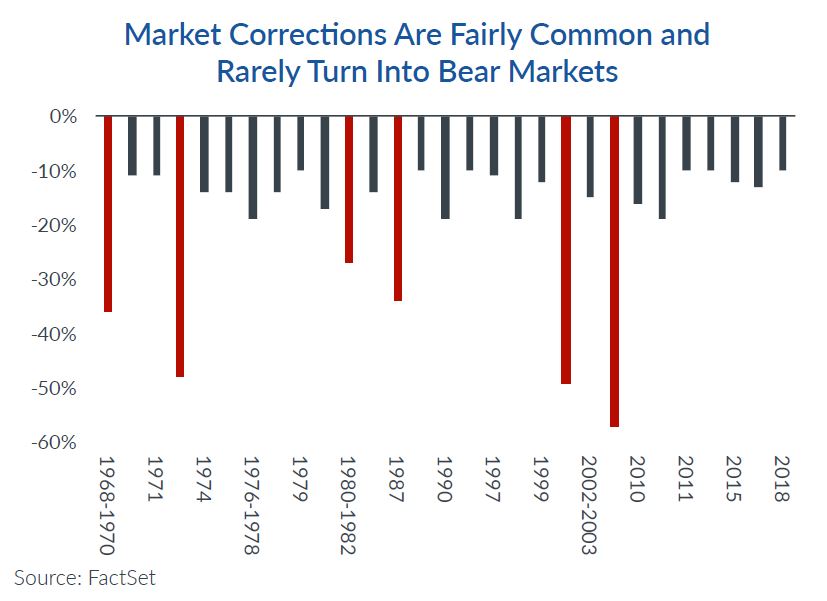 As we expected it might, the market’s recent sell-off has continued to a full-blown correction. Over the past couple of days, the pullback has been more consistent with a bottom, where the selling becomes disorderly and broad based.

The market will usually overshoot to the downside, more so than the fundamentals dictate. By our reckoning, the market is now pricing year-over-year earnings declines,1 which may occur in some sectors. However, we don’t see this occurrence as widespread and long lasting.

As you can see from the chart, we have had several of these corrections during this cycle. We had one earlier this year related to rates, and in 2015, we had a growth scare due to the oil price collapse and the fear that it would cause widespread bankruptcy in our energy complex, resulting in recession. This correction has similar tones, with many corporates seeing “broad based slowing”2 in orders. There has been a tepid pace of economic activity, so much so that just a few months ago the market was concerned about overheating. What a difference two months make!

So, a slowing for a few quarters makes sense and is probably healthy. But the consumer is strong and has a solid financial foundation to spend for the foreseeable future, and that’s ultimately what will keep the economy, and earnings, growing. In other words, this is the pause that refreshes, we think.

As a result, we think the market will find its footing shortly, and hopefully the “trick” will turn into a “treat” as we get to the holiday season. With prices now reflecting recession in many sectors, if that doesn’t come to pass, there is value to be had.

Our client portfolios are constructed with volatility in mind and should withstand the correction relatively well due to our high-quality equity allocation and overweight to U.S. large cap stocks versus mid-small cap and international.

Please reach out if we can be of any assistance.

Historically, most corrections have not become bear markets, which are defined as periods when the market falls by 20% or more.

The market will usually overshoot to the downside, more so than the fundamentals dictate.

Our client portfolios are constructed with volatility in mind and should withstand the correction relatively well due to our high-quality equity allocation and overweight to U.S. large cap stocks.

1The market trades at 14.7x 2018 EPS (ex-FANG) with several cyclical sectors at levels not seen since PMI readings of 46, a recession level. The long-term average for the market is 15x and closer to 16.5x when rates are below 3.5%.

2From the conference calls of a few semiconductor companies. They are usually leading indicators for the broad economy but have little more than 3 months visibility.