Slowing Growth Not As Big a Deal As It Sounds

Raising interest rates will start to get trickier for the Fed as time goes on.

There are more job openings than people looking for jobs.

The economy is maintaining solid momentum.

The nerve-racking anxiety that’s taken hold of U.S. equity markets over the past month might seem oddly untethered from economic reality. After all, the economy has just come off its best consecutive quarters of economic performance since 2005. Consumers are exceptionally confident, unemployment is ultra-low and corporate profits have surged. But, the stock market prefers to look ahead and has a keen ability to sniff out in advance important inflection points in the economy or earnings.

Indeed, there is good reason to believe the recent growth surge, boosted largely by fiscal stimulus, represents the high water mark for the U.S. economy and company profits. Consumers have ramped up their spending in the wake of last year’s tax cuts, but the upswing is likely to fade over time. Research shows that the spending impetus from income-tax cuts tends to be greatest in the first two quarters after they’re enacted, before fading over about eight quarters. Similarly, the stimulus from this year’s $300 billion increase in the federal budget is also likely to fade after fiscal 2019 ends next September. Higher government spending alone has accounted for nearly half of the acceleration in GDP growth we have seen over the past year.

Perhaps the most convincing reason to be skeptical about the sustainability of recent rates of growth is the fact that business participation in the expansion is declining, rather than ramping up. After posting strong growth in the first quarter, business investment has slowed to a 0.4% pace in Q3. Remember, the case for the tax reform was driven by an assumption that it would stoke business investment and productivity, allowing for a more permanent boost to the economy’s potential growth rate. But there are few signs that animal spirits are being rekindled. A recent survey by the National Association for Business Economics found that changes to the tax law have not broadly impacted hiring and investment plans for 81% of the group’s members.

Instead, what has increased markedly is the federal deficit. Due to the combination of lost tax revenue and increased budget spending, the US government is expected to issue more than $1.3 trillion of new debt in 2018, the highest total since the depths of the Great Recession. For now, the boost to the economy from all this deficit financed fiscal stimulus has helped moderate the impact of Fed tightening. But, as the effects of the stimulus begin to fade, larger deficits can be expected to put further upward pressure on interest rates, crowding out private investment and consumer demand. In fact, evidence of this is already showing in rate-sensitive sectors of the economy such as housing and autos.

Still, all of this really isn’t as concerning as it might sound. Nor is it unexpected. We were not alone earlier this year when we argued that any boost to growth, particularly coming this late in the cycle, would likely prove temporary and that economic conditions were strong enough to not need further government intervention. Indeed, the economy remains on solid footing fundamentally and, while we expect a cooling of GDP to around a 2.5% rate next year as stimulus benefits fade, that’s still comfortably above the economy’s potential rate, and supportive of solid corporate profit growth even as benefits from tax cuts roll-off.

In this context, the recent pullback in stock prices from record highs has the look of a healthy correction. Markets may have a good reputation for sniffing out inflection points, but they also have a reputation for overreacting, more so than the fundamentals dictate. It may take some time, but we expect investors will readjust expectations for still healthy, albeit slower, fundamentals over the coming months, allowing the long-running bull market to continue. 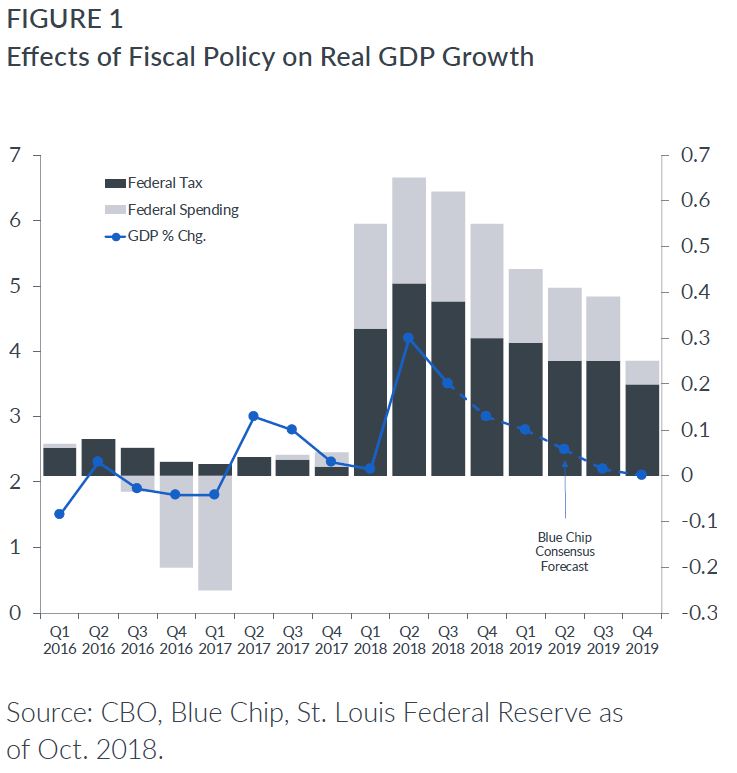 The Fed is very pleased with the pace of economic growth, the relatively stable inflation level (which remains around their target level of 2.0%), and their planned future interest rate increases. They expect to hike rates five more times—once in December, three times in 2019, and once in 2020.

This tightening of monetary policy has been a relatively calm transformation so far. But it will start to get trickier for the Fed as time goes on. When the Fed began raising interest rates back in December 2015, the median federal funds rate was just 0.125%. Each 25-basis-point hike the Fed made in those early days had little impact on the economy and consumers.

Now, the federal funds rate is getting close to the “neutral rate” (see Figure 2). This is the level of interest that is neither stimulative nor restrictive. This rate is not written in stone; rather, it is a theoretical number calculated by a complex model developed by the Federal Reserve Bank of San Francisco. Now that we are getting close to that level, the risk of a policy mistake is increasing. We will start to see the different personalities of the FOMC (hawks or doves) arguing their points about future changes. This may cause more uncertainty and thus, some volatility in the market as they try to forecast what the Fed will do. 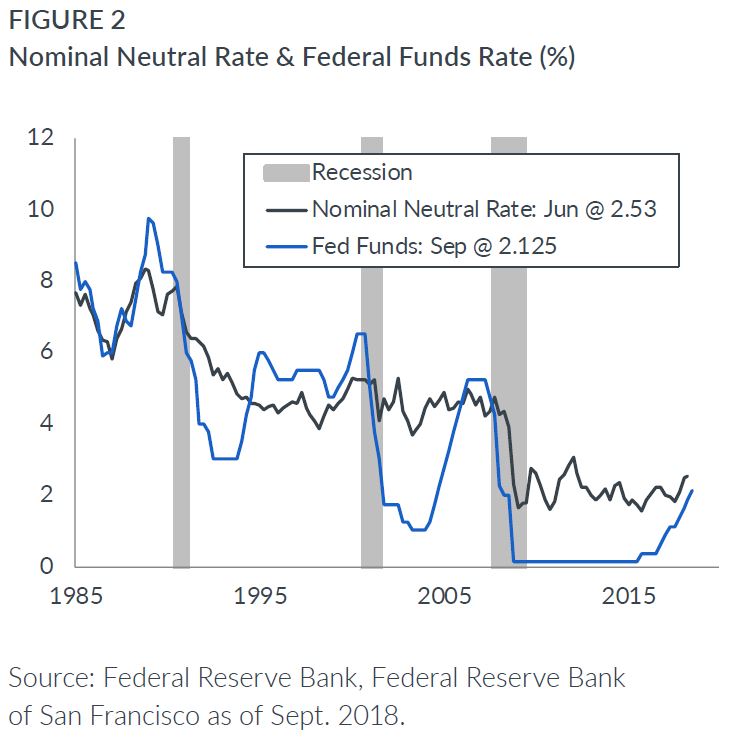 The pace of hiring remains strong, and the unemployment rate is down to just 3.7%, the lowest level since 1969. It has now been at or below 4.0% for six months. Looking back, the only other periods when the unemployment rate was at or below 4.0% was in the early 1950s, when much of the workforce was overseas due to the Korean War, and in the late 1960s, when many were overseas in Vietnam (see Figure 3). Based on that comparison, this low level of unemployment is an extraordinary feat.

For the past six months, the Labor Department has reported more job openings than people looking for jobs. This, combined with many other strong economic fundamentals, has the Fed and many others believing that the unemployment rate will continue to fall. The Fed projects the year-end unemployment rate will be 3.7%, and they expect it to fall further in 2019, ending the year at 3.5%. 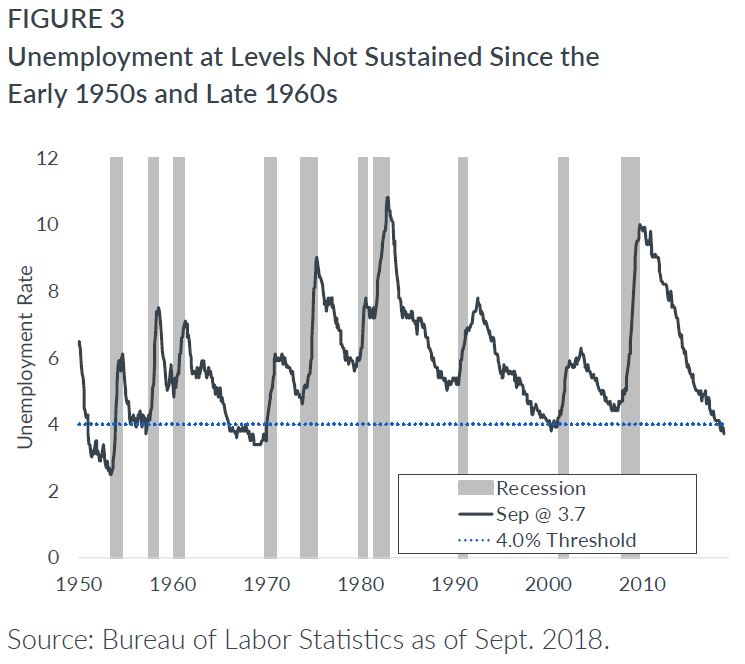 Price pressures lost some momentum these past couple of months as modest reports have helped to keep inflation (core-PCE) around 2.0%, following several months of stronger gains. Since March, inflation has been in a very stable range of 1.9%-2.0%. For more than six years, inflation had been below the Fed’s target. Years of zero interest rates helped set the stage for inflation to return back to its target. The recent and expected interest rate hikes from the Fed should help keep inflation from getting out of hand.

Looking forward, lower oil prices may offset the recently enacted tariffs. The rapid drop in prices has surprised many (see Figure 4). Early in this year, oil prices rallied 26.5% when they reached a peak of $76.41/barrel back in early October. Since then, they have fallen $10.83 dollars per barrel to $65.31.

Although oil prices are generally volatile, they are especially volatile now. The oil market is trying to understand and manage the supply/demand relationship. Demand had been increasing in the past few years as the global economy experienced synchronized growth. But this year, in part due to the various trade tussles, growth in some areas has been slowing while other areas, like the United States, have been improving, due in part to a boost in fiscal stimulus. Add to that the administration’s plan to withdraw from the Iran nuclear deal and the intrigue following the macabre death of Jamal Khashoggi, and there may be more uncertainty and thus, price volatility that will affect inflation. 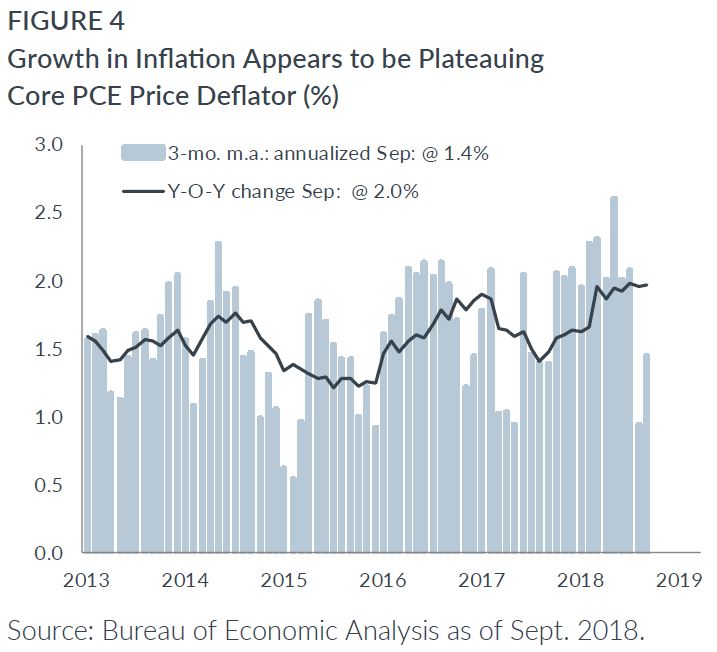 Economic growth in Q3 came in stronger than expected, confirming that the economy is maintaining solid momentum. Q3 GDP growth was 3.5%; this is on top of the 4.2% growth rate in Q2. It marks one of the best six-month stretches in the past decade.

However, City National Rochdale, the Fed, and economists surveyed by the Wall Street Journal expect growth to slow from this above-trend pace and return to the trend level of 2.0% to 2.5% that we have seen since the recession ended back in 2009. City National Rochdale, the Fed and a majority of economists do not expect a recession in the coming years.

Growth this year has been propelled by the federal stimulus package, which increased government spending and cut taxes. This in turn has led to increased consumption. Both of those sectors have been strong (see Figure 5), but are expected to slow as the stimulus wears off. Net exports have been volatile due to the various trade tussles.

Some of the expected slowdown is already showing up in interest-rate-sensitive sectors. Auto sales have been slowing for about a year, and home-building has contracted in five of the past six quarters (the one quarter it was up was following hurricanes). Also, the dollar has been rallying this year, making exports less competitive. 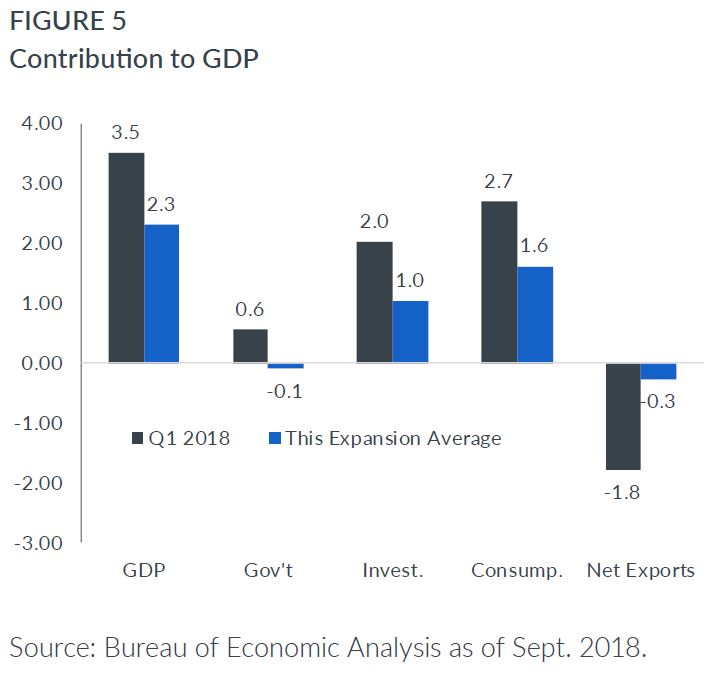 Raising interest rates will start to get trickier for the Fed as time goes on.

There are more job openings than people looking for jobs.

The economy is maintaining solid momentum.