On Politics and the Market

What matters most for stock prices is corporate profits, and the earnings outlook remains strong.

The stock market tends to do well during periods of divided government because gridlock does not disrupt the status quo.

Today’s political environment is anything but ordinary. Still, markets have been remarkably resilient in the face of hyperpartisan rancor, divisive midterm election races, political investigations, and now renewed threats of another government shutdown. The U.S. equity markets have climbed the “wall of worry” and sit poised for continued gains. This isn’t to say investors should be ambivalent about news coming out of Washington. But it’s important to look past the political noise to see whether or not changing policy tides can affect the fundamentals that ultimately drive the economy and financial markets.

From a historical perspective, it’s interesting to note that midterm election years have been on average the worst in the presidential cycle, enduring extended corrections in Q2 and Q3 before rallying strongly over the next three quarters (see Figure 1). In fact, the S&P 500 has been higher one year after every midterm election since 1946. 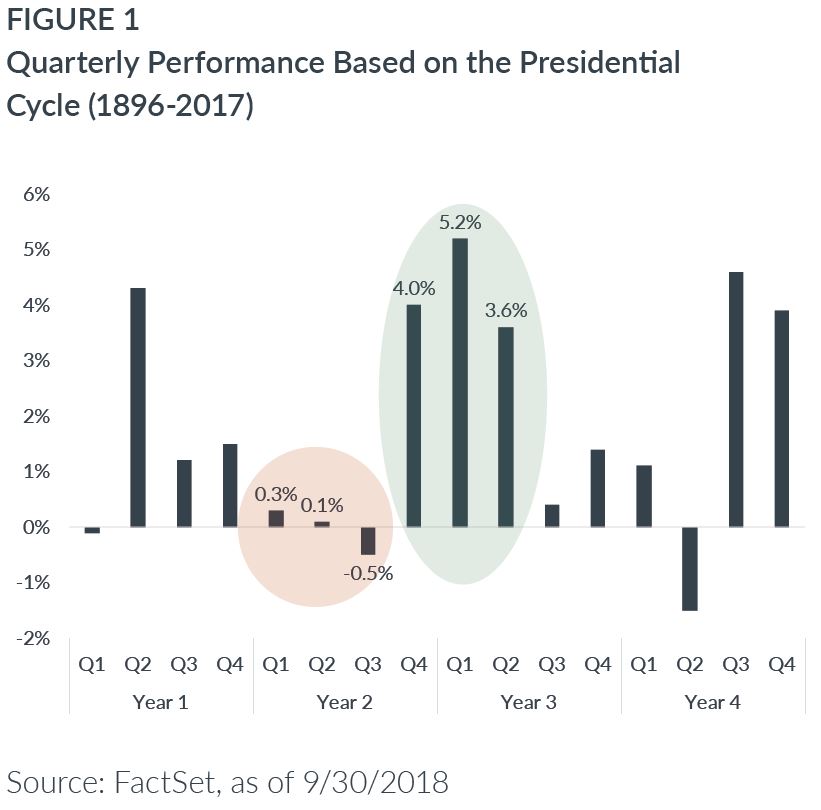 The economic rationale behind this is that the government has traditionally tended to remove stimulus during the second year of an administration before boosting the economy with pro-growth policies ahead of the next presidential election. Quite the opposite is true today. Government stimulus has turned sharply expansionary this year, even as the Fed continues its path of rate hikes, thanks to recent tax cuts and a sizeable increase in federal spending (see Figure 2). 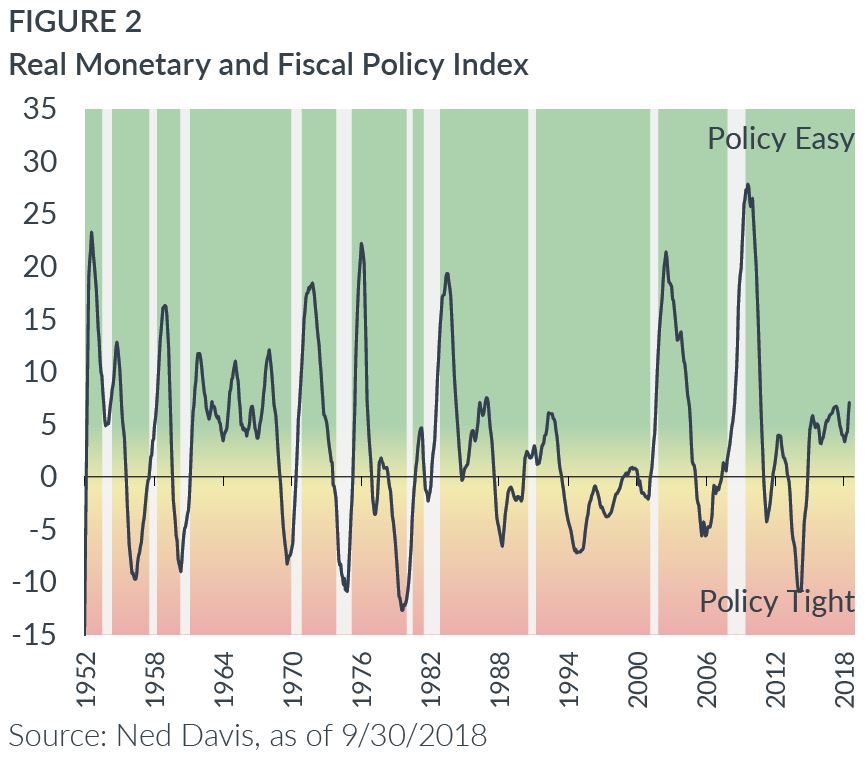 For the most part, U.S. markets and the economy have thrived over the past two years under a unified Republican government. As investors, we argue that the relevant question regarding the upcoming midterm elections is: Will the outcome allow the current policy agenda to continue, stall it, or signal its coming reversal? After all, going by past voting patterns and recent polling data, there is a strong chance that political control of at least the House will flip this year.

Unsurprisingly, the stock market tends to do well during periods of divided government because gridlock does not disrupt the status quo (see Figure 3). For developed economies, what matters most is policy risk. And in that analysis, we suspect that regardless of what happens on Election Day, most of the potential policy changes in the realm of possibility will not alter the fiscal headwinds and tailwinds currently in place. 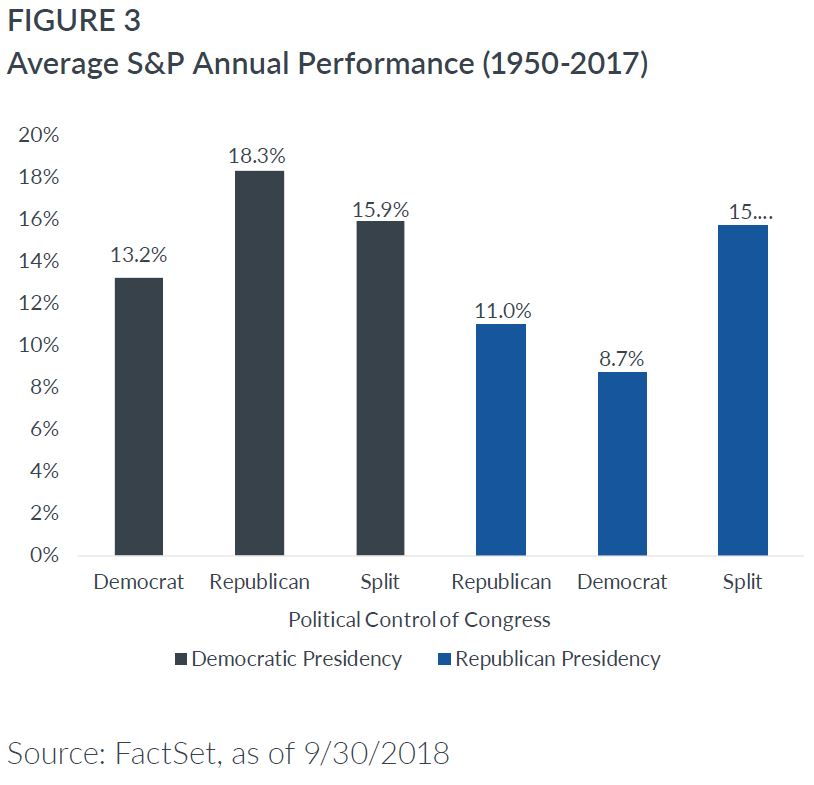 Even if Republicans were to lose both chambers of Congress, the tax cuts that have created quite a windfall for corporations aren’t going anywhere, and neither is the deregulation push. Trade dynamics would also largely stay the same because authority over tariffs has gradually migrated to the executive branch over the course of past 50 years. Meanwhile, there appears to be little appetite on either side of the political aisle to reign in government spending or tackle the ever-growing mountain of federal debt.

Similarly, the prospect of impeachment proceedings against President Trump from a new Democrat-controlled Congress likely wouldn’t translate into the type of policy changes that could affect corporate profits and the economy. Constitutional crises are never good for the stock market, but history shows that investors in the long run focus on fundamentals. Although the S&P 500 fell about 50% during the heart of the Watergate affair, this weakness reflected much more than domestic politics. The country was in the middle of a recession, hit by an oil embargo and spiking inflation. In contrast, with U.S. economic growth at well over 4%, strong earnings, and moderate inflation, President Clinton’s troubles did little to blunt the 1990s bull market.

It’s understandable when we hear investors express anxiety over today’s political environment. By many measures, partisan rancor has reached a new level of division ever since the financial crisis. And with the 24-hour news cycle compounding and amplifying this trend, it can be hard at times to tune out the daily political noise and focus on what really matters. Still, in our eyes, solid economic growth, healthy corporate profits, reasonable valuations, moderate inflation, and low interest rates make a pretty compelling case to remain invested in U.S. equities. Negative headlines might move markets temporarily and raise volatility, but over time, the stock market has shown that it will follow strong fundamentals higher (see Figure 4). As long as the outlook remains positive, we suspect the market will continue to do so. 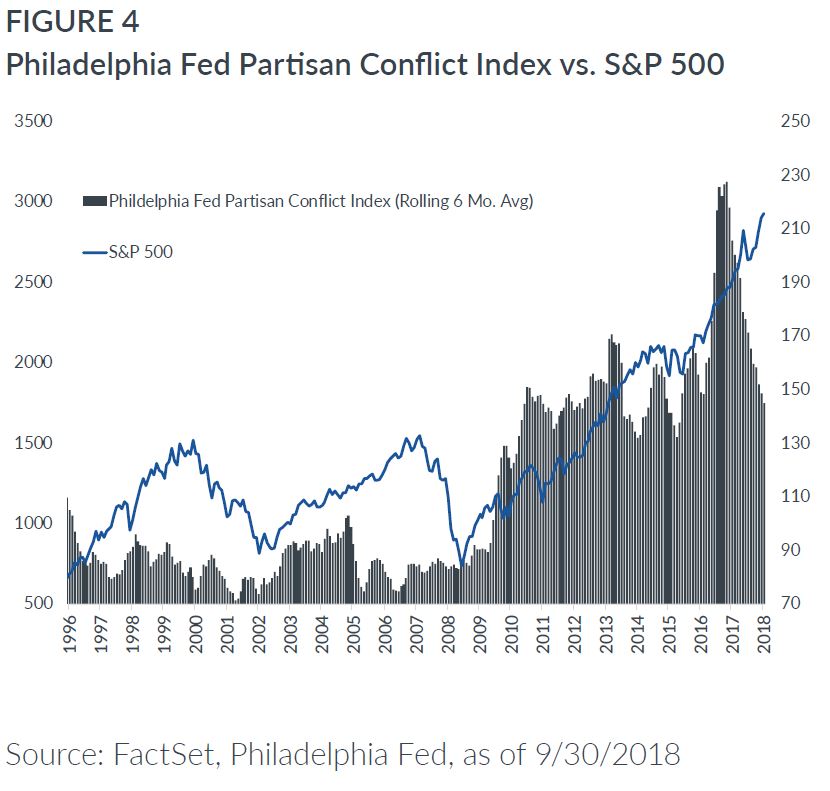 What matters most for stock prices is corporate profits, and the earnings outlook remains strong.

The stock market tends to do well during periods of divided government because gridlock does not disrupt the status quo.

The Partisan Conflict Index tracks the degree of political disagreement among U.S. politicians at the federal level by measuring the frequency of newspaper articles reporting disagreement in a given month. Higher index values indicate greater conflict among political parties, Congress, and the president.