The reason why inflation has been low has more to do with issues beyond the Fed’s control.

The Fed is facing an uphill battle, as inflation has been falling since the 1980s.

Petroleum prices have rallied 56% from their recent low price in late December.

Weighed down by trade tensions, policy uncertainty and less favorable financial conditions, the global economy has continued to struggle in the first few months of 2019. However, many of the factors that have depressed growth are lifting, and we are starting to see hints of “green shoots” (or at least stabilization) in recent data. For the first time in nearly a year, prospects, while still subdued and increasingly divergent, are looking less gloomy.

The biggest change has been in policy. A year ago, confidence in the global economy led global policymakers to move too far and too fast, ultimately hurting growth. The pendulum is now swinging the other way. Central banks are no longer actively tightening policy and even appear to be leaning toward easier policies, focusing on stimulating demand rather than nonexistent inflation pressures. Governmental budgets are also turning more stimulative. As a result, last year’s global stock selloff has largely reversed, and other measures of financial market stress are relaxing.

The global slowdown has been far from uniform, and the U.S. economy has proven particularly resilient. Massive fiscal stimulus has helped deliver several consecutive quarters of above-trend growth without overheating the economy. By most measures, the U.S. expansion is now in the later stages of this business cycle. Yet, even as it approaches a record 10th year, it continues to show few signs of excess and recession risk remains low. Job growth remains strong, confidence high and household balance sheets healthy.

This stands in sharp contrast to what we are seeing in other developed economies. Indeed, much of the weakness in the global outlook can be attributed to conditions in Europe (see Figure 1). Last month, the International Monetary Fund (IMF) slashed its outlook for the euro area to 1.3%, down 0.3% from three months ago. Although Europe has shown recent indications of stabilization, many formidable headwinds remain. Political uncertainty and social discontent continue to weaken business and consumer confidence and challenge policymakers’ ability to boost growth. 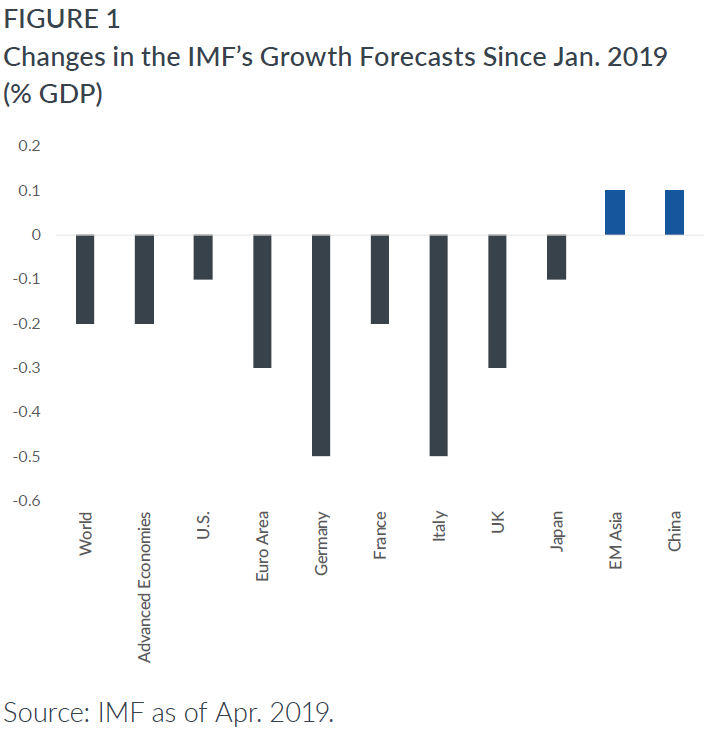 More encouraging have been recent developments in emerging economies, particularly China. The slowdown in global growth, despite extraordinary policy support in the developed world, is a good reminder of China’s importance to the global cycle. Last year, Beijing’s deleveraging campaign weighed down business and property investment. Along with the negative fallout from trade tensions with the U.S., this contributed to a slump in global trade, which in turn dragged down business confidence and investment around the world, particularly in export-oriented European and Asian economies.

The Chinese government’s U-turn back to stimulus, though still modest, already seems to be bearing fruit, both in consumer and small business owner sentiment and in economic data such as retail sales and industrial output (see Figure 2). Meanwhile, U.S.-China negotiations have offered encouragement that a more damaging trade war will be avoided. The effect has been contagious. Policy across the region is turning more supportive, and other emerging Asian economies, especially manufacturing exporters in China’s neighborhood, are beginning to show more positive trends, most notably in the pickup of export orders. 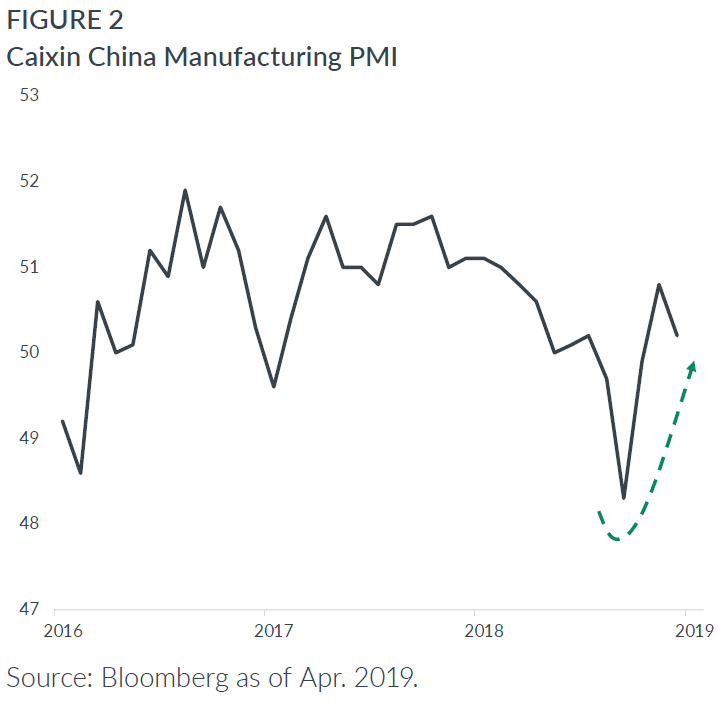 Of course, a lot can still go wrong. After priming the fiscal pump for two years, the U.S. economy is expected to slowly succumb to the gravitational pull toward potential growth. Ongoing fiscal injections may occur, but politicians will be hard pressed to deliver the scale and scope of past measures due to ballooning deficit and debt levels. A big test of Congress’s resolve will come later this year, when a new budget deal must be reached. Failure to avoid automatic spending cuts —sequestration — could shave 0.5% from GDP.

We’ve also been hearing about a potential China-U.S. trade deal for months now, but nothing has come to fruition yet. A breakdown in negotiations and ensuing tariff implications would be very negative for a global economy still struggling with reduced trade and investment flows. Even if an agreement comes together in short order, this would not remove trade risks altogether. The U.S. administration looks to have its sights set on Europe and Japan next, where the threat of punitive auto tariffs continues to dangle. Any goodwill to global sentiment from a China-U.S. deal could be quickly undone by a souring of relationships with America’s other major trading partners.

Taking all this into consideration, we think we have good reason to be cautiously optimistic that the slowdown in the global economy may be bottoming. Risks remain and uncertainty will continue to hang over the outlook in the near term. The business cycle is also showing signs of aging and many long-standing structural trends will limit the potential recovery. But, as the calendar turns to spring, signs of regrowth may be finally emerging.

Some believe that the Fed needs to lower interest rates to help spur inflation. Since 2012, when the Fed started targeting inflation at 2.0%, inflation has remained below that level. We do not believe that lower interest rates will boost inflation. For the better part of the past 10 years, the federal funds rate has been below the inflation rate. That did not help put upward pressure on inflation (see Figure 3). The reason why inflation has been low, we believe, has more to do with issues beyond the Fed’s control. Massive global shifts (e.g., globalization, the Amazon effect, less unionization) have given consumers more power over suppliers. The Fed’s monetary policy will have very little impact on those issues. 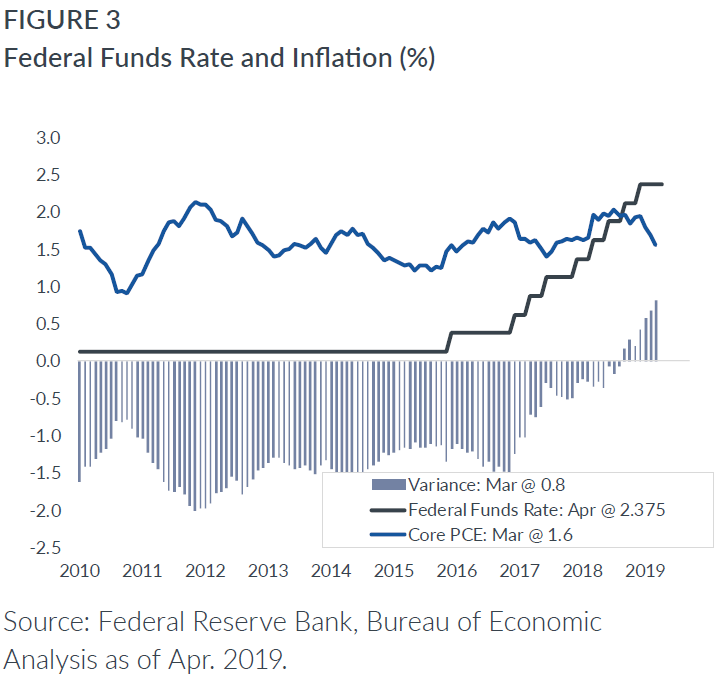 Hiring rebounded strongly in March. Payrolls jumped 196,000, which was a welcome relief following the February’s lackluster report, where they increased just 33,000. Back in early March, when the February labor report was released, there were growing fears of a cooling economy. Since then, a number of economic reports have shown the economy to be on solid footing, most notably the Q1 GDP report that showed growth of 3.2%.

The unemployment rate held steady at 3.8%, just 0.1% above this cycle low of 3.7%, which occurred in September. The underemployment rate, a broader measure of those who are not fully employed (those who are unemployed, have had their hours cut back due to a weak economy or have given up looking for a job), stands at 7.3%, one of the lowest levels in its history (see Figure 4). 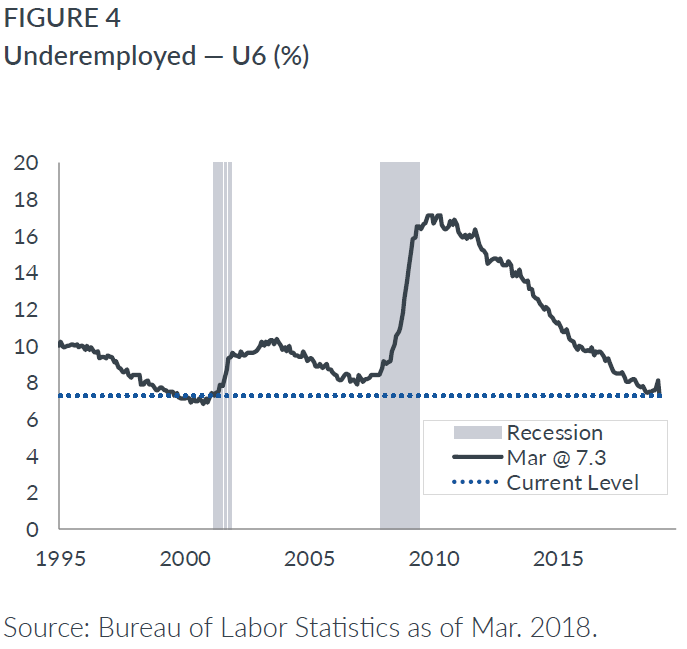 Back in July, the yearly change in the Fed’s preferred inflation index was up 2.04%. It had pierced just above the 2.0% target for the first time since 2012, the year the Fed began targeting inflation. Since July, the metric has drifted down to 1.6%, equal to the average inflation rate for this decade (see Figure 5). Persistently low inflation has been a thorn in the side of the Fed and almost all major central banks.

The Fed is getting concerned. Despite a very low unemployment rate and a healthy economy, inflation is not moving up. Having a higher level of inflation leads to higher interest rates, which provides the Fed with more in changing interest rates to manage monetary policy.

The Fed seems to be moving toward a “price level targeting system.” This is a deviation away from the fixed target of 2.0%. This new framework looks to have an average of 2.0% inflation over a long period of time. With inflation under that level for a while now, the Fed is likely to keep monetary policy easy so that inflation can get above 2.0% for a spell and lift the long-term average up to 2.0%. But the Fed is facing an uphill battle, as inflation has been falling since the 1980s. There has been a global structural shift, with supply outpacing demand. This has been brought on by globalization, the diminished bargaining power of workers and, more recently, the Amazon effect. All of these issues are beyond the realm of monetary policy. 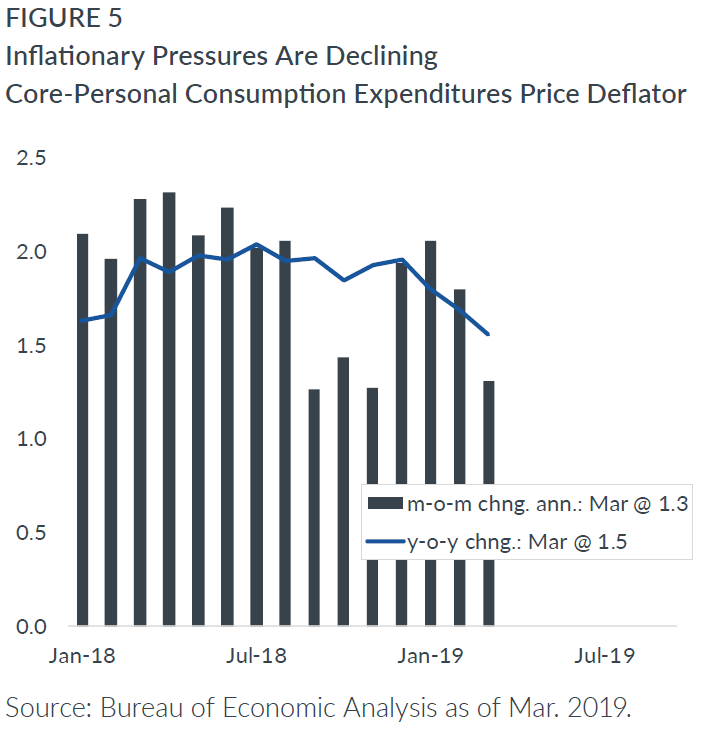 Petroleum prices have rallied 56% from their recent low in late December (see Figure 6). Demand has picked up this year with the brighter economic outlook, and OPEC+ (OPEC and Russia) has been trying to manage supply to help push up the price of their major export.

In the past week or so, the price has jumped to $63.91 due to the administration’s decision to terminate the waivers for buying Iranian crude. This past autumn, the United States re-imposed sanctions to put pressure on the government in Tehran for their “pursuit of nuclear weapons.” Shortly after that, they granted waivers of those sanctions to a handful of countries — including China, which has complicated our relationship with them. The waivers expired on May 2.

The sanctions appear to be working. Prior to them being imposed, Iran was producing around 3 million barrels per day (bpd), but in April, that was down to under 1 million bpd. The administration would like to bring that number down to zero. The U.S. could help fill that void. In 2018, U.S. production increased by 1.6 million barrels a day and is rising further this year. 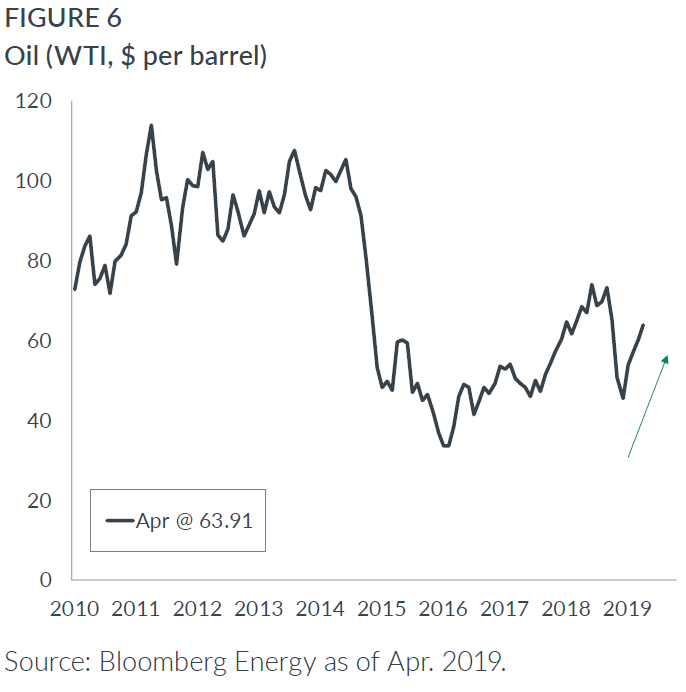 The reason why inflation has been low has more to do with issues beyond the Fed’s control.

The Fed is facing an uphill battle, as inflation has been falling since the 1980s.

Petroleum prices have rallied 56% from their recent low price in late December.